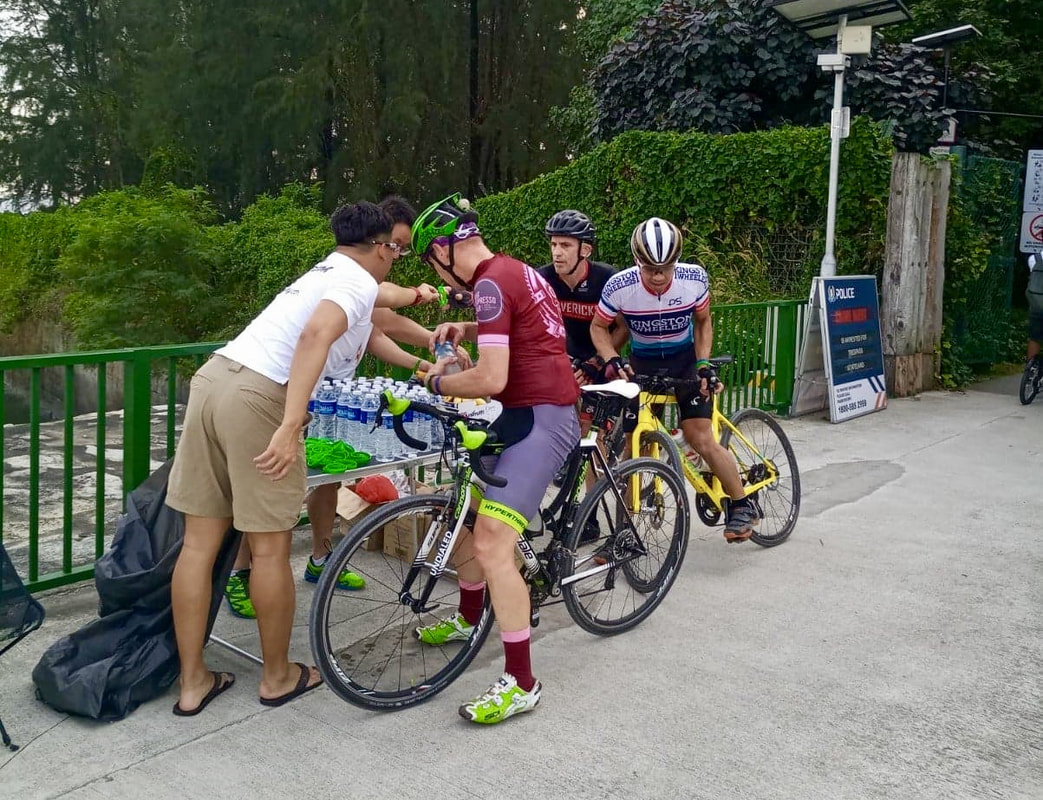 Checkpoint #2 at Coney Island, one of five points the X Rally riders had to visit (Photos courtesy of Cyclocross SG)
August 21, 2018
Something completely different hit the local cycling scene last Sunday in the form of the X Rally 2018, a multi-terrain adventure which took its participants on a 90km trip around eastern, central and southern Singapore.

It was the latest in a steady stream of events over the past few years that have helped transform what was a stagnant local cycling scene into a vibrant one. The roadies have been kept happy with the URA-CFS Criteriums, the OCBC Speedway Challenge, time trials, races around horse racing and karting tracks, and even a pair of car park climbs, while the off-road aficionados have enjoyed a steady diet of Jungle Cross events at Turf City, plus the occasional race at Kent Ridge Park and the annual Singapore Cyclocross SG Open.​

What made yesterday’s inaugural X Rally (pronounced "cross rally") unique was that it was an event that catered to both road and off-road cyclists. It was predominantly ridden on tarmac, but participants were also tasked with negotiating sections of beach, gravel, single-track trail, railway sleepers and leg-punishing steps. 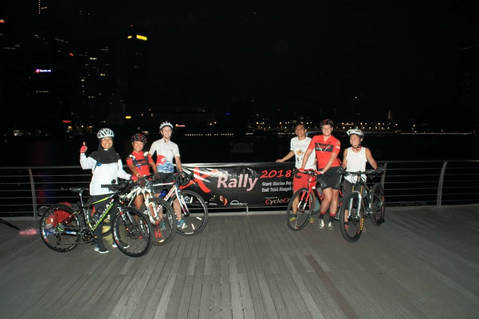 The small field of ladies prepares to start
While most of the course could have been covered on a road bike, albeit with a fair bit of getting off and pushing, the prevailing choice for the 100 or so riders who turned up at Marina Bay Sands (MBS) for the 6am mustering on Sunday was a cyclocross bike. A sizeable minority brought along mountain bikes, though, including one gentleman on a 36er (who knew such a huge-wheeled machine even existed?!), and at least one fat bike was also in the start pen.

The field also represented a good cross section of the cycling community, with experienced racers and weekend warriors joined by rookies and people just out to have a good time. The one negative would be the gender imbalance with the men vastly outnumbering the women, but the problem of attracting female participants seems to be one most cycling events in Singapore struggle with.

The Spectra deck overlooking the bay outside MBS provided a spectacular backdrop as the riders listened to the final briefing, with the illuminated city skyline shimmering in the sky and the water. ​
Singapore Cycling Federation general manager Mahipal Singh performed the ceremonial flag-off, with the ladies rolling off first, followed by the 40+ men, then finally the Under 40s men. While officially a non-competitive event that stressed road safety, participation and simply completing the task over speed, the organisers from Cyclocross SG put up token prizes for the first five riders to finish in each of the four categories.
​
In keeping with the community vibe, there were no race numbers on jerseys or timing chips on bikes to help record the progress of the “competitors”, instead each rider had on his or her wrist the first of six coloured wristbands that needed to be collected at checkpoints placed throughout the route. Distinctive directional signs were posted throughout the route, although one or two more at certain junctions wouldn’t have gone amiss.​

The first leg of the X Rally saw the participants head through the Gardens by the Bay, over the Marina Barrage and into the East Coast Park. It was at the end of the park near the National Service Resort and Country Club (NSRCC ) that the first off-road test awaited the riders in the form of a 200-metre stretch of beach. The tide was high so there was only a thin strip of wet sand to ride on, making what was for many of the participants an already unfamiliar task even more challenging. Sand slide/ride done, the first checkpoint awaited on the park connector outside the NSRCC. As well as the essential wristbands, it and each of the subsequent checkpoints were catered with bottles of water and bananas.

The Men's 40+ category contained the biggest field
The course then headed up the wide-open and windswept straight of the Tanah Merah Coastal Road, where brute strength and good drafting skills were the key requirements. The route continued on the tarmac through Changi Village and Pasir Ris, before heading onto the gravel of Coney Island via the Lorong Halus Wetlands.  The path that dissects Coney Island is only 2.3km in length and consisting of hard-packed gravel, it looks deceptively fast, but a series of ruts, bumps and shadowy potholes made it a jarring experience. ​

The second checkpoint was stationed at the far end of the island and from there it was the Punggol park connectors and the roads of Seletar, Yishun and Mandai as the course headed for what was undoubtedly the highlight of the course, the Track 15 and Chestnut mountain biking trails. The entrance to T15 held the third checkpoint and then it was straight into the jungle. T15 is a mixture of dirt, rocks, roots and broken concrete that twists, turns and undulates for 4km. Then it was straight into some of the myriad of trails that make up Chestnut North, before a steep tarmac climb brought the riders to another off-road treasure, the Belukar Track.

​In all, the combined off-road sections from Mandai Road to the exit at Rifle Range Road totalled 9km in length. 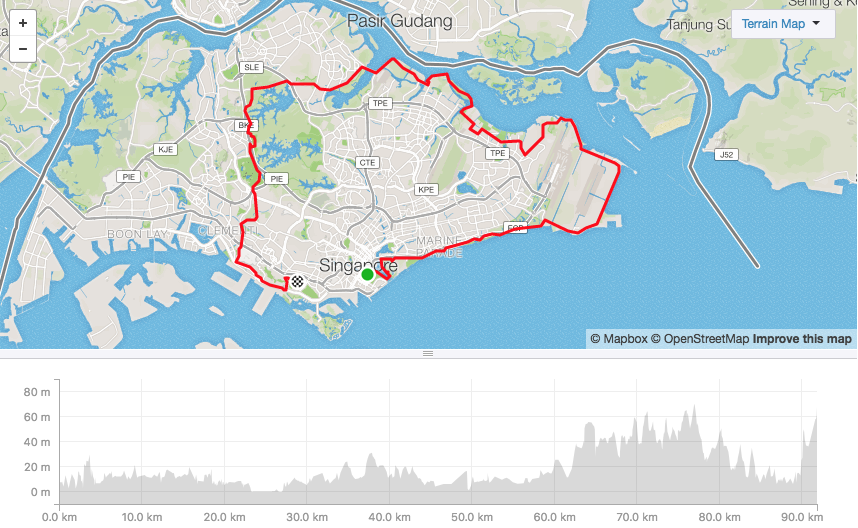 The X Rally 2018 route
The next off-road challenge was a 2km section of the Green Corridor, including a set of old railway sleepers, and then it was back to the open tarmac of Ulu Pandan, Clementi and Pasir Panjang roads to Haw Par Villa and the fourth checkpoint. The final dash towards the finish line at Telok Blangah Hill Park involved a previously-unknown-to-most trail in Gillman Barracks that led to the bottom of what looked like an endless stack of steps. ​

After cycling 90km in hot and humid conditions (the rain thankfully stayed away), tasking the riders to carry their bikes up a stairway to hell was a particularly clever/cruel inclusion by the organisers. And then for a final twist, after conquering the steps and emerging out of the woods, the riders had to remount and climb a vertical ramp of 15 percent to the finish line. The ice-cold water and beers that awaited the finishers were very welcome, as were the shaded gazebo and spectacular views from the top of the hill.
The first three riders (all from the Men's 40+ category) completed the task in around 3 hours and 13 minutes, with the rest of the field arriving in dribs and drabs over the next couple of hours; all exhausted but all extremely satisfied with their day’s work.

The man behind the X Rally 2018 was Arnold Yeo, who also runs the Cyclocross Singapore group. He was delighted with how the day panned out.

“Awesome. Remarkable. Something that has provided motivation to do more and so we’ll see you next year,” said Yeo, who designed the route and with a dedicated team of volunteers pulled off the event successfully.​

“On a usual weekend basis I ride similar trails and a similar route to this X Rally and so I guess I came up with the idea of having a simple event so that I can get everyone together and today has proved it can work,” he said. 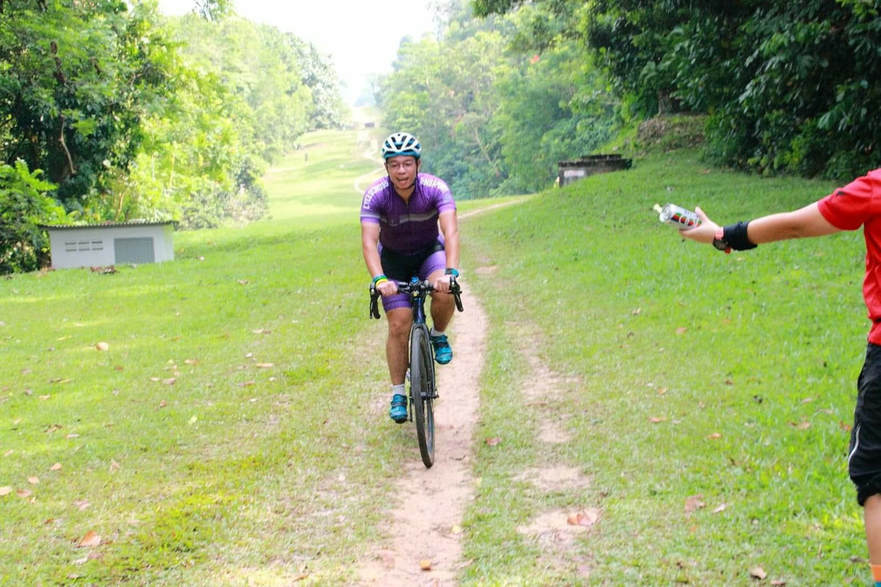 The end of the Belukar Track marked the conclusion of a 9km-long tough off-road stretch
The X Rally 2018 riders too were full of praise, including the first woman home, Anna Symms (MatadorRacing), who has lots of cyclocross experience back home in England.

“It was good, well organised by the guys and a great day out,” she said. “I’ve never done anything like this before. In the UK I race normal cyclocross races which are just like a circuit race and you just go for 40-45 minutes all out. So this is the longest I’ve ever been on my cross bike.”

“I liked the concept, although I think I’d have preferred more off-road in there, but obviously you’re working with what you’ve got in Singapore, but the concept as whole was great. It was a good mix of different surfaces. The sand at the start was pretty interesting and it was definitely lots of fun going down T15.” ​

“And you know it was really inclusive for everyone. There was a massive mix of people here, and it’s really good just to get people doing events. Hopefully we’ll get more girls racing as well in future.”

Some of the prizewinners having a laugh post-race
2018 Singapore Cyclocross National Champion Tan Bin Chye also chimed in with his approval of the event.

“It was superb. Holding something like this more often and getting more people would be great,” Tan, who was the second overall rider home, said. “Compared to a road race or cyclocross race it was totally different. I’d prefer this type of event to a normal, short CX race any day,”

“My favourite parts of the course were the trails definitely, for sure, T15 especially. T15 was really fun, I don’t ‘race’ on a trail very often, and I don’t think there are many races that go through their anyway, and so it was very different. It would be really great if they could close the trails and a have a proper race through there.”​

To turn the X Rally into an official race would probably be difficult due to the logistical and financial difficulties in securing road closures, but perhaps a way of making it fully competitive in future would be to just time the off-road sections, similar to enduro mountain bike racing. But even if the format remains the same for future editions, there is definitely room on the calendar for the X Rally. 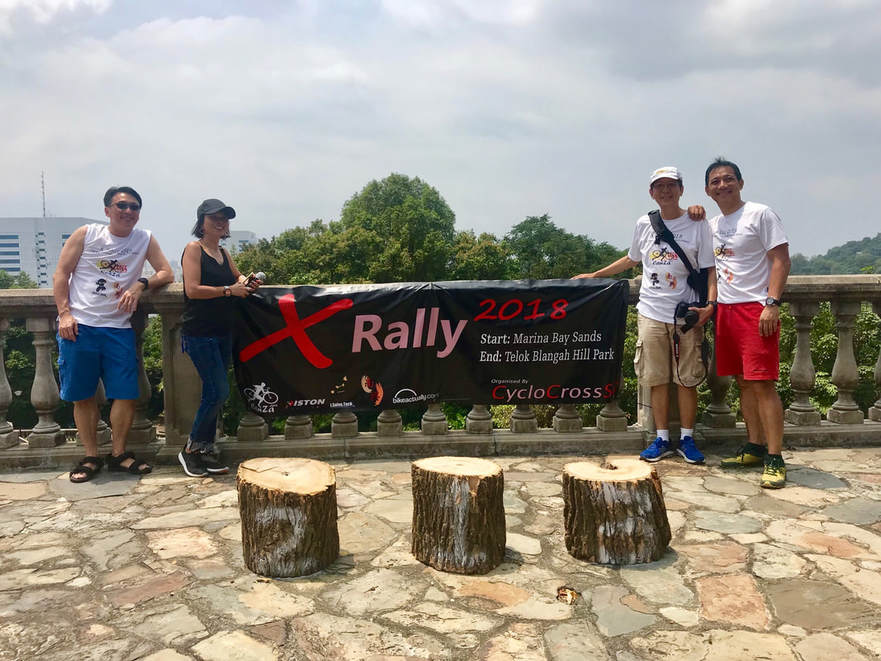 X Rally 2018 chief Arnold Yeo (far right) with some key members of his team atop the Telok Blangah Hill Park finish zone
For loads more of information about Sunday's X Rally 2018 visit the Cyclocross Singapore website or check out their Facebook page.

​But there’s more cyclocross action coming up this weekend with the third leg of the 2018 Jungle Cross series at Turf City. The CX event kicks off at 8:02am, and the cyclocross course has been vastly improved, with less riding in the root- and jump-filled jungle ravine and a greater emphasis on cyclocross-specific skills. There’s a brand new sand pit, more barrier jumps and a spiral on the grassy playing field section. It would be great for the sport of cyclocross in Singapore if the riders who turned up in numbers for the X Rally also considered coming along to support Jungle Cross. Click on this link for full details and how to enter Jungle Cross III.
X Rally 2018 Podium Placers
Proudly powered by Weebly