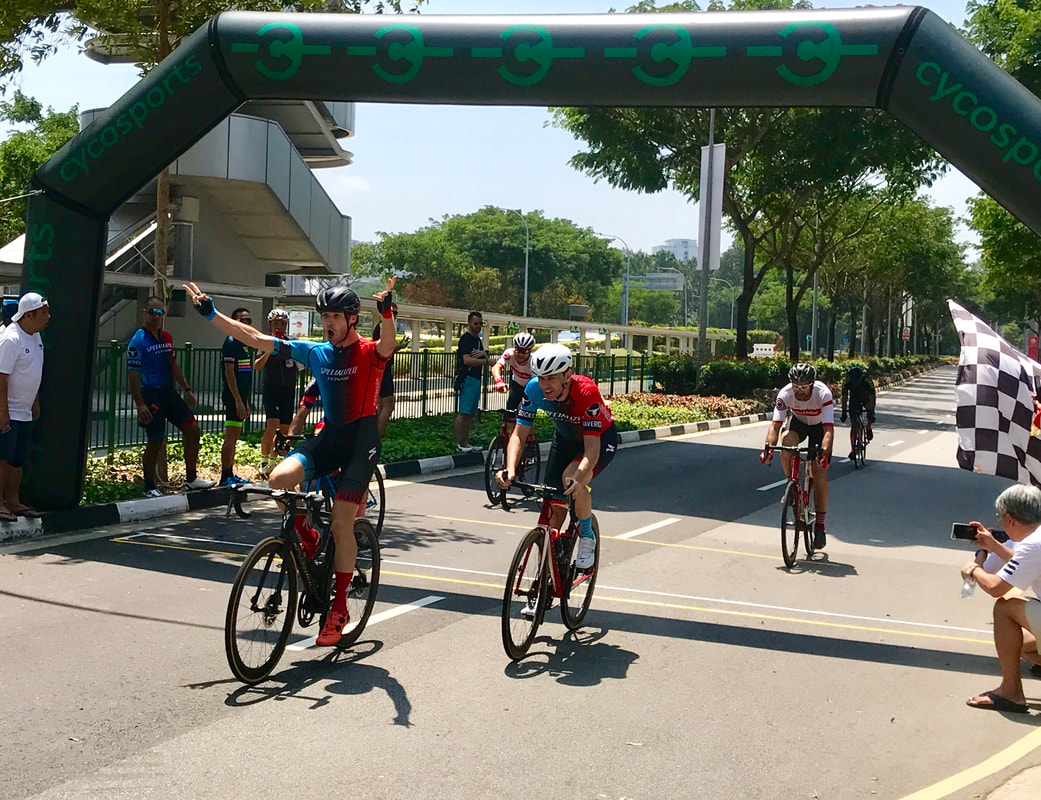 August 20, 2019
The SCF Challenge @ Sportshub returned to the criterium circuit at the Singapore national stadium on Sunday and after 25 thrilling rounds of action, Victor Michel (Specialized Roval Mavericks) and Chelsie Tan (BikeLabz) were crowned the points racing king and queen.

Sunday’s superb morning of racing was the second of a new four-date series that is the SCF Challenge @ Sportshub. Run by the Singapore Cycling Federation and events kingpins Cycosports, the series is a no-frills competition put on for the local cycling community but with heavy involvement of clubs and teams within that community.

The inaugural SCF Challenge @ Sportshub in June was sponsored by Anza Cycling and on Sunday for Round #2 it was the turn of the Integrated Riding club to stump up the logistical costs associated with closing a portion of the road at the national stadium. As well as earning the gratitude of Singapore’s road racers as a return on their investment, Integrated Riding got to choose the format for Sunday’s event, and they opted for a “points race”. 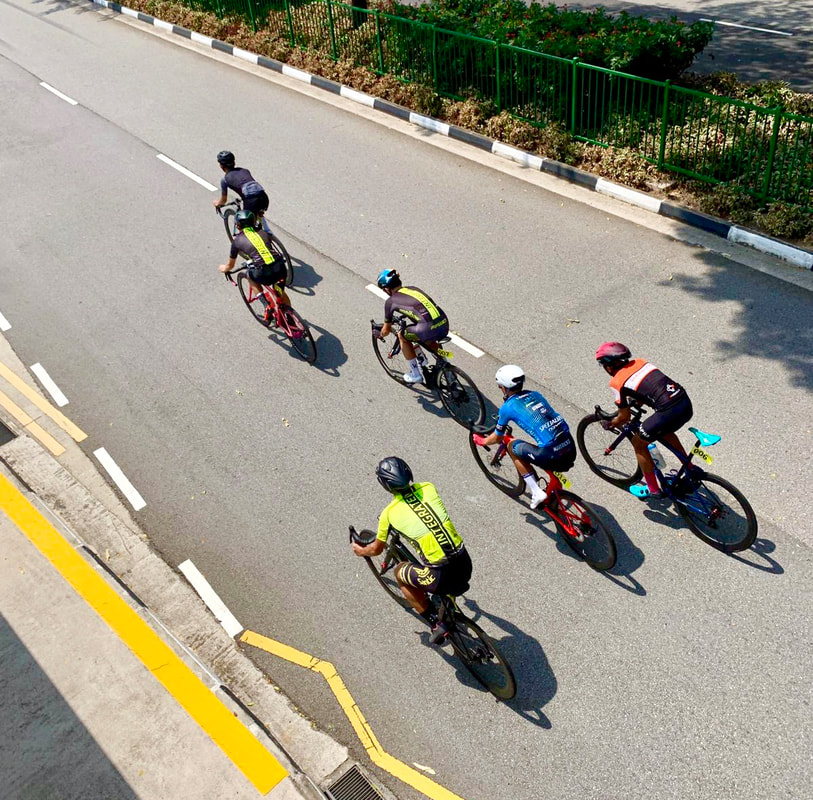 The exciting Junior B final was one of the most closely fought contests of the day
Rather than just have the first man or women across the finish line take the win, a points race offers intermediate sprint points throughout the contest, with the winner being the rider who accumulates most points. A staple of track racing, the sprint points usually come every five or 10 laps of a velodrome circuit, but for yesterday’s racing at the longer national stadium crit course, points were awarded each time the competitors crossed the start/finish line.

The 25 rounds of racing on Sunday were spread across seven separate categories: Junior A, Junior B, Men’s A/B grades, Men’s C/D grades, Men’s E grade, Women’s B/C grades and Women’s D/E grades. Each race consisted of just four laps of the 1.25km circuit, but with the four finish line sprints plus the efforts coming out of the turns at either end of the hotdog circuit each time round, a lot of energy was burned during every one of the contests. The first three finish-line sprints offered 4, 3, 2 and 1 points, with double points for the last lap.

The Men’s A/B and C/D grade competitions involved quarter-finals, semi-finals and a final, both Junior categories and the Men’s E grade race had semi-finals and a final, while the two women’s contests were straight finals. ​Aside from a few short administrative and safety breaks, the races took place at 10-minute intervals so the action for the big crowd of racers and supporters was virtually non-stop from 7am through till midday. 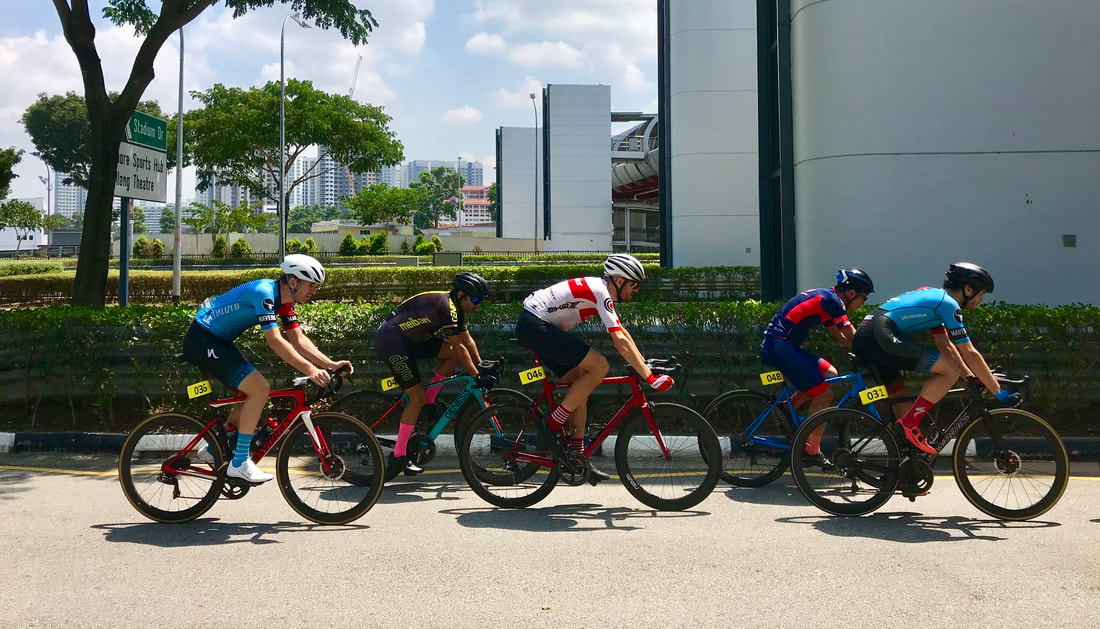 The A/B Grade finalists kept close tabs on each other
​That last contest on the track at midday was fittingly the Men’s A/B grade final. It contained a crack field of six riders: Michael Naert and Roman Barbier (both MatadorRacing), Andrew Philippou (Integrated Riding), Keiichi “Dr Avocado” Hayashi (Allied World Treknology 3), and Michel and Nick Swallow (both Specialized Roval Mavericks). That those riders represented six different countries (Belgium, Andorra, Australia, Japan, France and Britain respectively) was a nice illustration of the multi-national flavour of the Singapore cycling scene. The home nation might have hoped to be represented too, but pre-race favourite Boon Kiak Yeo (CyclingTraining.CC) crashed out in the semi-finals.

Just getting to the final was an achievement as each of the six riders had to finish among the top three in their respective quarter- and semi-finals. Some of the finalists had enjoyed a fairly straightforward route by scoring consistently in their previous rounds, but others had advanced thanks in part to the big last-ditch efforts to secure some of those precious double points.

Indeed, that double points kicker had played a significant role in many of the races throughout the morning, and it proved to be a popular element with both the racers and the spectators. Would it be a factor in the men’s final too?

Unlike many of the previous rounds of racing which featured splintered fields, the elite final was a much tighter affair, with none of the six riders given much leeway to escape. So fittingly it came down to who was the best sprinter. Michel showed his hand early by taking the first sprint handily, and the Frenchman followed that up with second place on round two. Crossing the line first again on lap 3 gave him a nice buffer, but due to the double points rule, four riders were still in contention for the win as the bell sounded; Michel had 11 points, Kayashi was on 8, Naert on 6 and Barbier on 4. 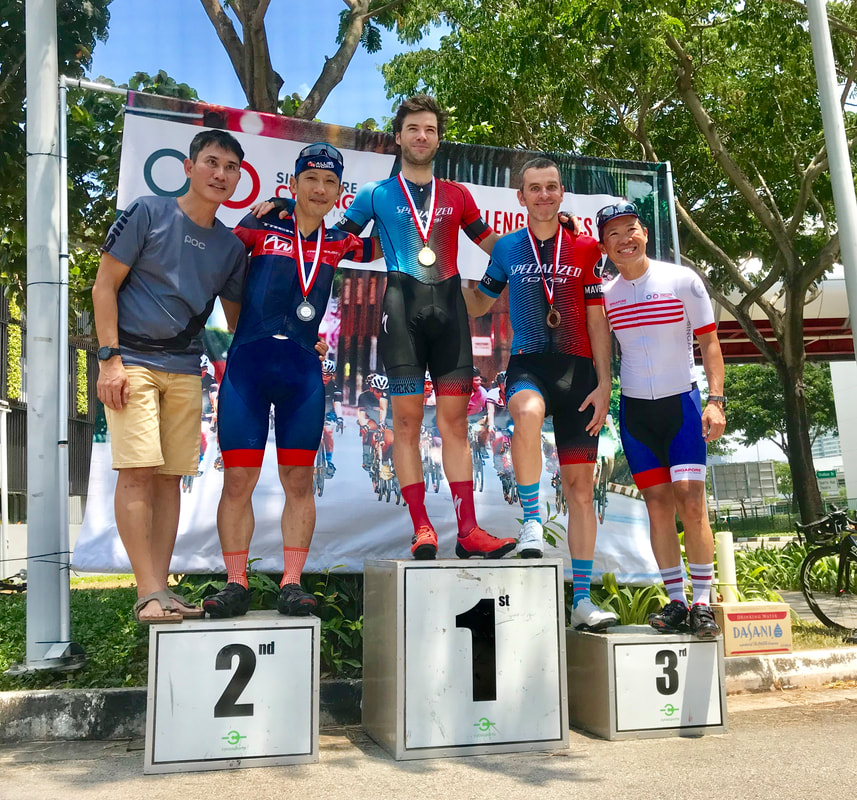 The top 3 in A/B grade final joined by Integrated Riding main man Thiam Sing Lim (left) and SCF President Siong Hing (right)
​Swallow had been pointless to this stage, indeed he’d finished dead last on each of the first three laps, but heading into the final turn, the Englishman shot to the front with the intention of trying to gobble up points in case his teammate floundered. He was still at the front as they exited the roundabout into the 250-metre finishing straight but rather than flounder, Michel latched onto Swallow’s wheel and enjoyed the perfect escort before nipping out at the death to cross the line first for a dominating triumph. He scored 19 points out of a possible 20.

Consistency paid off for Hayashi, who by never being lower than third on any of the sprints accumulated 12 points and second place on the standings.. The final step on the podium went to Swallow, whose six points for second place on the last lap put him into a three-way tie with Naert and Barbier, but he took the medal on the countback rule.

“I’m very pleased with this victory. I think the team worked very well together in the quarter-finals, the semi-finals and the final, and Nick was a very good asset for the win,” Michel said post-race, with the Frenchman adding that it felt extra special as it was his first individual triumph in the colours of the Specialized Roval Mavericks.

​“I’ve had a few podiums for the team, but it’s the first time I’m going to stand on the highest step for the Mavs. I’m very blessed to be with the team, the boys have really helped me improve over the past year and a half since I joined.”

“I liked the race, it’s a very good format, although it would be even better if it was a tiny bit longer, maybe like 10 laps and maybe just count the points on every other lap. But I understand we have to support the whole racing community. It was great organisation and there’s a great ambience here today. Thanks Cycosports and SCF.” 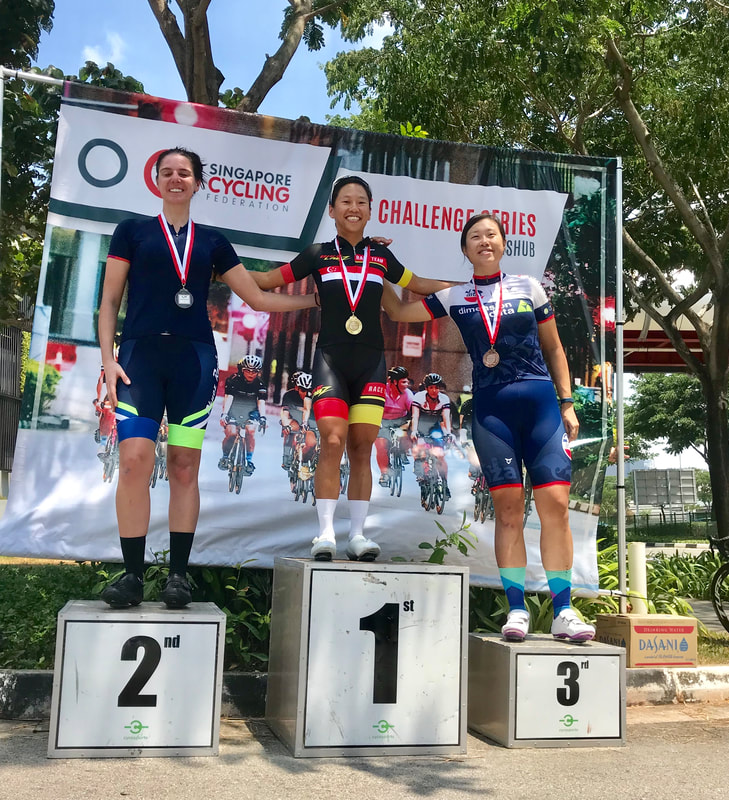 This was another exciting race, but was more of a two-horse affair as Chelsie Tan and Younan just seemed to have that little bit extra power than the other four women. Each of the four sprints had a similar outcome with the Australian and Tan coming into the finishing straight with a gap on the rest, Younan would then launch first, but Tan had enough in the tank each time to come round for the line honours. So a clean sweep for the 2019 national champion in her first race on home soil since winning the title last month. A finely timed sprint by Nicolette Tan from the chase group on the final lap saw her take third place and the four points earned gave her a total of eight and the final spot on the podium.

Post-race, Tan said she was delighted to have won but also a tad relieved.

“I feel very happy to have honoured the jersey by winning today. It was a very proud moment to race in the colours of the national champion. But wearing it brings a lot of expectations and I needed to deliver a good result, so I’m happy I did that,” Tan said. “I loved the race format, it was very challenging. You have no time to rest, no time to think, all you have to do is go at your very max on every loop.” 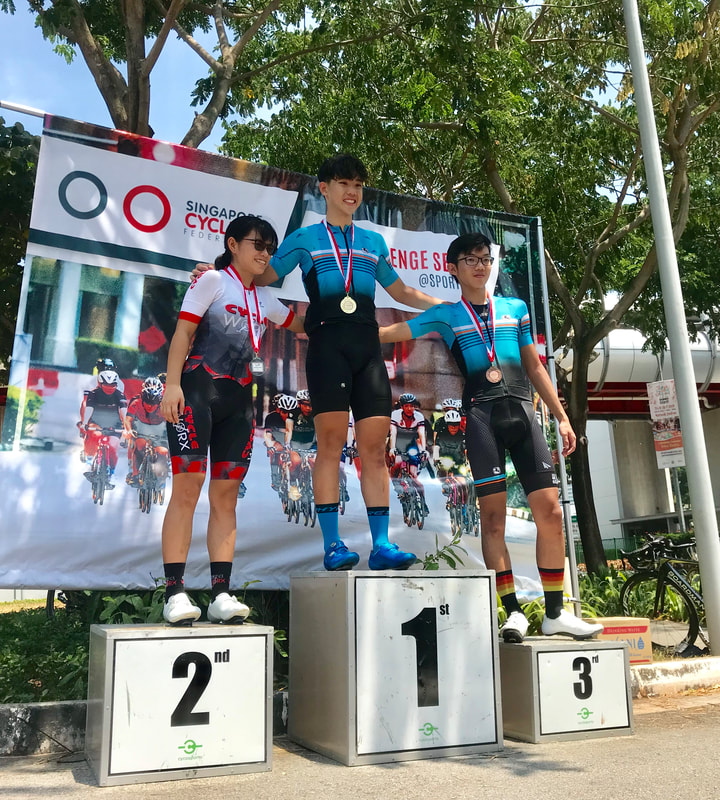 The Junior A podium, including Elizabeth Liau who was only beaten by one boy, the champ Samuel Leong
Earlier, Samuel Leong (RADstation) took the Junior A (17-18 Years) win, but special mention to the runner-up Elizabeth Liau (Team Cycleworx) for beating all the other boys. Dylan Sim took third place.

The Junior B (13-16 Years) title went to Billie Mah (Integrated Riding), who pipped his teammate Jude Lee Pillai by a single point, with Mohammad Syaheed Ismail (Team Harding in third).

The Men’s C/D grade champ was Kevin Chin, with the AGR2-La Mondiale-clad rider taking the clean sweep. Grade A/B for Chin next time out then?  Shun Ming Cheong (Garcia Test Team) was the runner-up, with Jeremy Mok in third.

The Men’s E grade final was won by Ben Khoo (Team B Racing), but he left it late, taking the win by one point from Gavin Tan thanks to the double points for the lap 4 win. Taketoki Isobe (Team B Racing) was third.

Last but not least, the Women’s D/E grade contest had a dominating champion in Gaelle Mogabure (Not My Boyfriend’s Team), as the Frenchwomen took all four sprints by a clear margin. Second place went to Amanda Chew (Integrated Riding), with Ekaterina Naryshkina (Integrated Riding) in third.

The SCF Challenge @ Sportshub series returns to the national stadium circuit next month, with Cycleworx being the sponsor for Round #3. The format will take the shape of "elimination races", so it’s sure to be another exciting Sunday morning at the races.

For full results of last Sunday’s event go to this www.cycosports.com link.
Proudly powered by Weebly