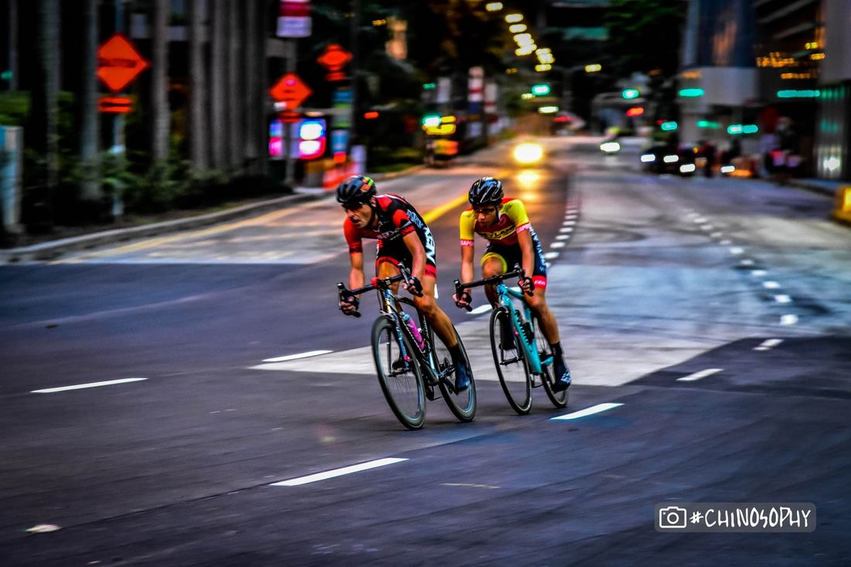 The local youngster must like the downtown Singapore street circuit as he won the last time he raced on it in October 2017, when he claimed victory in the Inter Educational Institute contest also from a two-man breakaway.

Part of the Car Free Sunday initiative, which sees a large swathe of the CBD closed to vehicular traffic, the URA crit has proved to be a big hit with the local competitive cycling community since it made its debut exactly a year ago. This was demonstrated again on Sunday as the first edition of the 2018 series attracted a bumper crowd of racers and spectators.

Despite the racing community only being granted 90 minutes to race by the Singapore authorities, organisers Cycosports have refined the URA-CFS crit concept so well that three separate races were held on the 1.7km Cecil Street/Robinson Road circuit on Sunday. 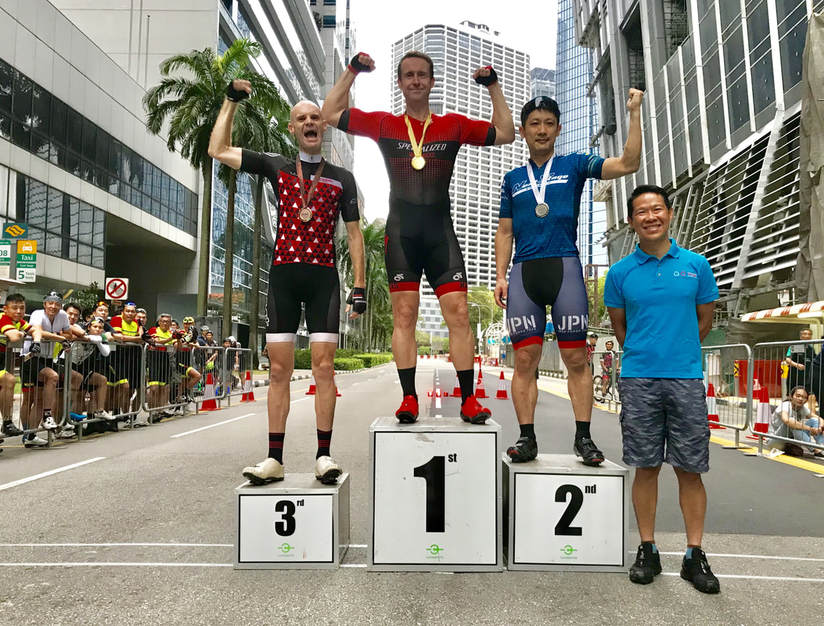 The Super Masters started the morning's action with Matt Lodge taking the win
The Super Masters and Masters contests were the first two engagements on the program, and a pair of thrilling races won respectively by Matt Lodge of the Specialized Roval Mavericks and Pierre-Alain Sherwey of Allied World-Kemp Technology set the scene perfectly for the main event, the Men’s Open.

Dawn was just breaking as the hooter sounded at 7am unleashing a 56-strong bunch containing most of Singapore’s top racers plus a few overseas visitors for their 10 laps of anaerobic effort.

Comprised of two long straights connected by two sweeping u-turns, the circuit is a super fast one, where the first riders into each corner don’t have to touch their brakes. The pace was hot from the off but none of the early attacks in the opening two laps managed to get any real breathing room for the aggressors. 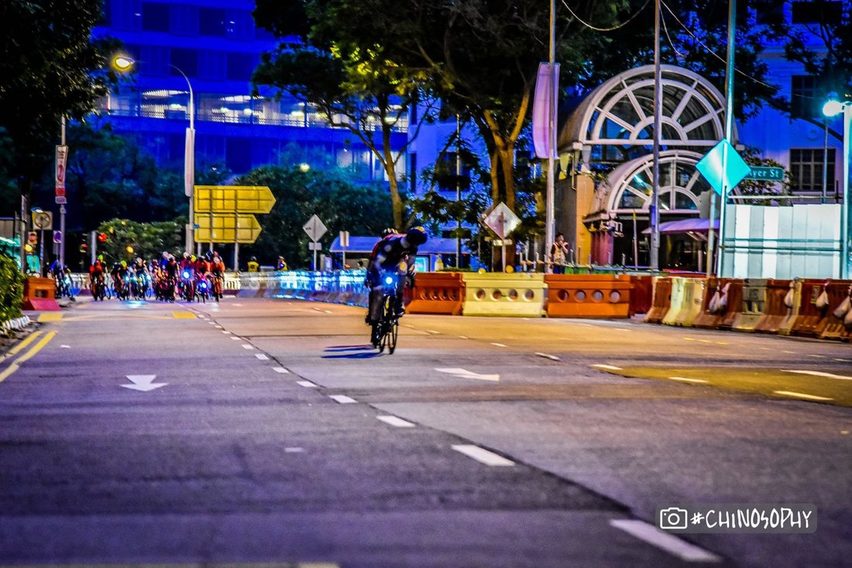 The break escapes (photo courtesy of Wai See Chin)
On lap three, though, three riders did manage to escape the clutches of the peloton. Comprised of Krisna, Fast and Ben Farnsworth (Matador Racing), the trio quickly opened up a lead of some 10 seconds. The gap stayed roughly the same for the next few laps, and even when Farnsworth dropped out of the lead group around the halfway mark, the remaining pair, mostly driven by the powerful Russian Fast, managed to increase their lead over a bunch that couldn’t seem to organise a cohesive chase.

The most significant attempt at bridging the gap was initiated by Ben Arnott (Specialized Roval Mavericks) and a rider from Rapha CC. Their surge got them halfway between the leaders and the peloton and when local track superstar Mohd Elyas (Cycleworx) jumped across to join them, the excitement levels on the sidelines went up a notch at the prospect of a five-man fight to the finish.

But the riders in the main bunch finally got their act together and after reeling the trio in, looked set to chase down the leaders too. 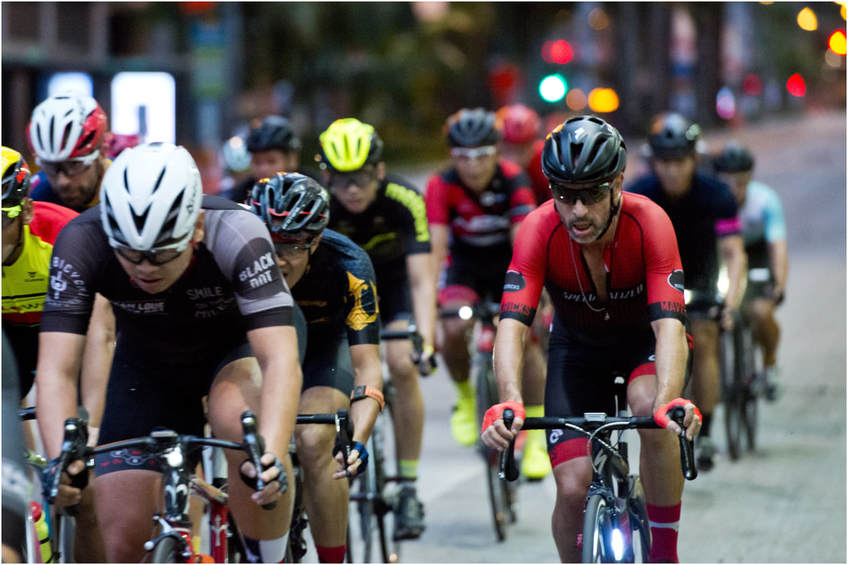 The peloton charges at last (photo courtesy of Samuel Zheng)
Indeed, with two laps to go, the first cracks in the Krisna-Fast express had begun to appear as their lead dipped below 10 seconds. But after one more loop around the circuit and through the line for the bell, the leaders had somehow increased the gap again and looked set to battle for the win between them.

As Fast – a veteran of the Southeast Asian racing scene – and Krisna rounded the far corner for the last time signalling about 900 metres to go, the peloton kicked into top gear fuelled by a some ferocious pulls on the front from former Singapore national riders Kee Meng Ang and Jun Rong Ho.

However, it was still Fast and Krisna that turned first into the Cecil Street finishing straight marking 300 metres to the line. The strung-out bunch were just seconds behind them into the turn but it was a case of too little too late as the two leaders launched their sprints.

It was Krisna who claimed the win, with Fast having no answer for the 21-year-old Geylang rider’s devastating final kick. The winning time was 22 minutes and 28 seconds, which represented an average speed of over 45kph! 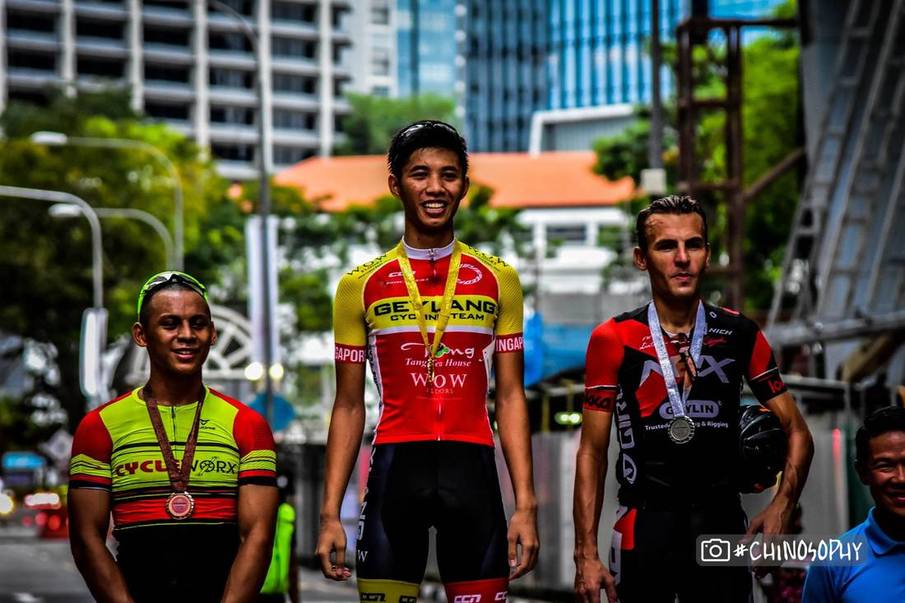 Post race, Krisna was understandably delighted with his victory.

“It’s my first win in an Under 23/Open race. I won here last October but that was in the Inter Institution race,” he said.

“I felt good so I just like took a gamble and hoped this one was the right move to join the break. So I just followed him (Fast) and we worked together very well. But then I just had to follow him as much as I could because my thighs were burning. And so in the last lap when he tried to open the sprint I just followed him for about 200 metres and then I opened my full gas, overtook him, and was happy to take the win,” a smiling Krisna said.

“I like this race, yeah it’s a fast course, really smooth corners, I like it, it’s my favourite crit. Crits are my favourite,” he said.

Krisna also revealed that his next race target is a big one.

“The national champs, the road race (in July). I’ll stay here for the local road races and local crits and maybe if I get more opportunities we’ll go to the international crits, like in Malaysia where I can try my best,” he said. 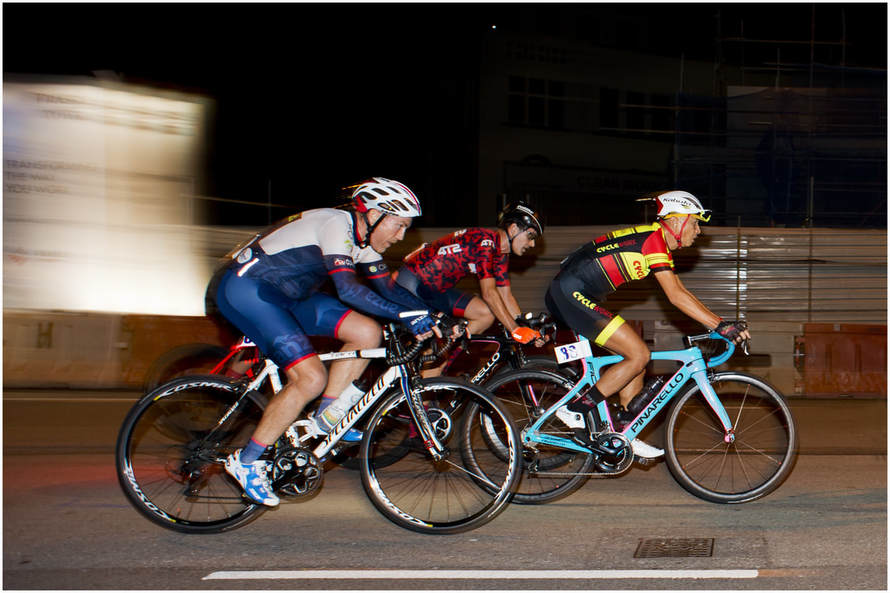 The Super Masters lit up the CBD course first (photo courtesy of Samuel Zheng)
While the elites ended their contest in the full light of the day, the Super Masters started the morning’s action off at 6am on a circuit illuminated by street lights. Super Masters races are restricted to riders aged 45 and up, but readers shouldn’t imagine a bunch of old uncles pottering around the circuit. Super Masters racing can be just as intense and nearly as fast as the elite races.

Sunday’s 10-lap Super Masters contest saw all the early attacks come to nothing until Lap 7 when a move containing five riders finally managed to break clear of the main bunch. Matt Lodge (Specialized Roval Mavericks), David Strooper (Matador Racing), Mark Jansen (4T2) Keiichi  Hayashi (Team Next Stage) and Peter Bennett (Allied World-Kemp Technology) made up the quintet, and with all five having teammates back in the peloton able to hinder a cohesive chase, the winner was set to come from the break.

The swelling crowd of racers getting ready for the next two contests no doubt expected a sprint finish, but Lodge thought differently and launched a long-range effort just after the bell. The unexpected tactic from a man normally known as a sprinter worked … just!

The Welshman opened up a big gap on Robinson Road but as he rolled out of the last corner into the finishing straight he was rapidly running out of gas. He dug deep, though, and just held off the fast-charging runner-up Hayashi. Strooper pipped Jansen for third, with the main bunch some 20 seconds further back.

Next up at 6:30am was the Masters race, for riders aged 35 to 44. An epic battle was expected as the big field contained a number of “name” racers.

But it appeared that one of those big names, Pierre-Alain Scherwey (Allied World-Kemp), didn’t fancy an epic battle rubbing shoulders amid a 40-strong bunch as he and Benedikt Schneider (Matador Racing) shot to the front midway through the first lap and were never seen again. 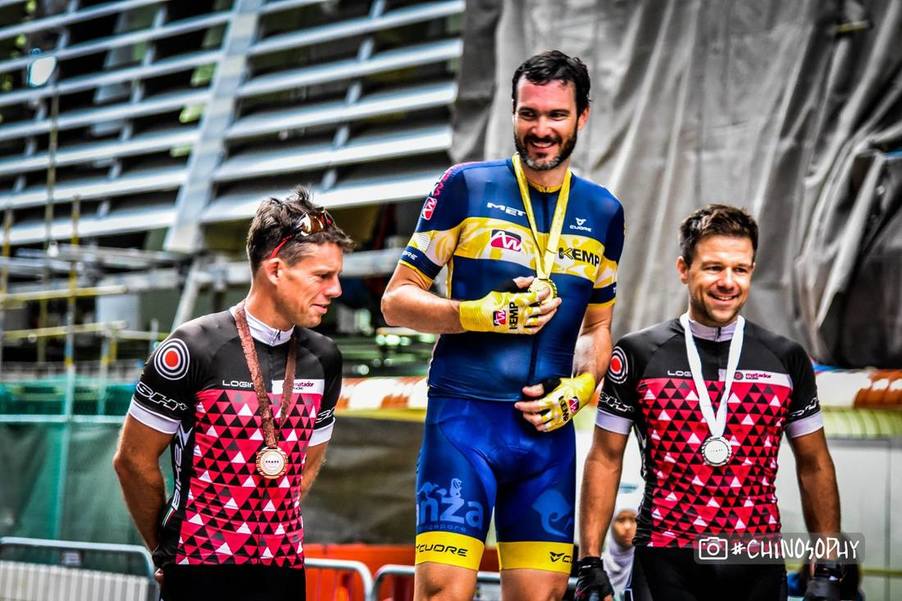 Allied World's Scherwey flanked by two Matadors on the Masters podium (photo courtesy of Wai See Chin)
The pair set a blistering pace and steadily increased their lead lap by lap. The gap by the halfway point of the race nearly stretched the whole of Cecil Street, meaning only a crash could stop either Scherwey or Schneider from taking the win.

After having worked well together for the entire 10 laps, it was fitting they were side by side in the sprint with just 10 metres to go. But it was the big Swiss Scherwey who had the most in the end, taking the win by less than a wheel. The winning time was 23 minutes dead, just 30 seconds slower than the elites.

Some 30 second behind, it appeared like the whole bunch was still together as a heaving mass tore down the finishing straight striving for third place. Rick Dumpleton (Matador Racing) proved the strongest, emerging out of the mob to claim the final spot on the podium with a perfectly timed effort to pip Sophiane Behraoui (Allied World-Kemp).

The URA-CFS Share the Road Criterium will return in conjunction with the next Car Free Sunday on March 25. With most of Singapore’s hardcore racers set to be away at the Tour de Bintan that weekend, Cycosports have slated Men’s Sports, Women’s Sports and Juniors as the categories to contest the three crit races in the March edition.