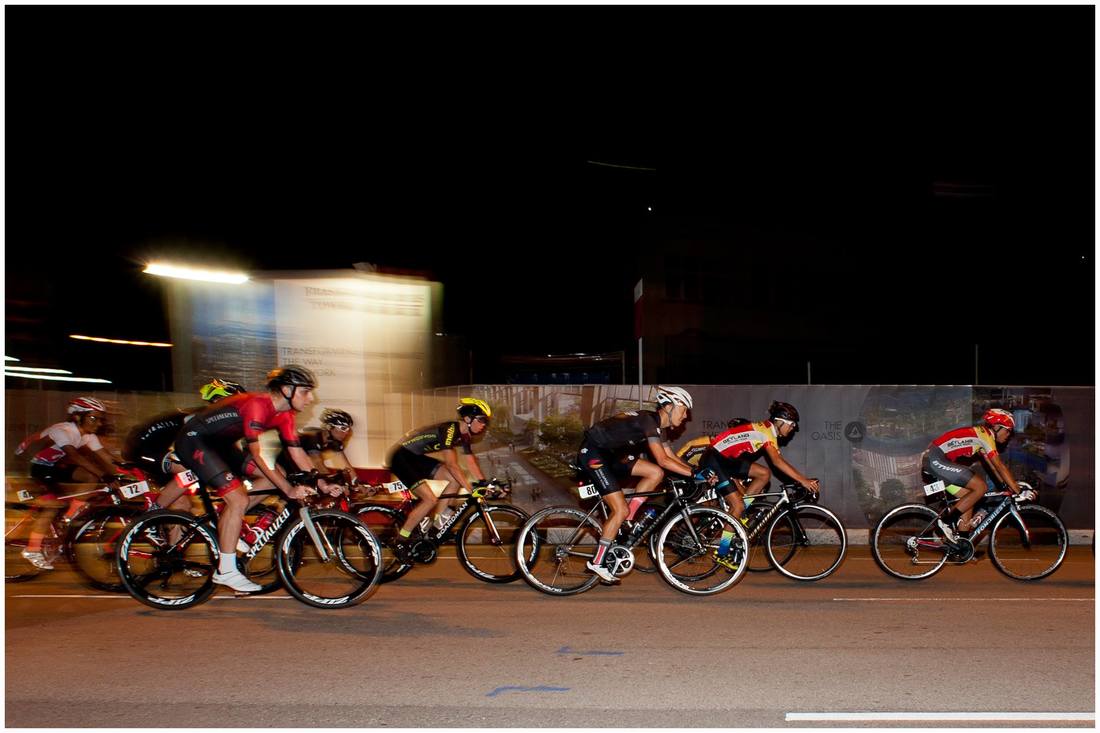 All photos courtesy of Samuel Zheng/Cycosports

October 30, 2017
There is no doubt that the URA-CFS Share the Road Criterium series has provided a huge boost to the Singapore road-racing scene in 2017. And fittingly yesterday’s final leg in this year’s series was the best of the bunch, as three races showcasing a diverse range of demographics drew a big crowd that was rewarded with a thrilling morning of action on the CBD circuit.

The criterium series started on an experimental basis in January after local cycling events outfit Cycosports and the Singapore Cycling Federation (SCF) managed to get approval from the Singapore Urban Renewal Authority (URA) to stage a race as part of the URA’s Car Free Sunday initiative. This not-quite-monthly event sees a large swathe of the Singapore central business district closed to motorised traffic, leaving cyclists, runners, walkers, skaters and scooter aficionados to roam freely around a roughly 6km circuit of roads slap bang in the middle of town. It has proved hugely popular. 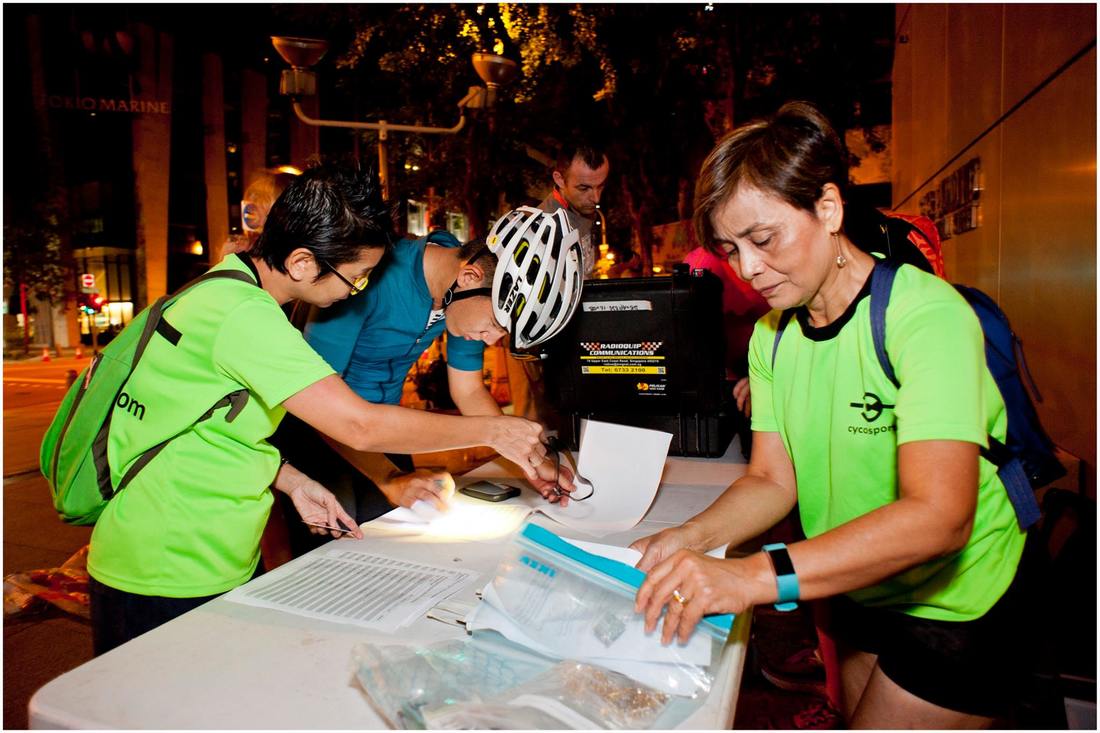 The dedicated volunteers at Cycosports were up well before dawn to get the registration desk open at 5:30am
Ideally, the URA-CFS crits would be held on the full circuit and in broad daylight, providing a spectacle for the Car Free Sunday community, but cycling in Singapore always seems to have to battle for small gains, and so Cycosports and the SCF had to accept what they were offered: a strict 6am-7:30am time slot on a 1.7km circuit, well away from the main Car Free Sunday activities, which kick off at 8am.

The racetrack is a cracker, though, encompassing a hotdog layout on Cecil Street and Robinson Road linked by two sweeping U-turns that barely dampen the speed of the marauding racing bunches.

Faced with the logistical constraints, Cycosports has squeezed in two or three races into each of the six editions of the URA-CFS crit, with Men’s Open, Masters and SuperMasters, Juniors, Women’s Open, Paracyclists and Team events all getting their turns to race.

For the final race-day of the 2017 series, Cycosports mixed it up again with three brand new formats; the Inter-Educational Institute race, the Men’s Open Points Race, and the Women’s Beginners race. 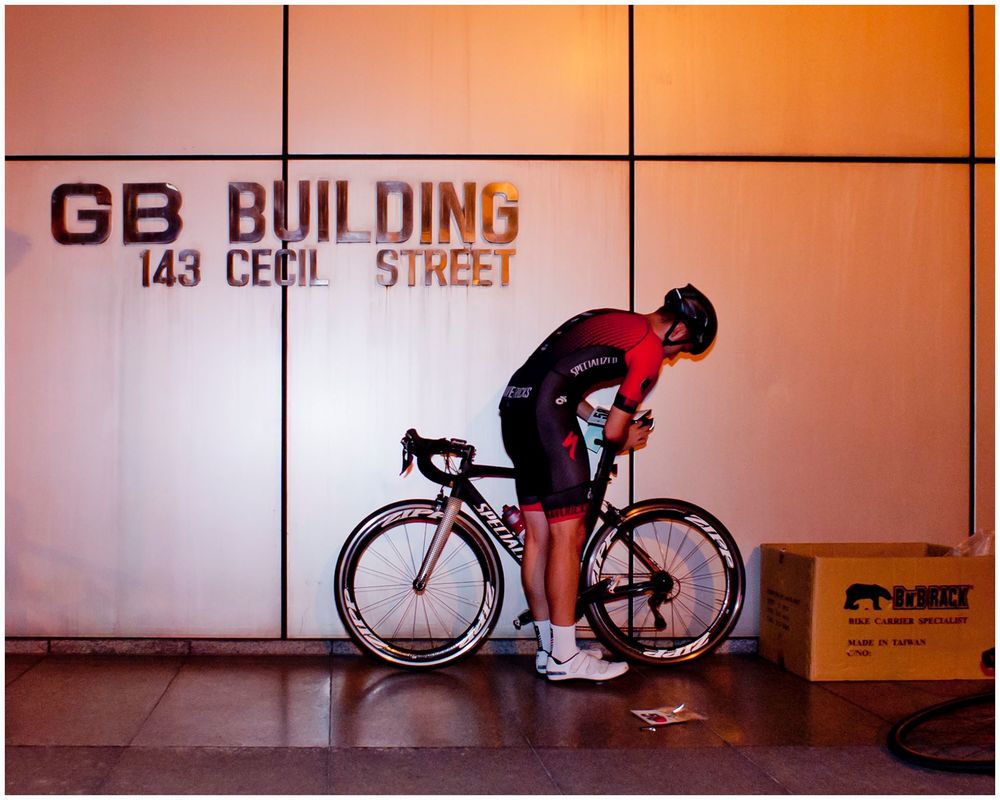 Race days means pinning numbers to jerseys and onto bikes
Inter-Educational Institute Race
The first contest was open to any person studying at a Singapore high school, university, college or polytechnic and it attracted a top-quality field featuring some of the country’s best young racers.

Two of them, Joel Foo (Singapore Management University) and Ghazzi Krisna (Nanyang Polytechnic), shot off right from the 6am gun and by the time the duo had completed the first of the race’s nine laps, they had already opened up a 10-second lead.

The 30-strong peloton seemed content to let the leaders dangle out front for the first few laps, but this tactic saw the gap growing each time Foo and Krisna passed through the start-finish line.

As the big pack realized this, the chase intensified, but the necessary cohesion was thwarted by some canny work from Krisna’s teammates; while the racers were representing their educational institutes, many of the riders were wearing their cycling club colours, and Krisna had three of his Geylang Cycling Team in the bunch behind. 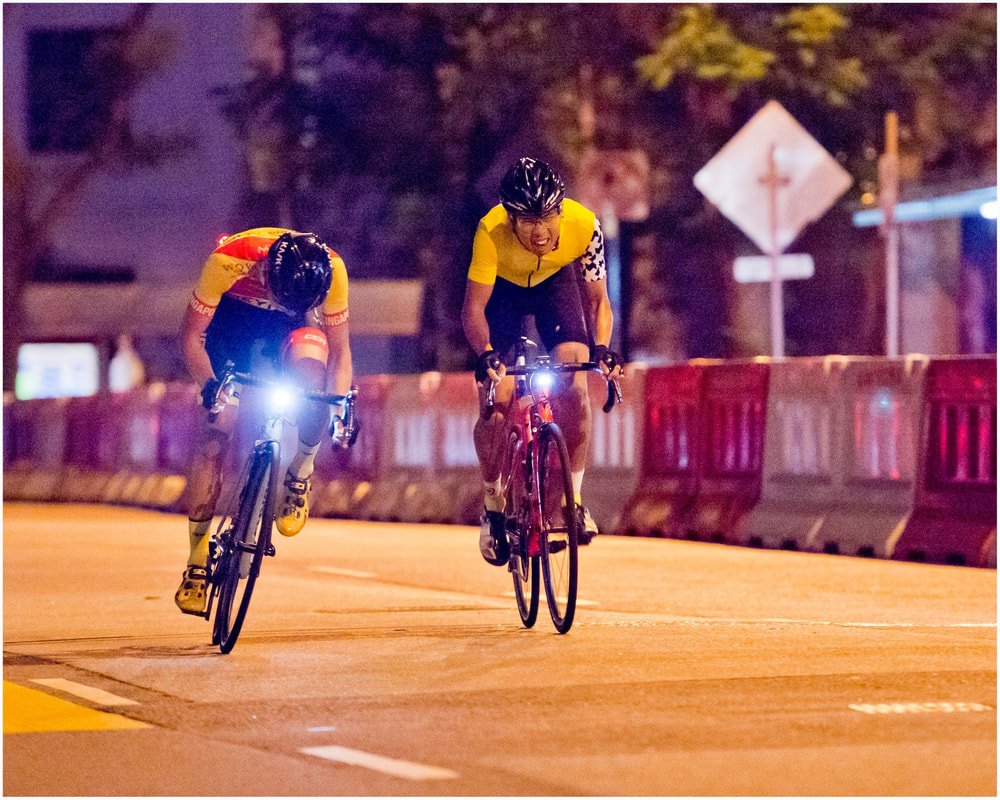 The pain on Joel Foo's face from just losing out in the sprint to Ghazzi Krisna is all too evident
With three laps to go Krisna and Foo had stretched their lead to some 25 seconds and the race looked over, but that lead was halved with two to go and was down to just seven seconds at the bell. Their brave effort looked doomed.

But Krisna and Foo had saved something for the final lap and it was the long-time leaders who emerged first out of the final corner and they still had the same gap as they bore down on the line. Krisna proved the strongest in the sprint and took a well-deserved win. Krisna’s brother Ghaffari almost made it a family-themed podium but he was pipped on the line by Riyadh Hakim (Singapore Polytechnic) in the bunch sprint for third. 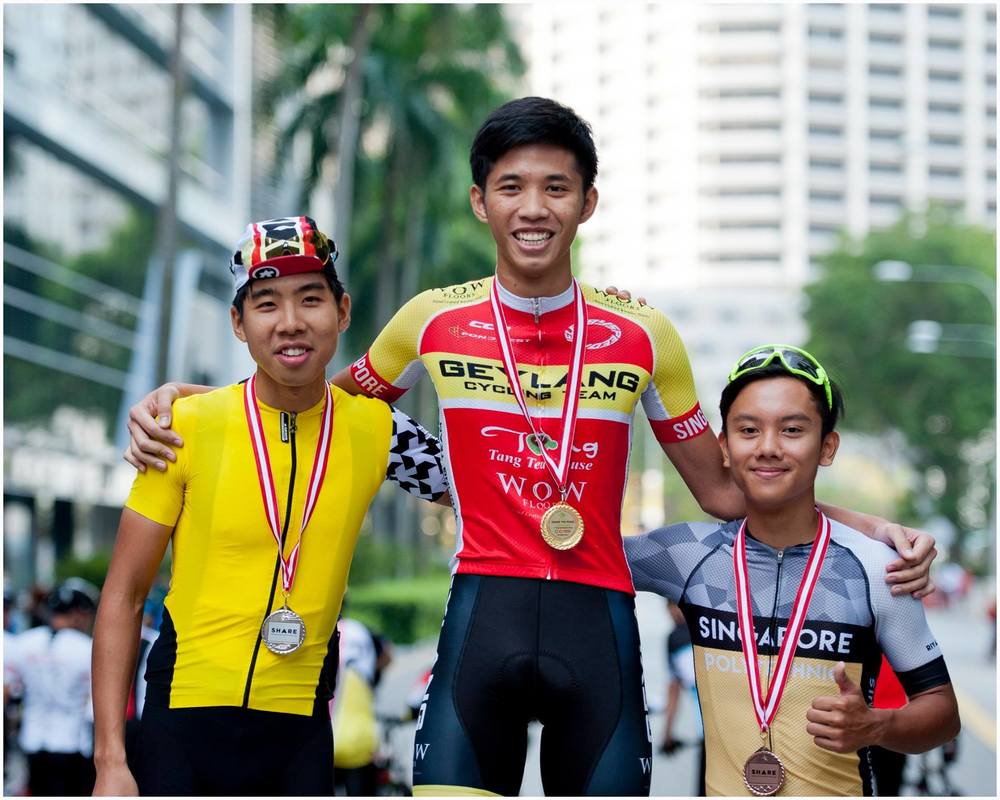 Three happy and very strong cycling students
Men’s Open Points Race
The students had put on a thrilling show and whetted the crowd’s appetite for the next event on track, the 10-lap Men’s Open Points Race. The format saw 5-3-2-1 points awarded for the first four riders over the start-finish line on each of the first nine laps, with double points for the last lap.

With such a short race and high calibre of cyclists, the pace was always going to be supersonic from the off, and it was two of Singapore’s young national team speedsters who lead the way on the first lap; Luqmanul Hakim (TWC) took the five points closely followed by SEA Games medalist Elyas Yusoff (Cycleworx), with the Specialized Roval Mavericks duo of Ben Arnott and Ruairi Brown completed the scorers. 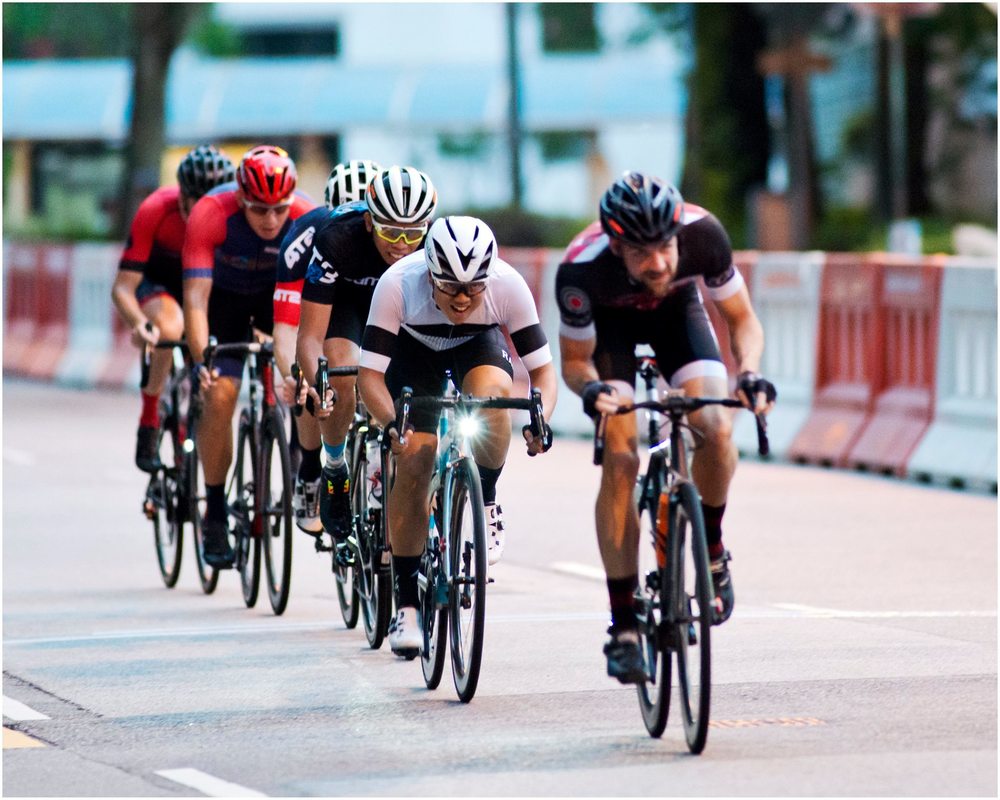 Daylight came half way through the Men's Open Points Race
But after the first lap the contest almost became a one-man show as another Maverick, that man Andreas Ostern, put in a scintillating performance. The Norwegian scored maximum points in three of the next five laps and added a three-pointer for good measure to build up a big lead.

A relatively quiet spell followed where Ostern only scored one point over the next three laps, but he then put an emphatic full stop on his masterclass by easily taking the chequered flag lap and the 10 points on offer.

His winning total was 29 points, with Luqmanul way back in the second place on 13 points. David Strooper (MatadorRacing) rounded out the podium, his 10 points earning him third place.

The average speed of just under 47kph shows just how intense the race was.

The always-ebullient Ostern was extra excited after the win and more than happy to share his post-race thoughts. 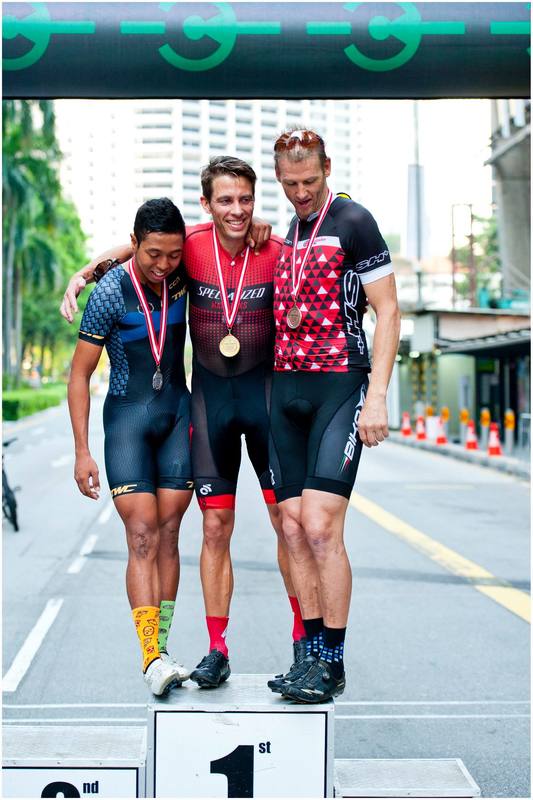 Share the Road, share the top step of the podium
“I’m very tired, but I have to say, riding with the Mavs, it’s just a pleasure. It was just a great morning out,” the Norwegian said.

“The race had a great format, really cool. I was attacking all the time, and just had to be on the alert into the corners, and really working hard, and of course working with the team, as everybody had a role to play. It was brilliant.”

“I tried to go hard on every sprint but I couldn’t, so on a couple I had to take a breather and position myself for the next one. When I took a breather, we just communicated and my teammates were free to go for the points.”

Ostern was especially effusive in his praise of his teammates on the last lap.

“It was a brilliant ride, going towards the last corner. Ben (Arnott) attacked on the long stretch then Basti (Dohling) was on his wheel, then Basti attacked and pulled me all the way through the corner to the line. It couldn’t have been better,” he said, although adding that in his hypoxic state he wasn’t certain that he’d won the whole Points Race at that stage.

“I wasn’t sure I had won, but I thought I had won it. I was very, very exhausted as I put out everything today and that was the last inch of muscle fibre I had crossing that line.” 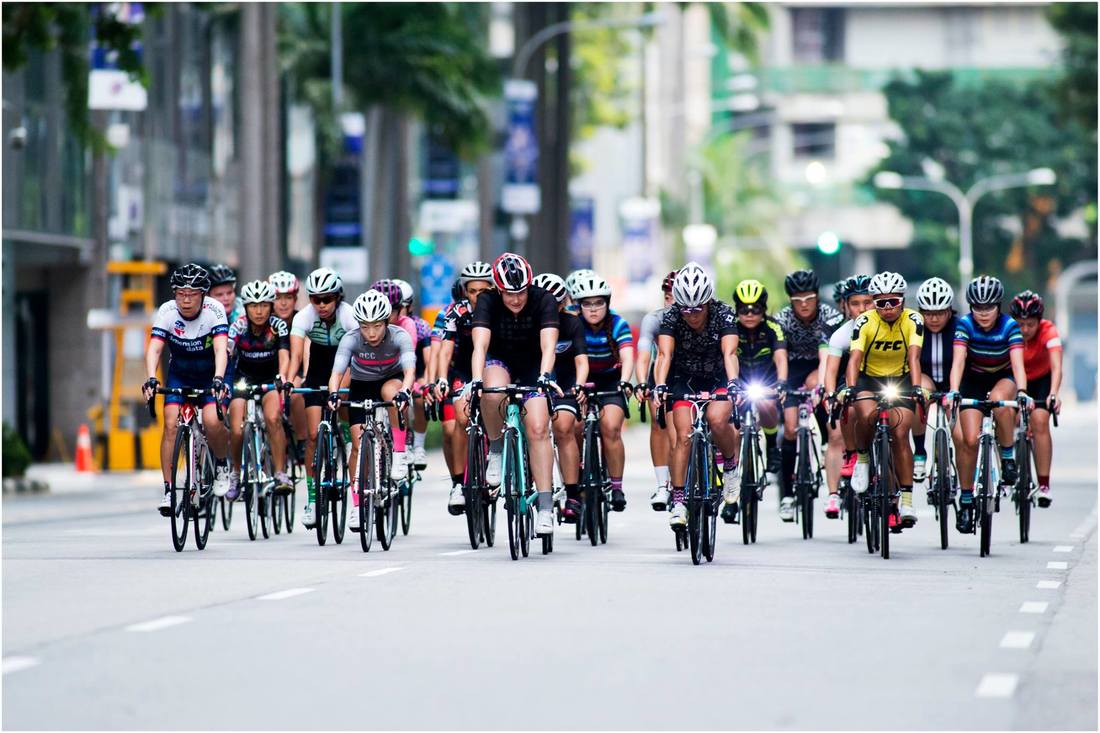 Singapore's women cyclists bossing the streets of the CBD
Women’s Race
The final contest on the race card was perhaps the most significant. Despite the numbers of female road cyclists growing significantly over the past few years, the sign-up rate for women’s races has been very low.

To address this problem, the SCF, Cycosports, and a host of sponsors, including Rapha Asia, Bikes n Bites, Specialized Singapore, Treknology3 Singapore, Fahrenheit Performance and Pure Sports Nutrition, supported a two-day Women’s Workshop Weekend. The first part featured a knowledge-and-skills session on Saturday at Jurong West Sports and Recreation Centre, and then the rookies were given their very own race on the URA-CFS race circuit yesterday.

Chaperoned by some of the leading lights of the local female cycling community, the 40 newcomers faced seven laps of the circuit. The first five laps were neutralised to give them a chance to properly acquaint themselves with the course, but then they were let loose for two laps of real racing action.

Swelled by the participants from the first two races, the crowd was by now the biggest ever seen at the URA-CFS crits. They enthusiastically supported the plucky participants and the ladies returned the favour by putting on an exciting finish. 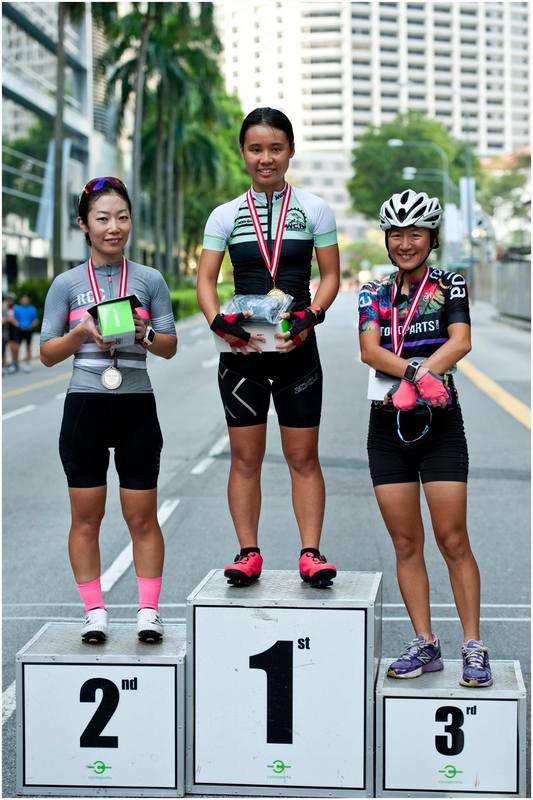 The first of many visits to the podium for these rookies perhaps?
A big pack of racers rounded the far corner, before Janell Ng (West Coast Rider) opened up a long sprint. She looked to be cruising to be victory but as the line approached, Ng tied up slightly at the same time as the fast-finishing Yukari Blest (Rapha CC) made her charge. They crossed the line together for a photo finish, which revealed that Ng had just held on for the win.

The final step on the podium went to the third-placed Grace Ng, but in the spirit of what was a landmark weekend for women’s cycling, prizes were handed out to the top 10 finishers thanks to the generosity of the sponsors.

Hopefully the newcomers will be hooked on bike racing now so that they return in big numbers when the URA-CFS Share the Road Criterium returns in January next year.

Hopefully too, the authorities can grant approval to widen the concept, by allocating more time for more races and perhaps even starting it in daylight so the wider Car Free Sunday can witness the spectacle of downtown crit racing.

For full results of yesterday’s races, go to www.cycosports.com.