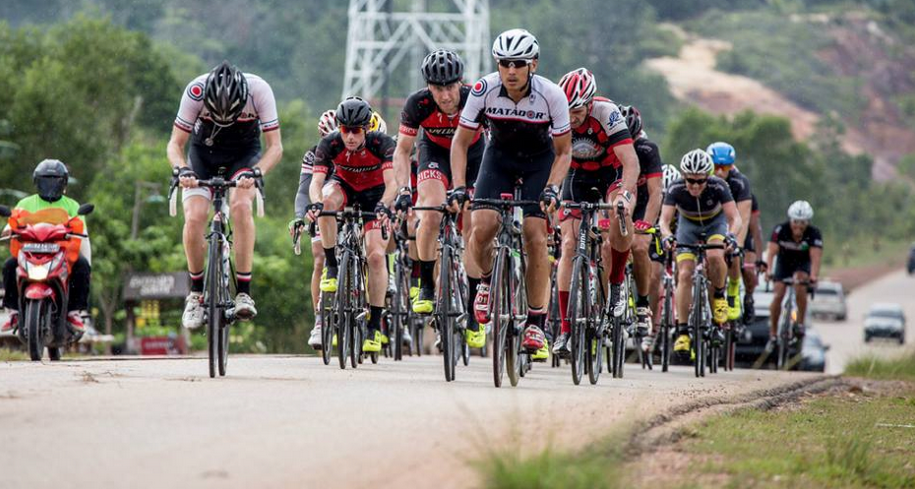 Batam, Indonesia
May 21, 2015
While certainly not as long as Milan-San Remo or as hilly as Liege-Bastogne-Liege, the Cycosports Tour de Barelang in its short existence has firmly earned its place as a one-day classic on the Singapore amateur road cycling calendar. Of course the irony is that this challenging one-day contest takes place not in the Lion City but on the neighboring Indonesian island of Batam.

Recognising the dearth of events in Singapore, Cycosports announced its arrival on the scene in 2013 and its concept of staging “local” events overseas with what they called the Batam Six Bridges race. It has since been rebranded the Tour de Barelang at the behest of the local authorities, but the third edition of the race held on May 16 is still the same event and without a doubt the most popular contest on the Cycosports calendar.

It’s only 134km long, a distance that a lot of Singapore roadies will cover on their weekend training rides, but a course of non-stop hills cutting through a starkly beautiful but completely exposed landscape sees the temperatures usually soar into the high 30s Celsius. This puts most of the racers out of their comfort zones, but still they flock to the Tour de Barelang in ever-increasing numbers. 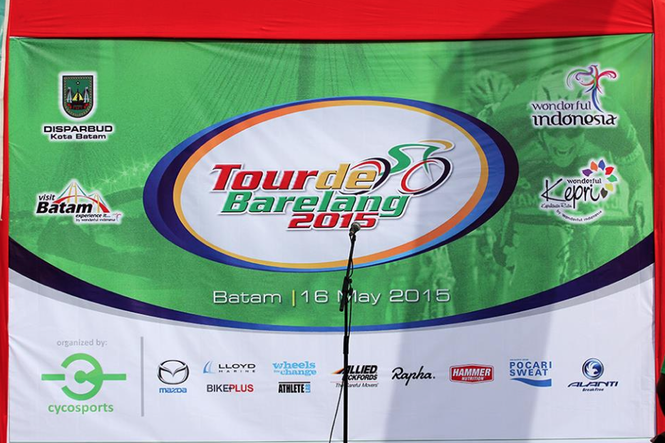 Some 250 riders assembled for the start of the 2015 race, with most making the day trip from Singapore, but a healthy number were local racers from Batam and other parts of the Riau Islands province. The sold-out Cat 2 and Cat 3 fields reached their caps of 100 well in advance. There was also a Cat 1 race for the elite riders and a Women’s contest, although the ladies started with the Cat 3 peloton as the low number of entrants made it logistically unfeasible to have their own race.Getting to the start line is part of what gives the Tour de Barelang its festive feel. Rather than ask their participants to book their own travel arrangements, Cycosports took the bold step of chartering ferries and instigating an all-in-one registration process for the inaugural edition of the race and have maintained this popular system ever since.

Before boarding the boats, Cycosports provide a streamlined checking-in and immigration process. The racers start gathering at Singapore’s HarbourFront Centre from 5:30am and after receiving their race packs and attaching their numbers to their bikes, hand their steeds over to a crew of dedicated baggage handlers. While the riders eat breakfast and make their way through Singapore Customs and Immigration, the bikes are loaded onto the ferries, with each frame protected by a blanket supplied by Allied Pickfords removal firm. 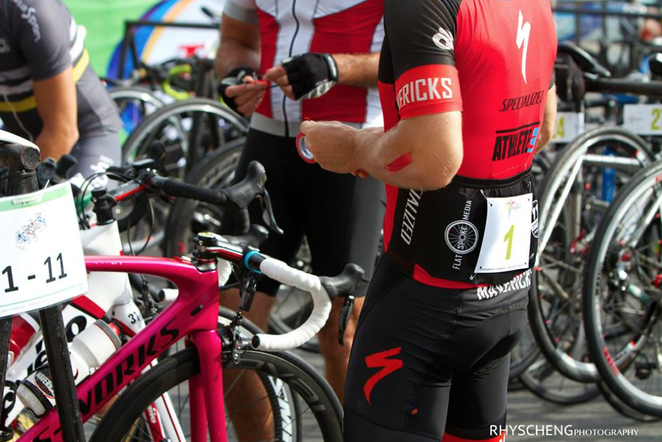 Numbered racks make it easy for the riders to find their bikes in the staging area
The atmosphere on board the boats is buzzing. With every seat taken by a racer, supporter or volunteer, the conversation is firmly centred on the day ahead.

Disembarking in the port of Sekupang is even more seamless than boarding in Singapore. Removing the bottlenecks that can occur on the gangways as individuals wait for their own bikes, the Cycosports system sees each rider grab a bike, any bike, which they roll through the ferry terminal to the race staging area in the car park, where numbered racks await.

Clearing customs and Immigration, so often a bureaucratic mess in Indonesia, is a breeze. The riders simply hand over their passports and arrival cards (which have been pre-filled by Cycosports) to a squad of immigration officers waiting on the dock; no lining up for visas, no queues to get passports stamped. 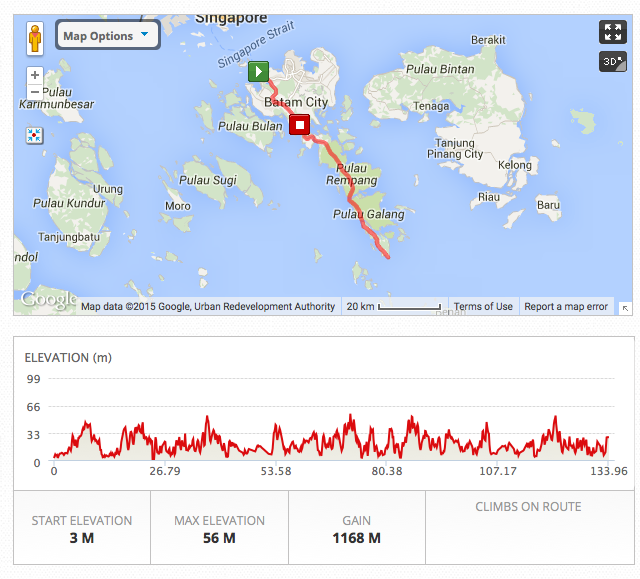 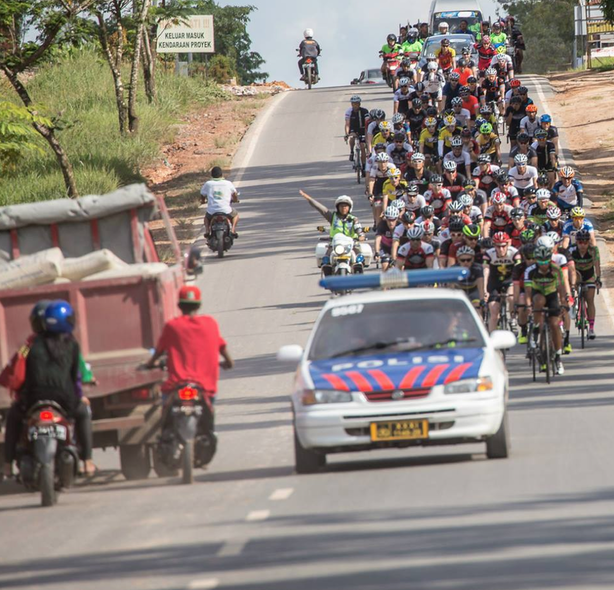 The Batam police keep the riders safe (photo: Tony Rose)
A throng of local media and support staff awaits the riders as they collect their bikes from the racks and make their final preparations to race. As timing chips are attached to forks and tires pumped up to the desired pressures, sponsors booths abound offering free-flowing Pocari Sweat isotonic drinks, bottled water, bananas and even some exotically Indonesian breakfast delights. It’s not a one-way process as the arriving riders from Singapore hand over bags of goodies for a charity drive that sees Cycosports support a number of children’s orphanages that sit along the route of the race.Amazingly, getting 250+ people off the ferries and ready to race takes just three quarters of an hour. And so at 8:15am local time, the action begins as the Cat 1 field is flagged off by one of the local dignitaries gathered in the start-line marquee. The Cat 2 contest starts five minutes later, with the Cat 3/Women peloton the last to leave.

While over 90 percent of the race takes place entirely on the Barelang Highway, getting to that wide, well-maintained and quiet road involves negotiating the hustle and bustle of Saturday morning traffic in busy Batam. This necessitates that the first 15km or so of the race is neutralized, with a police car sitting at the front of each bunch keeping the speed down, while a squad of motorbike cops rides ahead and clears a path by stopping the traffic at intersections. The police do an amazing job; if only the authorities in Singapore would consider this system of managed rolling road closures used for bike races all over the world, then the cost of trying to stage grassroots cycling events would tumble.

The relatively long neutral zone means no riders have any excuses about not being warmed up when the action begins in earnest. It’s easy to spot when the route has turned onto the Barelang Highway, as the first few hundred metres are lined with vendors selling everything that a visiting tourist could ever want. The highway stretches 60km southeast from this point, connecting Batam to a series of other islands – Pulau Taunton, Pulau Nipha, Pulau Setoku and Pulau Rempang, Pulau Galang and Pulau Galang-baru – before ending abruptly; it’s this sudden stop that sees the Barelang Highway sometimes referred to as “the road to nowhere”.

The mighty Barelang Bridge is the first of the six bridges that links the islands and is an impressive structure, its steep slopes and tall spans dominating the surroundings. A tourist attraction in itself, many of its non-cycling visitors can be seen looking amazed/bemused at the unexpected passing of large groups of cyclists on race day.

The Tour de Barelang ends on the bridge and the racers get a glimpse of the finish line as they cross the apex on the outward leg. From there, though, there are 110km to negotiate and the road is rarely flat.

For each of the three editions of the race, a tailwind has accompanied the racers on that outward leg, negating somewhat the severity of the hills. There are no big climbs on the route with the highest point of the whole race being just 56 metres. But the rolling hills come one after the other in an endless wave and the cumulative effect builds steadily in the competitors’ legs. Many of the riders might be unaware of this as they soak in the beauty of the surroundings. As the route extends away from the Barelang Bridge, signs of civilization are few and far between. Instead, the landscape is a mix of green forests, farms and plantations, rocky escarpments cut out of a mostly deep red soil and the contrasting shades of blue from the shimmering sky and seductive sea. While the ocean is never far from sight, the road more or less hugs the coast for the 15km before the u-turn, twisting and turning through the steepest hills on the route. 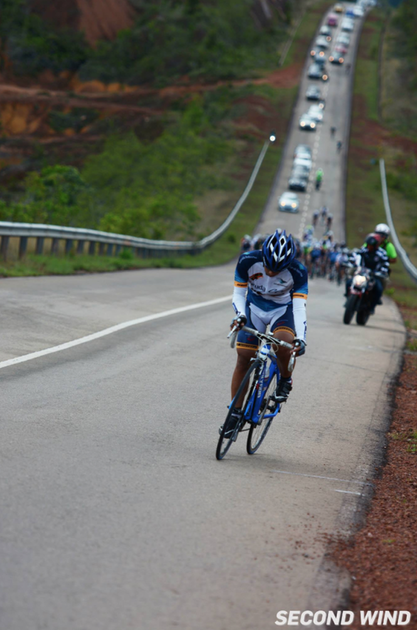 The hills of the Barelang Highway are short but many are very steep
Long-range breakaway attempts made on the outward leg of the Tour de Barelang rarely succeed (although one such solo attack eventually morphed into the winning move in the 2015 Cat 1 contest), instead the races usually begin in earnest after the u-turn. Sizable pelotons are the norm as the races negotiate the tiny roundabout that signals 55km to the finish line, but the big bunches are soon whittled down as the traditional headwind reveals itself and the attacks start on the hills.

Optical elusion or just a variant of nature, the first few climbs on the return leg always seem much steeper than when tackled earlier in the other direction. The result is the same, riders spat ingloriously out the back, left to hopefully form small groups to make the journey more bearable. By this stage the sun is usually high in the sky, although for the 2015 race some cloud cover rolled in, taking some of the sting out of the heat.

Also helping keep the racers cool are the squads of motorcycled water carriers that accompany each peloton. One of these motorbikes will accompany any significant breakaway attempts, while stationary refreshment posts are also sprinkled along the route, allowing riders dropped by the main bunches to refill their bidons and bottles with water or sports drink.

Whether the races are decided from breaks or bunch finishes, the speed at the front of each category is always frantic over the closing hour as one bridge after another is counted down on the way to the finish line. And then, when the spans of the Barelang Bridge come into sight with about 10km to go, the pace quickens again as the riders began to smell the glory. It’s already a tough race for tough riders but just to underline its classics-like status, the finish requires those battling for the win to dig even deeper as the bridge slopes up steeply for 300m towards the line.

In the 2015 edition, long-standing breakaways prevailed in the Cat 1 and Cat 2 contests despite once-healthy leads deteriorating in the closing kilometres, while the Cat 3 race featured a bunch finish. But the war of attrition that is the Tour de Barelang saw the peloton in the last group reduced from 100 to just 30 riders.

After passing the chequered flag, the post-race festivities begin almost immediately. The riders roll 500m down the other side of the bridge, then take a left turn to a seafront resort where a buffet lunch in a huge open-walled hall allows the racers to refuel, recharge and recover. A simple awards ceremony allows the day’s winners to receive their justified acclaim and then it’s back to Sekupang on a fleet of buses to board those chartered ferries bound for Singapore.

Wheel and water support are never far away from the racers (photo: Tony Rose)
While the day ended with a hiccup that saw some of the bikes miss the ferries, the 2015 Tour de Barelang was still a success in the eyes of most of the participants and cemented its growing reputation as a local “classic”. Cycosports have found a winning formula with their streamlined logistics process and a one-day race format that allows most of its participants to be home with their families by the Saturday night.

Cycosports will return to the Barelang Highway in September for the Barclays Wheels for Change gran fondo. It’s a charity event that covers much of the course of the Tour de Barelang, but in a non-competitive environment that allows much more time to take in the beauty of the islands and smell the roses.

And of course the Tour de Barelang will be back again in 2016. Click here for links to it and other races in the Cycosports race calendar.
Words by Alan Grant. Photos courtesy of Tony Rose, Rhys Cheng, Second Wind Magazine and Cycosports. (This article first appeared on www.cycleasia.com)