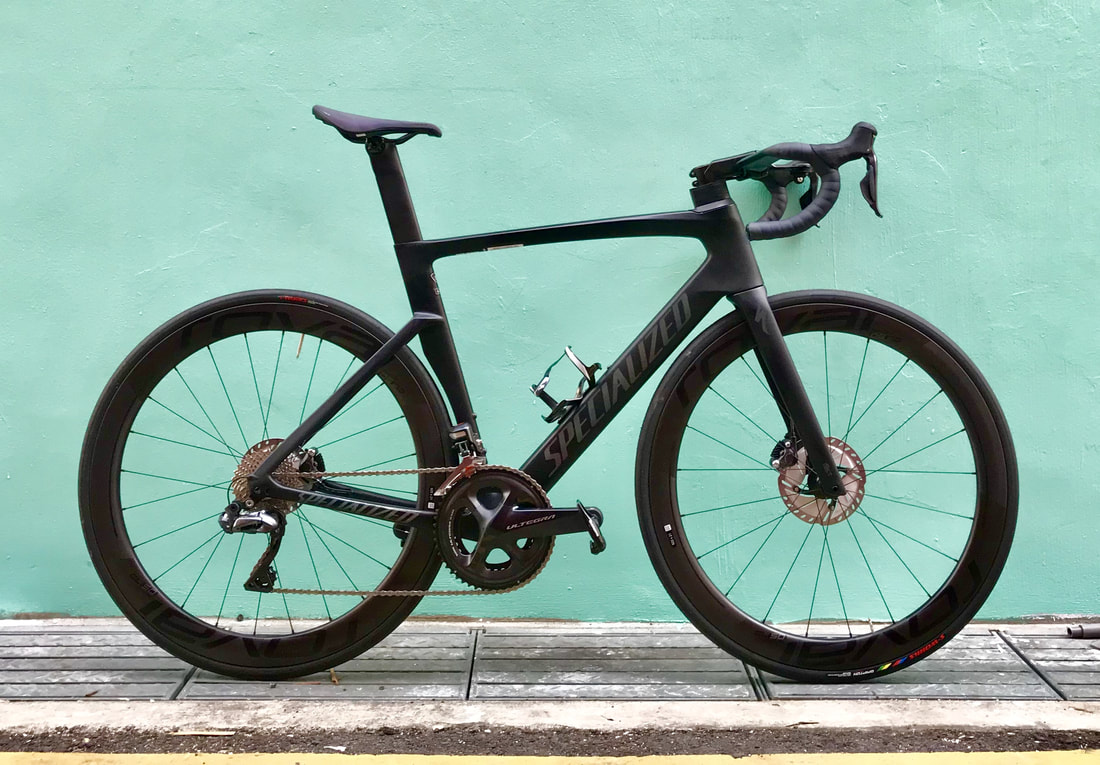 Thanks to the “tryouts" program at the Specialized Concept Studio in Singapore, Flat Spoke Media’s Alan Grant borrowed a new Venge Pro Disc UDi2 for a few hours last week ... he liked what he saw and experienced.
August 24, 2018
When Specialized revealed the Venge #3 last month it only released details about the top-of-the-line S-Works version. Blinged out with Shimano Dura Ace Di2, a pair of Roval CLX64 wheels, a dual-sided, power meter-equipped S-Works crank, a FACT 11r carbon frame, Ceramic Speed bearings everywhere that counted and more, it was a dream bike along with what was for most cyclists a fantasy price tag of S$16,600.

But just a few weeks later the Big S unveiled the Venge Pro Disc and made a lot of dreams a step closer to reality. It’s still not exactly a cheap bike at a recommended retail price of S$10,800, but the substantial cost savings over the S-Works Venge for what is still an amazingly attractive package will bring it into the price range of a few more riders.
​
The frame in the Venge Pro Disc is exactly the same as the S-Works model, as is the FACT 11r fork, the S-Works seatpost, and the S-Works Aerofly 2 handlebar and integrated stem, but the Dura Ace Di2 parts have been replaced with the hardly shabby Shimano Ultegra Di2 groupset. The crankset is Ultegra too and the Venge Pro model lacks a power meter. 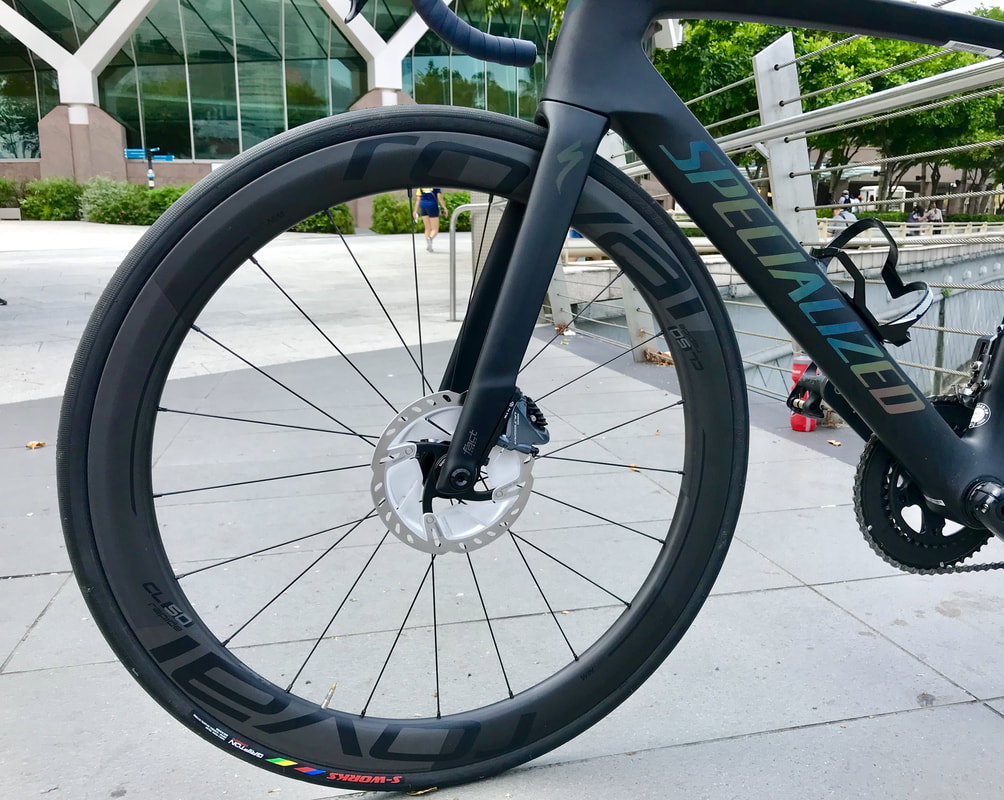 The tubeless ready Roval CL50 wheels come with S-Works Turbo 700x26mm tyres
​The other main difference is the wheelset, as it comes with a pair of Roval CL50s instead of the CLX64s; the missing “X” in the CL50 name means the hubs have DT Swiss 350 stainless steel bearings as opposed to those from CeramicSpeed on the 64s, and the spokes are of a  slightly lesser grade. Similarly, the Praxis bottom bracket lacks the CeramicSpeed bearings of the S-Works.

The claimed weight of a full Venge Pro Disc size 54 (without pedals) is 7.55kg (+/– 100g); with a pair of Look Keo pedals fitted our size 56 test model tipped the bike shop scales at 7.8kg, so it hit the mark there. Some of the weight weenies out there might be aghast at such a “heavy” bike, but the Venge isn’t supposed to be an ultralight climbing machine, it’s an aero speed machine (it can climb, by the way). It’s worth pointing out, though, that the new Venge Pro Disc is actually lighter than its popular predecessor the Venge ViAS and is only 350 grams heavier than the new S-Works Venge.

But how does it ride? Well, the initial answer to that one is that it rides like a Venge. Your writer has ridden/raced both the original Venge and the ViAS. 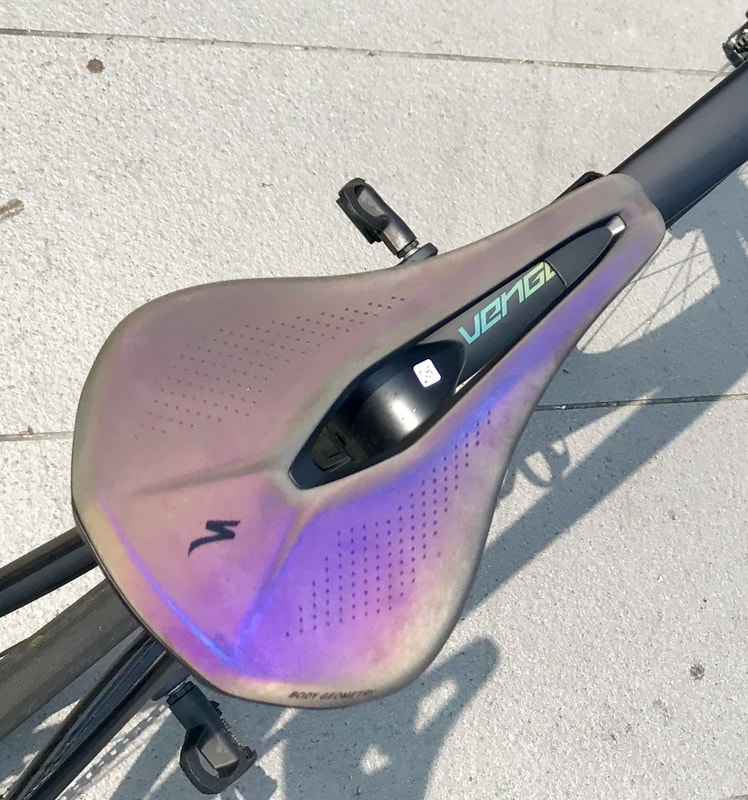 The Power Expert saddle with titanium rails looks even better in the flesh
Like the ViAS before it, the new Venge Pro is super stiff but doesn’t feel harsh when putting down the power and hitting rough patches of road (our writer headed out Tuas way to find some truck-gnarled tarmac). Indeed, it smashed through the bumps and fissures like a tank, as the rear end absorbed most of the shock rather than transmit it up through the saddle like the original Venge did. Specialized say the seatpost area on the new Venge is 40 percent more compliant than on the ViAS, and while that’s difficult to verify on the road, it certainly didn’t give a jarring ride.

The new Venge certainly doesn’t handle like a tank, though. It zips away from the traffic lights and gets up to cruising speed in no time, and goes exactly where it’s told to go when hitting corners. 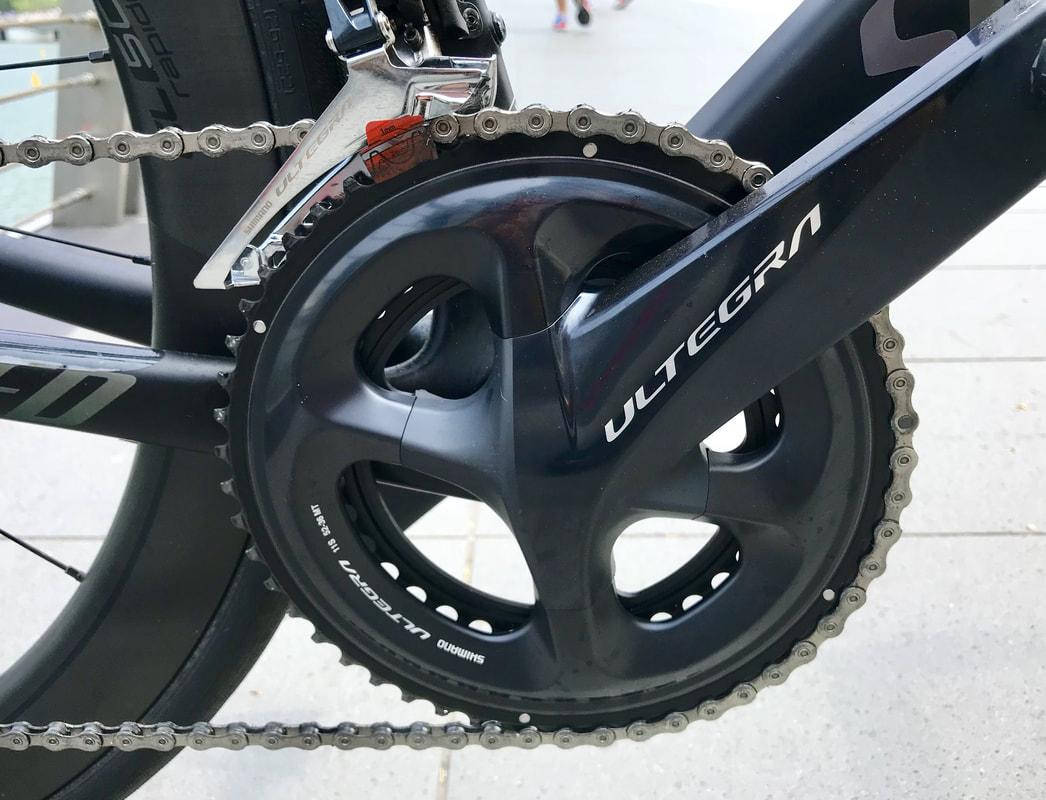 The Ultegra crankset comes with 52-36 chainrings, so the big sprinters might need to swap them for 53-39 or more; that's easy to do with Shimano cranks
​And did we mention it can climb? Our writer gave the Venge Pro Disc a nudge up Mt Faber and according to Strava came away with his fastest time for the climb since 2014! When getting out of the saddle and stomping down on the pedals, the bike certainly didn’t feel like it weighed 7.8kg. Perhaps for longer climbs it won’t float uphill quite so well, but for power climbers and rouleurs the Venge Pro could be the ultimate weapon of choice for classics-type terrain.
​
The tour bus brigade prevented a full-on attack on the descent of Faber but the bike was in its element during a traffic-free swoop down the gentler slopes of South Buono Vista Road. It carved round the curves with minimum guidance and the slightest feathering of the UDi2 hydraulic disc brakes was enough to rein in the speed when required.

​Those disc brakes are a huge upgrade from the proprietary braking system that was on the original ViAS, which like all carbon rim-equipped bikes struggled a bit in the rain. While the Venge Pro ride was performed before Singapore’s recent dry spell broke, meaning no wet weather test was performed, it’s an accepted fact that disc brakes work in a far superior way, especially when it’s raining, so in tropical Singapore the new Venge delivers an instant enhancement. 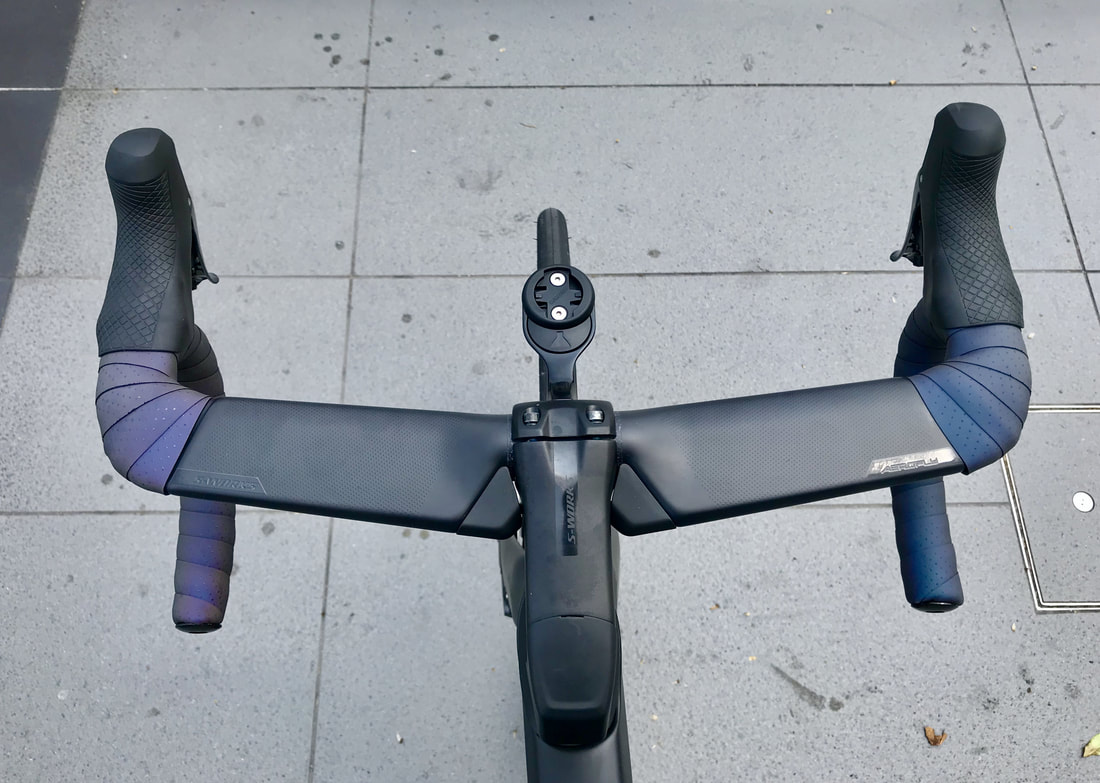 The S-Works Aerofly bar and stem comes with an integrated Garmin/GoPro mount
There’s good news too for the time trialists and triathletes that loved the special aerobars that transformed their Venge ViAS bikes into super-sleek TT machines, as those bars will fit the new Venge, although a different (and as yet unreleased) u-bracket will be required to attach them.

The Venge Pro is a great bike to ride and it’s stunning visually too. The lack of visible cables anywhere provides a super-clean look and the classic black livery is augmented with chameleon-like holographic logos that change their appearance depending on the angle of the sun. The Specialized Power saddle and handlebar tape get the same treatment, with different shades on the blue/purple spectrum evident. 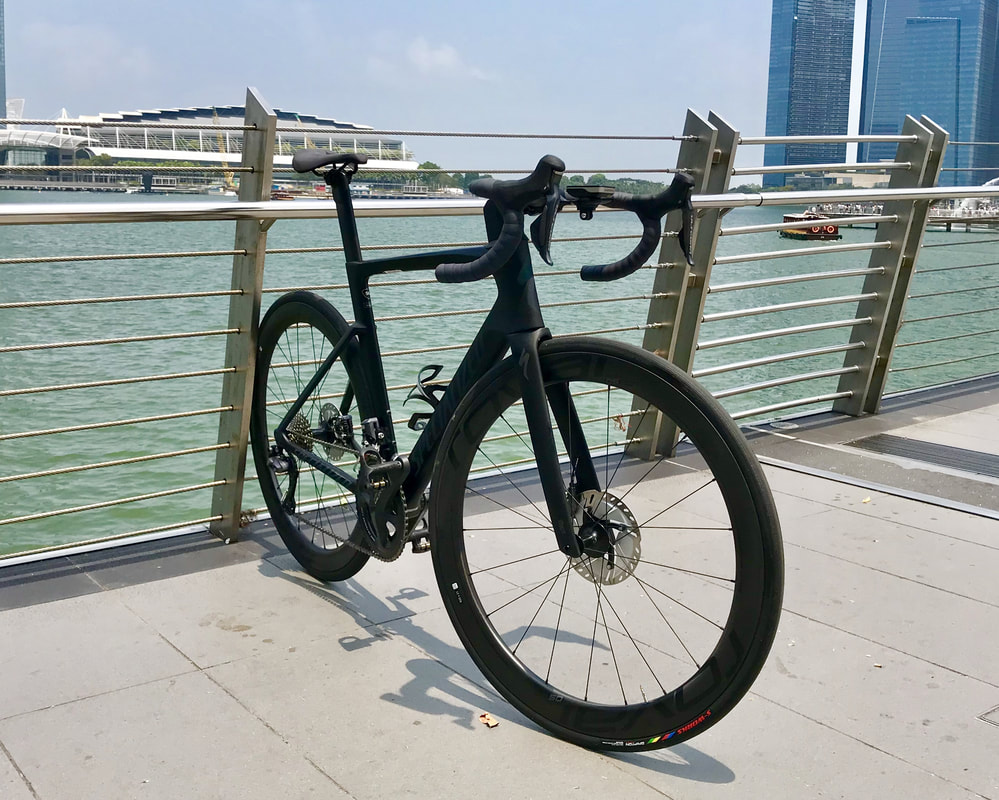 The Venge Pro Disc UDi2 can be viewed and tested at the Specialized Concept Studio in the OUE Downtown Gallery on Shenton Way, while Tay Junction, the Specialized Concept Store and T3 Bicycle Gears bike shops can hardly keep up the retail demand for both it and the S-Works version. ​
Click on this link for a full technical overview of the Venge Pro Disc UDi2.
​
Alan Grant is a fan of Specialized bikes. He bought his first, a Tarmac SL3, in 2009, and since 2013 has ridden a number of the brand’s bikes as a member of the Specialized Roval Mavericks racing team. He currently rides an S-Works Tarmac SL6 Ultralight but has eyes on a new Venge.