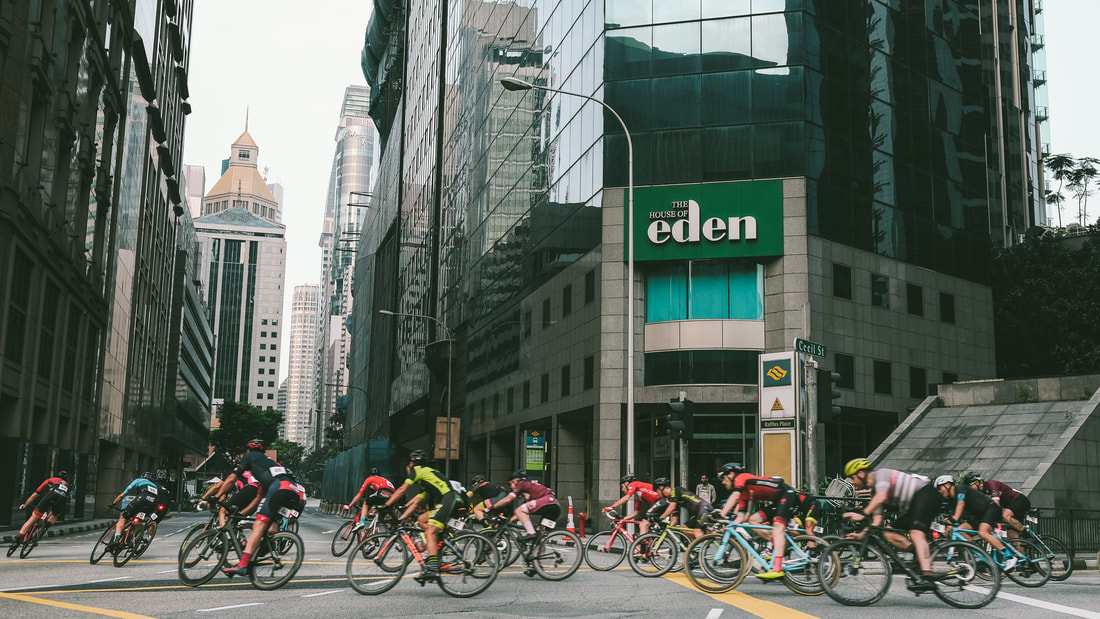 Photos courtesy of Chris Chen
July 30, 2018
As might be expected in crit races, sprint finishes were the order of the day at the July edition of the URA-CFS Share the Road Criterium in downtown Singapore yesterday, with all six contests on the race card being decided by a final dash for the line.

Race organisers Cycosports only started running the URA crits in January last year, but the concept has been a huge success, with the road racing community eagerly awaiting the races, which occur roughly every second month. A big part of that success is the fact that Cycosports spreads the racing love, so to speak, by making sure that the crits aren’t just the domain of the elite cyclists. Indeed, the hot shots missed out entirely yesterday.

As part of the wider Car Free Sunday scheme, access is only granted to the Cecil Street/Robinson Road circuit for 90 minutes for each edition of the URA crits, yet Cycosports manages to squeeze six separate races into that tight window. Yesterday it was the turn of the juniors, the ladies and the “old men” to hog the limelight.

The youngsters got things rolling at 6am, with the Junior As (17-18 years) and Junior Bs (13-16 years). The two groups started 1 minute apart, the older boys facing 10 laps of the 1.7km circuit, the younger lads eight rounds.
​
A breakaway formed midway through the Junior A race featuring recently crowned double national champ Jie Yu Moh (TWC Racing), his teammate Shu Hong Lim, Mohd Farus (Geylang Cycling Team), Samuel Leong (RADstation) and Jack Grant (Specialized Roval Mavericks). The quintet swapped turns nicely to make sure they stayed away, so when the bell sounded for the final lap, it was clear the winner was going to come from the break. 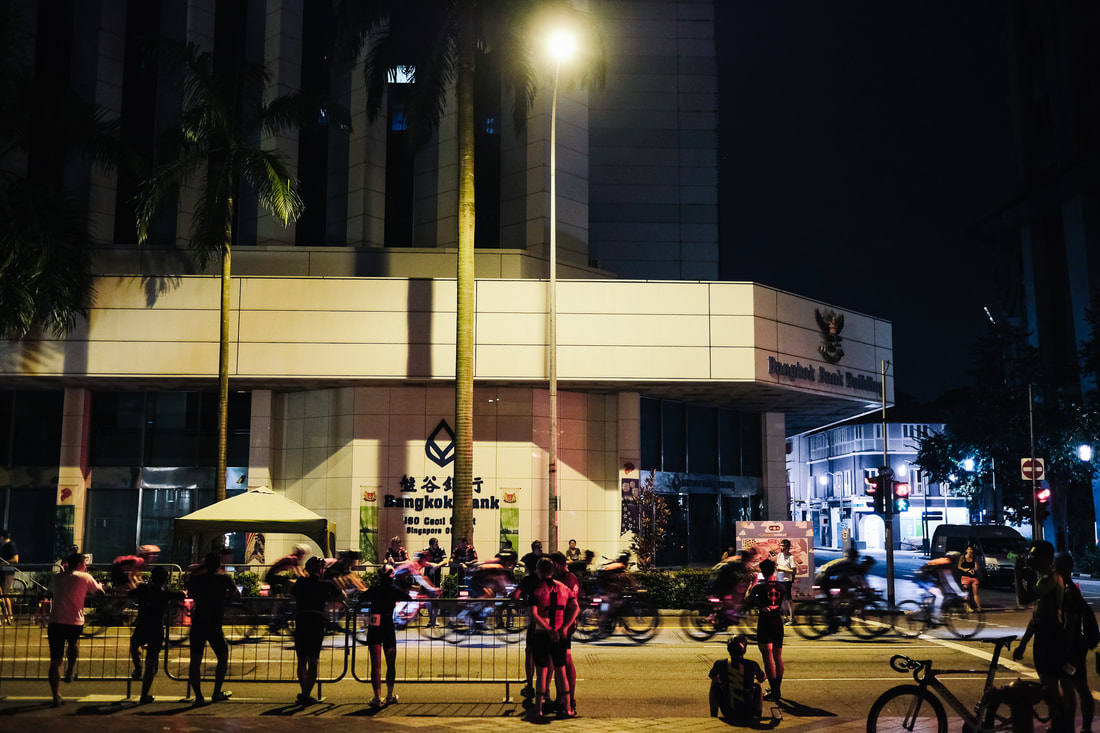 Pre-dawn, street-lit racing has become normal in Singapore
It was Grant who proved the strongest on the day, timing his sprint to perfection to take a clear victory in a time of 24 minutes, 27.35 seconds. It was blanket finish between three riders for the other podium places, with Moh taking second from Faris by two hundredths of a second. Spare a thought for Lim who missed out by half that margin.

The Junior B participants were all still together when they started their final lap and so the scene was set for another exciting finale. Again, one young man proved slightly stronger than the rest, the honours going to Billie Mah (Integrated Riding), the current national Junior B champ. A big push for the line delivered victory to Mah a good bike length clear of Julius Tangit (TWC Racing), who took the runner’s-up spot by one hundredth of a second from Zac Yeo (30Forty Cycling Team).

The well-oiled Cycosports team had the next wave of racers on the start grid and off within five minutes of the juniors finishing. The second wave yesterday featured a Women’s Open race followed a minute later by a Women’s Masters (35+ years). The former group were tasked with nine laps of the circuit, the latter a lap less.​

Women’s competitive cycling has enjoyed a rapid rise over the last year or so, a fact borne by the fact that there were two races on yesterday’s program, when in the recent past female racers were lucky to get one stand-alone event in many events. 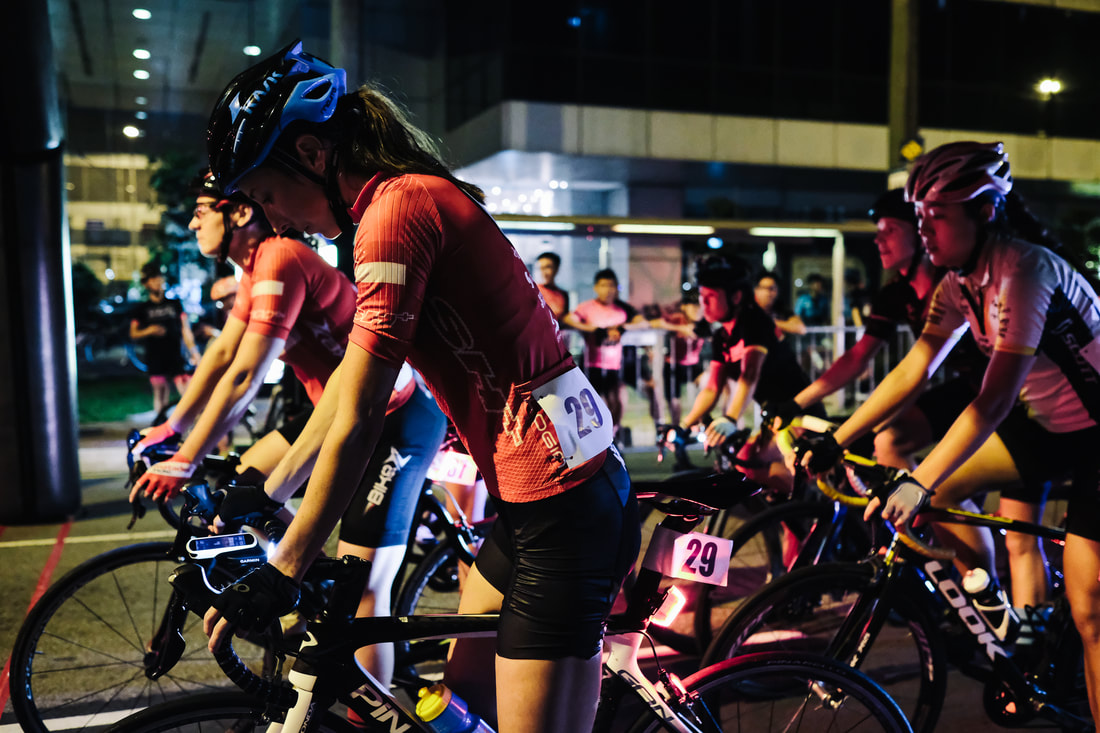 Nervous faces abound in the Women's Open starting gate
The Women’s Open field attracted a mix of seasoned riders, youngsters and relative newcomers to racing. They were well matched throughout a good race, and it again came down to a sprint for the glory. Chelsie Tan (BikeLabz) took the win, the triathlete-turned-roadie and recent ITT national championship sliver medalist just pipping the hugely promising teenager Ashley Jenna Lui (Team Cycleworx) by a tenth of a second. Not much further behind was Julie Pickler (MatadorRacing) in claiming the final spot on the podium.

Alas only three ladies registered for the Women’s Masters contest, but the trio of riders still put up a competitive contest which was again only settled in the sprint. The winner was Winnie Cheung (Team Cycleworx), from Rebekah Khan (RADstation) and Stella He.

The action concluded with the biggest field of the morning, the combined Men’s Super Masters (45-54 years) and Men’s Veterans (55+ years) race; the latter group only attracted four competitors so was absorbed into the “youngsters’ race”, but they were more than good enough to keep up. 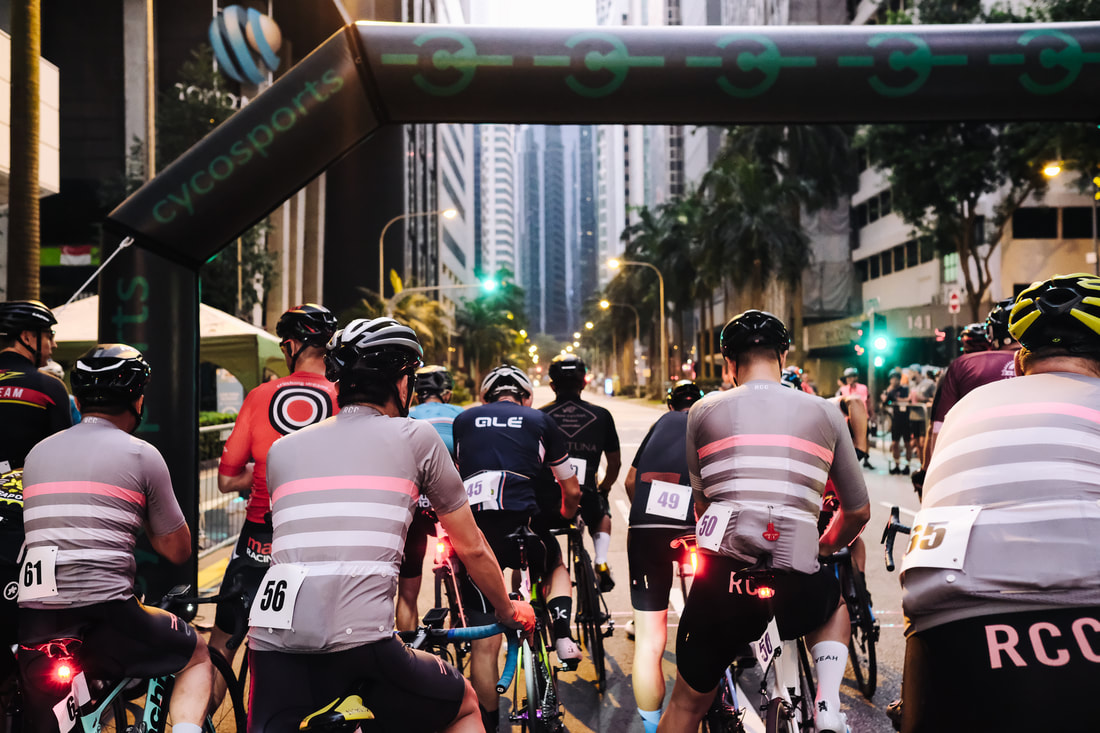 The Rapha Cycling Club were out in force in the Super Masters race and on the sidelines
Super Masters racing is far from a category for aging cyclists, with some of Singapore’s best riders residing in that age group. Many of them were on hand yesterday and so a top quality race unfolded. “Attack, chase, repeat” was the main theme of the contest, but none of the many thrusts and barbs had any significant longevity and so it came down once again to the sprint.

It’s probably no surprise to many that the man with the fastest kick proved to belong to Brian Johnson (BikeLabz), but the recent victor of the Singapore national champs Super Masters race didn’t win by much this time, just two hundredths of a second from Keiichi Dr Avocado Hayashi (Team Next Stage). There was relative daylight between that pair and the battle for third place, which was won by Sai Keong Leong (RADstation) by another razor-thin margin from the unlucky David Strooper (MatadorRacing).

Three of the Veterans racers were within the big bunch that contested the sprint, and when the dust settled it emerged that Paul Douglass (4T2) had taken the crown. Jeffrey Keng (Team Cycleworx) was the runner-up, with Peter Morgan (Cranks Racing) in third.

Check all the results from the July edition of the URA-CFS Share the Road Criterium by clicking on this link. 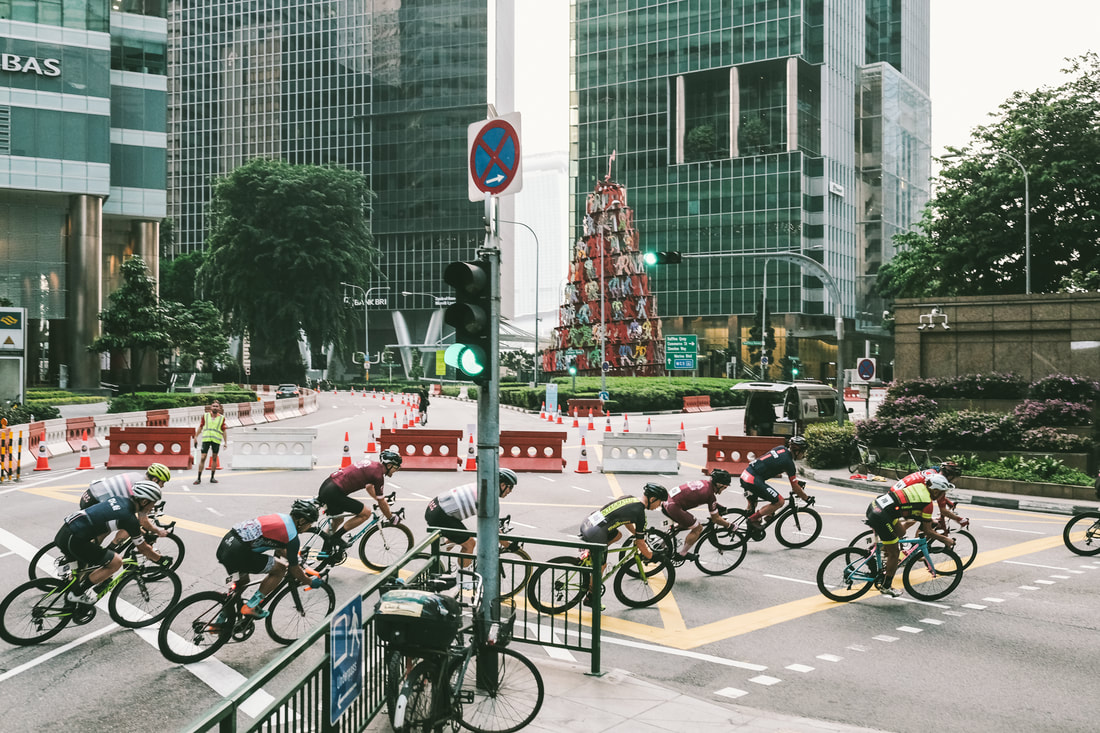 Car Free Sunday brings a certain majesty to the streets of the Singapore CBD ... especially during bike races!
The URA-Car Free Sunday Crits will return in October but there’s much more Cycosports racing before then. Next Sunday sees a pop-up “speedway” event – the GetActive Singapore Cycling Challenge – at the Singapore Turf Club in Kranji, while two weeks later on August 19 urban vertical racing returns to Singapore with the OUE Downtown Carpark Race.

The latter features a 1km course that takes in both the basement and upper carparks at the OUE Downtown Building. This quirky but fun format (the 2016 hill climb at OCBC Bank building was a blast) costs only $50 to enter, but the event goodie bag contains Downtown Gallery vouchers worth $50! There are 12 different categories across road bike, MTB and fixed gear disciplines, so something for everybody. Click on this link to register.

Wacky races aside, hardcore roadies are eagerly looking forward to the Tour de Kepri, a three-day stage race taking in a crit and a challenging road race in Bintan, followed by a gruelling slog along the Six Bridges route to finish. It promises to be a cracker. Get full details by following this link.
Proudly powered by Weebly