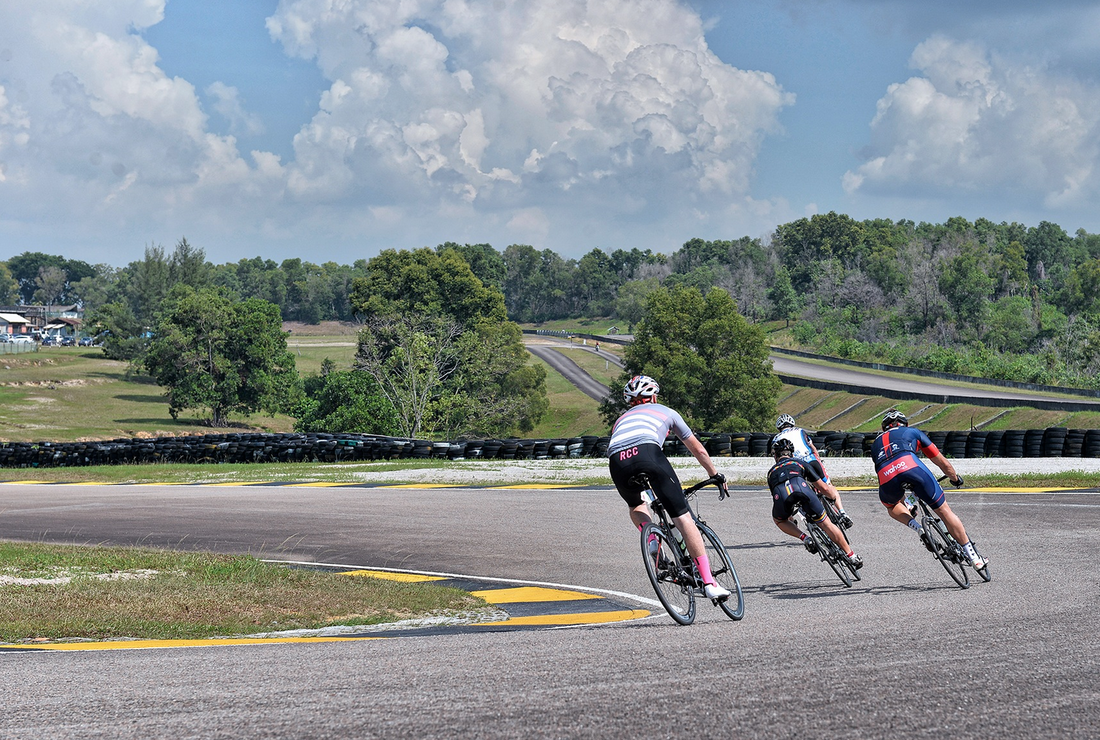 All photos courtesy of Richard Leong/Relish design+photography
Pasir Gudang, Malaysia,
August 2, 2015
Amateur road races tend to be hierarchal affairs, with the field of entrants split into categories, either on an age group, ability or gender basis.  So it’s rare that rookies, the masses of the weekend warrior brigade and those perhaps past their peak get to toe the competitive line with the young guns and the elites, never mind beat them.

But it does happen occasionally, thanks to the great equaliser known as a handicap race. The Singapore roadie community was given an introduction to the format last weekend at the Cycosports Pasir Gudang SG50 team handicap, held at the Johor Circuit just over the border in Malaysia. Since Cycosports entered the scene in 2013 with its much-welcomed program of “local” overseas races in Bintan, Batam and Malaysia, it has tried to make each race day different and it certainly delivered with the SG50.

“We heard about a similar race being run at the Yokohama race track in Japan and thought ‘hey we could do that’,” explained Cycosports chief Kent McCallum. 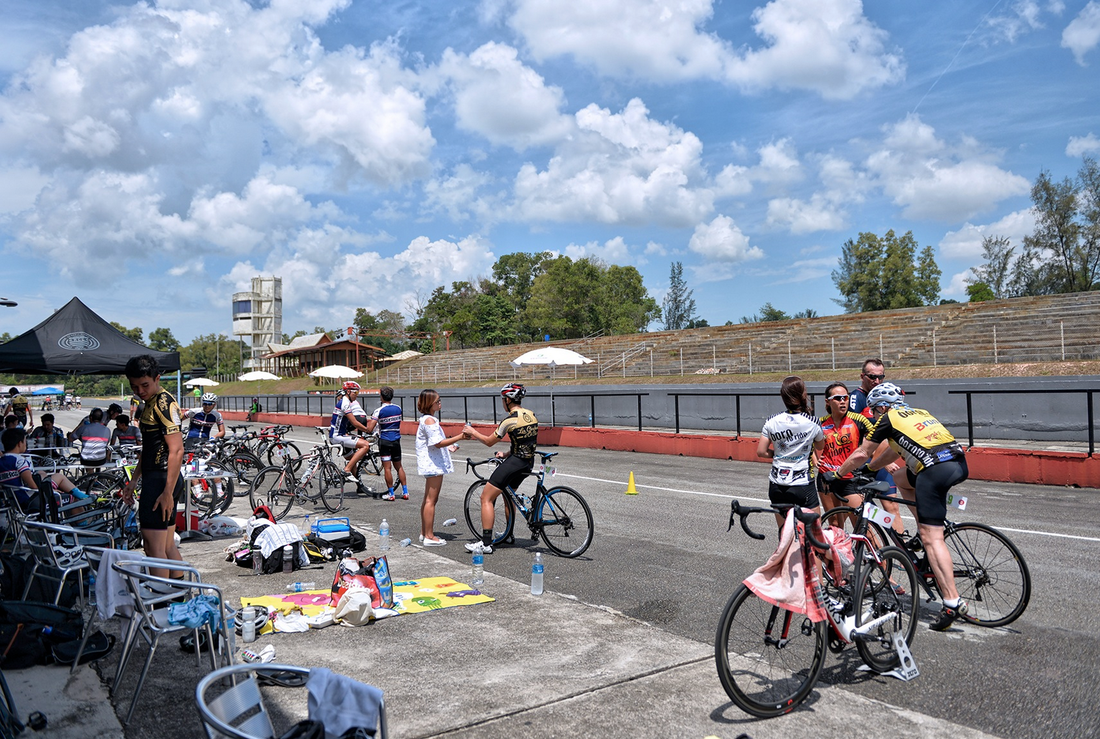 One of the major goals of Cycosports since its inception has been to provide an avenue to entice more cyclists to the wonderful world sport of bike racing.

“We really want more riders who have not experienced a race before to get involved. A team race allows experienced riders to bring newbies in and handicapping gives everyone an equal chance of winning. Plus the Pasir Gudang track is a really safe, car-free environment for those wanting to try the thrill of racing,” McCallum said.

The circuit is more used to hosting motorsports races, but the SG50 was the third bike race Cycosports has staged on the track, which features an undulating layout just under 4km in length. In a nod to Singapore’s 50th birthday celebrations, the teams of three or four riders at the SG50 were set the task of riding 50 laps of the circuit, or almost 200km. Rather than the familiar team time trial format, the race was a relay, with only one rider from each team allowed on track at any one time.

As McCallum alluded to, the track doesn’t present much of a technical challenge for cyclists, with its nine corners so wide open that brakes are hardly required. But it also features two short, sharp hills that begin to soften up legs after a few times round.
The concept of a handicap race is that the riders start on a staggered basis, with the slowest going off first and the fastest last. In theory, if the handicaps have been calculated correctly, the whole field should come together near the end of the race providing for a thrilling finish. 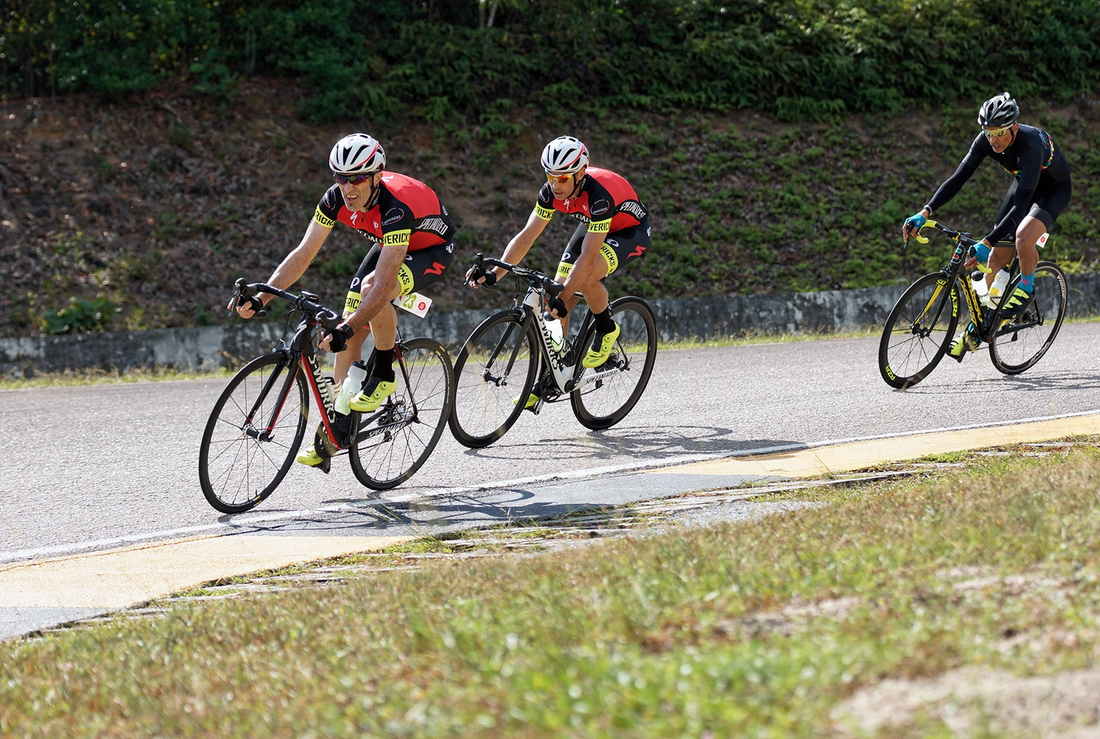 In places with mature competitive cycling scenes, such as Australia, the United States and many of the European countries, handicapping is pretty easy thanks to the grading systems that a regular diet of races allows for. Typically a newcomer to road racing in those countries will begin at the bottom in a Cat 4 (or it might be called Grade D due to local nuances) contest. Progress to the higher categories is made by winning or placing well enough in races to earn points on a regular basis.

Singapore has a dearth of officially sanctioned races and no proper grading system. Cycosports offers Cat 1, Cat 2, Cat 3 and Women’s categories at each of its race days, but it operates on a self-seeding basis, with competitors choosing which division to race in. While cases of rampant abuse of this honesty system have been rare, the system isn’t perfect and perhaps needs tweaking. Case in point is the fact that at the recent Cycosports Tour de Barelang in May, less than 30 riders entered the Cat 1 contest, while the Cat 2 race featured a sold-out, 100-strong field. A more regulated grading system would provide more balance.

For the SG50 race, McCallum and Co used what data they had and calculated the handicaps based on the results from the Cycosports Pasir Gudang Circuit Race held on the track back in April. Cat 1 riders were expected to complete a lap in 5:30 minutes, Cat 2 riders in 6:00 minutes, Cat 3 riders in 6:20 minutes and Women in 6:30 minutes. The total handicap for each team depended on its make-up. 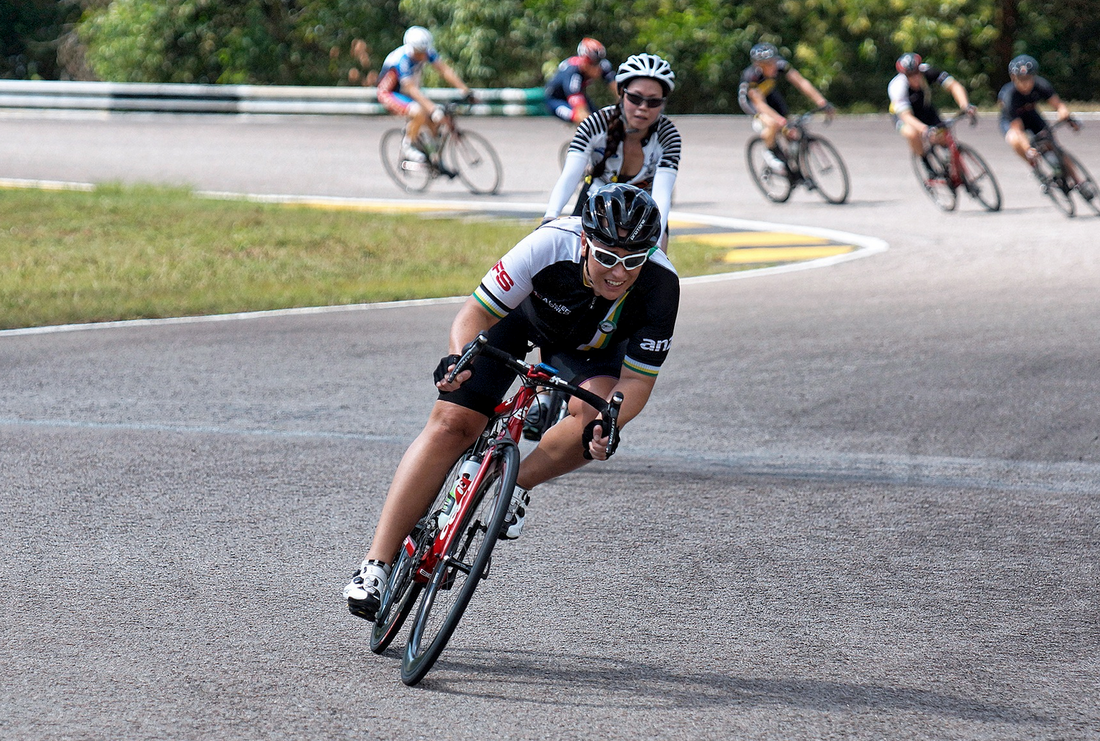 At one end of the scale, this meant that over the full 50 laps, a team comprised entirely of Women riders would have an advantage of 50 minutes over an all-Cat 1 team. The SG50 was intended to be (and definitely was) a fun, social affair and mixed teams were actively encouraged. As it was, only about a quarter of the 25 teams that contested the race were cross-category trios or quartets, while 16 featured solely Cat 3 riders. This large bloc of teams was given a handicap that saw them start the race 41:40 minutes ahead of any all-Cat 1 squads and 16:40 minutes before any Cat 2-only teams.

The action started at 8:04am when a quartet from the Joyriders comprising two Cat 3 riders and two ladies rolled out. Last to start at 8:52am were the three all-Cat 1 teams, two from the Specialized Mavericks and an Allied World CCN squad.

Many of Singpore’s cycling clubs/teams were represented at the SG50, including, Anza, Ascenders, Cannasia, the Cranks, Team Integrated Riding, 4T2, Rapha CC, Revsin-Barbarians and the delightfully named Les Chercheurs d’Or Club, plus three teams of students from Singapore Polytechnic. But quite a few of the teams that regularly participate in the Cycosports races were noticeably absent and the organisers quietly made a loss on the event. If the Singapore roadie community wants the Cycosports Series to continue then every race in the series needs to be well supported, even quirky events like a handicap. 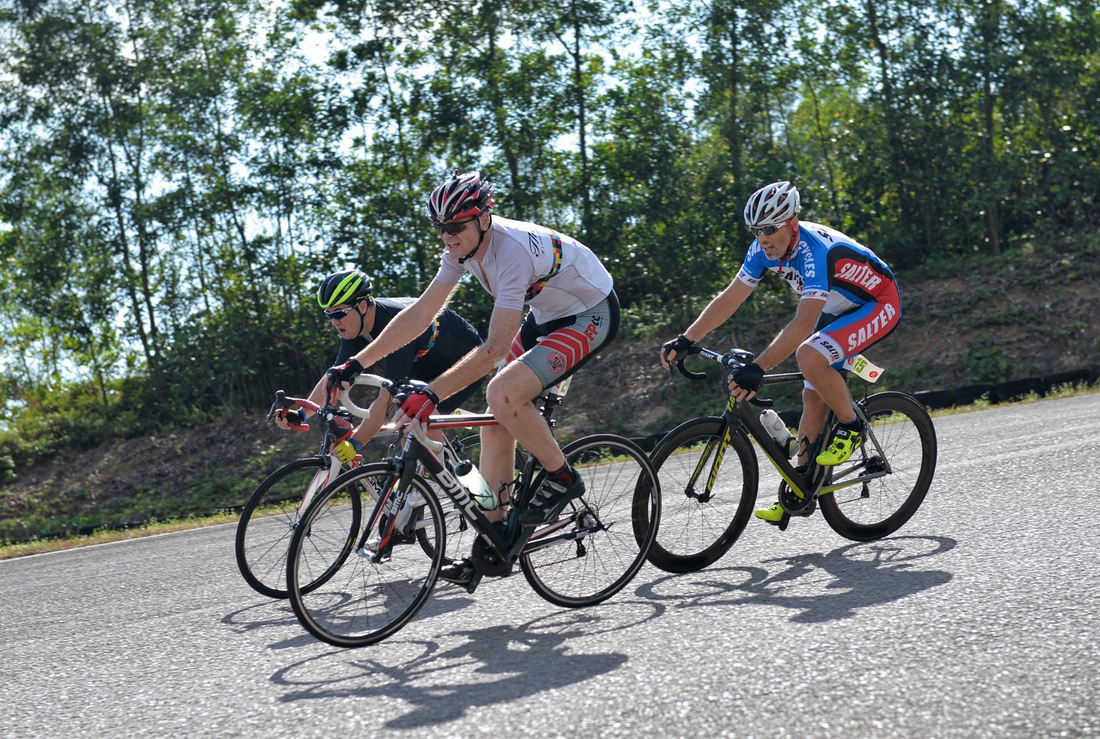 Among the 100 or so racers and supporters who did travel across to Pasir Gudang, it was obvious from the general vibe that the event was a great success. While it was a race and the cyclists were riding hard, the day had more of a carnival buzz to it than a hard-edged competition. The fact that only 25 riders were on the circuit at any one time meant the rest had plenty of time to hang out between their stints on track.

Party central was the transition zone in the pit lane where each team was stationed outside a numbered garage. Some teams had static trainers for their riders to warm up and keep loose on between stints, while others just sat around chatting, recovering after hard efforts or tinkering with their bikes. Friendly rivalries between some of the teams ensured that the banter was flowing liberally, especially around the leaderboard.

Most teams brought their own nutrition but the cyclists also didn’t have to go without their favourite fuel as Singapore café Gaest set up a stall in the pit area providing great coffee as well as tasty sandwiches and cakes.

The leaderboard was a huge screen connected to the event timing system. For each team it displayed the time for fastest lap, last lap, average lap and most importantly, the estimated finishing time. The virtual rankings were based on that last criterion. Each team was given a bidon containing a timing chip and this was the relay baton to be exchanged in the pit lane. 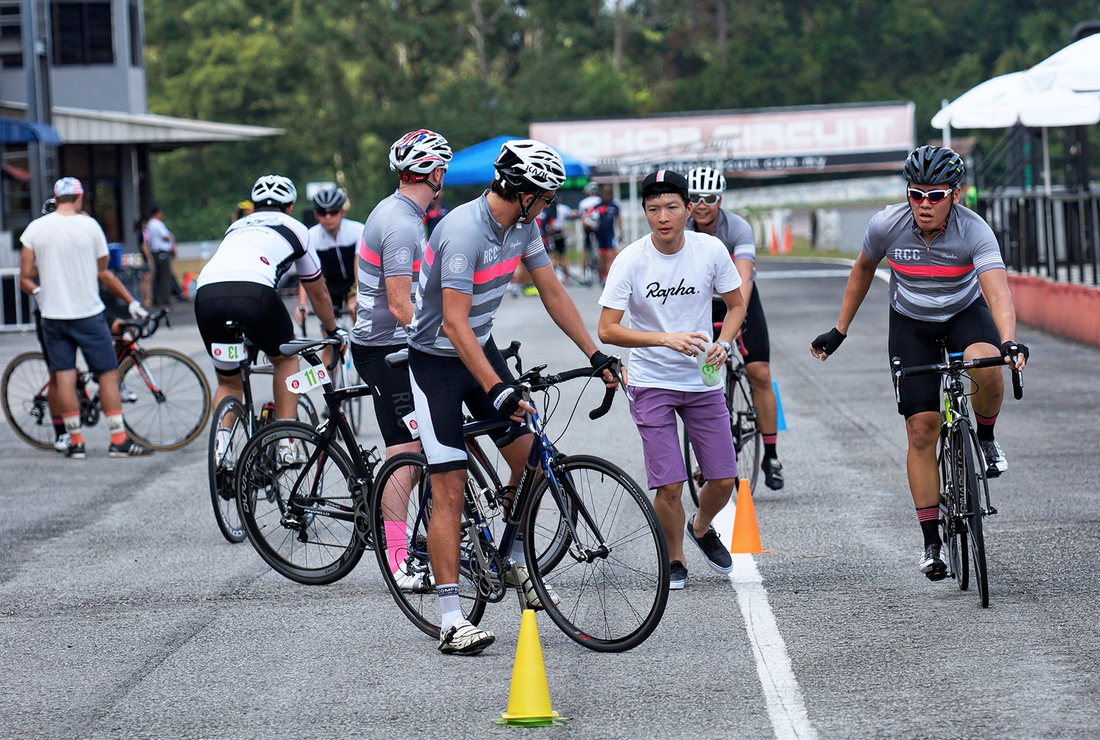 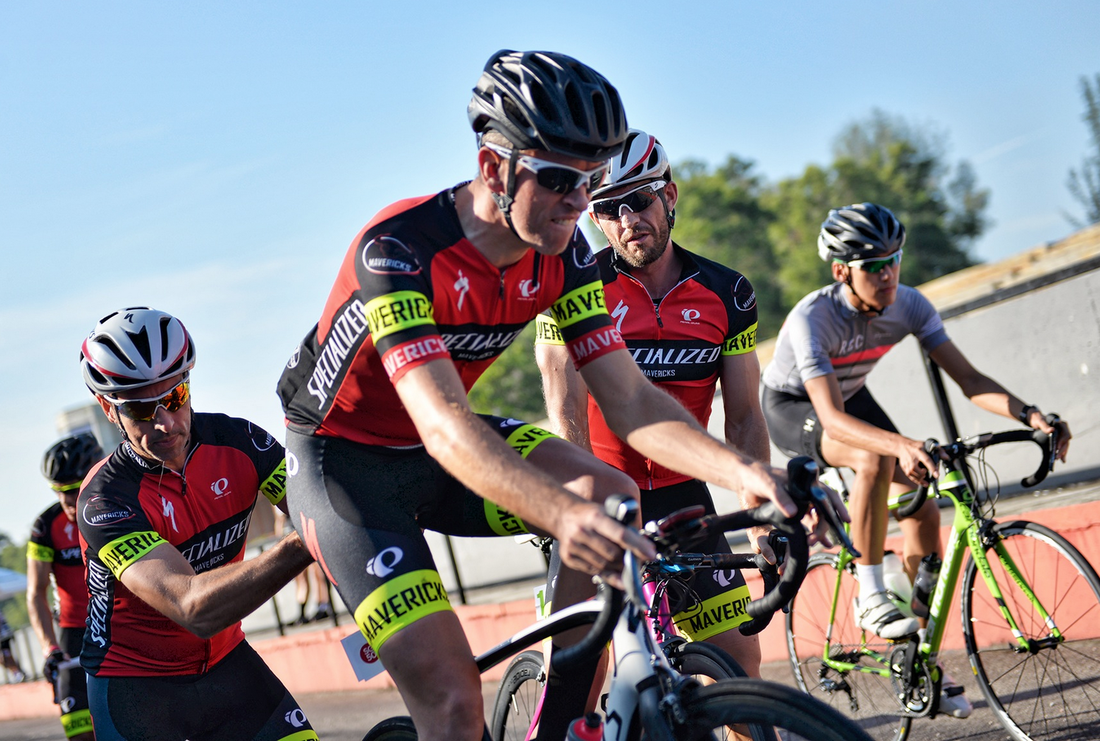 The racing itself was quite strategic.

With 50 laps to complete per team, all things being equal each member of a quartet would rode 12-13 laps, with those in trios would have the pleasure of doing 16-17 circuits of the track. How they divided up the allocations was up to the individual teams. Going into the pits was 100m shorter than a full lap of the track, but the offset there was a 20kph slow zone going through the transition zone.

Initially, some game plans saw riders stay out for lengthy stints of five or more laps, while others opted for two flying laps before pitting. But as the race unfolded on what was a glorious but blazing hot morning, shorter spells on the totally exposed track became the order of the day.

While the Cat 1 teams obviously contained the fastest riders, most of the other participants were well practised in the fine art of drafting. The result was small packs of racers getting a free ride for a lap or two while the Cat 1 guys did their best to drop their passengers.

However, most of the mini pelotons that were the key feature of the day’s racing were formed out of mutual benefit. It became clear to the majority of the teams that it was easier and just as fast to ride in groups taking turns than putting in all-out TT efforts, which seemed to be the ultimately unsuccessful strategy of the Cat 1 teams. 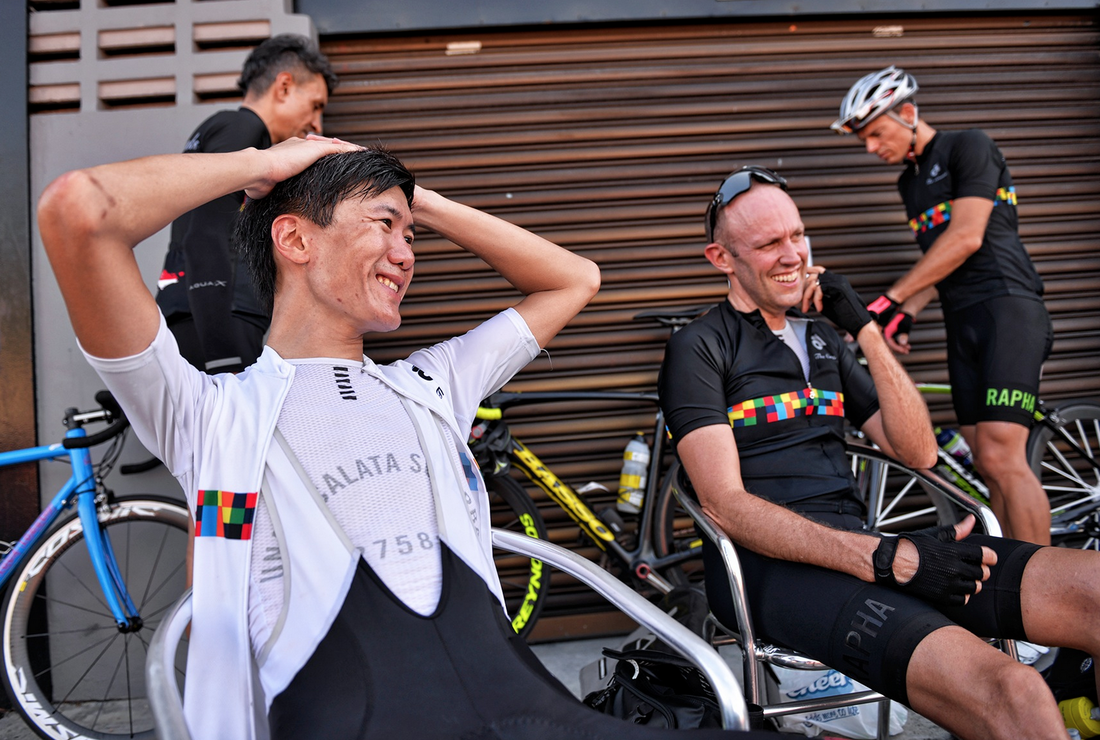 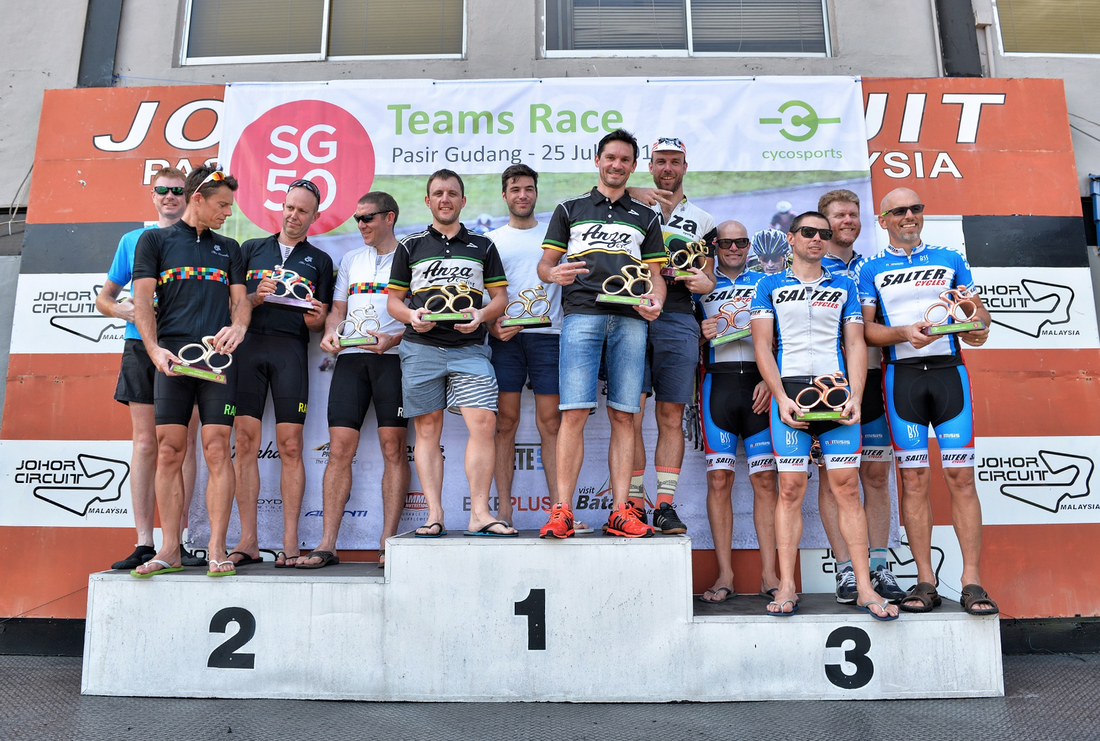 Pre-race, the handicapping calculations had all the teams scheduled to finish sometime around 1:25pm. As it turned out, after just a few laps of the race, the virtual leaderboard showed that two teams (FrAnza and The Cranks) had managed to separate themselves from the rest. While that pair were well matched and finished within two minutes of each other, the winners FrAnza completed their 50 laps some nine minutes ahead of schedule at 1:16pm. The third-placed team from Salter Cycles didn’t pass the chequered flag until 1:28pm, with the rest following in dribs and drabs over the next half hour.
While the handicapping was perhaps not perfect, it produced a popular podium devoid of Cat 1 riders, thus giving the underdogs their moment in the spotlight.

McCallum was very happy with how the event unfolded but admitted the handicapping system would need to be tweaked before Cycosports tries the format again.

“Ideally, it would be great to get more data about the riders, perhaps creating a handicap from a few popular Strava segments might work,” he said. “But the whole day was fantastic. It had the thrills of the virtual leaderboard spurring teams on, the transitions to add excitement, plus the relay format provided an opportunity to chill, have a coffee and get to know the other teams."

McCallum and his team will return to the Johor Circuit to stage the next race in the Cycosports series on August 22, when in another first for the company, a time trial event is on the cards. The Anza Allied World TT Championships is open to all-comers and offers both individual and team time trial tests. The men will race over 10 laps of the 3.9km track and will be split into Open, Masters (35-44) and Super Masters (45+) categories, while the Women face eight laps. Visit the Cycosports website for full details and for results from the SG50 handicap race.