The Road to the Taiwan KOM: a perfect mix of pain and pleasure

The Road to the Taiwan KOM. Words by Alan Grant, photos courtesy of the Taiwan Cyclist Federation
I’ve pondered how it’s possible to recommend the Taiwan KOM Challenge or the Road to Taiwan KOM to cyclists knowing that it will probably be the hardest thing most of them will ever do a bike. But life would be pretty boring without things to challenge us, and while taking on the biggest climb will no doubt bring periods of pain, the priceless feeling of wonder at reaching the top, and the memories made along the way make it easy to be an advocate.
July 27, 2017
“Why on earth am I putting myself through this again?” I found myself thinking three weeks ago when I was 100km into the Road to Taiwan KOM cycling event, a sportive version of the famous Taiwan KOM Challenge.

The 5km-to-go sign had just appeared when I’d thought (or perhaps was just helplessly hoping) I was only 2km from the finish line at Wuling Pass atop the mighty Mount Hehuan. I’d been there before in November 2015 and the painful memory of that occasion came pouring back into my consciousness from the dark place where it had been safely hidden.

However, in most tough cycling rides or races, pain is only temporary, and sure enough, when 35 minutes later – yes, it took me over half an hour to complete those final 5km, which includes 1km of downhill! – I climbed off my bike at the end of our sport’s longest “hill” climb, the all-over ache was gone, replaced by endorphins flooding my brain as I basked in the glory of accomplishment, my eyes feasting in one of the wonders of the cycling world.

Stretched out in all directions is a surreal vista of blue skies, fluffy white clouds and an endless array of mountains. Amazingly, at an altitude well past 3,000 metres, the peaks are covered in vegetation, the different shades of green and brown melding with the atmosphere in a kaleidoscope of colour. 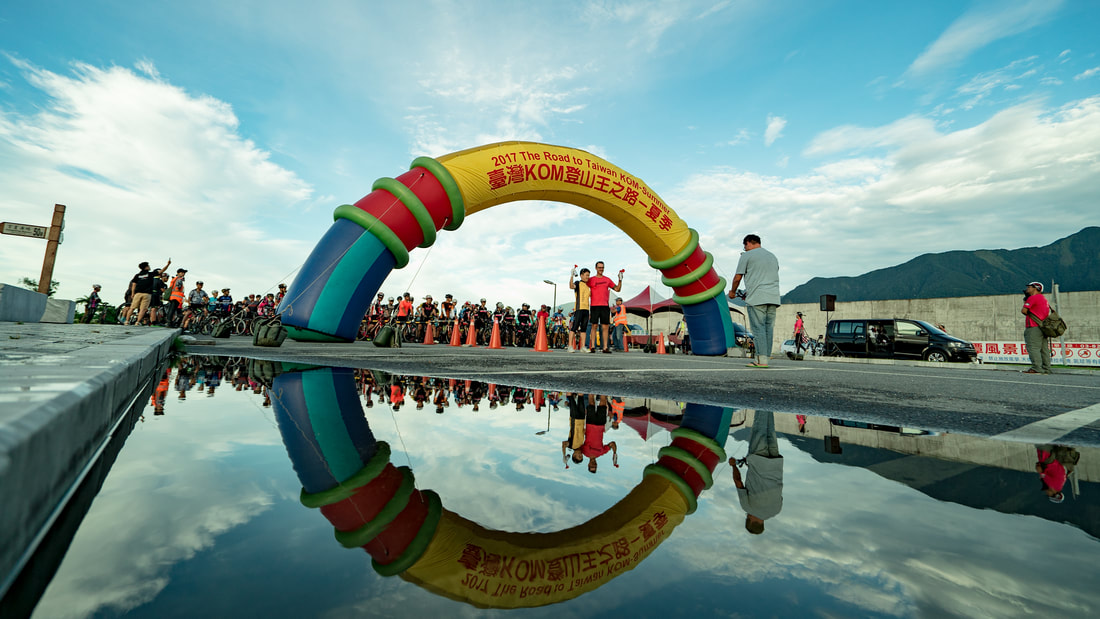 Any cyclist with a bucket list must put a trip to the Taiwan KOM Challenge or one of its two sportive editions right to the top of that list. Let’s not beat about the bush, though, conquering Hehuan is a tough task, but with a decent chunk of endurance training, a fair bit of fortitude and most importantly, the correct gearing, reaching the 3,275-metre high Wuling Pass is within most cyclists’ capabilities.
The reward is that heavenly panorama and the overwhelming sense of fulfillment.

The Taiwan KOM Challenge started just five years ago, but within the short space of time since November 2012, it has already gained iconic status, with many of the world’s best climbers having been wowed and humbled by its mix of magnificence and misery.

While the two Road to Taiwan KOM sportives are set in spring and summer respectively the big race, the Taiwan KOM Challenge, takes place in October or November, with the sixth edition due to roll off on October 20th this year. The course for all three is the same. The 105km journey starts from sea level in the village of Qixingtan, Hualien County, then meanders flatly up the coast for 18km before entering into the ethereal Taroko Gorge, which ultimately leads to the slopes of Mt Hehuan and to Wuling, which at its 3,275m is the highest point navigable by road in the island of Taiwan.

The calm before the road starts upwards
The main difference between the Taiwan KOM Challenge and the sportive Road to Taiwan KOM versions is the time cut-off; for the former, participants face a strict six-hour deadline to reach the top, whereas for the two Road to the Taiwan KOM events, riders are given a more generous nine hours to get to the top. This allows a much wider gamut of riders to benefit from climbing to Wuling in a fully supported environment. This includes frequent refreshment stations and marshals stationed throughout the route; the latter is quite important as the road to Wuling isn’t completely closed to vehicular traffic, so the marshals provide an essential service of slowing down on-coming cars.

The race/rides begin just after daybreak and the view in the early morning light from starting pen of the vast mountain range that lines the entire east coast of Taiwan is in equal parts imposing and magnetic. People don’t sign up for the world’s longest hill climb without already having the big-mountain bug, but the sheer number of enormous tree-covered peaks folding into each other in an endless mass of green and rocky grey reinforces to all the assembled riders the enormity of the task at hand.

Those first 18km along the coast are neutralised behind the commissaries car, with the action starting in earnest as soon as the road turns left and upwards. If the view from the coastal flats of the mountains is mesmerising, entering into the Taroko Gorge is mind blowing. Huge boulders the size of houses are strewn irregularly in and on the banks of the river, a sign of how powerful the rushing water that has cut out the colossal chasm over many millennia must be when in full spate.

Man had to build a network of bridges and tunnels to reach Wuling
The road to Wuling hugs the sides of the gorge for hours, crossing from side to side over countless bridges and through umpteen tunnels on its (nearly) ever-upwards march. The scenery is ever changing, but always spectacular.

A few short and sharp pitches aside, though, the first 67km of climbing is done up roads of a relatively shallow average gradient; just 3 percent. Of course a few hours of climbing take their toll on anybody’s legs, but that’s where proper preparations come into play, and the constantly stunning landscape dishes out a steady drip of natural intoxication to dull the discomfort.

Having completed that long initial climb to an altitude of 2,453m, the Taiwan KOM then throws in a 4km descent, which, while providing a welcome relief from the grind, also takes away some 200m of the elevation gained, meaning that at the end of the downhill break, there is still over 1,000m of climbing to cover in the last 16km to the summit.

Re-engaging the climbing muscles is a bit of a shock, but again the slopes aren’t too steep … for the next 6km at least. But then at the 95km mark, the first of the Taiwan KOM’s walls appear.

You’ll recall from the opening paragraph of this essay that it was the 5km-to-go-marker that brought my painful déjà vu, but as most people who have signed up for the Taiwan KOM know from the race literature and previous ride reports, the organisers actually give special prominence to the last 10km of the route, with a blown-up elevation/gradient graphic showing exactly what to expect from the formidable finale.

Nobody said it would be easy
That first wall is just 400m long and averages “only” 13 percent before “flattening out” to a mere 7 percent, but it’s a precursor of what’s to come. The entire last 10km averages 7 percent, numbers that if describing a normal climb would appear to suggest a tough, but not insurmountable task.

But this section starts at an elevation of 2,565m. To give some perspective, the highest point in this year’s Tour de France was the Col du Galibier at 2,645m. Many stories were written by the world’s cycling media of how riding TO such a high altitude would seriously effect the performance of cycling’s top pros.

Well, when tackling Mt HeHuan, the real action is just starting at an equivalent elevation, so if the world’s star cyclists find it tough in the rarified air APPROACHING the Galibier, spare a thought for the cardiovascular systems of the mostly amateur riders who take on the Taiwan KOM.

The next big ramp on the road to Wuling comes with 7.5km to go and it’s a really doozy. Just try imagining a gradient of 27 percent for a whopping 300 metres. This is the most talked about section of the Taiwan KOM literature, but there’s actually a steeper and slightly longer wall just a little further up the road.

Even with a 50-34 compact crankset and a 32-11 cassette fitted on the rear wheel, getting over these hurdles is tough. Indeed, many people, including some of the pro riders who’ve underestimated the task, end up dismounting, but it’s no walk of shame. There have even been stories of people pushing their bikes going faster than those still clipped in. 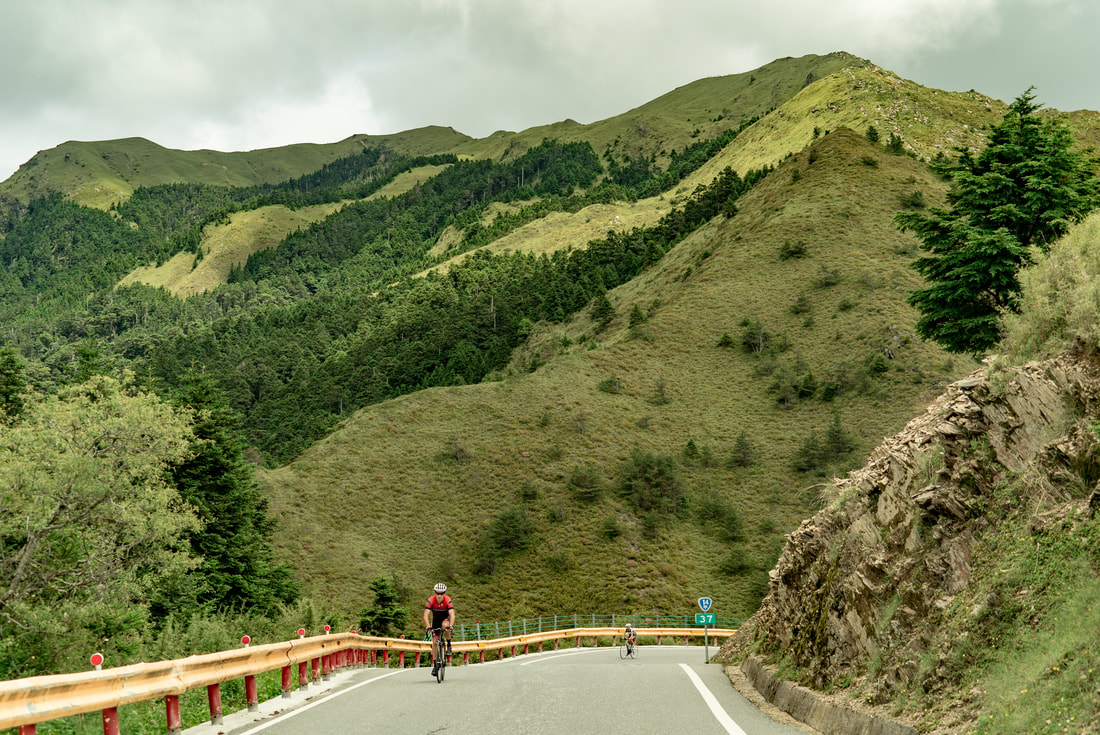 Your writer grinds up one of the walls. While the photos does justice to the surroundings, it doesn't quite reflect the severity of the slopes
And then there’s that 5km marker.

The many tunnels on the route mean the Garmins and other GPS computers frequently lose their signal to the satellites, and that coupled with the distinct lack of distance markers, can bring an element of confusion, at least it did for me, as to how far there is to go. Maybe my oxygen-starved brain played a part too, but whatever the circumstances, the sight of that sign piled on a load of mental pain to the abundance of the physical stuff already racking my body.

By this point, though, the first tantalizing glimpses of the summit have appeared in the distance, and his helps the mind refocus. Grind, weave, sing a song, chant mantras, break the distance down into 100m chunks, just do whatever it takes to get the job done.

If the entire final 5km section was uphill, perhaps it would really break the hearts and souls of the riders, but with 2km to go, the gods that guard Mt Hehuan throw the cycling pilgrims a bone with 1,000m of downhill. The descent doesn’t last long, but it provides a much-welcomed if brief period of recovery before taking on the final step to glory. Once again, the bare numbers – 1.5km at 9 percent – don’t tell the full story, but anybody who has gotten to this point is going to finish.

And then it’s done, the task is complete and those endorphins are released. The pain is gone and before too long, as the magnificence of being at the top of Taiwan sinks in, plans start to form in the mind of how to do it better next time.

Alan Grant took part in the 2017 Road to Taiwan KOM as a guest of the Taiwan Cyclist Federation and the Taiwan Tourism Board. The climb to Wuling was just the start of an epic week-long cycling adventure in Taiwan, further details of which will be presented in the next installment.

For details of how to enter the 2017 Taiwan KOM Challenge or either of the 2018 Road to Taiwan KOM sportives, click on the www.taiwankom.org link.
Proudly powered by Weebly