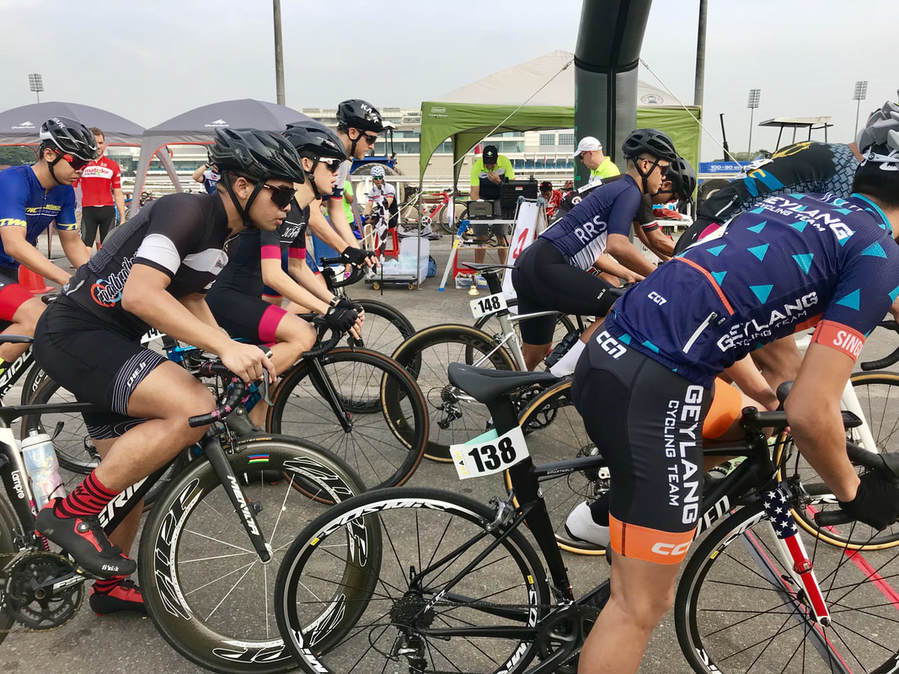 August 6, 2018
The local road racing scene broke new ground yesterday with a morning of “speedway” action at the Singapore Turf Club, but it was familiar names in the winner’s circle as Riyadh Hakim (Team Awano Treknology) continued his run of recent success by triumphing in the Men’s Open contest and Chelsie Tan (BikeLabz Racing) followed up her success at last week’s URA-CFS Crit with victory in the Women’s Open race.

While the bureaucratic and logistical hurdles that prevent proper racing on Singapore’s roads have been well documented, hard work and creative thinking by the major stakeholders in the sport over the past two years have resulted in a string of successful short-course events that are helping to fuel the growth of competitive cycling here.

The latest occasion for local roadies to scratch their competitive itch was yesterday’s ActiveSG Singapore Cycling Challenge and the response from those in attendance at the Turf Club in Kranji was overwhelmingly positive.​

Thanks to the efforts of GetActive, SportsSG, the Singapore Cycling Federation and events firm Cycosports, access was granted by the Turf Club to the concrete safety track that runs inside Singapore’s grand horse-racing course. Oval shaped, well-surfaced and 1.7km in length, it proved to an excellent circuit for some short, sharp speedway action. 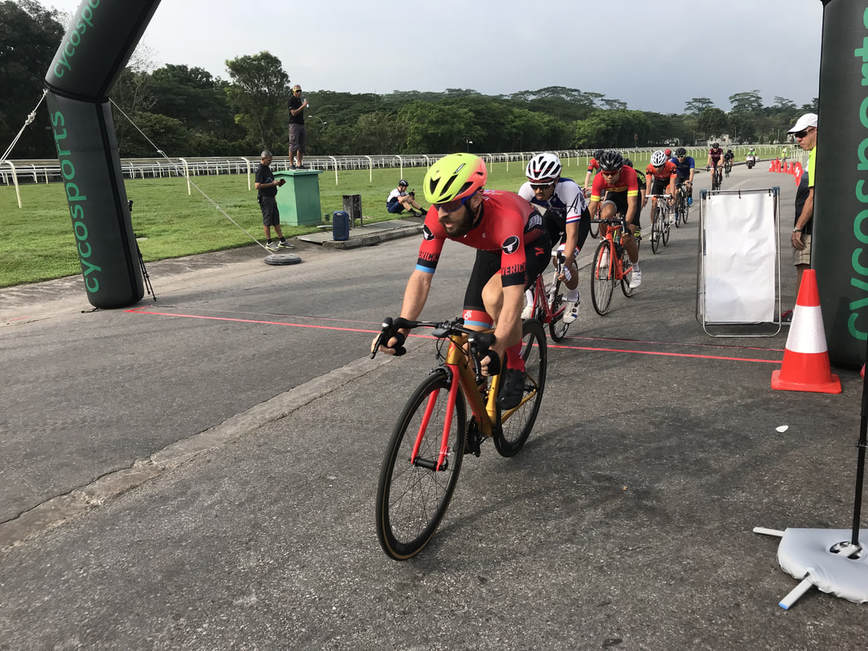 Three heats of Men's Open racing started the action
Due to the test nature of what was termed a “pop-up” event, registration numbers were limited, but the program still included separate races for Men’s Open, Men’s Super Masters, Men’s Masters, Juniors, Women’s Open and Mixed Duo. The format for all the individual races was four laps of the track, while the Mixed Duo pairs rode three laps each.

The track was relatively narrow so the starters were capped at 12 per race. All the categories were straight finals except the Men’s Open, which featured three heats, with the first four from each of those qualifiers moving forward to the final.

It was those heats that started the action off at around 9am after all the competitors had completed a few familiarisation laps of the circuit. The setting was surreally splendid, with the racecourse hemmed in by the majestic grandstand along the home stretch and banks of well-manicured vegetation on the other three sides. The turf that hosts mighty contests of equine excellence, was thick, lush and green, a stark contrast to the concrete “cycling” track. But it proved perfect for the assembled riders.​

As the procedures for the event meant that all riders, officials, volunteers and supporters had to enter and leave the arena en masse, a captive crowd was present for each of the nine rounds of racing, and with most of Singapore’s cycling clubs/racing teams represented, a real community vibe prevailed. The weather played kind too, with some cloud cover keeping the temperatures down yet not yielding any rain.
Next on track was the Women’s Open race, which proved to be a much more cagey affair than the Juniors contest, with the entire field staying together for the first three laps. The race exploded into life on the last lap, though, and as the leaders approached the final turn, a five-way sprint for glory unfolded. Chelsie Tan proved to have the strongest legs of the five, although only just, with her margin over the runner-up Ashley Jenna Lui (Team Cycleworx) a mere tenth of a second. Chawaree Termtanan (Guerciotti Racing Team) rounded out the podium in third place.

Tan savoured her victory and was effusive in here praise for the event and for her desire for more of the same.​

“I really like this place. The course is amazing. I would like for us to come back here and I would love it if we could have more regular races like this in Singapore,” Tan said.
The Super Masters (45 years and above) rolled onto the start line for the third final of the day. This was no cagey affair, although team tactics definitely played a roll in how the action unfolded. Alan Grant (Specialized Roval Mavericks) attacked three times in the opening two laps before finally getting away with Ronnie Yap (Road Bros) firmly glued to his wheel. Pre-race favourite and perennial winner Ben Arnott (Specialized Roval Mavericks) sat safely in the bunch until midway through lap three, when he bridged to the break then soared passed it to take a fine solo win. It was the only final of the day not to feature a sprint finish. Taking second place for the second week in a row was Keiichi “Dr Avocado” Hayashi, with Fathul Rahman Mohamad (Road Bros) finishing third.​

The Masters race (35-44 years) was dominated by the team from MatadorRacing and while they did deliver the win, they had to earn it. Having four men in a small field meant the Matadors could constantly attack, and this they did, but Ruairi Brown (Specialized Roval Mavericks) and Marcus Hancock (Integrated Riding Racing Team) were up for the task, and that pair were the only riders still with the Matador quarter when the bell sounded for the last lap. Perfect tactics on that last trip around the 1.7km circuit saw Romain Barbier drop off sprint specialist Kelvin Khoo into the lead on the home stretch, and the Matador man duly finished it off in a time of 9 minutes 14.77 seconds, making it the fastest race of the day by a considerable margin. Brown was half a bike length back in second, with Hancock coming through for third. 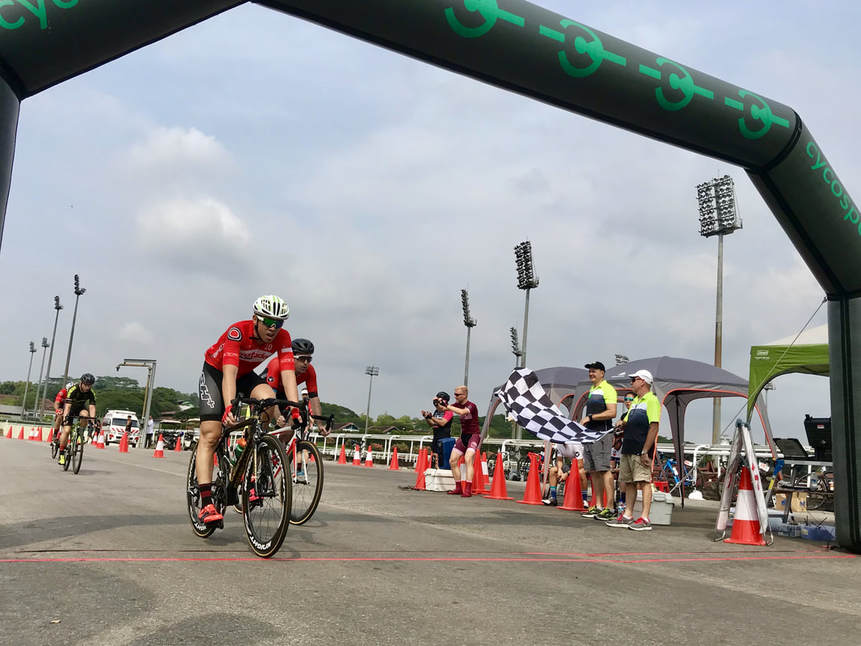 Kelvin Khoo takes the Masters chequered flag
The Men’s Open final contained a quality field, with any of the 12 names on the start list capable of winning the race. Cagey was gain the key word for the opening two laps, but approaching the first turn on lap #3 Junaidi Hashim (Team Awano Treknology) put down the hammer on the outside of the track and powered away from the bunch. Such was the venom in the attack that Junaidi had a lead of some 15 seconds at the bell, and with the bunch all looking at each other when they came past the crowd, it looked like a shoo in for Team Awano leader. However, with a headwind in the back stretch and an at-last motivated pack led by an almighty pull from Lance Tan, the gap began to dwindle.

With a swift reversal of fortunes, Junaidi was about to be captured but his huge effort wasn’t in vain as the final moves to catch him by Elyas Yusoff (Team Cycleworx) then Bastian Dohling (Specialized Roval Mavericks) had the result of stringing out the field and leaving his teammate Riyadh perfectly poised on Dohling’s wheel as they came out of the final turn and onto the home stretch. He certainly doesn’t look like a sprinter, but Riyadh’s slim frame obviously holds some big watts within, as he held off the powerful duo of Luqmanul Hakim (TWC Racing) and Haikal Johan (Romeo Racing Spirit) for yet another win to add to the triple crown of Under 23 Singapore national titles he claimed last month. ​
The youngster is returning to his preferred trails for some cross country racing in KL late this month, before coming back to Singapore for Jungle Cross III on August 28.

Having conquered all on road and mountain bike recently, we asked if he’d consider trying his hand at the cyclocross race at Jungle Cross III.​

“Maybe, maybe,” he said with a smile as his Awano teammates egged him on.

The race program finished with the Mixed Duo event. Six teams lined up, with the women riders from each pair starting first. They finished their three laps all together then parked their bikes before running over to their waiting male partners to hand over a bidon containing the timing chip. The riders may have changed but the pattern was more or less the same, with five of the six teams still together at the bell. The speed ratcheted up on the final lap and the crowd was treated to yet another sprint finish as two riders, Lance Tan (Mellow Yellow) and Joel Hong (Integrated Riding Racing Team) hit the stretch ahead of the rest. Track star Tan proved the strongest and so was joined on the top step of podium by teammate SarahTan. Hong and partner Sherrina Chen took the silver medal, while Marcus Hancock and Jeynelle Lee (Integrated Riding Racing Team) finished third.​ 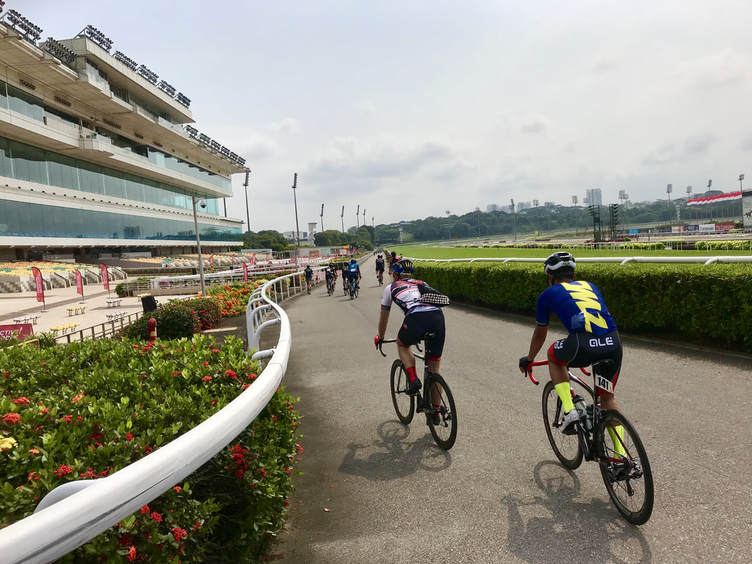 The Singapore Turf Club was a grand setting for a bike race
The occasion was an undoubted success and the revelation post-race that negotiations are going well to secure more access to the Turf Club track was received very well. The only negative to come from the morning was the non-attendance of a fair number of the registered competitors. Due to the test nature of the event, limited spots were available  for each of the race categories, and they were snapped up quickly. The no-shows therefore prevented others from enjoying the speedway experience.

For full results of the GetActive Singapore Cycling Challenge click on the Cycosports results page.
Proudly powered by Weebly