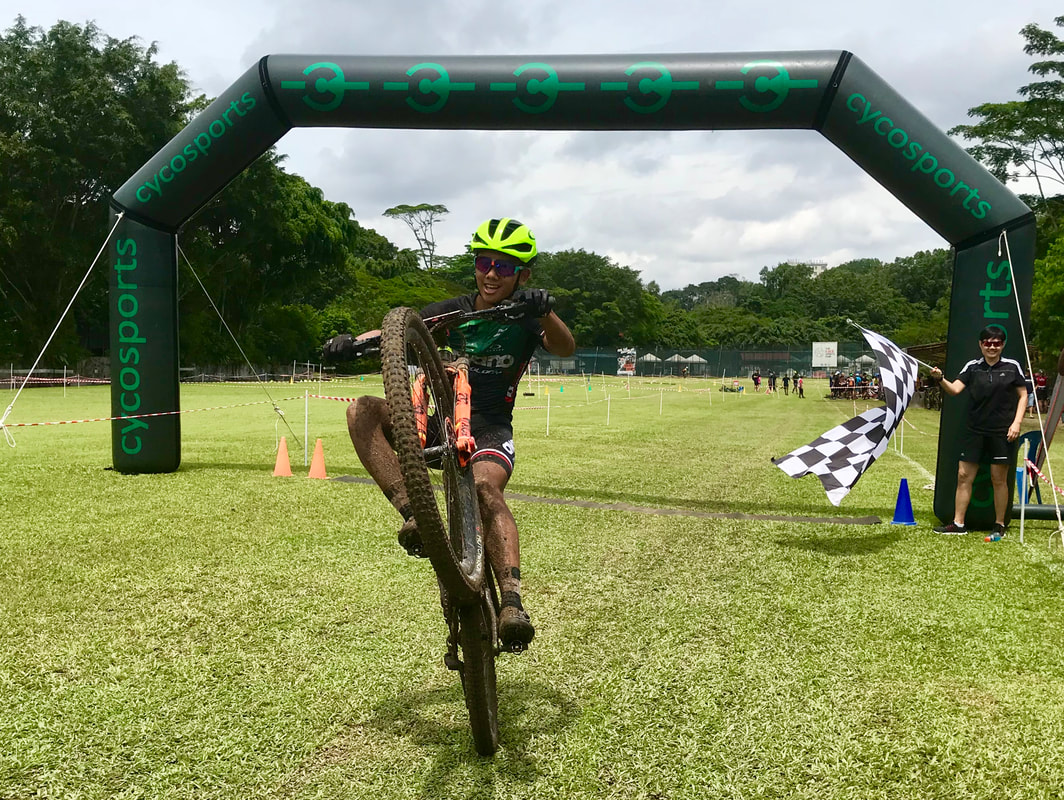 November 9, 2018
Singapore’s competitive cycling scene drew to a close for the year on Tuesday with the concluding leg of the Cycosports Jungle Cross Series at the Centaurs Sports Park in Turf City. The record books will show Riyadh Hakim (Team Awano Treknology3) and Bastian Dohling (Specialized Roval Mavericks) as the big winners for triumphing in the Men’s Open MTB and Cyclocross events respectively, but the day was a true celebration of local cycling, combining a string of races with the opening of the Singapore Cycling Federation Academy, the SCF’s new youth training centre.

Jungle Cross V unusually took place on a Tuesday, thanks to the public holiday for Deepavali (Diwali), the Hindu festival of lights. With the absence of all the usual weekend sporting activities that often clash with cycling events, a bumper crowd of racers and supporters turned up and they came to have fun as they turned the covered transition area into a party zone complete with at least three BBQ stations and plenty of liquid refreshments.

The weather conditions were perfect as the first round of racing began at 8am; overcast, not too hot and with precipitation unlikely. However, after a fair bit of recent rain and a big downpour the day before the race, the conditions on the ground were a stark contrast to the dry tracks presented to the riders in the previous round of Jungle Cross in August. Still, off-road cyclists love a bit of mud and so they took to the jungle trails with gusto. 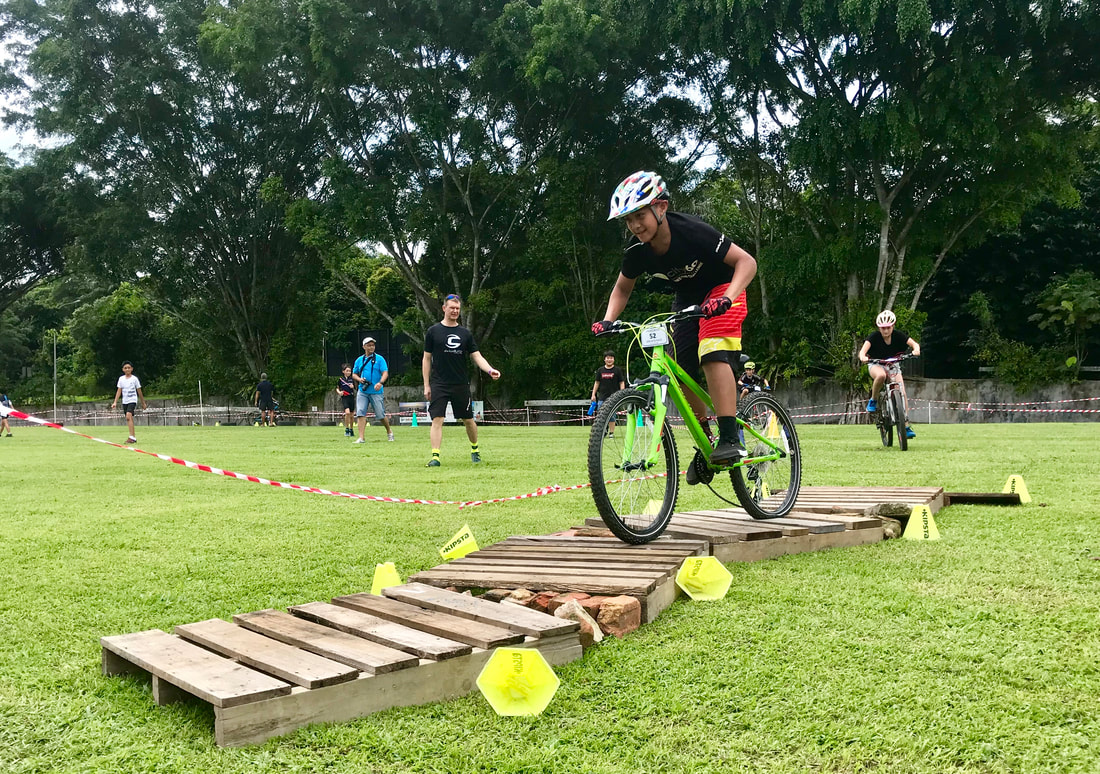 The kids were all right at Jungle Cross V
First up were the Sports and Junior B mountain bikers, as well as the Cyclocross Open riders. The two disciplines started a minute apart, and while they shared the opening grass-field section of the course, after 700 metres their paths diverged, with the mountain bikers sent deep down into the Pit on a circuit suited to their thicker tyres and suspension, while the CX riders got to avoid the worst of the roots and mud with a less technical layout. The cyclocross men (there were sadly no women racers yesterday) got plenty of their own technical fun, though, as they covered six laps of a course that featured a series of barriers, a set of truck tyres and the popular spiral.

​One man flew out of the gates in that Men’s Cyclocross Open race, Pierre-Alain Scherwey, and the Allied World Treknology3 rider quickly opened up a sizeable lead. But unfortunately for the big Swiss he took a wrong turn upon entering the wooded section of the course. Compounding his misfortune was a puncture and while he eventually found his way back on course and rode the rest of the race with the flat tyre, he was out of the running.

The chasing pack led by Dohling weren’t initially aware of Scherwey’s troubles and for a large part of the race thought they were contesting for second place. That battle for glory eventually split into two pairs, with Dohling enjoying a tight tussle with Andrew Fang up front, while Alistair Reed (CyclingTraining CC) and Bin Chye Tan had a close race for the final spot on the podium. Dohling eked out a few seconds on Fang on each lap which eventually saw him take the chequered flag with a 43-second winning margin, while Reed held of Tan by just 12 seconds to take third place. 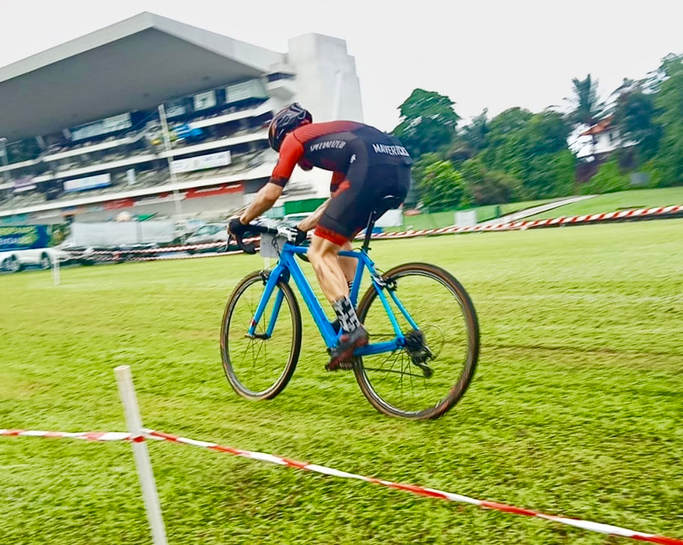 Dohling on his way to CX glory. TheTurf City grandstand is always a great backdrop to the Jungle Cross racing (photo: @georgifranci)
​In the Men’s MTB Sports, Abdul Halim Abdul Malik (Harding MTB Racing Team) put on a dominating performance to win comfortably by over two minutes from Sheikh Ahmad (Twenty9er Racing Team). Haziq Nazid rounded out the podium.
​
A decent-sized field of 13-16 year-olds contest the Junior B mountain bike race, and it saw a come-from-behind victory for Jonathan Tan (YBCO/BikeAid Racing). The early running was done by Mohammed Syaheed Ismail (Harding MTB Racing Team) and he was well ahead after two of the four laps. But Tan was plugging away and was only just behind at the bell, before putting in a devastating final lap to take a clear win. Ismail’s performance was still good for second place, with Sathya Simman rounding out the podium.

​There were only two entries in the Women MTB Sports, but it was a  closely fought race for the first three laps between Andrea Trindler and Leisbeth Kanis (both Anza Cycling ), before Trindler pulled away on last lap to win by nearly a minute.

The Women’s Masters and Women’s Super Master’s fields were even smaller, with Sybil Foo (Team Trail+) and Louise Donaldson (Singapore Bike Hash) winning those races uncontested. There were no starters in the Women’s Open MTB and Cyclocross events. While female participation numbers are on the rise in local road cycling races, this sadly is not the case in the off-road scene. 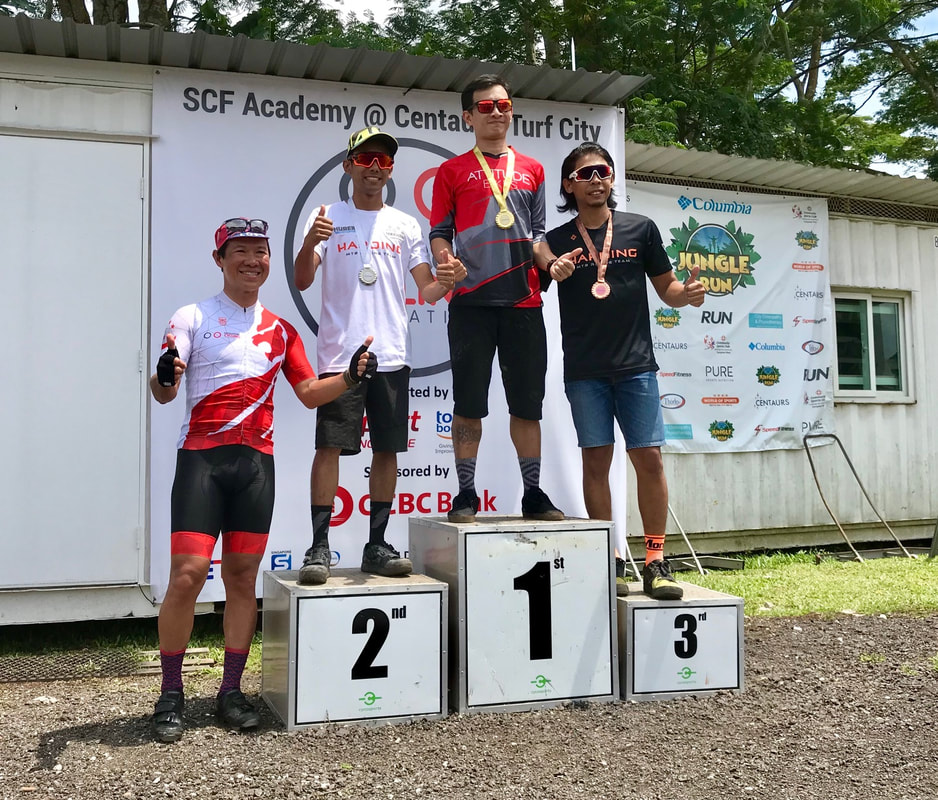 The All Mountain podium
​The next round of racing kicked off just after 9am and saw the Men’s Super Masters, Junior A and All Mountain contests.

All Mountain Open. The long-travel racers did three laps of Elite course and was one of the biggest fields of the day. Almost a one-man show with Walton Seah (Attitude Bikes) putting in a wire-to-wire performance. Won by almost three minutes from Mohammed Shafiee  Mohammed Salim (Harding). Good battle for second with Harding teammate Rohaizat Mohd Hashim for two laps, pulled away on last lap.

In the Super Masters race 2018 Singapore national champion Alvin Lim (Team Entro Cycles) enjoyed a dingdong battle with Noel Reuter (Singapore Bike Hash) for two laps before pulling away with his fastest lap on #3. Reuter’s troubles saw him nearly overhauled for third by Rik Oberoi, but he held on to the runner’s-up spot by 10 seconds.
​
The Junior A race only had two starters and Ahmad Safiy Rahudin (Team Awano Treknology3) won it at a canter from Ian Miqal Ramli. 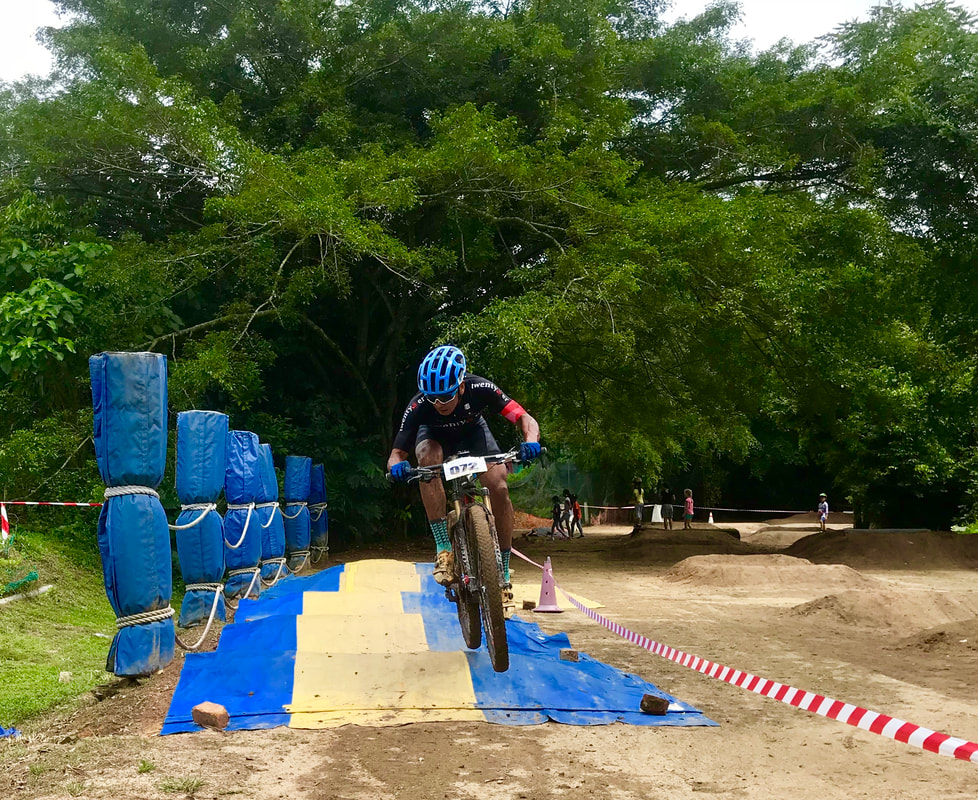 Mohamad Faizal Rawi flies over the mini-pump track bumps
The Men’s Open and Masters races closed out the day, with the elites facing five laps of the Pro course and the Masters going round the circuit four times. The Men’s Masters title went to Mohd Herman Mohd Arsek, with the Harding MTB Racing Team rider putting in a dominating performance to win by over 6 minutes from Mohamad Faizal Rawi (Twenty9er Racing Team). Kelvin Khoo (MatadorRacing) took the final spot on the podium.

In the Men’s Open race, the new army recruit Riyadh was obviously a man with a mission as he shot out the gates and opened up an immediate lead which he never relinquished. He emerged out of the jungle after lap #1 with a comfortable 20-second gap on his teammate and mentor Junaidi Hashim, while the other Awano man in the field, Muhammad Aidil Taufid, was a similar gap back in third. The only other contender at this early stage in the race was Anthony Brown (Cannasia Absolute Black).

An indicator of the difficult conditions on the day was the fact that Riyadh’s opening split of 14 minutes and 6 seconds was some 80 seconds slower than his first lap when he won Jungle Cross III in August. 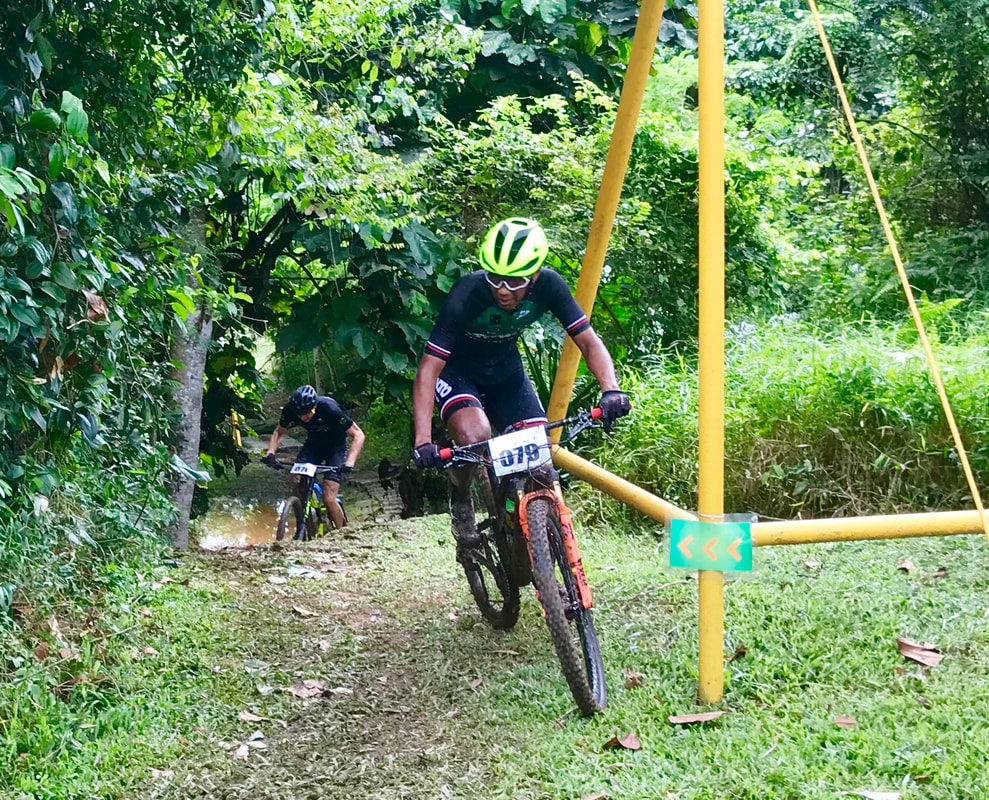 Anthony Brown and Junaidi Hashim have been chasing each other all year
​Muddy or dry, it doesn’t seem to matter to Riyadh, and the youngster showed his prowess by increasing his lead lap by lap on his way to a dominating victory. The three chasers weren’t separated by much after lap #2, but it was Aidil who eventually emerged as the strongest of the pursuers during lap #3. While he was moving into a clear second place that he maintained all the way to the line, an intriguing battle was building behind between Junaidi and Brown for third. The two “veterans” have enjoyed a great rivalry over the past few years, and on this occasion it was Brown who got the upper hand.

But it was all about Riyadh up front and the Awano man pulled off his traditional wheelie as he triumphantly crossed the finish line after completing his five laps in a time of  1 hour, 16 minutes and 47 seconds. That was a full 10 minutes slower than his Jungle Cross III total, but it was still nearly 2 minutes faster than the runner-up Aidil, with Brown another 40 seconds back.
​
Riyadh made it look easy, but he insisted it wasn’t.

“No, it was tougher than all the previous races this year,” he said. “The last few days the trails were quite dry but today it got quite muddy because of yesterday’s rain and so this made it quite a tough course. Also, I didn’t want them to catch me so I just pushed all the way, pushed 100 percent.”

Riyadh enjoyed a fantastic year on the bike, winning three Singapore national titles in the Under 23 division, as well as a host of other races, but it might get a bit tougher for him next year as he’s recently been called up to serve for his national service in the Singapore Armed Forces. 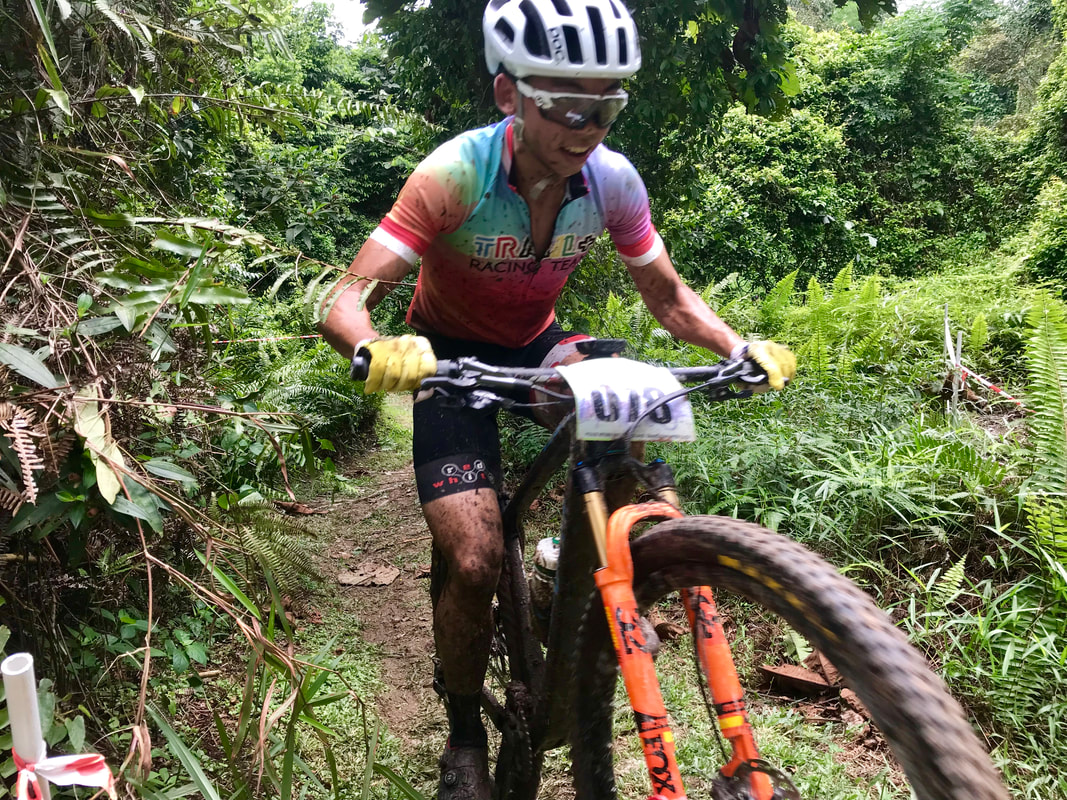 Yong Liang Mun didn't make the Open podium but he put in a great shift on the tough Jungle Cross course
“I feel like I’m already slightly less fit because of all the training in NS. I don’t have as much time to train on the bike,” he revealed.  “For now we’re still in the basic military training, which is about nine weeks. I’m halfway through that and after the nine weeks we’ll go to our unit, but I’m still unsure where I’ll be going. If a go to a command school it will be harder for me to train as I’ll have less time.”

We asked if he was hopeful of getting some time off NS to train under the scheme for prominent national athletes?

“I’m not sure if my results from the past few years will be enough. I don’t have a SEA Games medal or something similar, so it’s going to be pretty hard,” he said.

He ended his post-race interview on a more positive note by praising the carnival atmosphere.

“For the final race in the series, it’s so cool to have the BBQ and we’ve got the most people I think for the series, it’s a great community. And also for the Juniors and kids, the numbers are growing with every race, that’s pretty cool too,” he said. 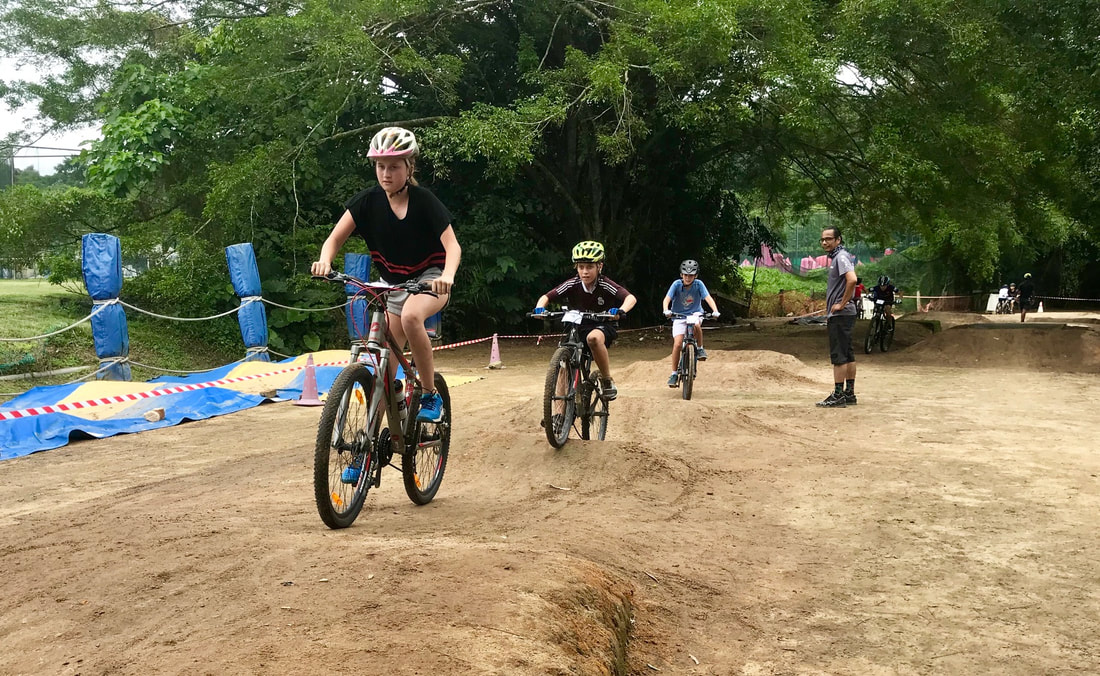 Boys and girls of all ages, shapes and sizes had a blast in the kids races
While Riyadh and his fellow elites were out racing the grande opening of the Singapore Cycling Federation Academy was in full swing. After a skills clinics the multitude of youngsters in attendance were set of in a series of races that took in the ever-expanding mini-pump track as well a taped-out course on the playing fields. The kids certainly got a kick out of their time in the spotlight, but the mass of parents, friends, families, coaches and adult racers lining the course may well have got a bigger buzz from what was an inspiring event.

And that was that for competitive off-road cycling in Singapore for the year. The five-date Cycosports Jungle Cross Series will return in 2019 and the national championships are slated for July, but let’s hope the SCF and some other events companies can stage a few competitions too.

For full results of Tuesday’s races, click on this Cycosports link.
Proudly powered by Weebly