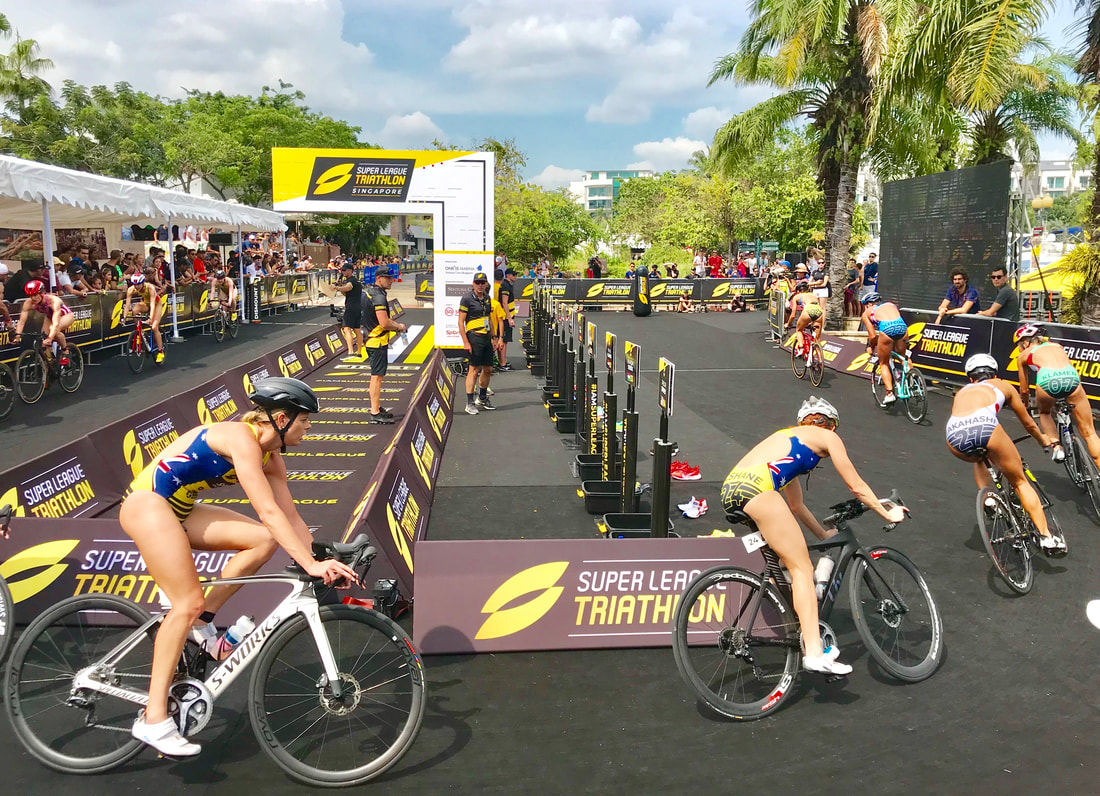 March 1, 2019
Like many other local members of the triathlon community, I was delighted when it was announced that Super League Triathlon was bringing its stable of superstar athletes to Singapore for its season-ending championship, but I wasn’t the only person to express my doubts when the location for the two-day event was revealed as Sentosa Cove.

While the main beaches on the southern shores of Sentosa – Tanjong, Palawan and Silosa – have been home to many successful triathlons/aquathlons over the years, I wondered how the little luxury enclave at the eastern end of the island could possibly squeeze in a swim-bike-run course, never mind one to host a world championship-calibre event.

For a start, where were the athletes going to swim, in among the boats in the marina? Turns out they were, with the moored yachts providing a spectacular backdrop. And then there was a criterium circuit for the cycling! What genius came up with the idea of throwing a crit slap bang in the middle of a triathlon? What a masterstroke! As was the entire decision to hold the event at Sentosa Cove on a compact site ringed by restaurants and bars; my doubts about the location proved to be completely unfounded.

Indeed, the two-day event, which culminated with a pair of thrilling races last Sunday afternoon, was quite possibly the most dynamic sporting event to hit these shores in recent times 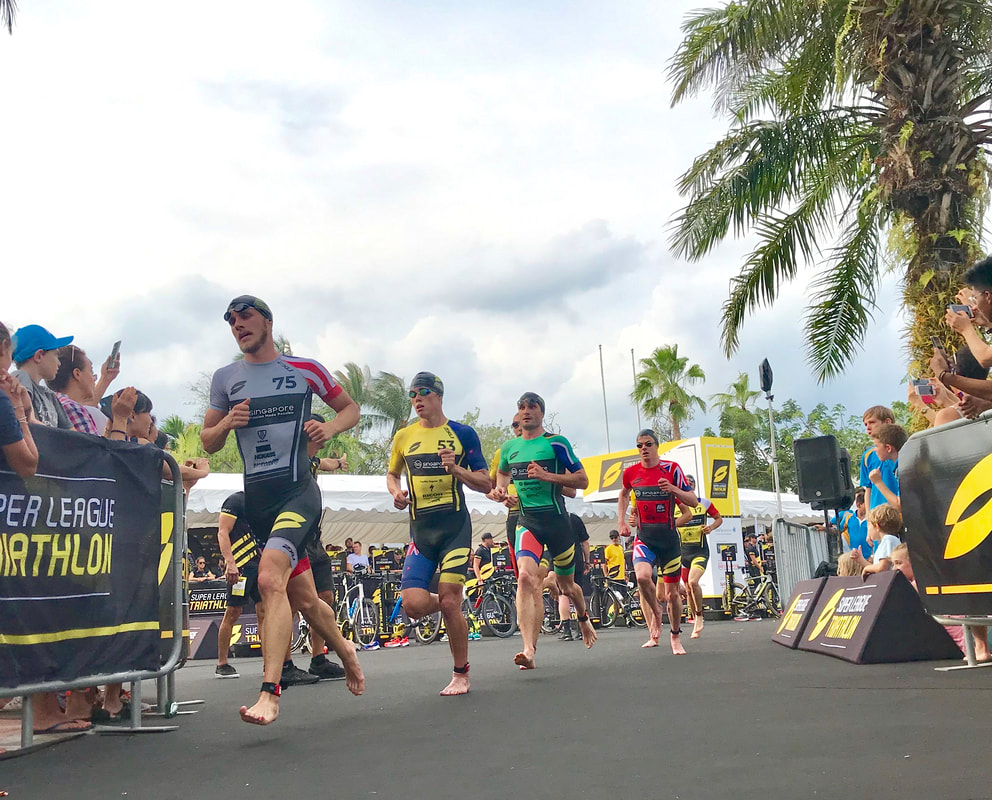 The men running back towards the Marina for their second swim during last Sunday's Enduro race
I’ve been attending triathlons for the past 14 years both as a competitor and as a spectator, and my affinity for the sport is definitely based on taking part rather than standing on the sidelines as a fan or a reporter.

Aside from watching the athletes entering/exiting the water, getting on and off the bike, and running down the finishing chute, there isn’t much to see at most traditional triathlons as the vast majority of the action takes place well away from the central race sites.

But in just two years Super League Triathlon has turned the sport on its head with its emphasis on ultra-short courses tackled multiple times in a variety of formats. Cramming everything into a small space keeps the athletes within eyeshot of the spectators for more or less for the whole race, end even when they do slip momentarily out of range, a big crew of film production crew, enthusiastic commentators and well-placed big screens mean not a second of the action is missed.

This exciting reinvention of the triathlon wheel could well be the driver that ends up turning swim-bike-run into a mainstream spectator sport. 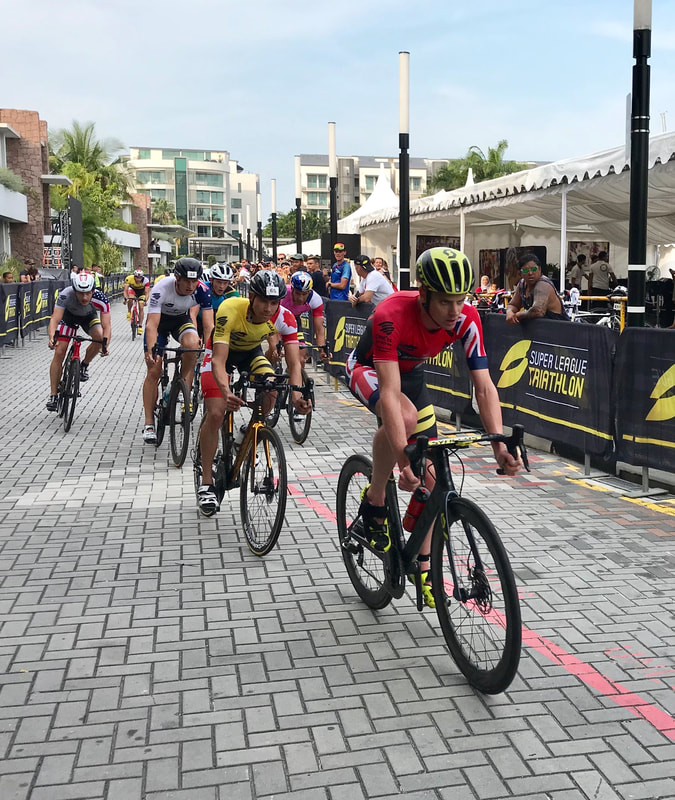 Jonny Brownlee can often be found on the front during the bike leg
Just ask the crowd who witnessed the Sunday afternoon drama at Sentosa Cove as the French pair of Cassandre Beaugrand and Vincent Luis took the women’s and men’s Enduro titles in dramatic fashion to bring a spectacular weekend of action to a close.

Super League is an equal-opportunities concept with the 25 male and female pros tackling the exact same course and distance, and being rewarded with the same prize money. For what is still widely regarded as a niche sport, mind-boggling sums of money were handed out over the weekend, including cheques for US$100,000 to Luis and the American Katie Zaferes for being crowned the overall series king and queen.

The battleground for the battle of riches was that unlikely Sentosa Cove venue, where a 350-metre swim course and a 1km cycling/running circuit were all that was required. Each swim-bike-run segment consisted of one lap of swimming, five laps of cycling and two laps of running.

Sounds short and very simple but the athletes had to tackle the entire course three times on both Saturday and Sunday, although the formats were different for each day.

Saturday hosted the Eliminator where five athletes were cut after the first swim, bike and run. Racing over such a short distance and with so much at stake is super intense, and to keep the pressure up, the survivors of round #1 barely got time to gather their collective breaths before being sent back out for round #2. Another five competitors faced the chop this time around, which after another short break, left 15 racers to battle for the cash and the important ranking points in the final. 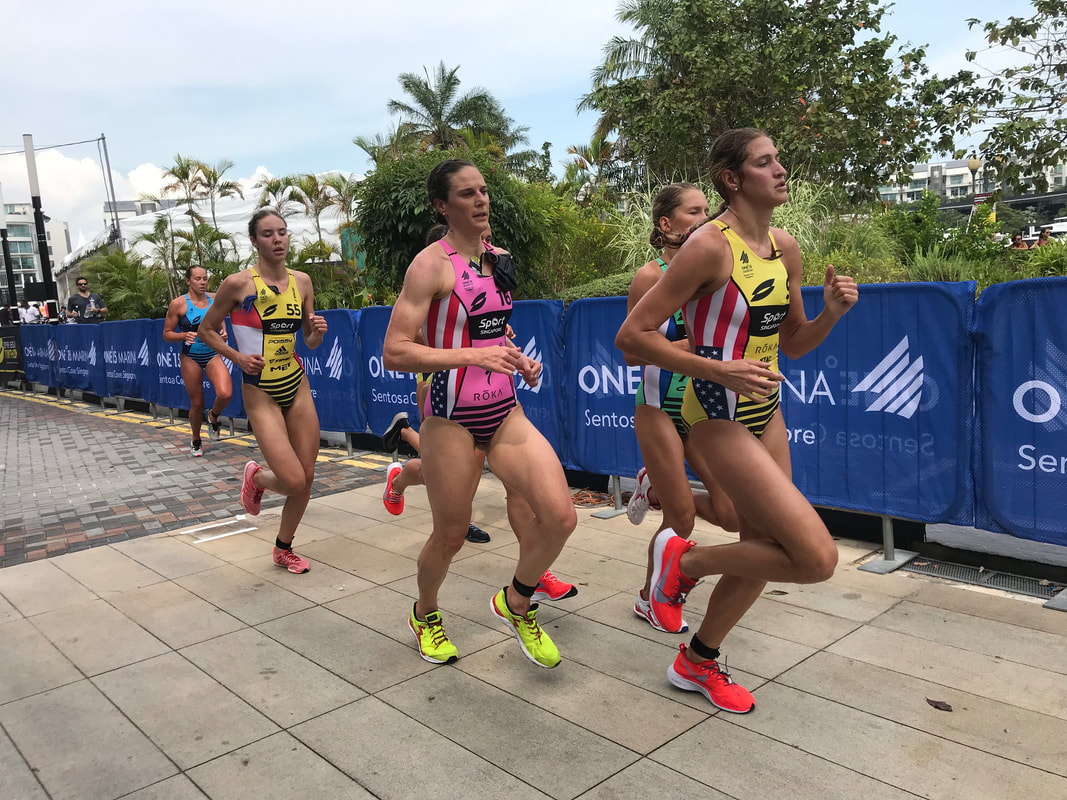 Karen Zaferes (in pink) looks to be in the most pain but she only lost Sunday's race by a whisker and clinched the series title in dominating fashion
Britain’s Jonny Brownlee proved to be the ultimate survivor in the men’s race, as he beat Canada’s Tyler Mislawchuk and Hayden Wilde of New Zealand into second and third.

The women’s Eliminator glory went to the racer who had dominated the whole 2018 Super League season, Zaferes, with Beaugrand the runner-up and Ashleigh Gentle of Australia rounding out the podium.

While the crowd size was decent on Saturday, it was noticeably bigger on Sunday. An amateur/corporate relay event and an Asian under-19 championship held on the undercard no doubt helped swell the crowd, as the competitors from those contests and their friends and family hung around for the main event. Having a civilised 3pm start time was also a spectator-friendly move; the restaurants, bars and hospitality tents that lined the course got busier and louder as the afternoon went on and the weekend came to a close.

Sunday’s racing was called the Enduro and this time there were no breaks between the three sets of swim-bike-run. But the Enduro also had an “eliminator” element to it, and it was of an even crueller variety as the initial cut came after the first swim, with two athletes being yanked out. The eliminations then kept coming at each transition until just a Super Six were left for the final showdown on the third bike and run legs. 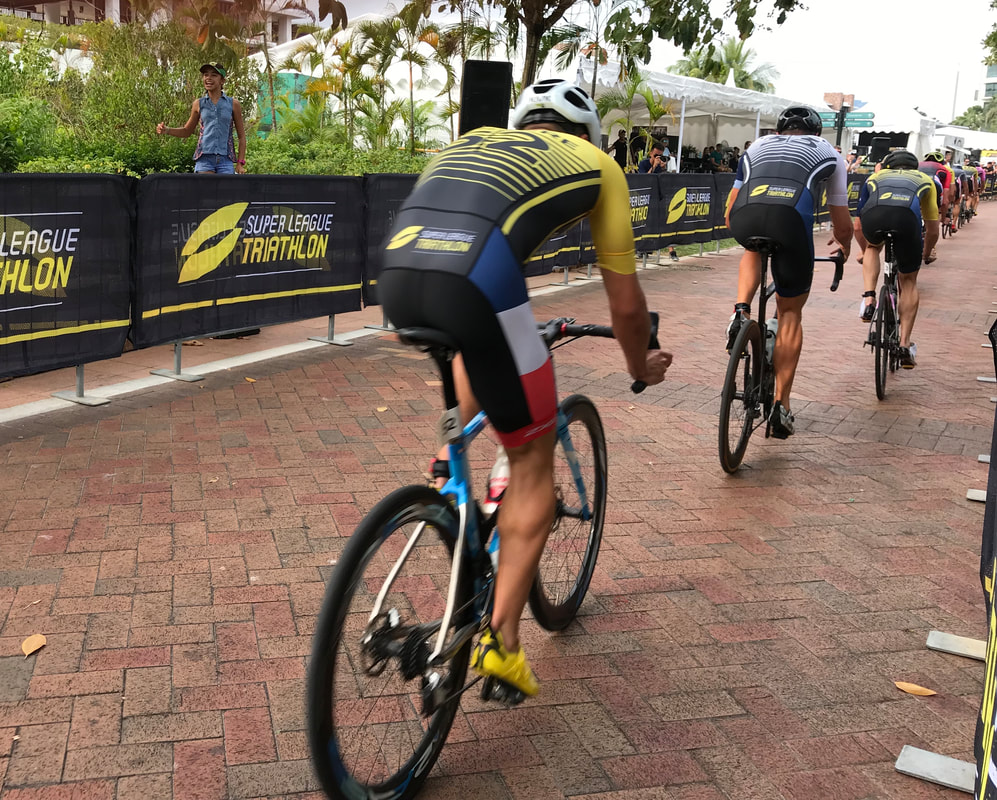 Imagine having to do three triathlons back to back. In the tropical heat and humidity of Singapore. And on such a short, intense course. Right from the start that first swim had to be done at full gas to try and stay with the pack to stave off the cut, then onto the narrow and technical bike course with its chicane, 90-degree corners and a u-turn, and finally the lung-bursting and leg-sapping two laps of the run course. Then do it again … and again.

Can there be any sporting event so intense as a Super League Triathlon Enduro race? Brownlee doesn’t seem to think so.

“I think Sunday is going to be the hardest triathlon I’ve ever done,” he said two days beforebn the Singapore Enduro. Big words from one of the most decorated short-course triathletes of all time.

And can there ever have been a more thrilling women’s triathlon race than was put on last Sunday at Sentosa? The lead changed four times in the last 500m as Zaferes and Beaugrand attacked and counter-attacked each other before throwing themselves at the line together in what in an age gone by would have been a dead heat. But photo-finish technology exists for a reason and the final freeze frame gave the win to Beaugrand.

The men’s contest was another cracker and while it didn’t have quite the same dramatic ending as the women’s race, it still held the crowd rapt throughout with a constant pattern of breakaway groups and chasers desperately trying to get back to the front. 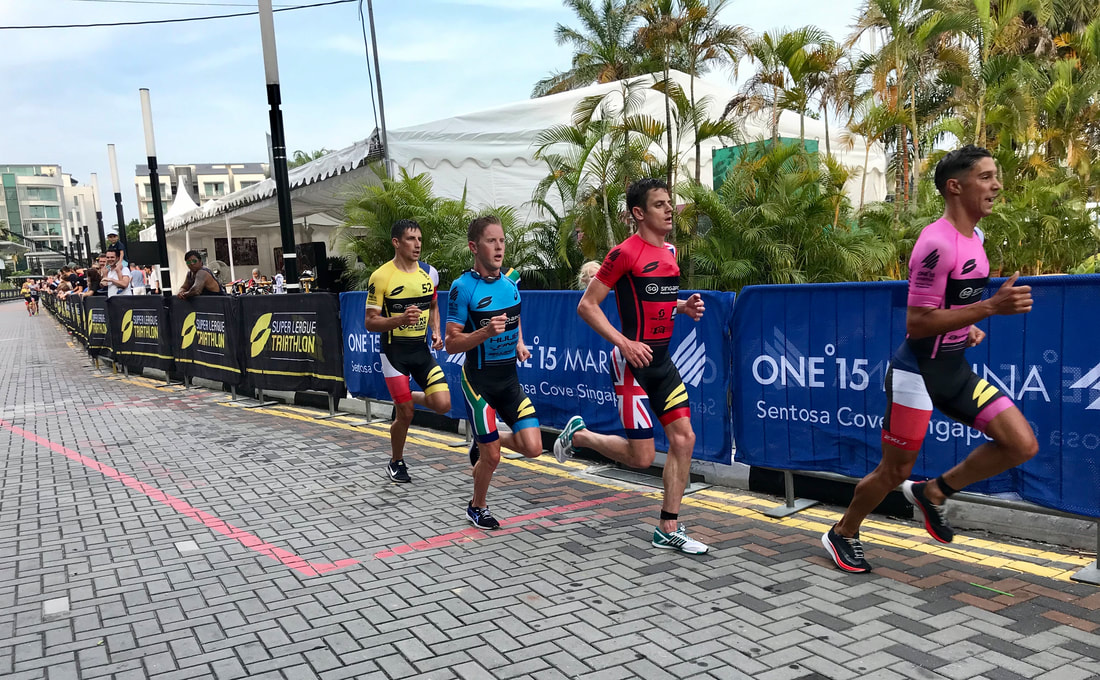 Vincent Luis taking it to his main rivals during last Sunday's Enduro race
The finale saw the series leader Luis redeem himself after an unfortunate early exit on Saturday due to a puncture. The Frenchman found himself in a three-way fight for the title with Brownlee and Schoeman of South Africa as they entered the final 2km run, but when Luis dropped the hammer within the last 1km, the others couldn’t respond and he strode on to break the tape and take the double glory of Singapore Enduro win and season-long series champion.

I expected to enjoy my Super League Triathlon experience having watched previous rounds on TV and online via Super League’s Youtube channel where they live stream all the action. But it definitely surpassed my expectations, and having seen it in the flesh, will now be sure to tune in to watch the 2019 season kick off in Bali on March 23.

With such a dynamic product and a continual introduction of innovations, Super League Triathlon will surely attract a bigger following, and you never know, it might drag swim-bike-run into the big time.

Go to www.superleaguetriathlon.com to find everything you need to know about Super League Triathlon and for the full results of last Sunday’s action in Singapore.
Proudly powered by Weebly