Here's how the Cycosports Pasir Gudang Circuit Race unfolded from the viewpoint of the Specialized Mavericks. 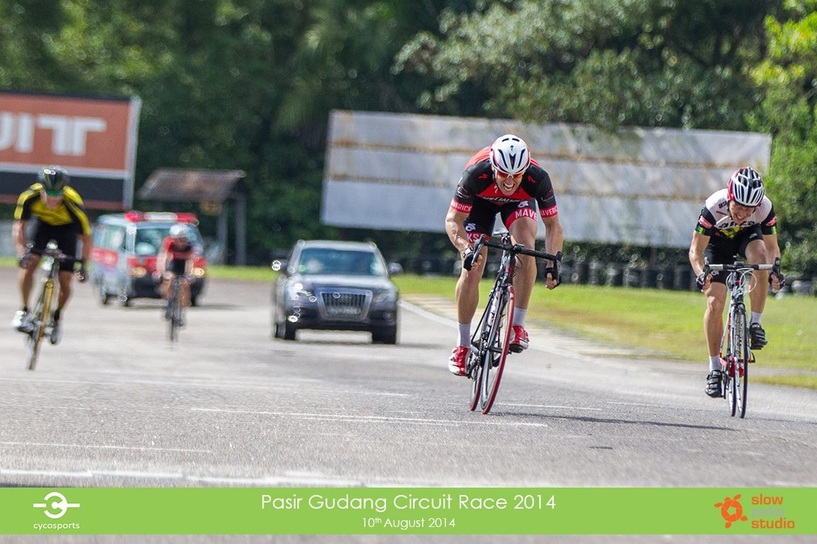 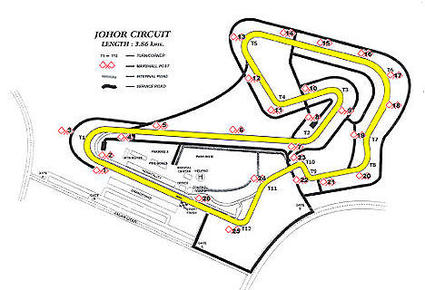 The Specialized Mavericks continued their winning ways at the Cycosports Pasir Gudang Circuit Race in Malaysia on August 10 with Matt "Pony" Lodge taking gold in the Cat 2 race, while Youcef "Walnut" Cummings and Jimmy "Pixie" Guardino landed sliver and bronze in the Cat 1 contest after losing out in the sprint to the visiting Samwel Ekiru of the Kenyan Riders team.

After three rounds on the Indonesian islands of Batam and Bintan, the penultimate race in the 2014 Cycosports Series moved across the Causeway to Johore and the delightfully ramshackle Pasir Gudang race track. Cycosports pulled off a major coup in securing the venue for the morning, with the four races around the 3.8km rolling circuit proving to be a resounding success.

With the good ship Cycosports not required for Round 4, most of the Mavs travelled over in cars, but a hardy few opted for a longer warm up by riding out to the circuit, which sits about 20km east of the JB Immigration and Customs complex.

On paper the circuit looked twisty and technical but this was a track designed for fast-moving motorbikes, so the corners turned out to be wide and flowing, with hardly a need for the brakes. In addition to the turns, the 3.8km circuit was hardly ever flat either, the 70 metres of elevation per lap telling its up and down story.

With no Mavs in the Cat 3 race, that first contest of the day provided a preview of what could be expected. While the pit and limited warm-up areas didn't allow for a view of the whole loop, the first few and last few corners were visible, and it seemed it was difficult for breakaways to succeed. 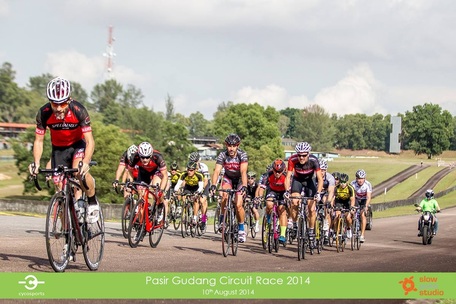 The format for the Cat 2 race was 60 minutes plus two laps, with Sprint and KOM primes thrown into the mix; these would be announced by the ring of the bell at the start-finish line and top of the "big hill" respectively.

Having won the previous two Cat 2 races in the series through Oldish and Waxo, the Mavs came to Pasir Gudang with great confidence and a plan: get the one-trick Pony the win! The big Welshman is renowned for his sprint but he had never managed to pull off a victory and so the pressure was on.

Of course the Mavs didn't put all their eggs in one basket, with three or four of the team tasked with trying to force a breakaway. The first few laps proved cagey and all attacks were chased down. The first significant action came with the bell sounded for the KOM prime. The "big hill" was only 200 metres in length but super steep so suited power sprinters rather than climbers. And so it proved with Waxo taking the honours next time across the "peak" after an admirable lead out from AmeZ.

As the peloton regrouped on the much longer and fast, sweeping descent, a group of six riders managed to create a gap. Pony found himself in the sextet and joining him were an Anza, a Joyrider, a Team Integrated and two Saxo Next Stage riders. With all the big teams represented, this move had potential and the group set about building their advantage in the knowledge their teams behind would be controlling the bunch. But after just one lap out front, the six became four, with neither Saxo rider able to hold the pace. The remaining escapees worked well together, sharing the pace-making evenly and the gap grew lap by lap. 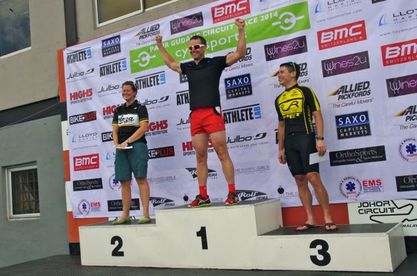 Pony and those shorts
When the bell rang for the Sprint Prime the crowd gathered eagerly expecting some action but as the quartet rounded the final corner into the home stretch, there seemed to be no contest; it almost looked like they were inviting each other to take it. But the Pony just couldn't hold himself back and just five metres before the line, he clicked into his big 54-tooth ring and sneaked the glory.

The main bunch came through 30 seconds later and the gap continued to grow until it had reached over a minute by the time the bell rang for the final time. So  with the winner definitely come from the break, surely the one-trick Pony had it in the bag?

The final 700 metres of the circuit are visible from the start-finish line and the four were strung out as they sped downhill and through a fast chicane. The Anza man Ian Burton and Pony had separated themselves from the other two, with the former rounding the final bend first. But the mighty Small Horse passed him as soon as the road straightened and powered away easily for the win. Burton took second, with James Loh of Integrated claiming the final podium spot.

The rest came through a minute later with that man Waxo taking the bunch line honours in fifth, while Chimp and Oldish also claimed top 10 finishes. This was enough for the Cat 2 squad to claim the team prize for the third race running.

Pony's win proved very popular with his teammates and a huge relief for the man who had been piling a lot pressure on himself to get a win. He celebrated by donning the notorious "Cat 2 podium shorts" for the presentation. 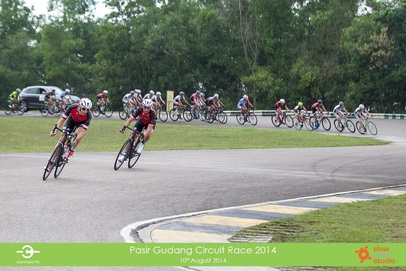 Pigeon and TimTam break clear on the chicane
Cat 1
Having gone for a less aggressive approach for Round #3 of the Cycosports series, the Batam Six Bridges race, the Mavericks Cat 1 team reverted to type with an "attack, attack, attack" plan for the PG Circuit Race.

In addition to facing the usual suspects from Cannasia, Lapierre, Joyriders and DirectAsia.com, there was added spice via the presence of the two Kenyan Riders who had dominated the DirTraction Celebration Series time trials the weekend before in Singapore. But that didn't change the Mav game plan.

With the likelihood of a sprint finish high and four sprinters among their eight (Pixie, Walnut, ProMelon and Diggler), the aim was for the other four to take turns in pinging off the front. This it was assumed would have the dual purpose of forcing the other contenders to constantly chase, while also providing for the chance that one of the attacks would stick.

Pigeon, TimTam, //r and Rambu certainly did animate proceedings throughout the 90-minute contest, but the sprinters didn't just sit in, all four being aggressive at the front during different periods of the race.

After four laps, the bell sounded signalling the Sprint Prime and Pixie shot forward, forcing a small group of four. While never out of sight of the peloton, the quartet managed to maintain a gap for the whole lap and the young American duly delivered, holding off former Mav Bear of the Joyriders on the line for the first honours of the race. 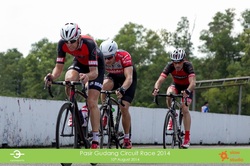 Who else but Pigeon in another break, this time with Rambu and Bear
There was also a KOM Prime but with the bell atop the "hill" suffering from a structural failure, it was unclear to most of the field when the contest for that was.

The Mavs stuck to their plan admirably and launched attack after attack. TimTam and Pigeon were at their animated best, while Rambu found himself clear for the best part of two laps before being chased down by Ayub Kathurima of the Kenyan Riders, who incidentally missed the start of the race ...

More attacks followed but none ultimately succeeded and so a 20-strong bunch remained together when the two-laps-to-go signal. Crucially all eight Mavs were still present.

While the pace had been high for the previous 15 laps, it kicked up another gear for the finale with all the big teams seemingly sending off single riders in search of the glory. This strung out the peloton for the first time in the race and gaps began to appear on the penultimate hill before the chicane. Through the final bend and Walnut went for the glory but Ekiru came storming through to take the win. The man from the Sunshine Coast by way of Oman held on for second place from another Mav, young Pixie, with the ProMelon having to settle for fourth on what was his last race as a Singapore-based Mav.

With three out of the first four the Cat 1 Mavs took the team title again, going four for four on that count so far this year in the Cycosports Series. The team was:  Walnut, Pixie, Chris "ProMelon" Nyonyintono", Nick "Pigeon" Swallow", Noel "Diggler" Teh, Bastian "//er" Dohling", Ben "TimTam Arnott and Alan "Rambu" Grant.

The finale of the 2014 Cycosports Series stays in Malaysia for the Desaru Cup, a rolling 170km course on the quiet, hot and windy roads of eastern Johore state. With the Mavs leading both the series-long team rankings and topping the individual age group tables, there's a lot a stake on the October 11 race day, for what's sure to be another great day out. 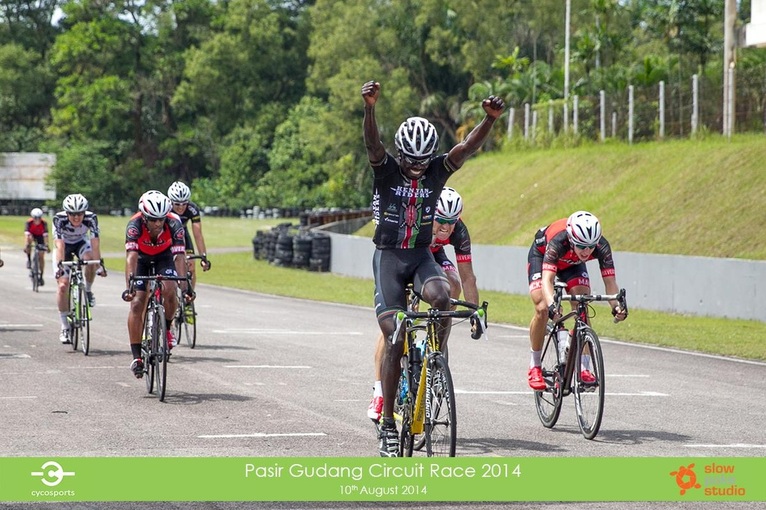 Ekiru revels in his win
Proudly powered by Weebly