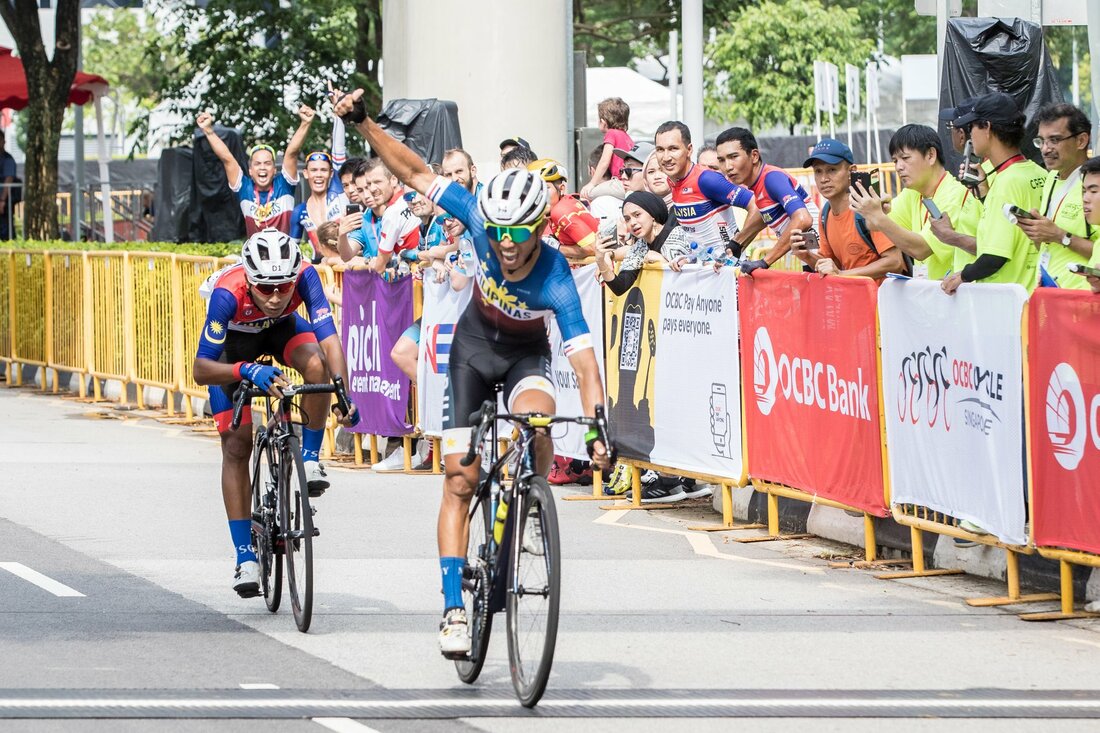 That winning feeling!
May 14, 2019
The unique and exciting OCBC Cycle Speedway Championships returned to the Singapore Sports Hub last Saturday and after six hours of thrilling action the national team of the Philippines were crowned Southeast Asia champions, while the Specialized Roval Mavericks retained their title as top local club.

Significant this year was the presence for the first time of not just one all-female squad, but two; the Anza Women’s Cycling Team and the Fahrenheit Performance Development Team were the pioneers. Perhaps a bit more publicity and/or outreach could have brought more female teams to the competition, which might have made a stand-alone women’s championship feasible, but as it was the ladies had to race against the men. 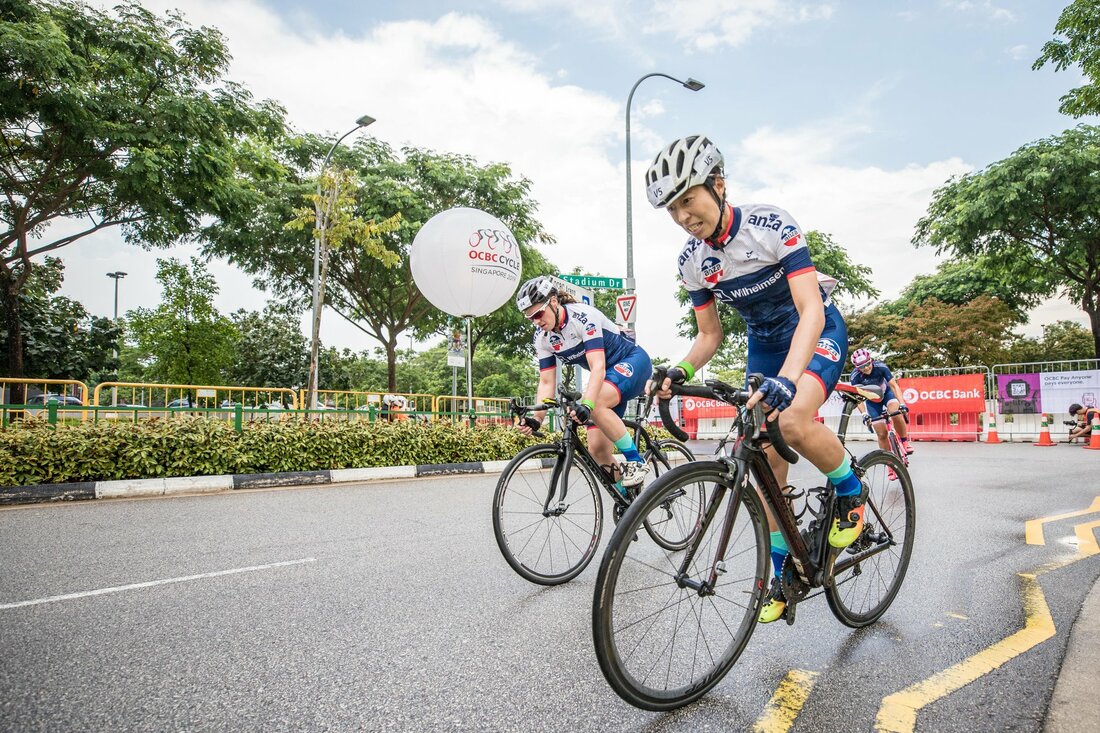 The women of Anza Cycling and Fahrenheit Performance Development Team competed hard
What makes the OCBC Cycle Speedway Championships unique is that it combines criterium racing with a team relay, in a concept originally conceived by organisers Pich Event Management. Each of the rounds of racing on Saturday took place over 10 laps of a hotdog circuit skirting the northern edge of the Singapore National Stadium. The roughly 1.2km loop comprised of two fast straights connected by a sweeping roundabout turn at the far end of the circuit, and a much tighter U-turn at the near side.

The clubs/countries fielded four riders in each heat, with the first five laps raced by two riders before they handed over to the second pair for the final five laps. The results in all the rounds of racing (qualifying, semi-finals and finals) were derived from the cumulative time for the third and fourth riders across the line for each team. This was a change from all four previous editions of the OCBC Cycle Club Championships, where placings rather than times were sued to settle the result. This change proved to be significant at the end of the day.

The over-complicated handovers had been messy affairs in previous years, which had resulted in too many contests being decided by time penalties after riders messed up in the transition zone. This year the handover process was simplified and there were no infractions. Great job Pich and the Singapore Cycling Federation for listening to the feedback. 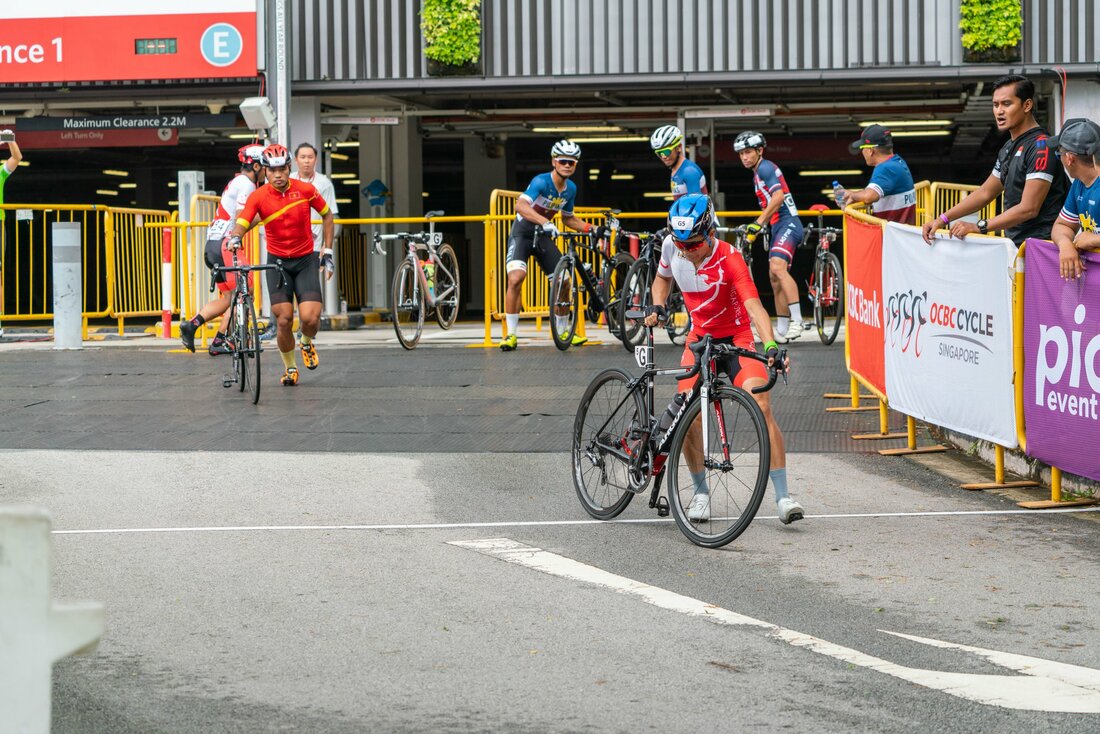 The handover process this year was almost flawless
The clubs opened the main action on Saturday with the first of three qualifying heats at 9:30am (a six-team OCBC Cycle Speedway Corporate Championships had acted as a warm-up earlier; this was won by GlaxoSmithKline). The first two teams in each heat would move forward to the semi-finals, with the two best “fastest chasers” across all three heats also making it to the penultimate round. CyclingTraining.cc and Specialized Roval Mavericks B were first and second in heat 1, Allied World and Treknology2 and Specialized Roval Mavericks moved forward from a storm-affected heat 2, and after a lengthy rain delay, Matador Racing and Anza Cycling Team A took the two top spots in heat 3.

That last heat also featured both women’s teams, and while they perhaps predictably finished fourth and fifth, they put on a great show and blazed the trail magnificently for an official women’s championship next year. The Fahrenheit Performance Development Team took the unofficial women's crown for 2019. The two “fastest chasers” taking up the last two spots in the semi-finals were the Swiss Club Riders and the Greyhounds; however, the Swiss Club Riders had to withdraw after the wife of one of their racers went into labour! A valid excuse. Integrated Riding were the beneficiaries and so lined up for the semis. 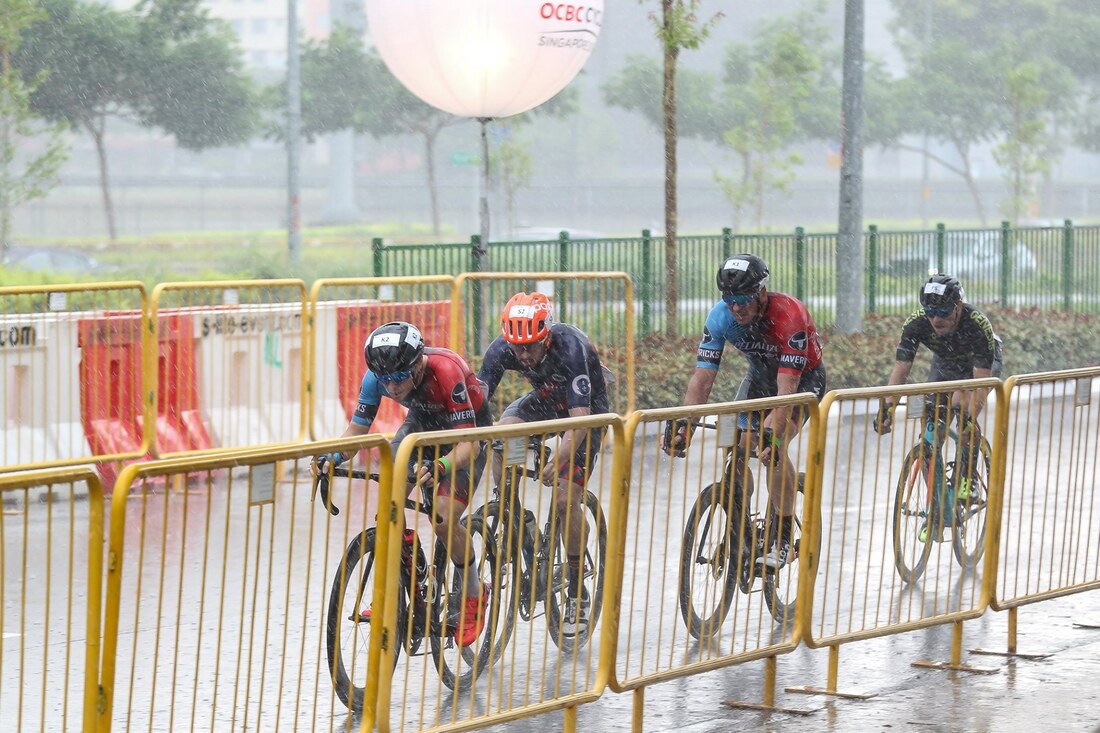 What's a little rain when there's a bike race to be won?
The national teams took to the circuit for their qualifying heats next. Myanmar, Brunei, Malaysia, Thailand and Cambodia competed in heat 1, with Malaysia and Thailand taking the automatic slots for the semi-final. In heat 2, all eyes were on Singapore as they faced the Philippines, Laos and Vietnam. Alas, Singapore got in wrong once again in the OCBC Cycle Speedway Championships, crashing out after finishing a narrow third to the Philippines and Thailand. There was one “fastest chaser” slot for the semi-final on offer, but heat 1 was significantly faster and so the third-placed team in that race, Cambodia, moved forward.

It’s not cruel to say that all four teams in heat 2 got it wrong. By going second they already knew the finishing time of the heat 1 and so a fast race was in all of their interests as three of the four would probably go through. However, they collectively opted for a slow, tactical, cagey affair, putting all their eggs in the legs of the sprinters, and Singapore ended up being knocked out because of that.

It was then back to the clubs for the semi-finals, and in the first of those races, Matador Racing and CyclingTraining.CC took the two automatic spots, with Integrated Riding having to wait and see if their third place would be fast enough to earn the single “fastest chaser” spot on offer. 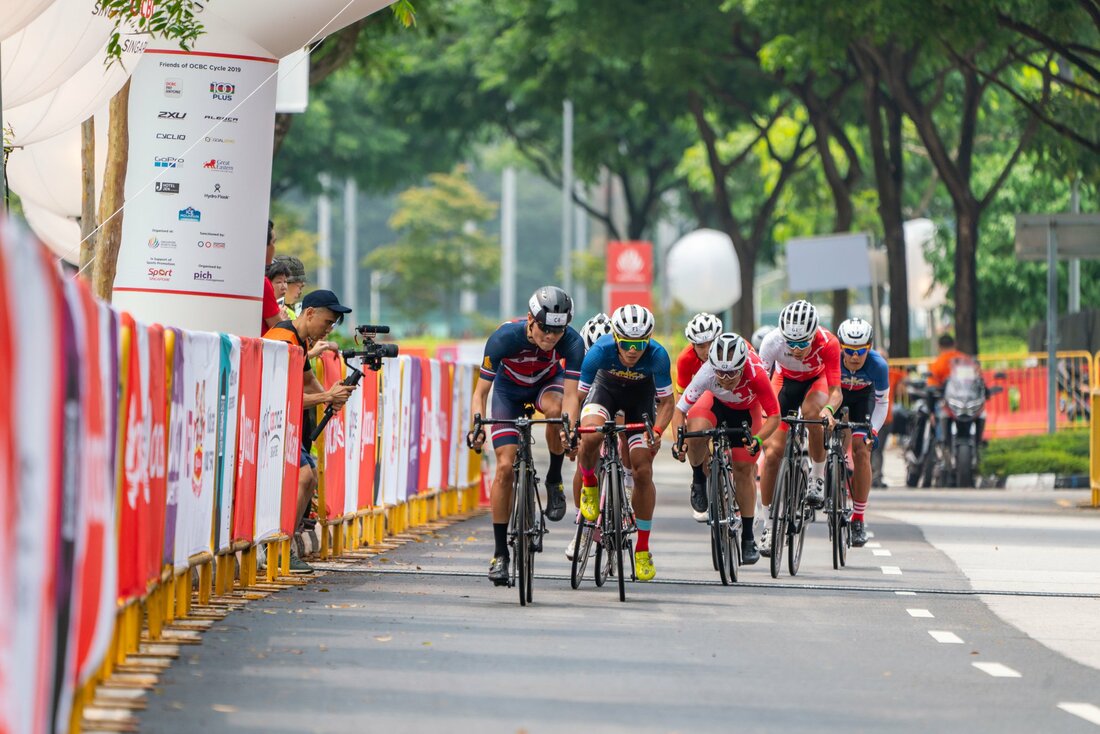 Team Singapore in action
​It turns out it was as semi-final 2 was a bit more tactical as the Specialized Roval Mavericks had their B team push ahead solo, while the A team opted not to chase, relying on their sprinters to do the job for them. This perhaps risky strategy worked out for the Mavericks as they took a comfortable one-two.

The Southeast Asia semi-final was a single round and only one team was set to be chopped before the final. The short straw went to Cambodia, and so the finalists in the battle to see who would be top regional nation were Malaysia, Thailand, Vietnam and the Philippines.

First up, though was the Club Championship final and like in just about all the rounds of action the amateurs put up a more exciting and much faster show than the national riders eventually did. The early skirmishes saw the first Specialized Roval Mavericks B pair push the pace as they attempted to get a break way again. This didn’t work out, though, as four teams came to the handover together, but that brutal opening did have the effect of seeing the other Mavericks team cut off and out of contention. 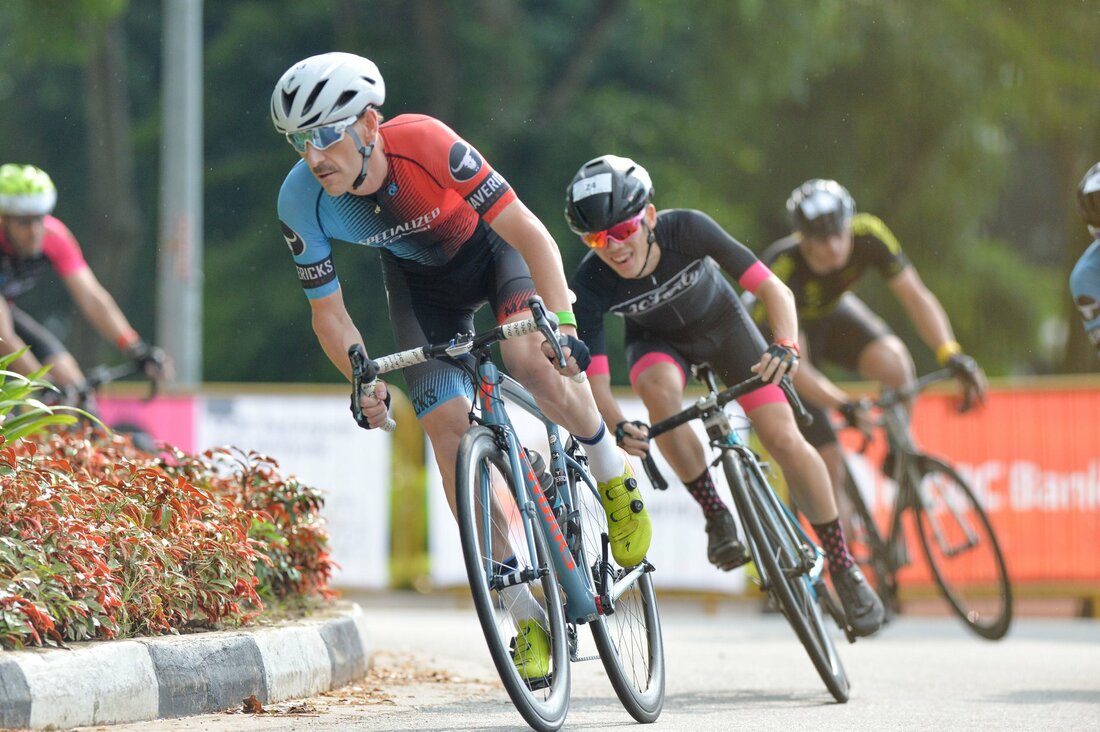 The roundabout on the circuit brought about lots of leaning in
The battle for glory was soon down to three teams early in the final five-lap stint as Integrated Riding were next to be spat out the back, leaving Mavericks B, the Matadors and CyclingTraining.cc. The six riders were still together at the bell, and just before the second last turn the Matadors made their move, with Romain Barbier launching long. The big Andorran opened up a gap, but the other two teams chased hard and caught him just before the final turn, which proved the cue for the other Matador Thomas Thrall to make his move. The young Canadian came out of the roundabout with some daylight and looked set to claim line honours, but Rick Dumpleton of the Mavericks had other ideas and a perfectly timed surge saw him take the chequered flag by a tire width.

There was a bit of a gap to the CyclingTraining.cc duo of Todd Sinclair and Jerome Teo in third and fourth, and in the crucial sprint for fifth place, Trent Iliffe of the Mavericks overhauled Barbier. But with the cumulative time of the final pairs of riders counting, none of the teams were overtly claiming victory immediately post-race, and the organisers made them sweat for 90 minutes before announcing the Specialized team as the champions. But it was close, as their winning time of 17 minutes, 49.390 seconds was just five hundredths of a second faster than the Matadors, with CyclingTraining.cc four-tenths back in third.

The timing rule change was cruel on CyclingTraining.cc as under the previous format they would have been the winners, but instead it was the Specialized Roval Mavericks B team that took the title and the cheque for $800.

“Teamwork is a big part of any cycling race but especially so at the OCBC Speedway event. We got our team selection and team tactics spot on today,” Mavericks team captain Arnott said post-race. “With such a small winning margin it’s difficult to pinpoint one factor. I think the training and equipment, courtesy of Specialized, gave us the edge, and the strong desire of our riders to get across the line first!” 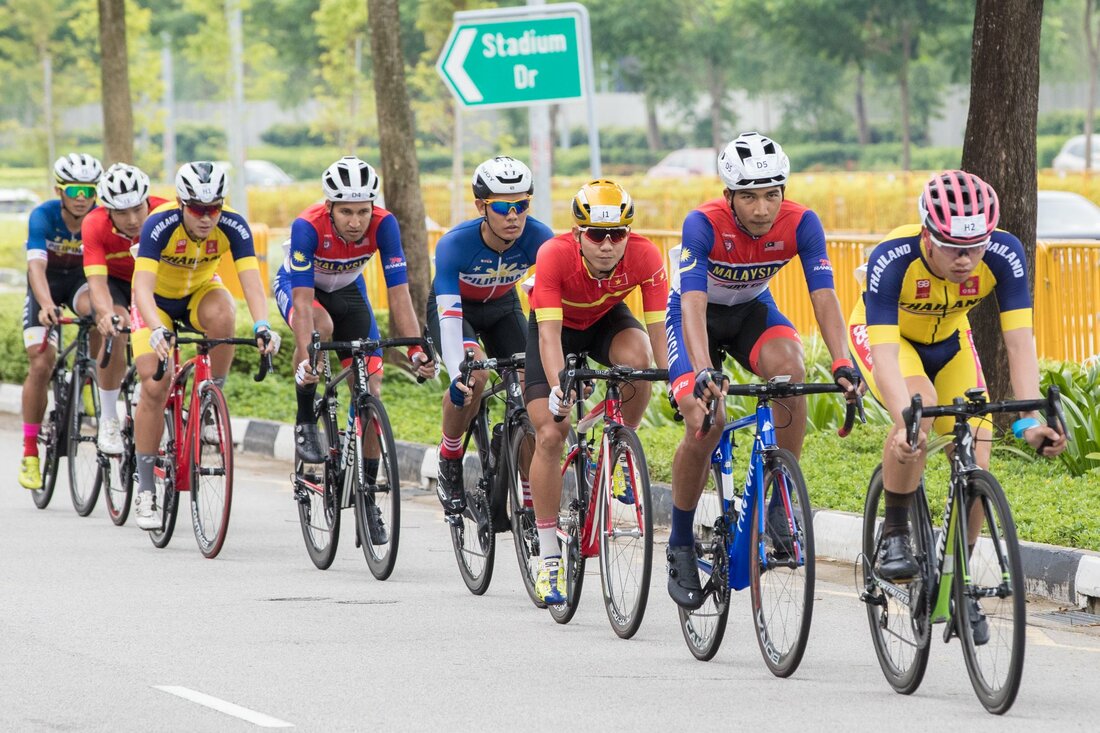 The calm before the storm in the Southeast Asia Championship final
The action ended with the OCBC Cycle Speedway Southeast Asia Championship final. The first five laps were marked by a pattern of groups consisting of single riders from each nation getting away only for everything to slow down and come together again. So the handover saw all four teams still together and everything to play for. With two of the final five laps to go, the peloton split into two bunches of four, with each nation represented in both groups. The front group stayed away, with the Philippines rider taking the sprint as he overhauled Vietnam and Thailand just before the line. But all four teams still had a chance of winning the title depending on the outcome of the sprint for fifth place.

This turned into a cagey affair, with no rider wanting to take the initial initiative. It finally exploded into action with about 500 metres to go as the mini-pack approached the roundabout for the final time. All four teams went into the turn with a chance, but only three came out, after the Thai rider crashed. The Filipino and Malaysian and racers pulled away from the Vietnamese man in the straight, and it was the Filipino, Jan Paul Morales, who crossed the line in fifth, clinching the OCBC Cycle Speedway Southeast Asia Championship title and the $6,000 cheque that went with it. Interestingly, the national team riders and their game of strategic slow, resulted in the Southeast Asia winning time being some 90 seconds off the mark set in the Club Championship final.
Post-race the Philippines team captain John Mier was understandably excited about what he said was an unexpected triumph.

“We feel very happy because we did our best and achieved our goal of being the champions. We didn't expect the win because the other teams also had very strong cyclists,” Mier told the Straits Times. "Our strategy this year was to keep our two fastest riders as the third and fourth riders and we had one man in the front and the sprinter in the back."

The 2019 OCBC Cycle Speedway Championships was another exciting event and the event is undoubtedly one of the highlights on the local road-racing calendar. And hopefully it can get even better next year by expanding the race card so that the women riders can get their own race.