March 27, 2017
The URA CFS Share the Road Criterium returned to the streets of downtown Singapore yesterday but with a significant difference from the first two editions of this new monthly event; the racers tearing up and down the CBD circuit were competing in the 2017 Singapore Para Cycling National Championships. Since January of this year, the Urban Renewal Authority (URA), the Singapore Cycling Federation (SCF) and cycling events outfit Cycosports have collaborated to stage criterium racing as a preamble to the monthly Car Free Sunday (CFS) initiative.

As its name implies, Car Free Sunday banishes motorised vehicles from the streets of the central business district and turns them over to cyclists, rollerbladers, skateboarders, runners, walkers and anybody else who simply wants to enjoy hanging around Singapore’s historic civic zone in a safe setting. While the main program of Car Free Sunday activities flags off at 8am, the criterium element begins at 6am, when two 40-minute races are squeezed into a two-hour window.

Various men’s contests plus a juniors’ and a women’s race graced the January and February editions, but Singapore’s para-cyclists (and guest riders from Malaysia) got their moment in the spotlight yesterday. The occasion was hugely significant as it marked the first time ever that a dedicated para-cycling race took place on closed roads in Singapore; although para-cycling categories have sometimes been included at mainstream cycling events in the past. Para-cycling is split into four disciplines: Cycling, Tandem, Hand-cycling and Tri-cycling. While tri-cycling has yet to take off in Singapore, the other three disciplines all had their own races yesterday.

The landmark event was graced with favourable weather, which allowed for a safe course for the competitors, and ease of access and comfortable viewing of the racing action for the many supporters and spectators. The racecourse was the same 1.7km circuit used for the previous two URA-CFS Share the Road crits, featuring two long straights in the shape of Cecil Street and Robinson Road, with those concrete canyons connected by two fairly technical but wide U-turns. 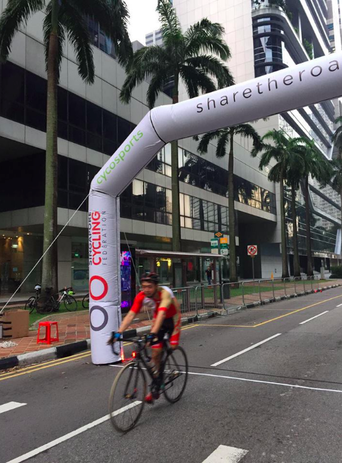 The Hand-cyclists featured in the first contest, which started at 6am. Aboard state-of-the-art and in some cases blinged-out recumbent bicycles, the seven competitors in this category used nothing but arm and core power to move around the course with great speed and skill. The second race at 6:45am saw the Tandem and Cycling events, which were on course at the same time but not competing against each other. The tandem discipline pairs a sighted cyclist up front in the pilot’s seat, with a visually impaired rider on back known as the stoker.

The speed and cornering abilities displayed by the four Malaysian pairs who made up the entire tandem field yesterday was very impressive. The lead trio of male teams rode most of the race in a tight paceline until the ringing of the bell for the final lap, which had the effect of upping the ante and saw the contest end in a thrilling sprint finish.

For the cycling events, the seven racers were aboard regular road bikes, but they had a range of disabilities; some had cerebral palsy, while others were missing limbs. For example, one of the riders yesterday had a prosthetic leg clipped into his right pedal, while another’s impairment saw him power his bike with just the one leg clipped in.

In races such as yesterday’s, where the para-cyclists from different categories all rode together, to determine results an official “correcting factor” takes into account gender and different impairment classifications in addition to the raw finishing time. This correcting factor was displayed in the results yesterday where the order over the finish line didn’t always reflect the final standings.

The riders from the much more experienced Malaysian team won all of yesterday’s races. In the Hand-cycling race, Lim Tao Keong took the honours, but in second place and being crowned Singapore National Champion, was Naren Lee Sankar, who won the title despite finishing just behind Noor Iskandaria Mohd Dena. Similarly, in the road-bike Cycling race, Malaysia’s Mohamad Yusof Hafizi Shaharuddin was declared the winner even though he finished fourth out of four in the sprint finish. In the same race, Tan Hun Boon won the Singapore National Championship.
In the Tandem race, the pair of Muhammad Afiq Afify Rizan and Muhammad Khairul Adha Rasol crossed the line first and took the win. Interestingly, though, after the “correcting factor”, the sole female duo of Nur Syafiqah Shamsuddin Noraidillina Adilla J. Sam saw their raw time deficit cut from over 4 minutes to just 17 seconds, which explains why that pair kept riding hard till the end.

For full results of the Singapore Para Cycling Championships, visit the results page at www.cycosports.com.

With the racing complete, many of the competitors and a larger cohort of the local para-cycling community made their way to the Padang for the 8am flag-off of the wider Car Free Sunday activities.

Hopefully yesterday’s event will be a springboard for Singapore’s para-cyclists to get more dedicated races. The president and head coach of the Para Cycling Federation of Singapore (PCFS), Christian Stauffer, certainly hopes so. In the after-glow of yesterday’s event, Stauffer took the time to explain what the 2017 Singapore Para Cycling Championships means for the community as well as some background to the sport. 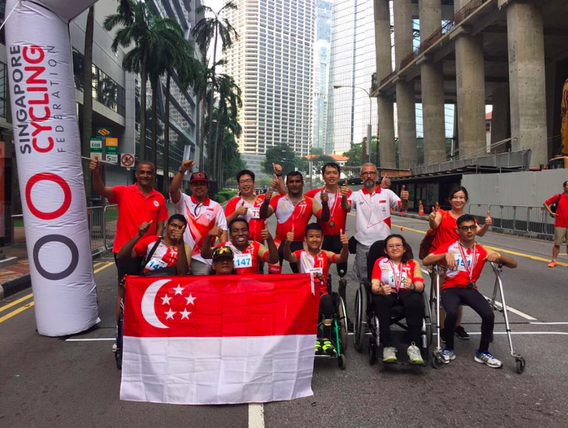 Christian Stauffer (in white shirt, right) with the happy Singapore para-cyclists post-race
How significant for the local para-cycling community was having the URA Car Free Sunday crit course to race on yesterday?
Christian Stauffer: It was very, very significant as it was the first time ever we have a dedicated para-cycling race in Singapore and the venue and organisation were so great. We have in the past at the national level participated in some of the existing cycling events but we’ve never had our own proper dedicated race and with some participants from overseas. It is also the first time that we were able to display three out of four of the para-cycling disciplines: cycling, tandem and hand-cycling … we do not have any tri-cycling in Southeast Asia yet!

How did you think the morning went? A success?
CS: It went very smoothly, we had the chance to work with Cycosports as race organisers and they were able to put a very good race infrastructure in place. The race venue is just magic and URA support was key. The participation of the Singapore Cycling Federation commissaires and management plus the bunch of marshals and volunteers were also vital. And let’s not forget the hard work of the Singapore Disability Sport Council to coordinate all the efforts! So while we can and will do better in the future, I believe it was a true success to manage to bring all these groups around the table and get these guys and girls to race together in the best harmony of sport. Our entire our team of athletes and officials at PCFS are now even more motivated in the lead up to the 2017 ASEAN Para Games in KL in September.

How does the rating system work when you have different classifications of para-cyclists racing each other?
CS: This is a key aspect of para-sports. First of all there is what we call the Eligibility Critereria, which defines the minimum impairment level and the conditions that are actually considered for a particular activity. For example, tandem stokers can only be from the visually impaired community and UCI/IPC (the Union Cycliste International and the International Paralympic Committee, the governing bodies for para-cycling) have a very clear definition of what is the visual-impairment minimum level. So an amputee will not be eligible to ride as stoker on a tandem.

Secondly, within the same activity there is a sub-classification depending on the functional impairment of the athletes. So for example, the hand-cyclists will be categorised from H1 to H5, H1 being the most functionally impaired and H5 the least. Before any race and in particular international races, athletes and their equipment are reviewed by a panel of three classifiers (one technical and two medical) and given a provisional classification and submitted to further observations (including during racing). After a few key races their classification will be confirmed and only subject to review in case of improvement or regression. This is key to ensure fairness to the participants. Therefore, in a combined event like we had yesterday, which had male/female and different classification, there is an UCI official correcting factor that is applied to the raw time. This correction factor can be key to the final results.

Describe some of the additional hurdles that the para-cyclists had to face in getting ready to race yesterday?
CS: Para-sports, and para-cycling is no exception, require a more challenging logistic when it comes to bringing athletes together. We have the chance to bring a very large spectrum of functional impairments together and it can be a challenge. We also always put safety as number one and therefore our training rides need additional riders to guarantee the security of some of athletes on the busy Singapore roads. Sometimes for some of our athletes it can be a challenge to commute to training, it can take one and a half hours to reach the training venue, then two hours to train and one and a half hours to go back home ... but overall we manage :-) High-performance training is still at an infant age in para-cycling so we adapt our training methods from the cycling world with more or less success. 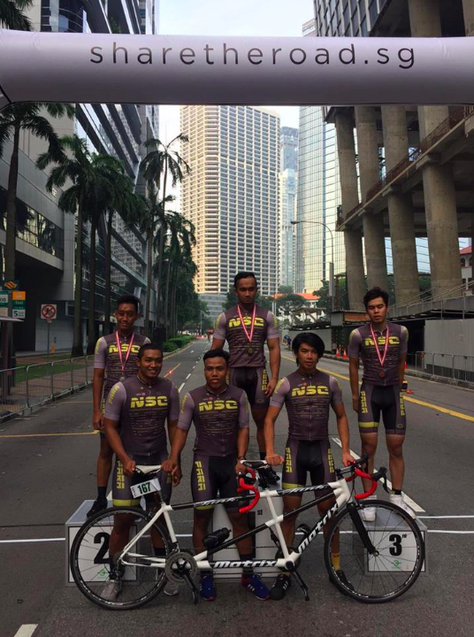 The all-conquering and much more experienced Malaysian team
Where do the guys and girls normally train?
CS: We have a long-term collaboration with ITE College East where we store all our equipment, train and start our outside rides.

How many para-cyclists do you have regularly training in Singapore?
CS: We split our time between the recreational/juniors and development/competition team. We have about 30-35 juniors in the recreational team and about 15 in the development/competition team. It probably makes us one of the more sizable para-sports in Singapore.

How do you hope to build on the success of yesterday’s race?
CS: First, I think our ambition is to make it an annual event so that we can invite more of the neighbouring countries and make it gradually a key para-cycling race in Asia. With the proper infrastructure and support, we will surely be able to invite some of the other Asian countries such as Japan, South Korea and China who are among the best countries in the world. We are very lucky to have a friendly relationship with most of the countries including beyond Asia.

We have also the chance to have a strong bond with Team Malaysia, which is leading the charge in Southeast Asia and now getting noticed on the world map; they got a bronze medal in tandem at the last World Cup. Second, we want to display more the ability of our cyclists, we do not think in impairments terms but more in that they possess a different ability. I believe that the show yesterday was not much different than any cycling race we have in Singapore. Lastly, we want to bring the cycling community together!

So how can the wider Singapore cycling community help?
CS: I think it is already on the way. We have a very close relationship with the Singapore Cycling Federation at all levels, we are starting to be known in the cycling clubs too, and most of our regular marshals are part of the local cycling community and clubs. So let's bring that to the next stage!
Proudly powered by Weebly