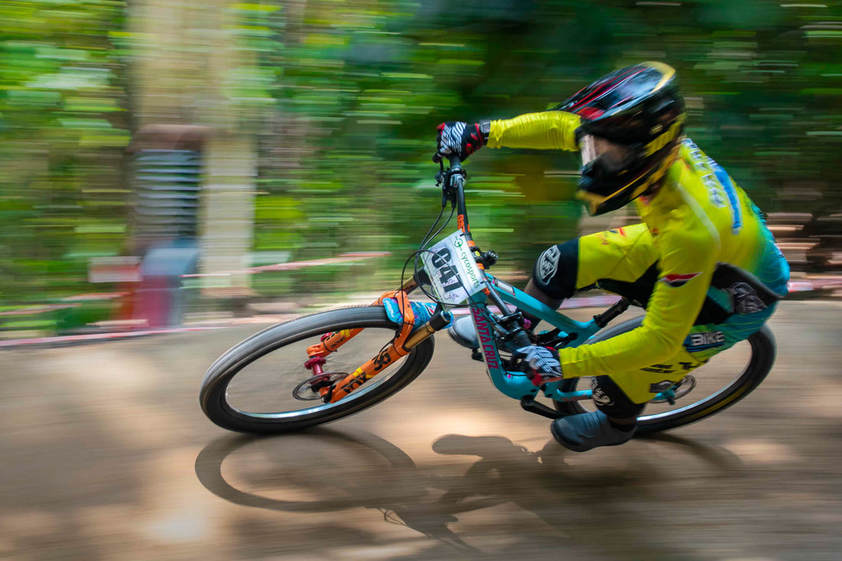 With its well-established Jungle Cross series, cycling events outfit Cycosports has provided Singapore’s mountain bikers with a steady stream of competitive action over the past few years, but those races at the Centaurs Trail in Turf City have been overwhelmingly geared towards the cross-country fraternity.

However, that changed last Saturday when Cycosports staged the inaugural Kent Ridge Carnival, which saw downhill racing take centre stage. The event at the Kent Ridge Park MTB Trail was positioned as a test event for the Downhill National Championships in July, and local gravity-loving daredevils turned up in numbers for a rare chance to test the course under competition conditions.

Four contests were on the downhill race card at Kent Ridge; Men’s Open, U23 and Masters, and Women’s Open. The day started early with the downhill course opened at 7:30am for 90 minutes of familiarisation, before each racer got two competitive cracks at the course; a seeding run followed by the main event. 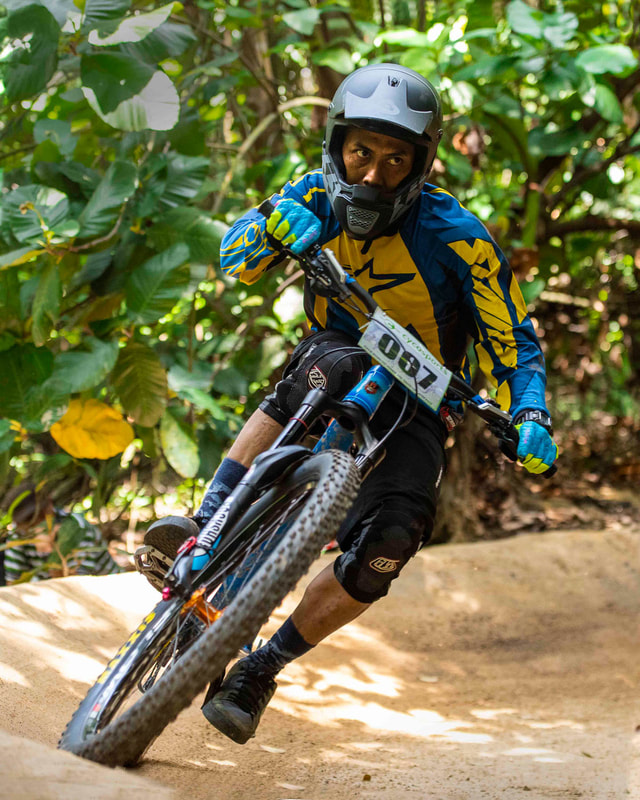 Extreme focus from No.7 Riduan Yassin who finished 7th in the Masters downhill
The race headquarters were set up at the first car park at the top of Vigilante Drive. Anybody who has driven, ridden or even walked up the tarmac on Vigilante knows how severely steep the gradient of the slope is, and that’s what makes Kent Ridge Park the perfect location for downhill racing. The course featured a short section of trail running parallel to the road where the riders could pedal up some initial speed, then plunged straight down into the jungle, where a series of twists and turns tested both nerve and technical ability, before coming to a screeching stop just before the bush meets South Buono Vista Road.

For safety reasons no spectators were allowed in the main guts of the course, but even the pre-plunge section provided thrills for the big crowd, especially as the racers swerved to avoid a tree slap bang in the middle of the trail (it was thankfully well adorned in red and white tape) and some low-hanging branches just before entry into the steep stuff.

Once the seeding runs were completed, the racers were then set off in ranking order, slowest to fastest. While those qualifying runs provided a pretty good indication of form, they weren’t always decisive as the results from the finals proved. 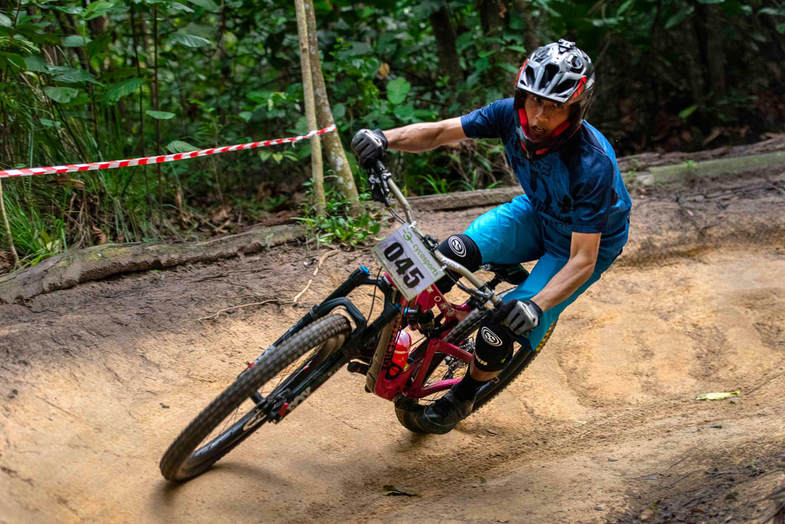 Froylan Encillo missed out on the Men's Open podium by just over 1 second
In the Men’s Open, Irvin Tan put in the fastest seeded run of 1 minute, 22.9 seconds, with Pamungkas following some 0.67 of a second later, but the roles were reversed in the final as Pamungkas went a stunning 4.2 seconds faster to take the title with a time of 1:19.37. Tan also went faster in the final, but he had to settle for the silver medal 1.7 seconds behind the winner. Daryl Ong took the final step on the podium but the quality of the leading two riders was shown by the 5+ seconds gap between Tan and Ong.

Hajiro Ijo took the Men’s Master’s crown, going faster by 1.85 seconds on his leading qualifying run to record a winning time of 1:28.6. Raphael Jaggy was only fourth after the seeding, but he improved by 3.5 seconds to take the runner’s-up spot in the final, just 0.44 of a second behind the winner. Arnold Lacorte took bronze.

The Men’s U23 saw a huge turnaround from seeding, as Nicholas Rankine improved by over 11 seconds to record 1:24.71 in the final. This gave him the victory over the leading qualifier Syazwan Mohammad, who finished 1.35 seconds back. Hsin Chih Peng finished third on 1:26:86, going a staggering 21 seconds faster than in qualifying.

Sylvia Tan took the Women’s Open title with a time of 1:44.58 but unfortunately no other female cyclists signed up to race the Kent Ridge Carnival 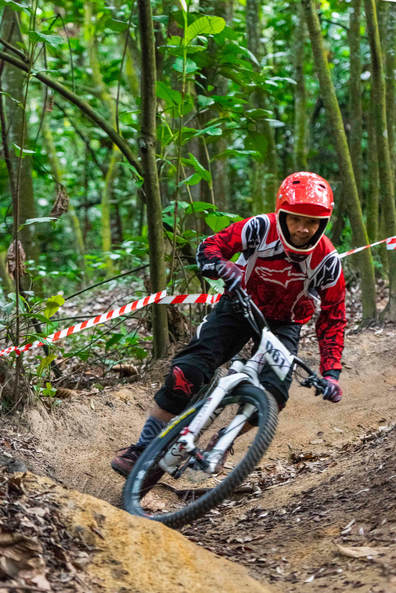 Walton Seah scored at top 10 in the Downhill Men's Open
While the carnival’s main purpose was as a downhill test event, cross-country racers also got a chance to compete on Saturday over the full Kent Ridge Park trail. Men’s Open, Masters and Super Masters, and Women’s Open events were on the program, with all four races on course at the same time, but separated at the start by 1-minute intervals.

The Kent Ridge course is much more technical in nature than the Jungle Cross circuit and also physically more demanding, with the viciously steep climb up the grass running adjacent to Vigilante Drive especially punishing.

The Men’s Open racers were set five laps of the 1.8km circuit and it was all familiar names at the front of the action. Riyadh Hakim and his mentor Junaidi Hashim (both Team Awano Treknology) had already pushed clear of the rest by the end of the first lap, but while Junaidi faded somewhat as the race progressed, Riyadh got faster and put on a masterly display of mountain biking to take the title. His winning time of 39:05 was over 2 minutes faster than the runner-up Anthony Brown (Cannasia Absolute Black Racing). Arfan Faisal (Team Awano Treknology) took the final step on the podium.

Nick Liang (Cannasia Absolute Black Racing) enjoyed a ding-dong battle with Mohamad Faizal (Twenty9er Racing Team) for the first three laps of the Men’s Masters race, but then put in a stunning last lap to break clear and take the title with a time of 37:13. Faizal had to settle for being runner-up some 47 seconds behind, with teammate Mohamad Khaniz joining him on the podium in third.

The Super Masters crown went to John Van Wyhe, who impressively went faster on each of his four laps to take a wire-to-wire victory in a time of 36:52. The runner-up Massimo Nanni (Cannasia Absolute Black Racing) finished 75 seconds back, with Alvin Lim (Team Entro Cycles) a further 60 seconds behind in third.

Like in the downhill racing, only one woman turned up to race, but the winner Tsalina Phang still put in a competitive effort to cover her four laps of the tough circuit in 43:56.

Downhill racing returns to Kent Ridge on July 21 for the Singapore National Championships. For full results of the Kent Ridge Carnival, click on this link.

Jungle Cross
Kent Ridge Carnival done, the Cycosports team then performed a quick turnaround to get their equipment ready and set up for the second race on the MTB double header, round two of the five-date 2018 Jungle Cross series at Turf City on Sunday morning.

A deluge on Saturday afternoon that continued into the night had threatened to turn what was being billed as a super-fast, dry course into the usual Jungle Cross mud bath, but while the course was stickier in places, the rains actually gave the trails a bit of bite and improved traction. In short, conditions were great for cross-country racing. A healthy field of 80+ riders across the cross-country, all-mountain and cyclocross disciplines turned up to race and an exciting morning of action unfolded. 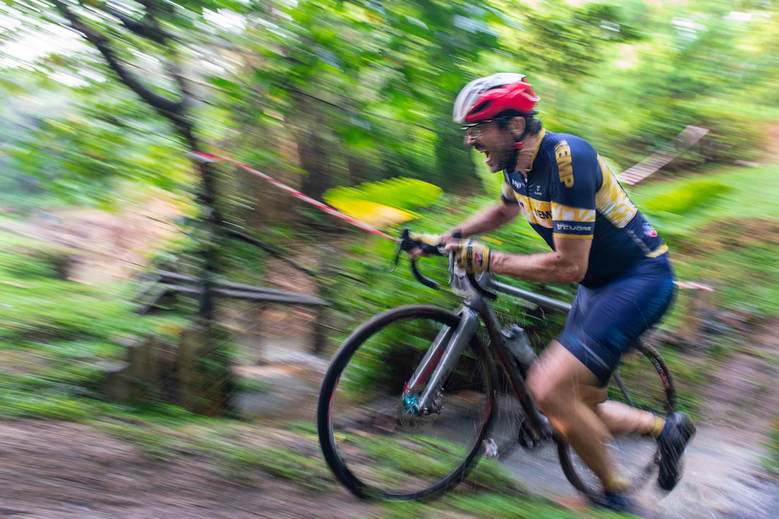 Pierre-Alain Scherwey feeling the pain during the cyclocross race
The Cyclocross Open race started proceedings, and saw a newcomer to CX, the elite roadie Pierre-Alain Scherwey (Allied World Kemp Technologies), storm into the lead with a blistering first lap. The rookie couldn’t maintain the pace, though, and it was his teammate Mike Koreneff who mastered the conditions best to take the victory. He covered the four laps of the “easier” of the two Centaurs Trail circuits in a time of 41:24, which gave him a comfortable winning margin of 1:40 over the runner-up Rob Lamb (Stinner Bicycle Club). Scherwey took the final step on the podium.

Racing at the same time on the less-technical course were the mountain bikers in the Junior Bs (for 13-16 year olds), and the Men’s and Women’s Sports categories, with all three groups also faced with four laps of the 2km circuit.

The Men’s Sports contest saw a close-fought battle over the opening two laps between Rick Oberoi and Sheikh Ahmad Basharahil Salim (Twenty9er Racing Team), before Oberoi pulled away during Lap 3 and went on to take the win with a time of 39:56. Salim easily held on for the runner’s-up spot, with Joseph Siew (Roadbrothers) in third. 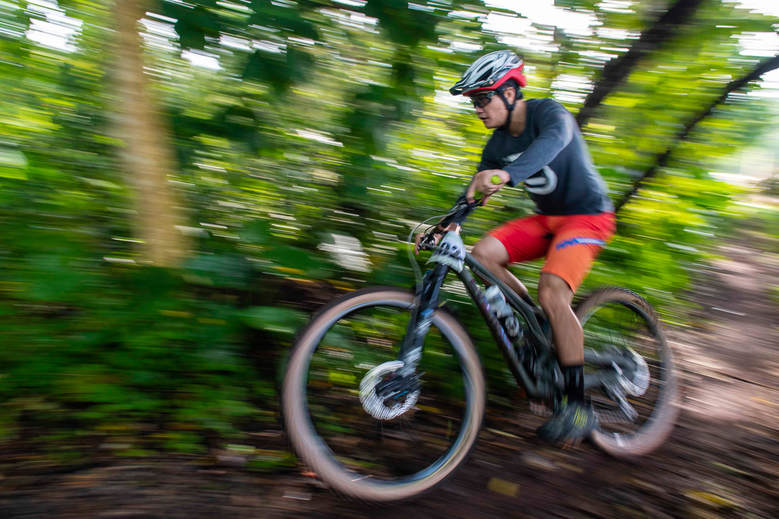 The Juniors B title went to Syarf Haqqani Teguh Saiful Nizam Helmi (Northern Riders) who led wire-to-wire and took the chequered flag with a split of 49:13. Jared Morgan finished second some 2 minutes back, but he was nearly run down by an amazing battle for third spot between Ryan Mikael Mohd Amin (Twenty9er Racing Team) and Abdul Haziq Johari (Team Harding). The former claimed the final spot on the podium by just 0.06 of a second.

The All Mountain riders were next up, and they rode a modified version of the CX/Sports course that included a few vertical challenges to suit their longer-travel machines.

Ian Kempl emerged as a clear winner over the three-lap race, crossing the line with a time of 38:53. Aza Supardin was second a minute back, with Rohaizat Md Hashim taking third place. 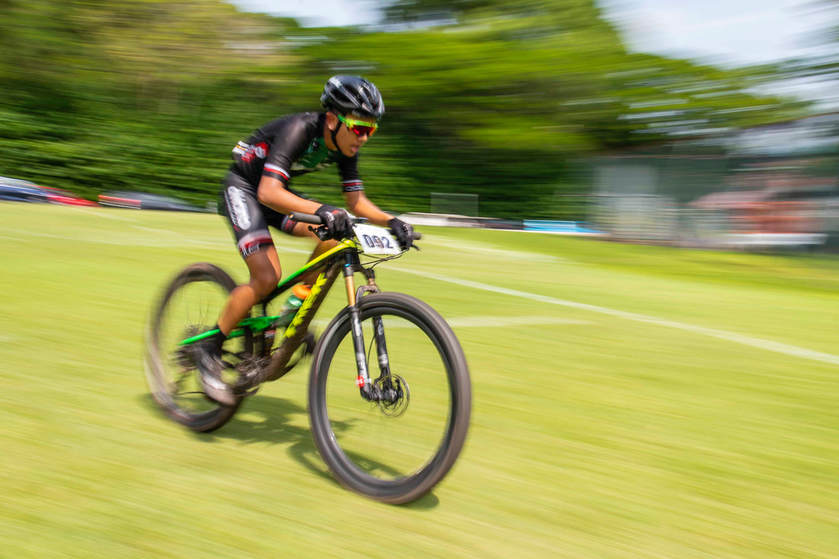 Men's Open double cross-country champ Riyadh Hakim
It was 10am before the third and final group of riders got their turn to race, included the elite Men’s Open. The big guns faced five laps of the longer (3.8km) and more technical “pro” circuit, while the Juniors A (17-18), Masters (35-44) and Super Masters (45+) all went round four times.

Riyadh showed no sign of fatigue from his win at Kent Ridge on Saturday and put on another dominating performance on his way to a famous weekend double. Awano Trek teammate Junaidi hung with the youngster for the first lap, but Riyadh was steadily lapping about 20 seconds faster for the remaining four rounds and he took the flag some 90 seconds ahead of Junaidi in a time of 1:08:56. Third place went to Brown of Cannasia, scoring his second elite podium of the weekend.

The Juniors A title went to Faisal of Awano Trek. The teenager had finished third in the Men’s Open at Kent Ridge as no juniors races were on the Saturday program. His Jungle Cross winning time of 59:14 was the fastest by some margin across the categories that raced four laps of the Pro circuit.

By comparison, Frederic Schaff (Swiss Club MTB Riders) took the Super Masters crown with a time of 1:01:14. Schaff put in a dominating performance to win by over 4 minutes from the runner-up Lim (Team Entro Cycles), another man to score a weekend podium double. Dan Smith (Matador Racing) rounded out the podium. 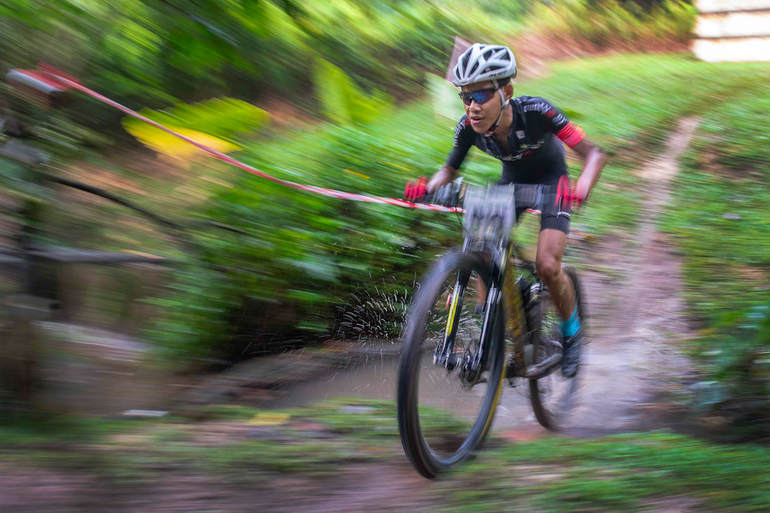 Masters champ Mohamad Khaniz having fun at Turf City
The Masters contest saw more prominent Kent Ridge racers battle it out again at Jungle Cross, with the Saturday third-place rider Khaniz turning the tables on his Twenty9er Racing Team teammate Faisal to take the win. But Khaniz needed a super-strong last lap to catch then pass Faisal to claim victory by just 5 seconds. Kent Ridge winner Liang of Cannasia put in another storming final lap but he left it too late this time, finished third a further 5 seconds behind Khaniz.

In the Women’s Open, Phang of AttitudeBikes had some competition this time, but she rode strongly to take the weekend double from the runner-up Leisbeth Kanis (Anza Cycling). Louise Donaldson took the Women’s SuperMasters title.

Mountain biking will return to the Centaurs Trail on July 22 for the Singapore National Cross Country MTB Championships. These will take place on the Jungle Cross Pro circuit with a few modifications to make it flow better. The inaugural Singapore Cyclocross National Championships will also be held on July 22 on a different course at Turf City.

For full results of the Jungle Cross II, click on this link.