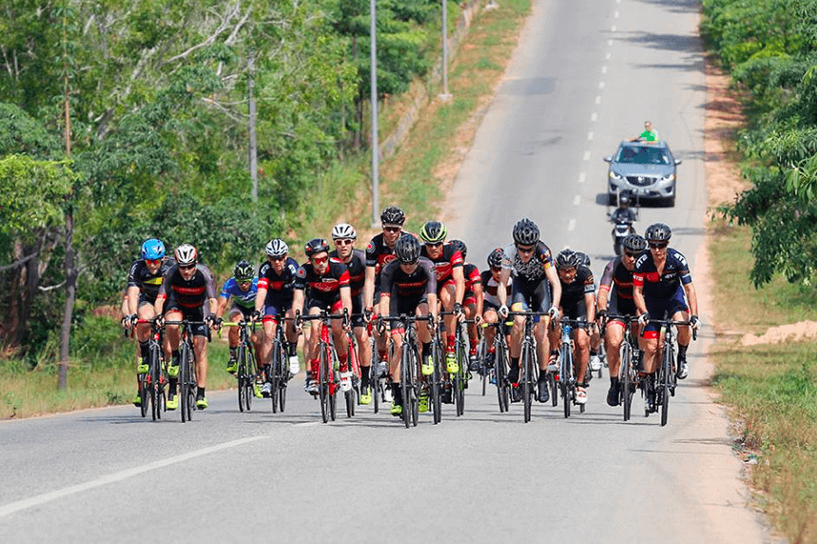 Batam, Indonesia,
February 17, 2016
The Cycosports Nongsa Challenge returned for its second edition on Sunday, and while one team might have dominated the podium in the elite Cat 1 contest, as one of the competitors put it nicely, the real winner on the day was cycling. With seamless organization, glorious blue skies, three thrilling contests and a festive post-race scene, Cycosports showed once again that it knows how to put a bike race on.

While taking place on the Indonesian island of Batam, the Nongsa Challenge was for all intents and purposes a race on the Singapore cycling calendar;  the vast majority of the 150 or so participants, Cycosports staff and volunteers that travelled to the race did so onboard a chartered ferry from the island republic. Positive steps are being taken by Singapore Cycling Federation to ensure that bike races actually take place on home ground in 2016 and beyond, but for the past few years, Cycosports has carved itself a niche by staging races within easy travelling distance of Singapore. It even lays on ferries to its events in Batam and neighbouring Bintan, and coaches to its races in Pasir Gudang, Malaysia.

All the Cycosports races have their charm, but the Nongsa Challenge has the potential to become the jewel in the Cycosports crown. Having the event hosted by the charming Turi Beach Resort, complete with sprawling pool to relax in and sumptuous lunch buffet to feast on post-race, plays a factor in that, but what makes the race so special is its course, the guts of which is a 12km circuit. The main feature of the loop is a series of three hills that start each full lap, closely followed by a sharp downhill right-hander. This stretch is just 2km in length but the stinging climbs and fast technical corner usually combine to jettison one or two riders each time around.

The remainder of the circuit is rarely, if at all, flat. The steady diet of rolling hills serves up a tough but fast test, with hardly a need to touch the brakes save for the afore-mentioned right-hand corner. None of the rollers are especially steep or long, meaning super quick speeds are attained on the sweeping downslopes, but the constant anaerobic efforts up the endless short, sharp climbs eventually take their toll on even the strongest of legs. One loop of the circuit features about 175 metres of elevation gain.

The 2016 Cycosports Nongsa Challenge was only the second edition of the race, the 2015 event having fallen victim to the notorious haze that plagued the region for several months last year. Those that had raced in 2014 were excited to return, with the newcomers equally enthused by all the positive reports. It’s a safe bet to say that none left disappointed by the race, even if some of their performances didn’t live up to expectation. 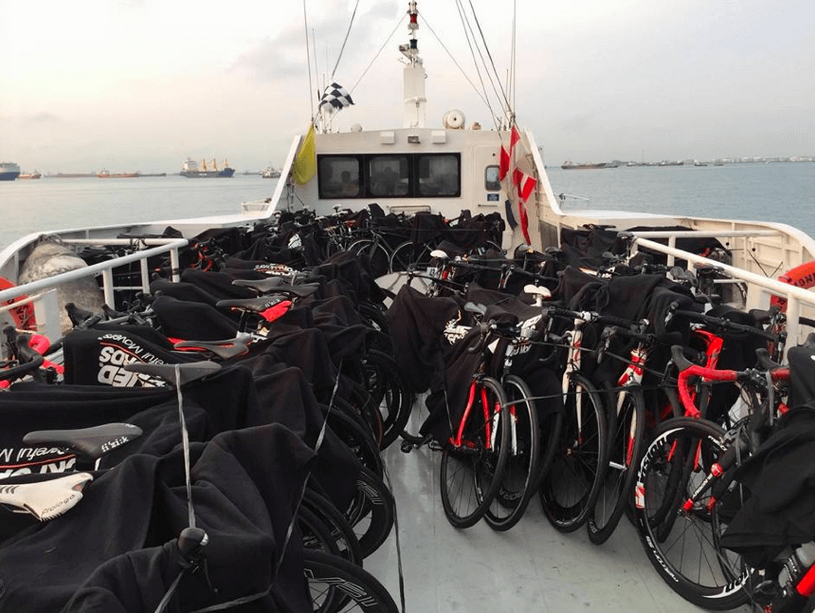 Bikes on board the good ship Cycosports
For those that suffered, perhaps the heat played a factor, with the race starting at 8am local time. Equivalent to 9am in Singapore, most weekend group rides in the Lion State are either over or nearly complete at such a “late” hour.

The staging area for the race was a sprawling park in the middle of Batam City, where it seemed as if the whole of the Indonesian island had congregated for their Sunday morning exercise ritual. Many among the hordes of badminton, sepak takraw, volleyball and football players, or the even bigger numbers of marchers and dancers, seemed bemused by this strange bunch of Lycra-clad cyclists gathering in their midst, but the result was a unique and festive mix-match of cultures for which to host the start of a bike race.

The Cat 1 riders rolled off first, with the first 13km of the 103km total distance neutralised as the route negotiated the busy roads of industrial Batam. The local police and Cycosports staff did a super job of marshalling the riders safely to the circuit, which is tucked away in a quiet northeastern peninsula of Batam. After the flag dropped to start the official racing, the Cat 1 competitors faced another 7km before hitting the main circuit, which they tackled seven times, although the first lap didn’t include the main triple-climb feature.

With four sizeable teams (Allied World CCN, CyclingTraining.Asia, Integrated Riding Racing Team and the Specialized Mavericks) as well as a number of strong individuals and smaller squads in the 35-man bunch, the racing promised to be hard fought and it lived up to that promise. Early solo attacks were kept dangling by the bunch before being drawn in, before on Lap 2 another individual thrust from Kristjan Snorrason (CyclingTraining.Asia) brought the first significant action of the race. Perhaps thinking it would peter out like the previous moves, none of the other teams seemed fully committed to the chase and the man they call Snozza was soon out of sight.

Eventually the peloton organised itself but it took well over a lap before the Australian rider was sighted and brought back in.The attack-and-chase theme continued for the next few laps, with mostly small groups replacing the previous solo efforts, but the peloton seemed to have learnt its lesson and wasn’t in the mood let anything go. Midway through Lap 4, though, Nick Swallow (Specialized Mavericks) drifted off the front. In a similar fashion to the earlier move from Snorrason, Swallow quickly increased the gap between him and the once-again indecisive bunch, and before long had disappeared from view.

Incredibly Swallow stayed out in front by himself for most of the second half of the race, picking up a hatful of points on his way to clinching the KOM competition, which was scored at the top of the first main climb on each full 12km lap plus the finish line.

Behind Swallow the chasing seemed sporadic, with long, hard efforts followed by periods of calm. Midway through the penultimate lap, though, a group of three riders, Hish Scarf (Allied World CCN), Tim Clarsen (Mavericks) and Todd Sinclair (CyclingTraining.Asia), managed to separate themselves from the main bunch and it looked like this trio was the best bet to catch Swallow. 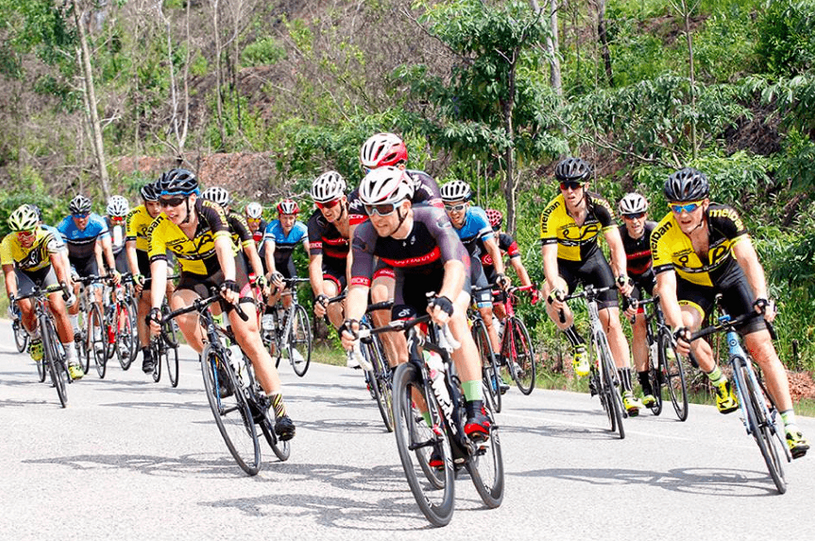 The colourful Cat 1 peloton
But then with one lap of the 12km circuit to go, Ben Arnott (Mavericks) launched a stinging attack that left the peloton for dead. Having hidden in the pack until this point, Arnott had bundles of stored energy that he used with deadly force to first sweep by the group of three, and then with about 5km to go, catch his teammate Swallow. With the latter obviously fatigued from his mammoth solo effort, Arnott eventually pressed on alone, and by the time he reached the left turn into a tough triple-stepped climb to Turi Beach Resort and the finish line, he had the win in the bag and had the time to sit up and savour his victory.

Swallow easily held on for second place, just 13 seconds behind Arnott, while another Maverick, Andreas Ostern won the bunch sprint, just pipping his teammate Bastian Dohling for third place and the last spot on the podium. Ostern was over a minute behind the winner, though, which showed just how deadly the last-lap attack from Arnott was.

With the team prize calculated on the lowest aggregate time for each team’s first three riders, the Mavericks obviously took the team prize too.The outcome of the Cat 2 race played out a bit differently but was another thrilling contest. A couple of hard attacks from the flag by Matt Lodge (Specialized Mavericks) saw a nine-man group form, comprising three SwiftCarbon Virgin Active men and two each from the Mavericks, 4T2 and Team Next Stage.  With all the major teams within the Cat 2 field represented in the break, the onus to chase was on the smaller teams, so it wasn’t a complete surprise that the eventual winner and podium placers emerged from the initial breakaway.

Cat 2
The Cat 2 racers also faced seven laps of the circuit, and with not much room to hide in a nine-man break, the battle upfront became a war of attrition as the hills and heat took their toll. A combination of questionable tactics, fatigue and untimely mechanical issues meant that as the race entered its final quarter the lead group was down to four. Joining Lodge was his teammate Richard Paine, Dan Smith (SwiftCarbon Virgin Active) and Noriyuki Tanaka (Team Next Stage). The quartet was still together with about 5km to go, when on one of the steeper rollers around the back of the circuit, the two Mavericks launched an attack that caught their breakaway companions by surprise. The initial gap quickly grew as the teammates put their heads down and went for the glory.

That glory duly came for Lodge as he proved stronger than his teammate and soloed up the triple-stepped finale for an impressive wire-to-wire victory. Paine finished in second place with Smith outlasting Tanaka to take third place.

Lodge, usually known as a sprinter, also won the KOM competition and he and his Mavericks teammates took the team prize. 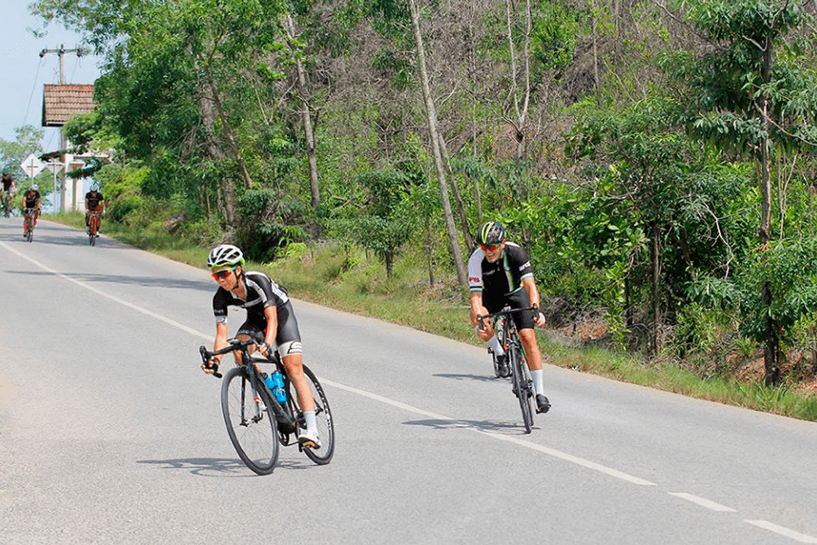 Women’s winner Serene Lee takes a downhill corner with ease
Women/Cat 3
The final and largest group to leave Batam City was the combined Cat 3/Women’s field. Those 50 riders faced five laps of the circuit, giving them a distance of 80km. Notable in the field among the familiar Singapore club names such as Anza Cycling, the Joyriders and Barbarians REVSIN, were two Singapore varsity teams from Yale-NUS College Cycling and Singapore Polytechnic Cycling, as well as a local Batam outfit, KGB Indonesia.

Despite the shorter distance, attrition was again the name of the game in the Cat 3 race, but at a noticeably quicker rate than the previous two races. Perhaps it was the pace set by the leaders; the organisers pre-race warning to the Cat 3 bunch that they would be swept up by the Cat 1 race never materialised. At least not for the lead bunch, which was only about 15-strong halfway through the race. Only two women remained at this point, Singapore national rider Serene Lee (SwiftCarbon Works) and professional triathlete Kathryn Haesner (Arrivo Primo Singapura).

Looking strongest on the course among the Cat 3 men was Ahmad Yani (KGB Indonesia), taking 38 out of the 40 KOM points available from the circuit portion of the race. Armed with a couple of teammates, Yani looked the favourite for the win from the dwindling group as the riders approached the finale. He duly took the punishing sprint up the three hills to win by a clear three seconds from the next rider across the line. That person was Lee taking the women’s crown, just pipping the Cat 3 runner-up Malcolm Wyatt (Anza Cycling) and the second lady Haesner. That quartet broke clear of the rest on tough finish, leaving Roy Widhijanto (KGB Indonesia) and Kazuaki Takabatake (SwiftCarbon Works) to battle for the final Cat 3 podium place, with the Indonesian rider just outlasting his rival. The third placed rider in the Women’s race was Dione Wang (Arrivo Primo Singapura).

It was a very good day for Yani who added the KOM prize to his race win, while also leading his KGB Indonesia squad to the Cat 3 team prize.
Full results from the 2016 Cycosports Nongsa Challenge can be found here.

For the next event on the 2016 Cycosports Series, the company breaks new ground, with a new country and the team’s first multi-day event, the Tour de Phuket. This three-stage race is set to take place from March 18-20 at the stunning Thanyapura sports resort in the southern Thai island of Phuket. For full details and how to register, click here.

Photos by RickyWihendar / Batam Tourism Board
This article first appeared on www.secondwindmagazine.com.
Proudly powered by Weebly