December 19, 2016
​The MacRitchie Runners 25 are defined by their bi-monthly 5km time trial, but the people who run the famous club like to end the year with a bang by staging a race a little bit longer … an ultramarathon.

The 2016 Hoka MR25 Ultramarathon kicked off at 7am shortly after dawn yesterday and didn’t end until the sun was saying goodbye for the day at 7pm. While most ultramarathons – defined as any foot races over the 42.2km of a marathon – have a set distance, the MR25 Ultra tasks its competitors with completing as many laps of the famous MacRitchie Reservoir Park trail in 12 hours.

The traditional anti-clockwise loop for the MR25 Ultramarathon is about 10.6km long, and to qualify as a finisher in the MR25 Ultra, the competitors need not run the full 12 hours, they “only” have to complete five laps, i.e., 53km. Anybody who has run a full marathon can easily imagine how tough those extra 11km must feel, and especially around the MacRitchie cross-country course.

For this year’s edition of the race, trail maintenance works around MacRitchie Reservoir meant the full loop was inaccessible, so MR25 had to improvise and came up with what was basically an out-and-back circuit. 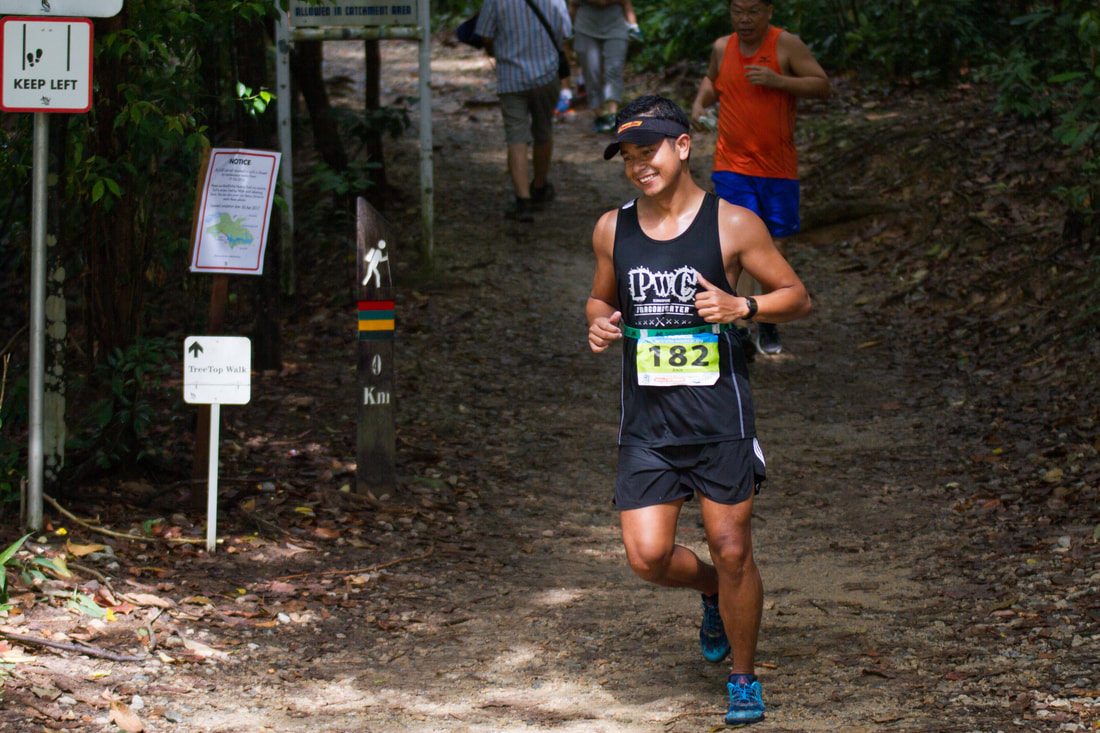 If anything, this made the course more difficult for the 180 competitors who started the race, as the toughest of the slopes on the hilly circuit are packed into the first half of the traditional loop. MR25 president Stephen Lee concurred.

“I've been running here for maybe 40 years, so yeah it's a bit more difficult to do the u-turn back than do the whole loop. It's a bit harder. But NParks are doing renovations on the loop, so no choice we need to do half the loop and turn back the same way. It’s 10.5km, almost the same like the whole loop,” Lee said. We spoke to the MR25 chief about three hours into the race at the start-finish line, which was set up next to the MacRitchie car park.
​
“The MR25 Ultramarathon started in 1979, three years after the inauguration of our club. The record still stands at 12 loops,” Lee told us.
​
The MR25 record books show that the person to manage that amazing feat was one Rem Bahadur Thapa, who did it in the year 2000 race. Thapa ran more than 127km to set that record, which would be an incredible distance to cover over flat ground, never mind on the rocky, undulating terrain of the MacRitchie trail. 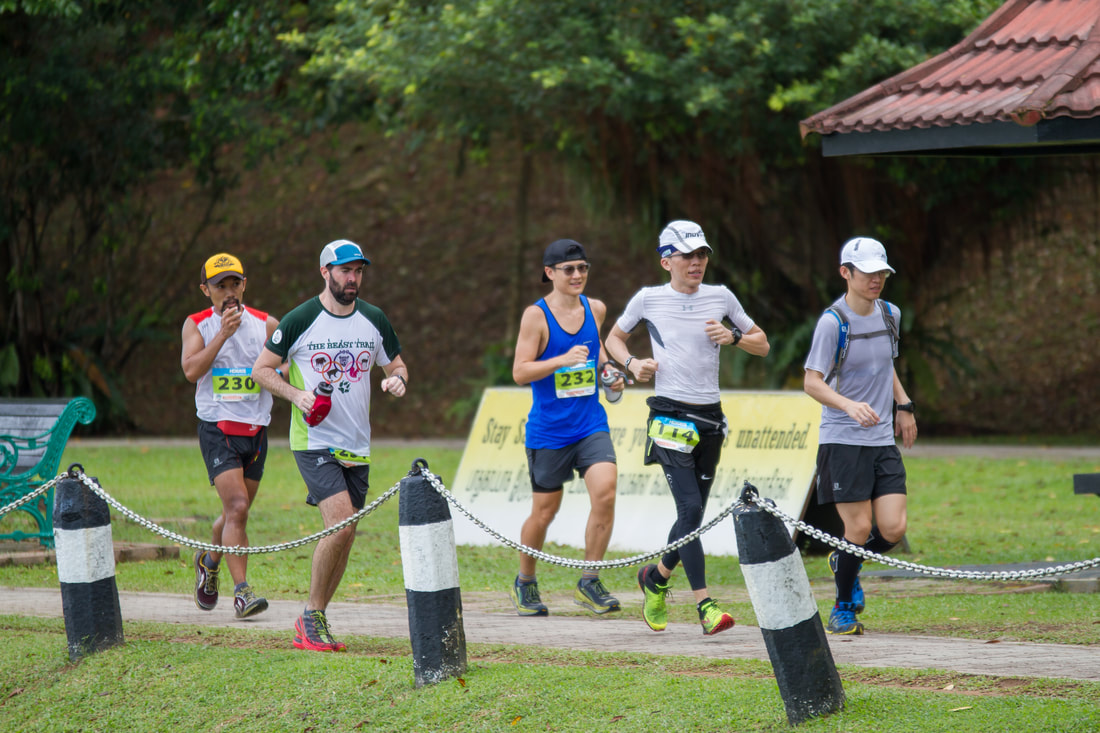 Lee doubted anyone would match that record yesterday – “I think the winner can do about 10 laps because of the weather today” – and he proved to be correct.

A pre-dawn storm, which thankfully stopped just before the race started, kept the temperatures relatively cool for the first few hours, but the conditions underfoot were quite treacherous, with the competitors having to deal with uneven, slippery descents and bogs of mud.

The hot, tropical sun soon burned its way through the clouds, though, rapidly increasing temperatures and this coupled with condensation rising through the jungle meant MacRitchie was at its humid worst.

But the men and women racing were ultrarunners, the toughest of the tough, and none lined up expecting an easy day. It surely takes a touch of madness to want to run all day, but ultrarunning is rapidly growing in popularity throughout the running world as people need somewhere to go as they graduate from 5km, 10km, 21.1km and the marathon. Indeed, the MR25 Ultra is not the only race of its genre in Singapore, the North Face and Craze Ultras being two notable others.
​
The 2016 Hoka MR25 Ultramarathon runners had their task made easier by a big team of race marshals who lined aid stations throughout the course and at the transition zone just past the start-finish line. ​ 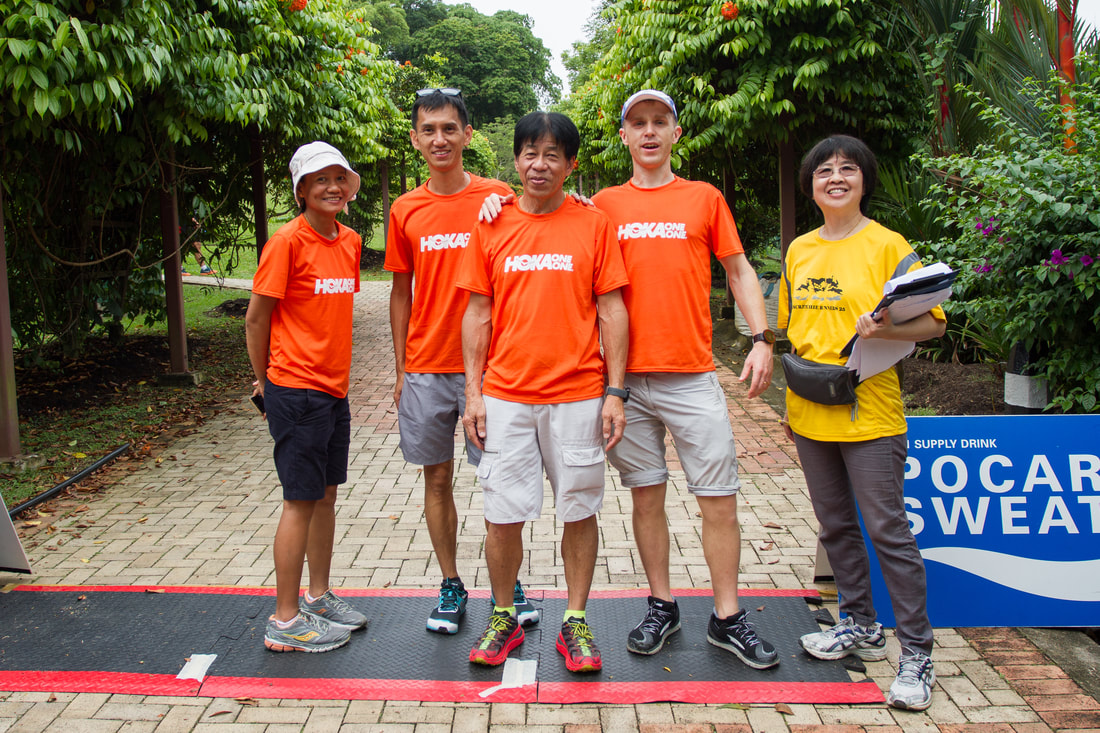 MR25 president Stephen Lee and some of the enthusiastic volunteers
According to Lee there were about 80 of these marshals.

“All volunteers too. Family members, friends, wives, husbands, everybody chips in to stage this race. We always like to make it as a family run, a well organised race for people to enjoy. That's the most important thing. We don't want to make profits from this race because this is a non-profit organisation. We just want to organise a good race for the runners,” he said.

That they did as always. Ultramarathons are about lasting the course, not pure speed, so it’s not unusual to see competitors taking their time at the transition zone, where they graciously accept the assistance of the voulunteers in tending to minor ailments and making sure they get into their bodies the nutrition required to last the course.
​
The ever-changing scene at the transition zone yesterday revealed a diverse line-up of competitors; male and female, young and old, local and expat, slim and not so slim. The choice of attire, shoes and equipment was diverse too, with many clad in traditonal shorts and singlets, but also on display was the latest in compression gear, a myraid of hyrdration equipment, and even one runner clad in plaid. ​ 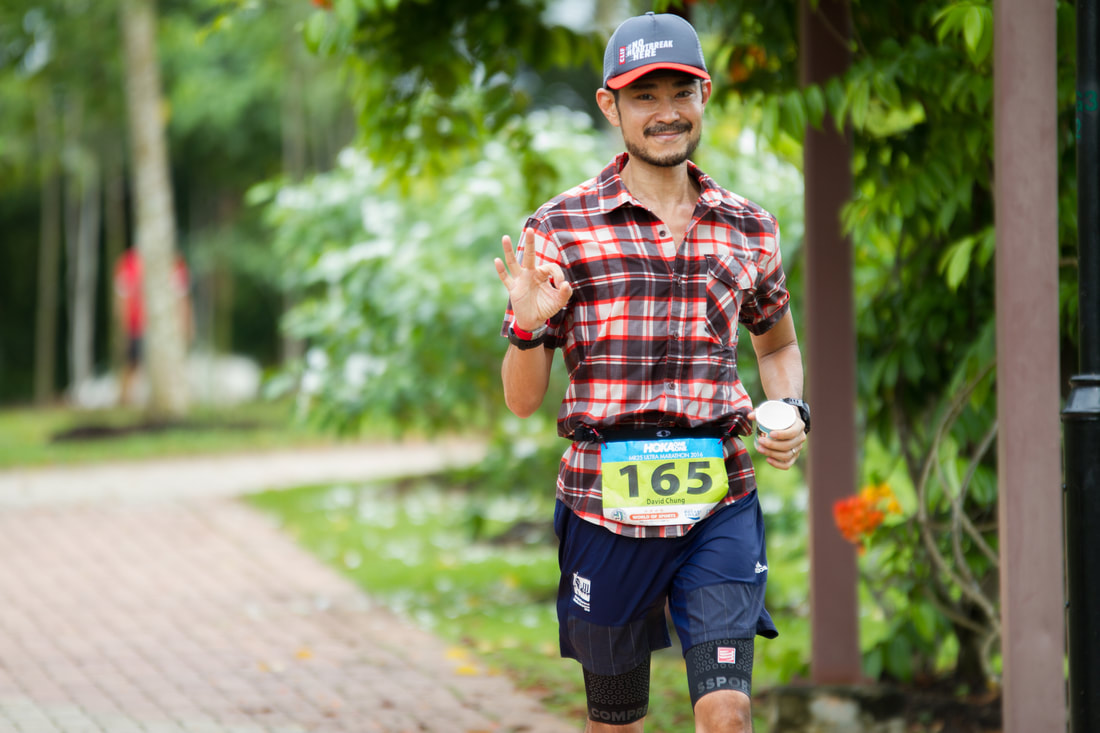 To each his or her own, even the guy who was running in what looked like a pair of open-toed sandals.

They ran in mini packs and in pairs but increasingly as the day wore on, mostly alone, as the fatigue hit each individual at a different pace. But a bonus of the out-and-back format of yesterday’s race that was that the entire field got to see and encourage each other throughout the day.

Stephen Lee’s prediction of nobody completing 12 laps was correct. The winner of the Men’s Open category in the 2016 Hoka MR25 Ultramarathon was Hoong Wei Wong. He managed 10 laps of the course and ran those 105km in a time of 11 hours, 35 minutes and 47 seconds. The runner-up, Hiroto Ogawa,also managed 10 laps, but he completed them some 10 minutes slower than the winner. The final place on the podium Lim Sin Soon, one of three runners to manage nine laps.

Soo Tan emerged as the champion in the Women’s Open race, having completed eight laps in 10:54:19. Two other ladies managed eight laps; Lynn Woo, who was some 20 minutes back in second place, and Phei Sunn Sim in third.

In all, 155 runners completed five laps of the course within the stipulated 12 hours, making them all winners.

Click on this link for full results of the 2016 Hoka MR25 Ultramarathon.