Photos courtesy of MetaSport
February 12, 2018
With a stacked field of elite athletes the 2018 MetaSport Aquathlon promised to be an exciting affair and it certainly delivered as Tim Cosulich produced a scintillating performance to win both the Men’s Elite and the Champion of Champions titles by the narrowest of margins at Sentosa’s Palawan Beach yesterday. Anna Eberhardt took the Women’s Elite crown and was so close to winning the Equalizer “battle of the sexes”, only being caught by Cosulich with 500 metres to go.

Race organisers MetaSport must keep a weather genie in their office as year in, year out the sun shines down out of clear blue skies on the Aquathlon, the traditional opening leg of the MetaSprint Series. Even as the dawn broke at 7am, there was already a buzz about the picturesque Palawan beach as the big field of participants and even larger crowd of supporters started to gather. 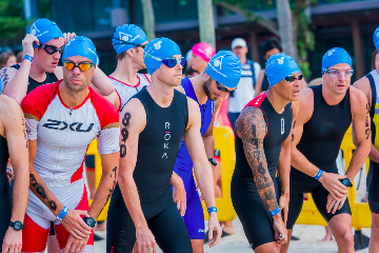 The elite men raring to go
Since its inception in 2008, the MetaSprint Aquathlon has always been both a great way for veteran racers to open their multisport seasons and the perfect stepping stone for those looking to dip their toes into the world of triathlon; the calm, sheltered waters of Palawan Beach remove a lot of the intimidation factor from open-water swimming, and the run takes place along the shaded shores of stunning Sentosa.

The second leg in the series, the run-bike-run MetaSprint Duathlon (set for March 11), gives rookies a chance to cycle in the safety of wide, closed roads, and by the time the closing MetaSprint Triathlon comes around (April 15), the newcomers are ready to put all three triathlon disciplines together if they choose to do so.

There was a record number of newbies entered across the MetaSprint Aquathlon’s Sprint, Discovery, Youth and Kids categories yesterday. As usual, it was also a family-friendly affair, with many mums, dads and children racing in the various events.

The MetaSprint Series really is “a fun way to be a triathlete” as the event tag proudly proclaims. 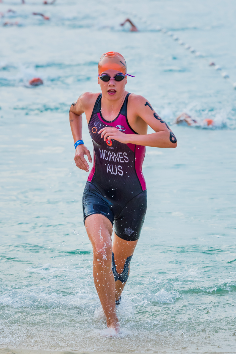 Mcinnes setting the early pace
The action started with the elite athletes, though, and at exactly 8am the top-ranked women splashed into the water. The best male swim-runners followed 3 minutes and 4 seconds later to set up the “Equalizer” element of the race.

Based on the previous years’ results in the MetaSprint Aquathlon, the female elites are given a head start, with the first athlete of either gender across the finishing line crowned the Champion of Champions.The MetaSprint Duathlon and MetaSprint Triathlon also have this Equalizer feature, which adds an extra thrill to proceedings.

And sure enough it was one of the youngsters, the Phuket-based Mcinnes, who led out of the water after a scintillating swim leg of 11 minutes and 43 seconds for the 750 metres. This gave the young Brit a sizeable lead of 35 seconds over the next swimmer April Rice, with Emma Middleditch third, a further 10 seconds back.
Meanwhile, Eberhardt emerged from the sea a full 90 seconds after Mcinnes, leaving her a lot of ground to make up over the 5km run.

But that’s exactly what the Hungarian managed to do in what became a thrilling foot race. Eberhardt had a steady stream of targets ahead of her, and she gradually caught and passed them all until there was just Mcinnes and Middleditch. She timed her chase perfectly, reeling the youngsters in within the last kilometre. And although she was caught by men’s winner Cosulich, she strode on to take the women’s title in a time of 32 minutes and 14 seconds. Middleditch was the runner-up, some 13 seconds behind, with Mcinnes a further 8 seconds back in third.

“I knew I was going to be quite far behind the young ones after the swim, but I took it as a challenge,” Eberhardt said. “I had my running legs on today, so I slowly but surely made up the gap and with around 500 metres to go I moved into the lead.” 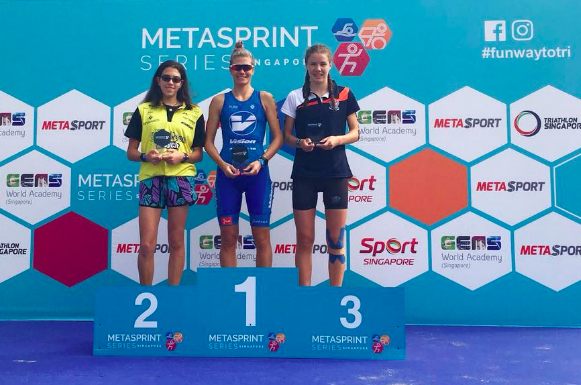 Eberhardt said she was impressed with the generally high level of competition, and wasn’t too disappointed about losing out on the Champion of Champions title by just 7 seconds.

“But next time at the Duathlon, you can count on me,” she said mischievously. Watch out Cosulich and Co!

If the women’s elite field was strong, then the men’s was positively herculean. Among those joining Cosulich on the beach were last year’s Aquathlon champ Colin O’Shea and his fellow podium placers Andy Wibowo and Aaron Kiss, plus Singapore triathlon champion Bryce Chong, Indonesian national triathlete Jauhari Johan and the evergreen James Middleditch. 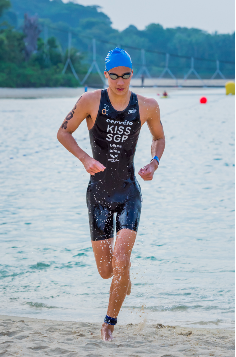 It was the young Australian Kiss who proved the strongest swimmer by far, the high-schooler’s fish-like split of 9 minutes 52 seconds for the 750m being 15 seconds faster than Chong, and a whopping 45 seconds ahead of Wibowo and O’Shea, who hit the beach together.Cosulich was just 10 seconds behind them and after a swift transition soon caught up with that duo, who he had identified pre-race to be his main rivals.

The Italian Cosulich opted for a strategy of relentless surging and this tactic soon put paid to the Indonesian superstar Wibowo’s chances. Chong too faded on the run and after Cosulich and O’Shea caught and passed Kiss, it looked like a straight dogfight between them for the title.

Cosulich continued to surge and eventually the Irish defending champion couldn’t respond, leaving what appeared to be a clear path to victory in the men’s race for the Italian. He could also by this stage see the lead women ahead, and found another gear in an effort to catch them.

This he did in the finishing chute, but what he hadn’t counted on was another male athlete coming from behind to try and spoil his party. The would-be gatecrasher was Jauhari, who had shot through the field after a relatively poor swim.

Alas for the Indonesian, he came up short, losing by just one second to Cosulich, who broke the tape in a time of 29 minutes and 3 seconds. O’Shea wasn’t that far back in third either, at just 12 seconds slower than the winner.

Post-race, Cosulich was a happy man but surprised man.

“I’m very happy with the win and to be honest it’s quite unexpected because these two guys Andy and Colin are really strong both on the swim and the run. I’ve beaten them in the past in longer races, but never in a sprint. They’ve always kicked my ass in the shorter races,” Cosulich said.

“And also there’s the young guys, and you never know because these guys are so fast in the swim and you don’t know how long they can hold on the run,” he added.

“I was happily surprised by not being too far behind after the swim and then I was also quite quick in transition, which is unusual for me too. I caught Andy and Colin just before the first turnabout. Andy was obviously suffering so he dropped back. I tried to surge on Colin a few times and it was only after the fourth or fifth time that he finally dropped back,” Cosulich said. 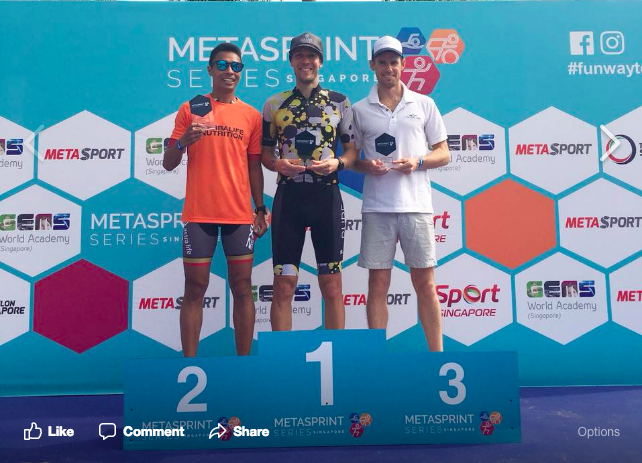 “And then I saw the two girls out in front and I tried to catch them, which I managed to do just before the finish.”

What about Jauhari, was Cosulich aware that he was so close?

“Initially no, but after I broke clear of Colin I looked back to check on him and could see Jauhari coming in the distance. He was really closing in on me in the finishing chute but by then I knew he wouldn’t catch me.”

Cosulich has his eyes set on the overall series.

“Yes, I will be back for the duathlon and triathlon. They are really good, well-run races and I like to support MetaSport who always do such a good job at organising races.” 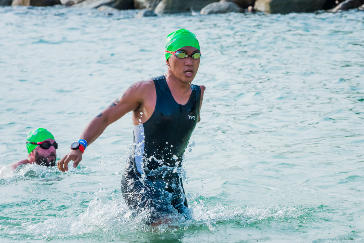 As the elite racers recovered in the pop-up MetaSprint Festival Village, the 1,500+ other athletes, suitably inspired by the top dogs, got their chance in the spotlight. The racers were set off in a series of small, age-group waves, or they had the option of starting in a “friends wave”.

Seasoned racer or complete rookie, each competitor had a tale to tell by the end of the morning.

Among the notable race-day stories was that of para-athlete Alex Nino Silverio (pictured left)  of the Philippines, who despite only having one arm finished 22nd out of 66 finishers in the 25-29 age group of the Sprint-distance race.

And then there was cancer survivor and advocate Raymond Howe, who just missed out on a podium place by two seconds in the 40+ division of the Discovery Distance race (250m swim, 2.5km run).

All the MetaSprint Series events finish with the youngest athletes, and the Youths (for 12-15 year olds) and Kids (for 8-11 year olds) races always provide a lot of excitement for the competitors and their parents alike.

And for the first time yesterday, a non-competitive Kids Dash was added to the race-day program, where children as young as four got their chance for some fun in the sun.

The Youths competed over the 250m-2.5km distance and the boys’ Youths race had a runaway winner in the shape of Matthew Trott. The battle for second place was much closer, with Lucas May just holding off Ernest Low by 3 seconds.

The girls’ Youth champ Tania Tong was also a clear and wire-to-wire winner, while the runner-up Enola de Smet made up a nearly 1-minute deficit in the swim to pip the third-fastest girl Elizabeth Rose.

The Kids faced a 150m swim followed by a 1.5km run. Elgin Low used a strong swim as the springboard for his win in the boys’ race. Second place went to Max Lee 7 second back, with Daniel Louw a further 15 seconds back in third.

Eliza Tan was the girls’ Kids champion, winning by 12 seconds from Rey Min Soh, who just held off the third-fastest finisher Sybella Hawley.
Full results for the MetaSprint Aquathlon can be found at www.metasprintseries.com/race-results/.

The 2018 MetaSprint Series moves onto the MetaSprint Duathlon at the F1 Pit Building on February 11. Entries are still open, but it should be noted that a price increase goes into effect on February 14 at midnight.

The series ends on April 15 with the MetaSprint Triathlon at the East Coast Park.

For full details about both races and to register, visit www.metasprintseries.com.

This report was also published at www.metasprintseries.com.
Proudly powered by Weebly