Having not managed a win in the previous three Cycosports races, the men of the Specialized Mavericks boarded the ferry on April 13 for the Bintan Lagoon Classic with the goal of changing that state of affairs. The mission proved to be a resounding success with a Bastian "//r" Dohling-led 1, 2, 3, 4 clean-sweep victory in the Cat 1 contest and a fine solo win for Richard "Oldish" Paine in the Cat 2 race.

It was an early start for the 15-strong Mavs squad that made the 90-minute crossing to the Indonesian island of Bintan for the second event in the 2014 Cycosports Race Series. The fields were distinctly smaller than the previous Cycosports races, partly as a consequence of the organizers being forced into moving the race back a week due to the Indonesian elections, which meant a clash with triathlon events in Singapore and Putrajaya.

The day promised to be brutal what with temperatures already in the mid 30s Celsius at 9am and a relentlessly rolling course of 128km ahead. The small fields also meant less places for people to hide.
Cat 1 – Aggression pays dividends 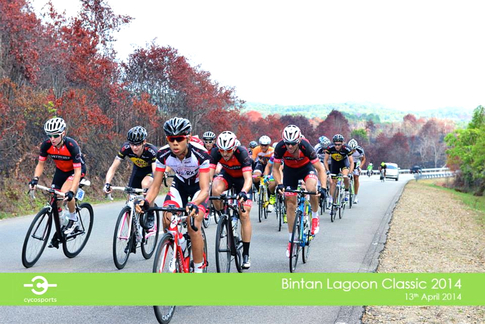 Seven Mavs lined up among the 30-odd starters for the Cat 1 race. Both the Joyriders Racing Team and Cannasia had similar numbers and while Team Direct Asia Anza only had four men, with Pierre-Alain Scherwey in their ranks, they were also definitely a threat. The route featured some familiar sections, such as the "Checkpoint Charlie hills" in both directions and other parts of the Tour de Bintan stages 1 & 2, but Cycosports had also found some new roads to ride on within a main figure-of-eight loop circuit.

A gentle start out of the resort allowed the racers to scope out the finishing stretch and even when the flag went down to signal the start of the racing after 4km, the pace wasn't too hot. That all changed around the 10km mark when a left-hander signaled the start of the day's first test, the TdB KOM hills. The Mavs has intended to attack en masse here but others had the same idea and a torrid 10 minutes followed, with the result that by the end of the 10km section to Checkpoint Charlie, the small field had already jettisoned a few out the back. 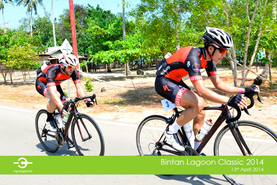 Walnut, Fishy, Pigeon and //r were all active on the front in the first 40 minutes of action, and eventually it was one of many stinging digs from //r that saw him create a gap that stuck. He ended up staying out front for some 20km but the bunch had him within its sights during most of this period.

Not long after //r was finally brought back, Rambu drifted forwards for the first time in pursuit of a Cannasia rider who had opened up a small gap on a roller. Cresting the hill, he inquired if said Cannasia lad fancied a little excursion and when the offer was declined the hairy one decided to put his head down anyway and preceded to enjoy the next 25km in his own company. About the 70km mark he was finally joined by a trio made up of fellow Maverick Pigeon, a Cannasia man and a Joyrider who had broken clear of the peloton.
With half of a four-man group, it looked promising for the Mavs that this move might stay away, but a headwind revealed its presence as the route turned left turn onto the coastal highway section and despite the foursome sharing the load equally, it was hard going. Then, when the commissaires announced to the quartet that the peloton was in pursuit and only 500 metres back, Mr Joyrider sat up leaving the trio to push on. But the group soon became four again with the arrival of a flying //r. The pace immediately shot up as Pigeon and Rambu found themselves rejuvenated but the peloton was still bearing down.
Cat 2 – You can't keep an old(ish) dog down
With six strong Mavs – Amez, Pony, Fiddler, Beatros, Oldish and Pimp – all in good shape, the Cat 2 Mavs went into the race with great flexibility. Pony and Tony were instructed to save their legs in case the race went to a sprint but the other four were given free reign. From the start, "save-your-legs-Pony" drifted off the front and hung out there for quite some time feeling the breeze. He was joined by a Bikelabz boy and the duo quickly accumulated a lead of some 30 seconds. Into the climbs out of Bintan Resorts to Checkpoint Charlie, Beatros and Oldish put in a little dig and gapped off the peloton and slowly rode across to join the front two. 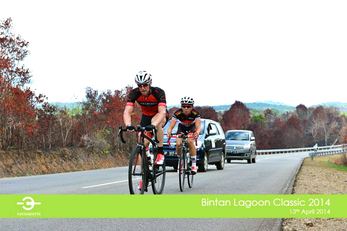 It was early in the race, and as expected the move was closed down by the peloton, but it marked the Mav intentions; like their Cat 1 brethren the mode for the day was simple … attack!

Next to boldly go was Amez and he duly disappeared down the road. Another rider pursued and caught Amez and they built a nice gap, perhaps as much as two minutes over the bunch. It was inevitable that more chasers would emerge and when a duo duly broke free, Beatros darted across to join them. These two groups eventually merged and with Amez and Beatros among the five and a hill finish ahead, it was a good outlook for the Mavs if this move stayed away. But eventually a big diesel engine emerged from the pack and drove the bunch hard and the escapees were brought back. 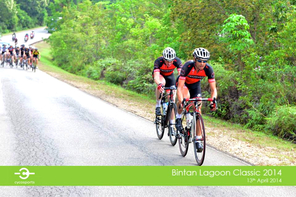 While drifting to the front to check on how the two Mav attackers were feeling, road captain Oldish "launched" one of his signature soft attacks, where he seems to drift away slowly. An Anza man, Ståle Grindflek, joined him and soon they had built a small gap. With both having big teams behind ready to control the peloton, the scene was set for the decisive move of the race. The pair had come together with roughly 60km to go and they quickly hit a good tempo. As the kilometres ticked off, and every look over the shoulder revealed nobody in sight, Oldish began to consider his chances.

He and his partner were sharing the workload nicely but the wily old fox knew that at one stage he'd have to turn his new-found friend into a foe, and this moment arrived soon after they completed the tough Tour de Bintan KOM climb section and turned right for the 10km dash for home. 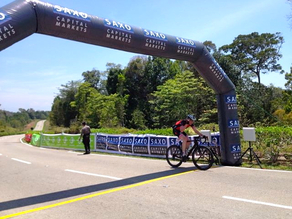 When a bout of paranoia kicked in and Oldish thought the bunch was coming, he announced he was going to push on, but the Anza man couldn't go with him and so the merry Mav was on his own and looking good … until the cramps kicked in. He dug into his vast stores of experience to overcome the spasms and the victory was his, spinning up the tough finishing climbs to a well-deserved victory.

After three runner's-up spots in a row in the Cycosports races, the Cat 2 boys were delighted to get rid of their own monkey too. They had another goal for the day, the team prize. This was duly secured as Pimp and Pony led a small bunch over the line to take fourth and fifth (Grindflek had held on for second and the Joyriders' Michael Gronbech took third), with Amez and Beatros also snaring top 10 finishes. The bold Fiddler, in the form of his life, took a top 20 spot, which could have been higher if not for yet another selfless pull in the run in. .
The Princess delivers for the ladies
There wasn't so much pressure on the two Sarahs, Doyle and Clark, to deliver a win at the Bintan Lagoon Classic, with the women's section of the Mavs having won the first two Cycosports races in 2013 through Serene Lee and Veronique Florizoone respectively. But the Sarahs still went into the race with hopes high and they were both in great form.

They faced a small but tough field including the trio of SJ Fraser (Eddie Hollands Bicycle Service), Aiyana Currie (Anza) and Wendy Yap (Joyriders), fresh from the women's Tour of Thailand UCI race. As usual with the Cycosports events, the ladies raced with the men of Cat 3, but the organizers had appealed for the men not to assist their female club mates as had happened in the past. "Let the girls race themselves," was the plea. 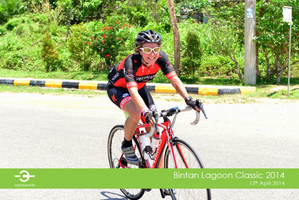 Alas for Ms Clark her race was over almost before it began with a mechanical seeing her off the back within the first 10km, leaving her to complete the remaining 118km in scorching heat in what she described as a "long, lonely training session". With an attitude like that, the newest Mav is a welcome recruit to the ranks.

Back up front, the grande dame of the Singapore cycling scene Christina Liew, was doing a lot of the early work and looking strong. The remaining Sarah Mav, or Princess as she's affectionally known, sat in and kept an eye on her main rivals. About 30km in Fraser shot off like a rocket and Princess set off to catch her. They worked well together for a while, sharing the burden, but eventually sat up when they thought the bunch was closing them down. As it turns out the peloton took an age to close the gap and so the duo were left to second guess their decision.

The main protagonists marked each other closely for the next 50km or so but then Yap made it into a break with a few of the men. Princess was suffering from the dreaded cramps by then and made the decision not to chase, in hindsight another costly decision as Yap rode on strongly and managed to stay away for a much-deserved win. Behind, there was still much to race for, with second and third up for grabs. 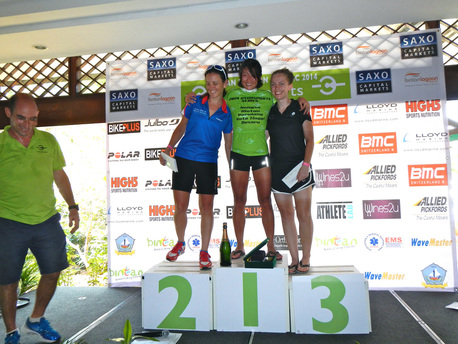 Princess, still plagued by the cramps, decided to wait for the sprint rather than attack, even though she had a good idea that Fraser at least would get the better of her. That left third as her goal but she knew she'd still have her work cut out as the formidable figure of Currie was riding strong. Indeed Currie launched a few attacks in the final few kilometres but Princess dug deep despite the cramps and latched on to her wheel each time.

To the last bend and Currie was again in front followed by Princess, then Fraser. As expected Fraser surged strongly for the line and took the runner's up spot but Princess put her head down, sprinted hard and held off Currie for the final podium spot.  The young Irish lass was delighted with her third place showing but was also very proud to be a female cyclist on a day when the women sat on the front for a lot of the mixed-gender contest.

The Specialized Mavericks would once again like to thank Cycosports for putting on a tremendous event. The Mavs will be back in numbers for the next event in the series, the second edition of the race that kicked the whole Cycosports phenomenon off, the Batam Six Bridges Race (a.k.a. the Tour de Barelang) on May 24.
The Mavs racing the Bintan Lagoon Classic were:
Flatspokemedia would like to thank Richard Paine and Sarah Doyle for their valuable contributions to this report and to Cycosports and Andrew Cherriman for the  images.
Proudly powered by Weebly