All photos courtesy of Cyfora
Flat Spoke Media’s Alan Grant journeyed up to the Malaysian administrative centre of Putrajaya with a squad from the Specialized Roval Mavericks last weekend to participate in that unknown thing to Singapore, a long-distance road race. The event, the Cyfora Cyberjaya, was the second in a three-race series spread throughout the year and was another example of how Malaysia can stage first-class cycling races when it wants to.

August 3, 2018
There’s no doubt the Singapore road racing scene is much healthier than it was just a few short years ago, but it still lacks proper road races. A steady diet of crits, time trails and novelty contests is great, but staging 100km+ races on Singapore’s roads is still but a dream. Even the three big “local” events (Tour de Bintan, Tour de Kepri, SG National Champs) are staged on the Indonesian islands of Bintan and Batam.

There is, though, a plethora of road races over the border in Malaysia, although some are better organised than others. Indeed, entering a race in Malaysia involves a fair bit of risk as it’s not uncommon for events to be canceled, some even at the last minute. Tales abound of dodgy promoters pocketing registration fees then doing a runner, while other races have suffered due to a breakdown in negotiations over “policing costs”.

Luckily, the latest big road race held over the border, last Sunday’s Cyfora Cyberjaya, had no such problems and was in fact a shining example of how a first-class amateur event can be executed with the right mix of knowledgeable organisers, generous sponsors, agreeable local authorities and of course, enthusiastic competitors. 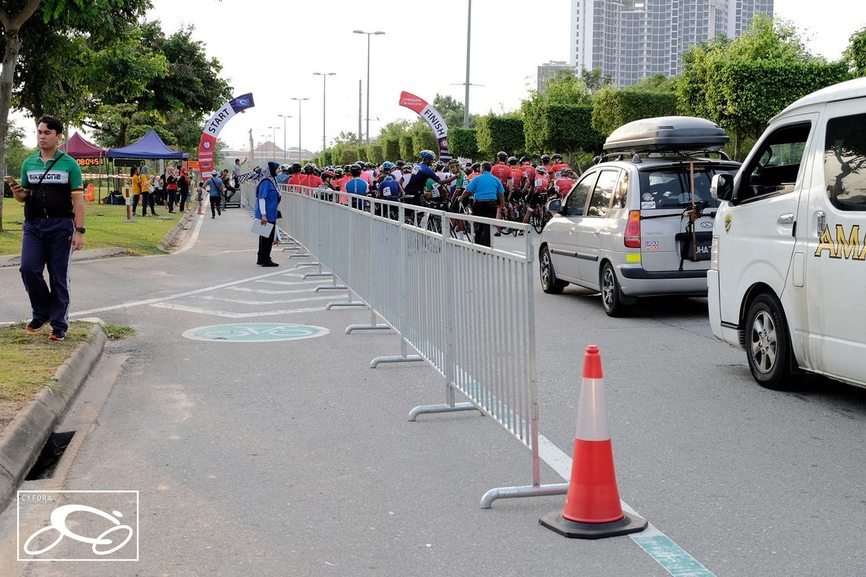 Barriers, a branded gantry, team cars, excellent traffic control, an abundance of officials, a competitive field ... the Cyfora Cyberjaya had it all
The Cyfora Cyberjaya was the second race in a three-event series for 2018 and attracted a field of just under 200 riders. The trio of races actually mark a rebirth as the Cyfora Series originally started during the mid 2000s before having a break for a few years. The first event in the 2018 version, the Cyfora Melaka, was held on April 1 (it clashed with the Singapore TTT champs), while the concluding leg of the series on November 25 involves the 40km climb of the iconic Fraser’s Hill.

Individual awards were up for grabs at Cyfora Cyberjaya, but the main focus of the race and the entire series is the team competition. The format requires the teams to contain at least one rider from each of four age-group categories: under 25, 25-34, 35-44 and 45+. In addition, no more than three riders of each team can come from any single age group.

The result for the Cyberjaya event was a field comprising complete rookies, hot-shot youngsters, elite riders, weekend warriors and gracefully aging uncles, a fitting mix for a race series whose title is derived from the term ”cycling for all” ... although there were no women riders.

The contest drew around 20 teams, including an eight-man squad from the Singapore-based Specialized Roval Mavericks, who proved to be the only non-local team in the field. The riders started in one big peloton, with the results calculated on the cumulative finishing times of the first rider from each age group after the 133km race distance had been completed. 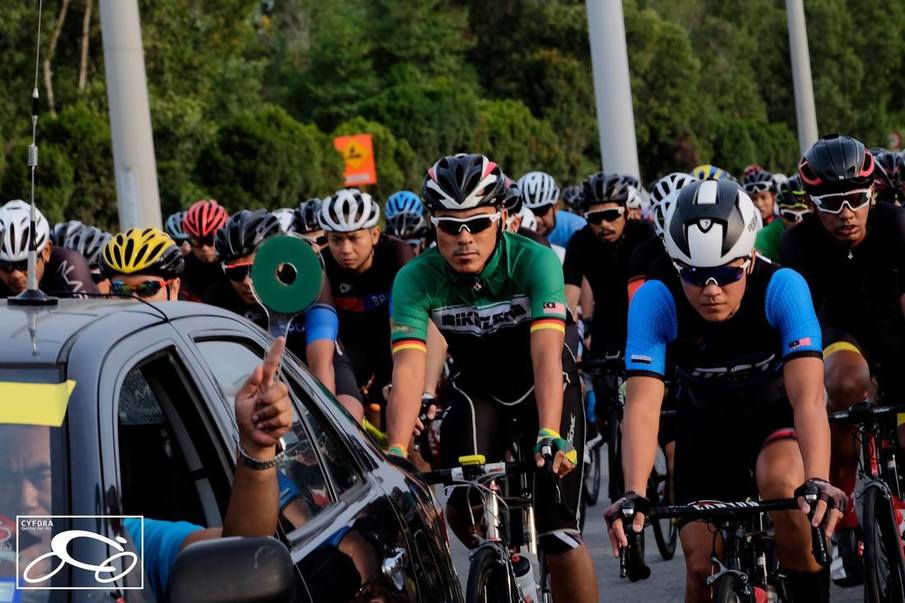 The waiting game
The tech city of Cyberjaya is basically an extension of Malaysia’s federal administrative centre, Putrajaya. Having most of the country’s state infrastructure in a modern, purpose-built city no doubt makes it a lot easier to run things from compared to the urban chaos that is Kuala Lumper, but it also makes for the perfect location for a bike race; the roads are wide and well-surfaced, and the traffic is extremely light.

Traffic probably wouldn’t have been a factor anyway even if the city was more densely populated, as like in many Malaysian bike races that have a good relationship with the local police, a superb system of rolling road closures was in operation for the Cyfora race.

The start/finish area was located in the car park of the impressive Raja Haji Fisabilillah Mosque. The site was bustling 45 minutes before the scheduled 8am flag off as the teams went about their final preparations. Also getting ready was a squadron of 30-40 police motorbike outriders, and those cops did a great job. Many races in Thailand and Indonesia also provide adequate police protection from the traffic, but that often takes the form of the cops hemming the peloton into one lane, while trucks and cars zoom by just inches away. That certainly wasn’t the case on Sunday, as the entire route seemed to be closed to traffic. ​

The 133km course was basically a big loop that headed straight south until it neared the coast around the 50km mark. It then followed the sea northwestwards for 35km before a swing north then east took it back towards the Putrajaya metropolis 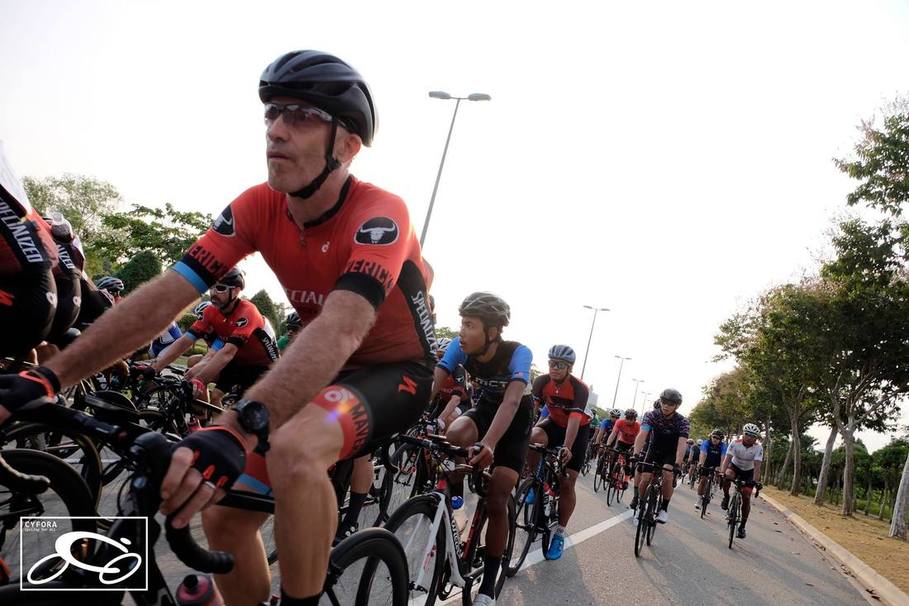 The race photographers captured a closeup of your writer
The racing itself was fast and furious … once it got going. The 20km neutralised section that took the race out of Cyberjaya was painfully slow as the commissaries kept the riders to a strict 25kph for the first 10km, before allowing it to speed up to around 30kph for the next 10km. Of course the result when the flag finally dropped was mayhem as the big bunch finally had an outlet for the huge reservoir of collective adrenalin that had been built up. Those that had cleverly stuck right behind the lead commissaries car for the entire warm-up soon found themselves free falling through the peloton.

The attacks started immediately and didn’t let up until some 90 minutes later when the break of the day finally formed. Before that, a constant stream of would-be escapees shot out of the pack. Some attacks immediately fizzled, while others quickly established sizeable gaps and stayed away for a few kilometres, but with such a flat course and big wide roads, the peloton could easily keep the breakaways in sight and reel them in when it felt like it.​

When the decisive break finally escaped, it kind of happened by accident. A move containing some 10 riders that had been out front for over 5km stared to disintegrate as the bunch finally closed in on it. Once the first few riders had been re-absorbed, the urgency of the chase seemed to dissipate, which had the result of the men at the front of the breakaway never actually being caught. It didn’t take too long for this small group of three or four to turn a tiny gap into a sizeable one, and when they were joined by a few more daring single riders hurtling across, it was game on. Crucially, seven different teams were represented in the break and as this septet started to roll through and work together, it was almost as if the riders in the bunch behind were glad to take a break as the pace noticeably dropped. There was around 55km to go. 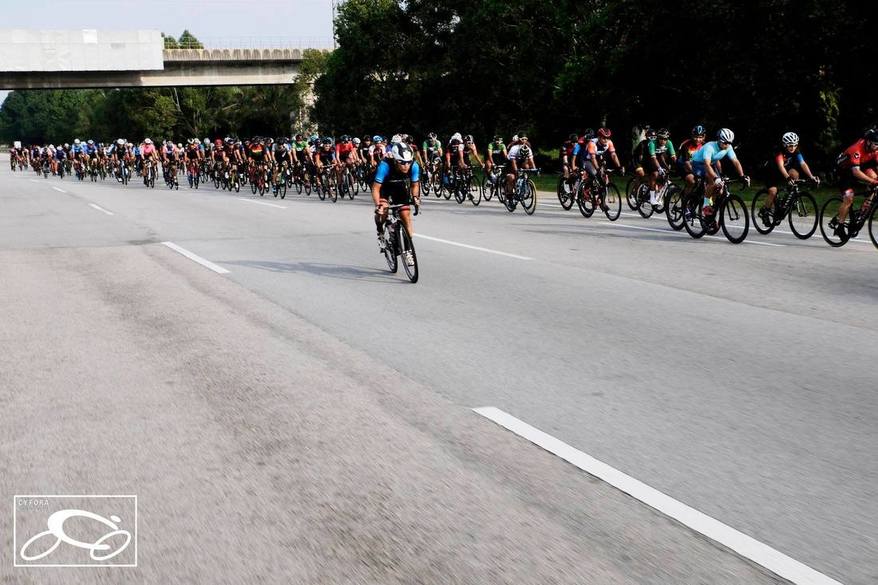 Wide roads made for plenty of attacking opportunities
After a period of consolidation, the chasing did restart but in the form of a series of counter attacks rather than one big collective effort from the peloton, which had the result of allowing the breakaway to gradually increase its gap. Soon it was out of sight.

The pace up front was hard, indeed too hard for some of the glory seekers as first one then another of the seven couldn’t hold the pace and dropped back into no-man’s land before being swallowed by what was still a huge peloton. The size of the big bunch made it quite difficult for those riders given water carrying duties, as dropping back to the team cars for bottles meant the return journey to the front was quite a difficult one. ​

The breakaway had a maximum advantage of some two and a half minutes, but as the kilometres counted down, the main bunch seemed to be reinvigorated and as the speed ratcheted up, the gap to the break began to diminish. With 10km to go there was some belief within the peloton of an unlikely capture, but ultimately that didn’t happen as the remaining five leaders rode hard enough to still have a 40-second gap on the bunch by the time they opened up their sprint.

Hairul Hilmie bin M Rizal (GBN) proved the strongest of the five, the win making it two out of two for the youngster as he also triumphed in the Cyfora Melaka race in April. Hairul didn’t take the glory by much, pipping the runner-up Mohd Shafari bin Abdul Malik (Veloforce) by less than a tenth of a second, with Abdul Halim bin Hassan (Lembek Lutut Cycling) a similar distance behind in third. The official winning time of 2 hours, 41 minutes and 37 seconds didn't include the neutralised start and represented an average speed of 42.4kph.

​The unlucky breakaway riders to miss out on the traditional podium glory in the overall individual stakes were Ben Arnott (Specialized Roval Mavericks) and Aiman Farkhan Mohammad Noor (Army Bvvret Team). They didn’t miss out completely, though, as Arnott won the 45+ age group, while Aiman took the silver medal in the under 25 cat. 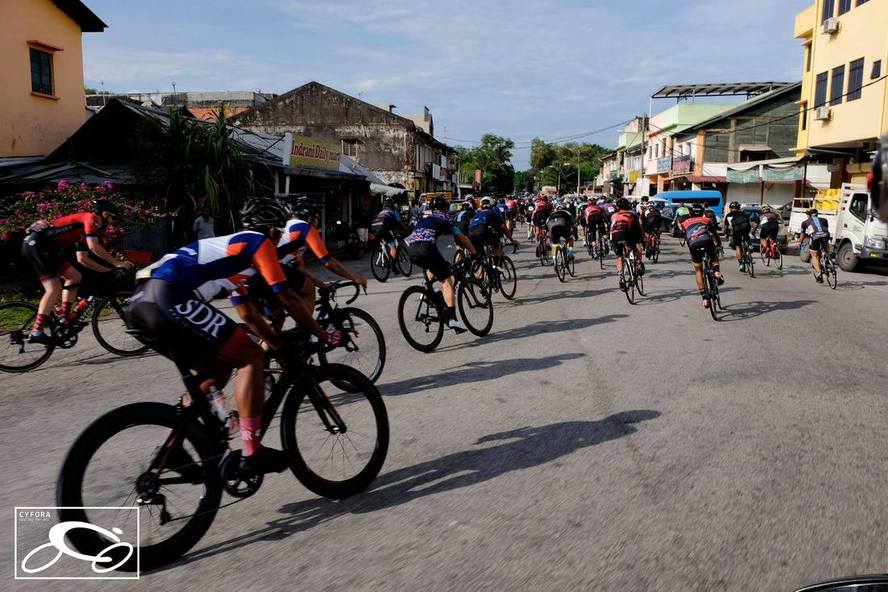 The race made occasional forays into country towns and villages
All was still to play for in the prestigious team competition, and with the peloton still containing some 60+ riders, just about any of the teams could still pull off the win.​

However, with just 3km to go, a big crash on a downhill right-hander split the peloton. A group of 35 riders escaped unscathed and unhindered, leaving the rest frantically trying to chase back on in dribs and drabs. The crash was only the second significant one of the whole race; that's quite an amazing stat considering the size of the bunch and the flat, fast course.

When the dust had settled, it emerged that just 6 seconds had separated the first three teams, with Lembek Lutut Cycling emerging as the champions and the winners of a cheque for 2,000 ringgit (S$700). The Specialized Roval Mavericks were the runners-up, with Veloforce third.

There was a lot more podium action, though, as the individual age group awards were handed out, and just like in many races in Southeast Asia, the Cyfora organisers shared the podium love, with medals being awarded down to fifth place for each of the four age categories. 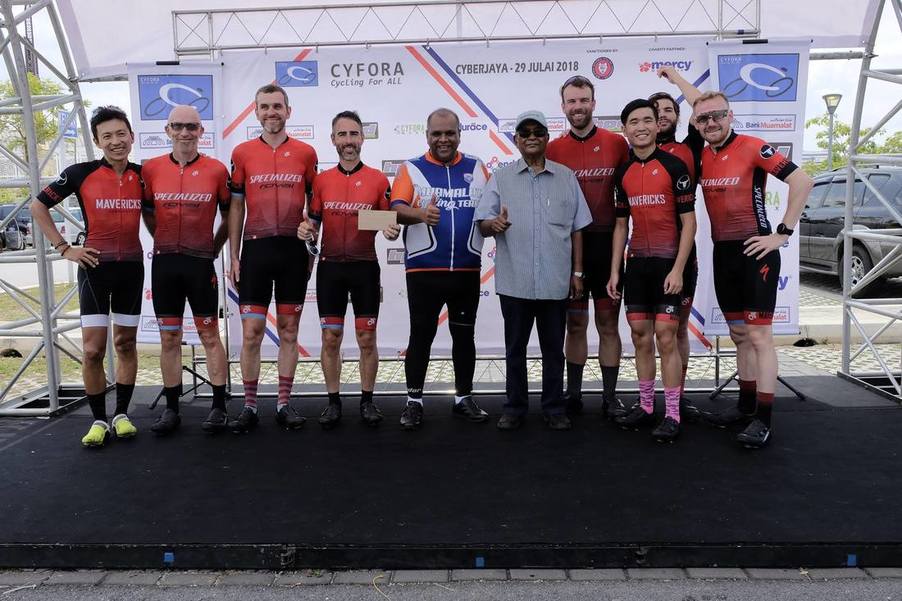 The Specialized Roval Mavericks had a worthy trip north, with second in the team competition, and an age group win and two podiums
The 2018 Cyfora Series ends with the Cyfora Fraser’s Hill on November 25. The race will involve around 110km of distance, culminating in the 40km climb to the famous clocktower at the top of Bukit Fraser. The best way to keep tabs on race details and how to register is the Cyfora Facebook page.

For any Singapore-based teams thinking of heading up for the Fraser’s race, it’s probably worth arranging a team car. The Cyfora team making provisions for teams cars was another sign of how well the event was run, but the Specialized Roval Mavericks didn’t get round to organising that motorised backing, and with the onus on feeding (and spare wheel support) resting primarily with the teams, this meant that most of the Mavs had to make do with just two bidons for the entire 133km!

But the team still had nothing but praise for the race and gave the Cyfora Series a big thumbs up.
​
Photos courtesy of Cyfora.
Proudly powered by Weebly