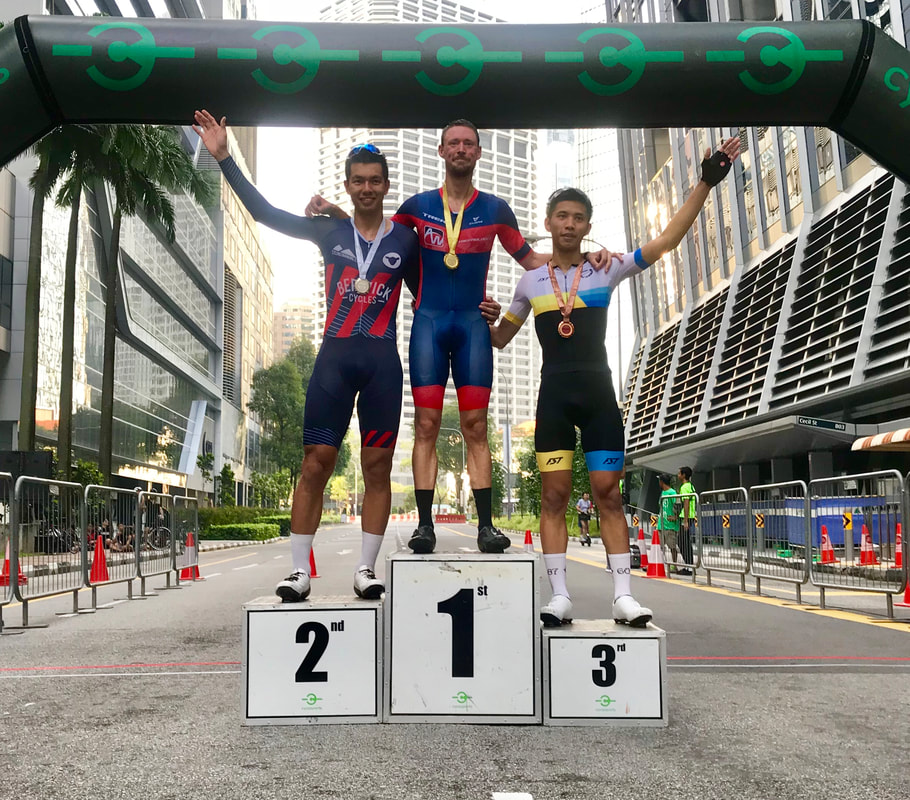 October 28, 2018
The 2018 URA-CFS Share the Road Criterium series concluded today in downtown Singapore with a thriller in the elite Men’s Open contest, which saw Michael Koreneff (Allied World Treknology3) edging Boon Yeo Kiak (CyclingTraining.Asia) by the slimmest of margins. Vicky Goodwin (Anza Cycling) took the Women’s Open title, Winnie Chong (30Forty Cycling Team) won the Women’s Sports race, Pierre-Alain Scherwey (Allied World Treknology3) claimed the Masters crown and Julius Tangit (TWC Racing) was the Junior B champ.
​
In the two year’s since the first test event was run, the URA-CFS Share the Road crits have become a cornerstone of the Singapore road cycling scene, with big crowds of racers and spectators flocking to the 1.7km circuit in the heart of the central business district. This is in despite of the fact that access to the Cecil Street/Robinson Road circuit is only granted for two hours, into which the set-up, three rounds of racing, the presentation and the teardown have to be squeezed into. 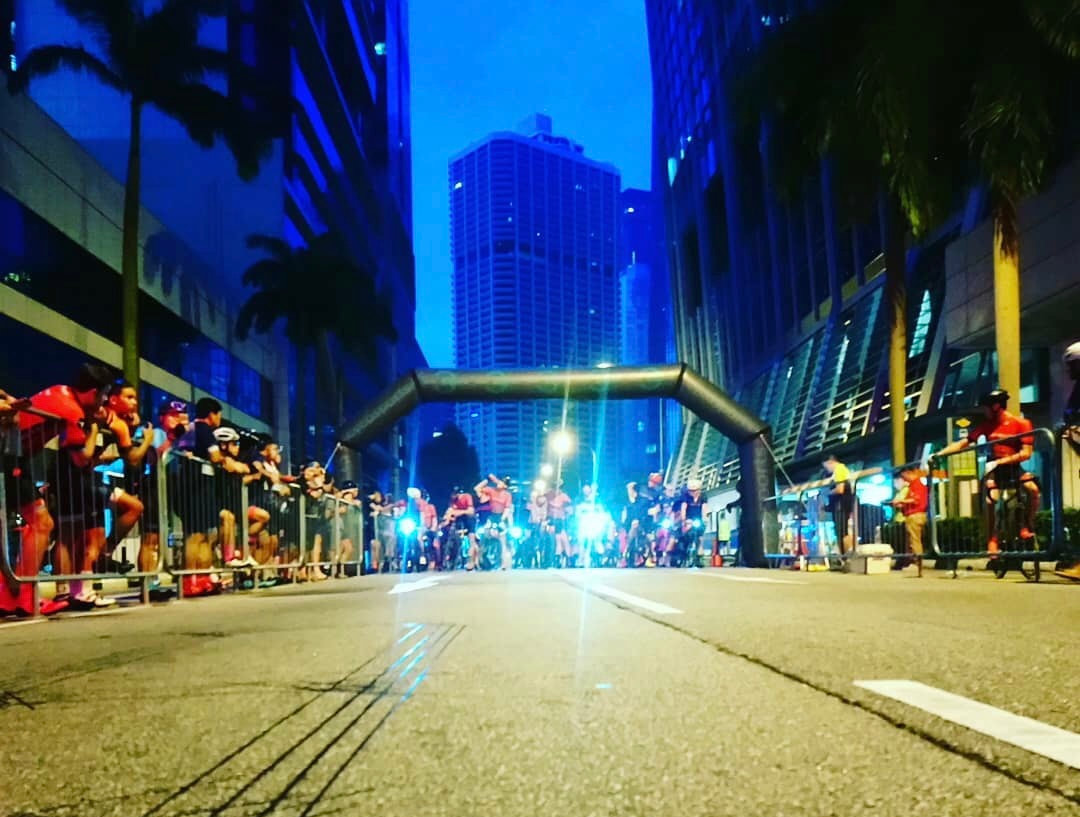 The Masters race started in the gloaming (photo: Sean Hogan)
So huge kudos goes to events outfit Cycosports and the Singapore Cycling Federation for continuing to run the crits, which are a preamble to the Car Free Sunday (CFS) initiative run by the state Urban Redevelopment Authority (URA). Car Free Sunday sees a huge swathe of the CBD closed to vehicular traffic for an entire morning, with the roads turned over to leisure cyclists, runners, rollerbladers and skateboarders. Maybe one of these days the powers-that-be will grant the racing community a little bit more time and a bigger slice of the closed roads to race on, but for now the existing circuit is certainly better than nothing.

One of the official slogans for CFS is “Share the Road”, and it’s in keeping with this concept that the criterium series isn’t just a vehicle for Singapore’s elite racers; throughout the year there have been races for Men’s Open, Masters, Super Masters and Veterans, Women’s Open and Sports, Junior A and Junior B, and the growing community of paracyclists. Unfortunately, due to the time limitations not every category gets to race on each edition of the series (there have been five race dates at the CDB circuit this year, plus another at OneNorth), but this morning five groups got to line up under the Cycosports inflatable gantry.​​ 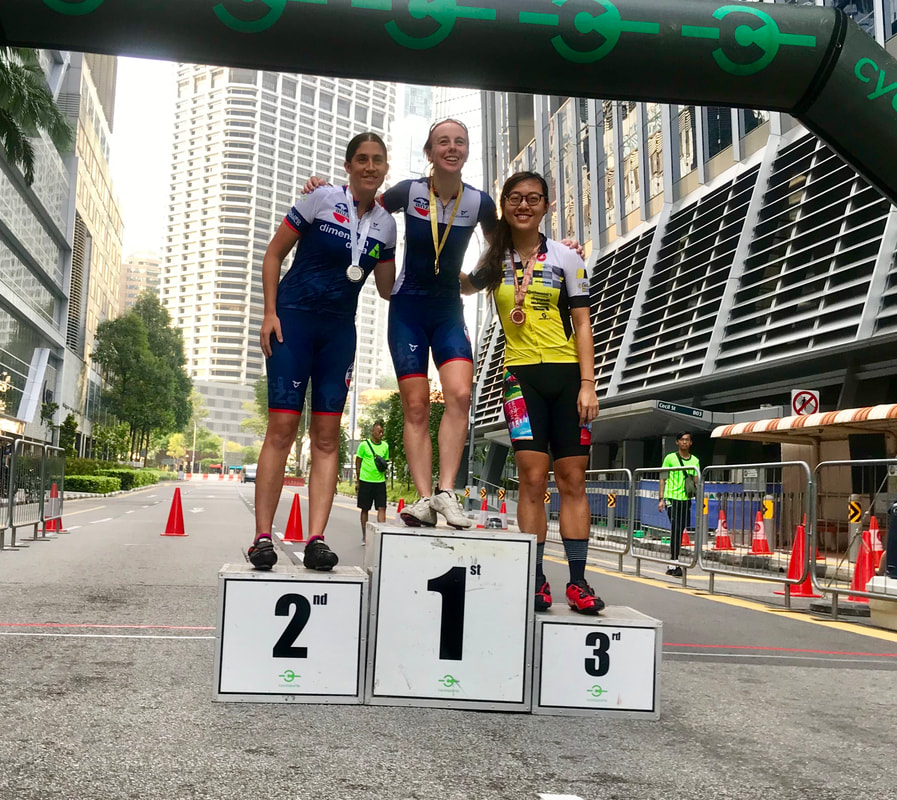 Opening the action in the 6-6:30am slot were small fields of Women’s Open, Women’s Sports and Juniors B, with a gap between each group being set off. The Women’s Open racers were set nine laps of the circuit, which consists of the two long straights of Cecil Street and Robinson Road connected by two turns, neither of which are especially technical. It’s a fast course and the nine women in the open field stayed together for most of the race as they set a rapid but steady pace. Things changed on the bell lap, as the more experienced racers in the field, Goodwin, her Anza teammate Andrea Trindler, and Sarah Tan (NewMoon KHCycle) and Sumiko Tan (30Forty Cycling Team), made their moves down the back straight of Robinson Road and rounded the final turn with gap on the rest. Goodwin proved to the strongest in the sprint, handily beating Trindler, with Sarah Tan in third. Goodwin’s winning time for the 15.3km of action was 23:38.79.

The Women’s Sports competitors faced eight laps and it was another group of four who did battle for podium honours in the sprint. Chong emerged as the winner by less than two tenths of a second from Georgie Grandfield (Fahrenheit Performance Development Team), with Katie Mitchell (Fahrenheit Performance Development Team) edging Michelle Seah (YBCO Racing) for third place. A total of 16 ladies raced yesterday, a heartening number as more and more female cyclists dip their toes into the competitive side of the sport. 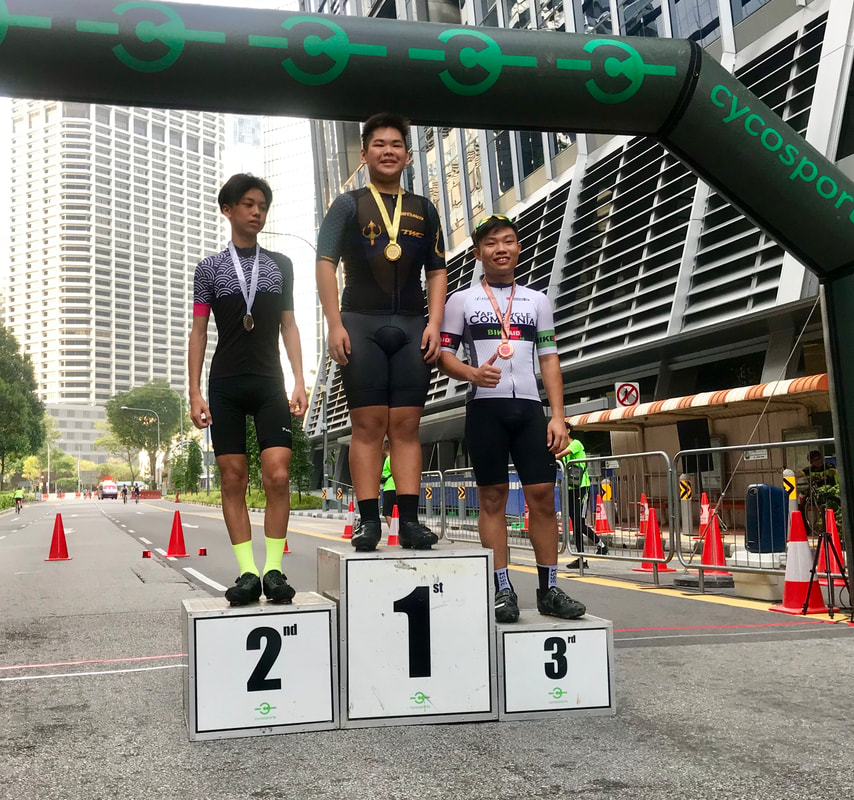 The Junior B boys (aged 13-16) also raced over eight laps and the whole field stayed together for the entire race, with Tangit proving a popular winner, as witnessed by the big cheer the TWC youngster received when he took the sprint from Leoric Heng and Jonathan Tan (YBCO Racing).

Next up in the 6:30-7am slot was the Men’s Masters (aged 35+). With a 40-strong field containing some of Singapore’s best racers, the Masters had the circuit to themselves for their 10 laps of action. A break containing Scherwey and Ben Arnott (Specialized Roval Mavericks) escaped off the front in the early stages of the race and they were never caught. The gap was never huge during the opening few laps as MatadorRacing and 4T2 did a decent job at the front of the peloton. But that state of affairs changed when Guillaume Causse (Allied World Treknology3) bridged across to the leading pair midway through the race.

​​This powerful trio of riders set a ferocious pace and although they never built themselves anywhere near what could be regarded as a comfortable lead, they doggedly stayed out front and refused to be caught. They had only about 10 seconds as they rounded the final turn for the last time but with 200 metres to go they knew then the winner would come from within their small group. The strongest of the three proved to be the big Swiss Scherwey, but only just as he held off Arnott by 0.07 of a second. Casse was comfortably third, with a pair of Mavericks, Trent Illife and Alan Benson, leading the diminished peloton over the line. Scherwey’s winning time of 22:04 represented a quite astonishing average speed of over 45kph. 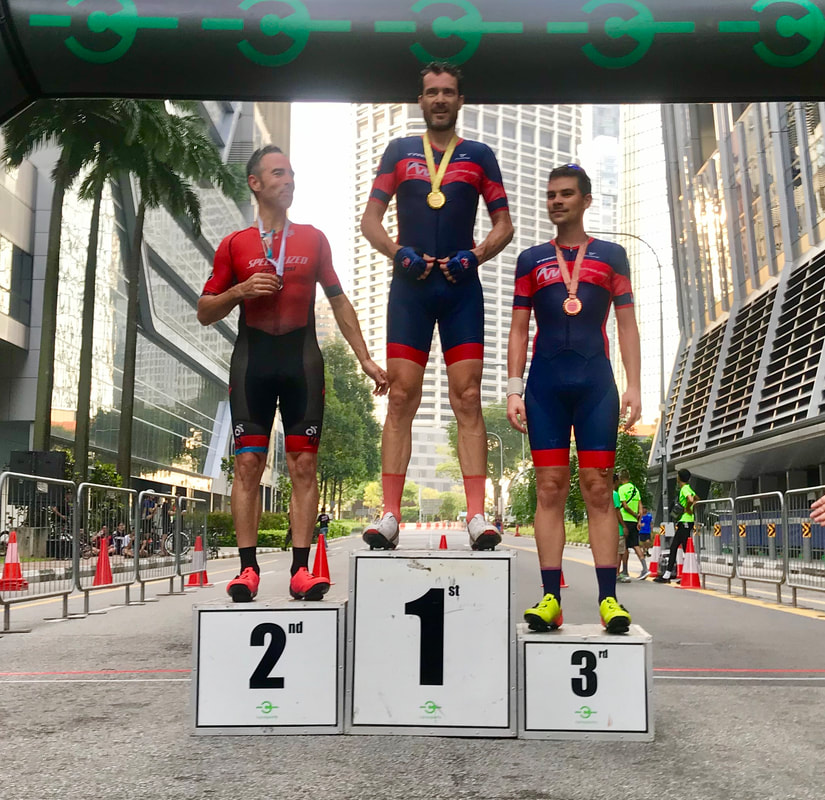 Pierre-Alain Scherwey atop the Masters podium
The honour of closing out the Car Free Sunday crits for the day and the year was fittingly given to the Men’s Open race. Some 50 riders lined up and the sun had even risen to give the elites its blessing for the 7am start. The pace was ballistic from the start and didn’t let up much throughout the 10 laps of action as endless attempts at breaking away were launched and duly brought back in. Indeed, the fact that the peloton had shed nearly half its girth by the time the bell sounded for the last lap tells a story.

Position into the final turn was always going to be key, and it was Koreneff who had the honour of negotiating his way through that battle of bikes and bodies to exit it first, although being right at the front wasn’t necessarily the ideal place. Regardless, the Aussie put his head down and went long, and it looked like the tactic was going to work only for Boon Kiak Yeo (CyclingTraining CC) to come alongside him just metres from the line.

Whoosh
The photo-finish image actually shows that Yeo might have edged momentarily ahead but Koreneff dug deep and found that little bit of extra speed to hit the line first. His winning margin was less than a tyre width, and his winning time was 21:48.04. The first two finished comfortably clear of the third-placed man Ghazzi Krisna (Geylang Cycling Team), while a newcomer to the Singapore racing scene, the Dutchman Nol Van Loon (TSWV de MEET), grabbed fourth by another razor-thin margin from Kelvin Khoo (MatadorRacing).

Koreneff was delighted to get the win.

“Mate, it was so close. The last corner was a mess, everyone came into block, I didn’t know who was sprinting and who wasn’t sprinting, so it opened up in front of me from the second apex and I thought  ‘I’ve got to go, I’m not going to be able to double kick it’, so just went. I went from the corner and just held on, the last 10 metres I had that feeling of ‘are they coming, are they coming?’ and looked to my left and Boon was there and I threw on the line and just got it. It feels good,” he said. 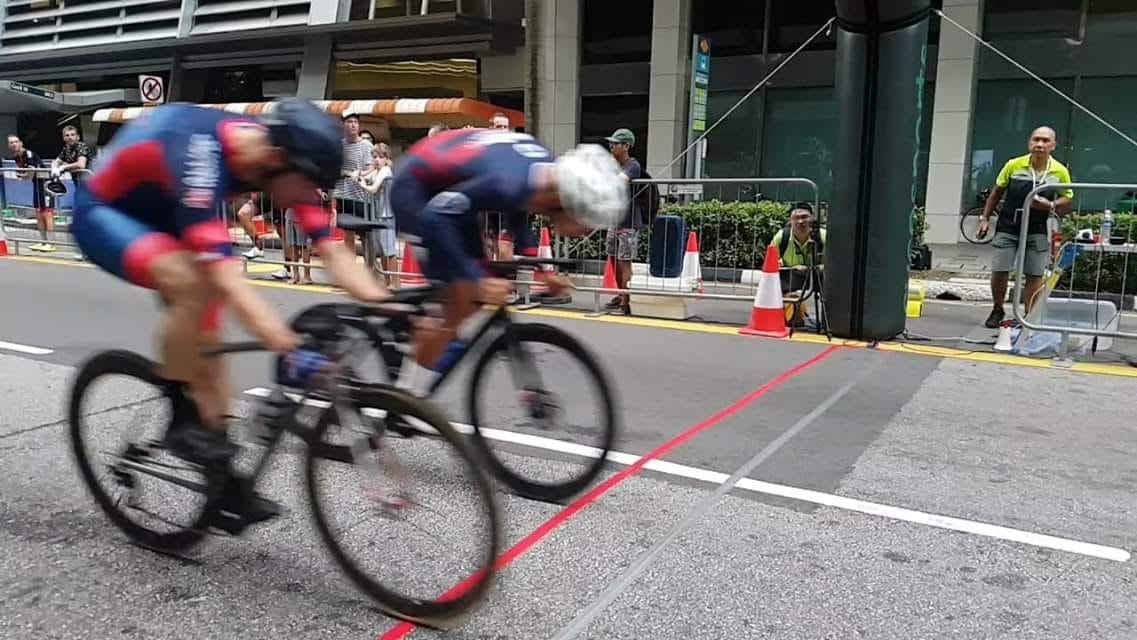 As close as it gets ... Mike Koreneff edges it (photo: Stanley Yeo via Cycosports)
​Koreneff praised the URA-CFS Share the Road series but like many others, he wants more.

“The series is getting stronger, everyone is riding smarter and harder, the race is getting faster. The next step would be to hold more races, we’re at the mercy of the authorities there. Also have a progression in the timing of the categories, to have maybe a B Grade race for 30 or 40 minutes and an A Grade race for 40 minutes or longer just to give a bit of progression for the riders and give them something bigger to aim for,” he said.​

Whether or not the series can expand, either at the downtown circuit or elsewhere, remains to be seen, but even if it retains the current format, Singapore’s roadies will no doubt still flock to take part in the URA-CFS Share the Road criteriums.
Proudly powered by Weebly