Cyclocross is coming to Singapore! 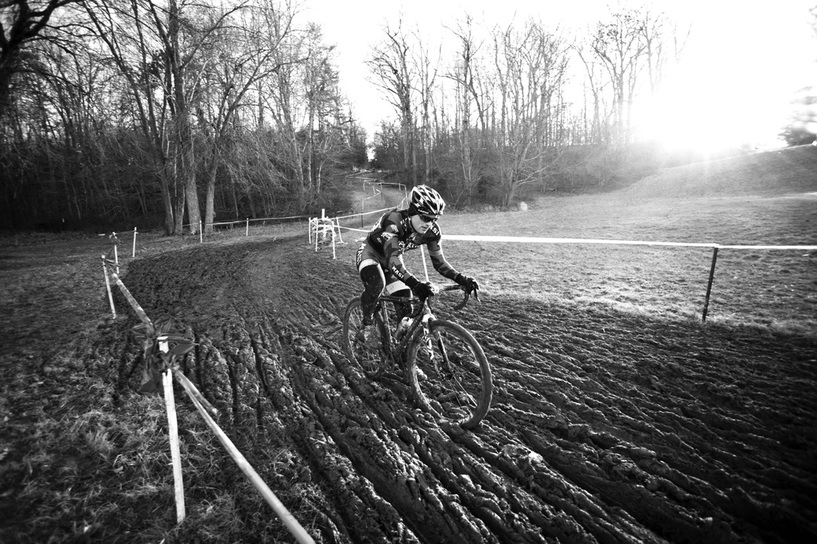 Jungle Cross won’t be as cold as this photo but if it rains heavily it might be as muddy!
Singapore, November 6, 2015
Think cyclocross and images of cold, muddy Belgian mornings spring to mind, not the heat and humidity of the tropics. But think again because cyclocross is coming to Singapore in the shape of Jungle Cross, an exciting new event set for the fields of Turf City on November 10.

While mountain biking is now the undisputed king of off-road cycling, cyclocross has been around for at least half a century longer. Away from its traditional heartlands of Belgian, the Netherlands and northern France, it had, however, only ever enjoyed niche status in most of the cycling world. But largely due to a resurgence in the United States, where it now has a fanatical following, cyclocross has enjoyed an explosion in popularity over the past decade.

And so the decidedly winter discipline of cyclocross has somehow made its way to the shores of tropical Singapore. And why not? It’s actually surprising that nobody’s thought about it before. Singapore has rain and mud in spades and surely it’s got to be more fun riding around an off-road obstacle course when it’s not cold and miserable.

Recognising that there aren’t yet a huge number of cyclocross aficionados in Singapore, the people behind Jungle Cross (the rugby-focused Centaurs Group and cycling events outfit Cycosports) have decided to open the first of what they hope will become a series of cyclocross events to mountain bikes. And there won’t be separate categories, it’ll be a mash-up between cross bikes and mountain bikes, giving an extra dimension of intrigue to what already promises to be an eye-opening morning of action for most of the participants. 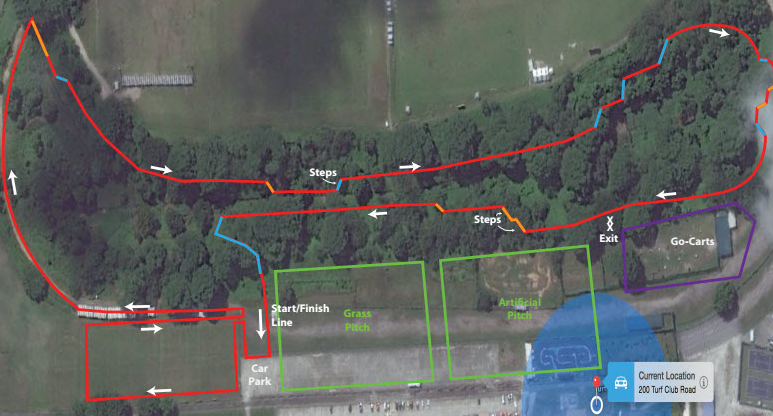 “We would love to have a cyclocross-specific event in the future, but at this stage we are not sure of the demand, so we need to keep the event viable for all. Perhaps in Jungle Cross II we can look for a standalone cyclocross category – and maybe even a category for fat bikes!” McCallum says.
Throwing the cyclocross and mountain bikes in together makes some sense as there is an obvious synergy between the disciplines in that they both take place off-road, but there is also one glaring difference … the bikes.

Cyclocross bikes look like road bikes and a few key differences aside, are indeed road bikes. The most notable modification is the tyres. While the 700cc wheels are the same, in order to gain traction on the grass, dirt, mud, sand and snow-covered terrain that cyclocross races are typically staged on, wider and heavily treaded tyres are required. Traditional road bike tyres are 23mm to 25mm wide, but cyclocross tyres start at 32mm and go all the way up to 42mm. Like with mountain bikes tyres, different treads are available to suit a variety of conditions. Other similarities between the two off-road disciplines are low tyre pressures and the dominance of disc brakes, which provide better and more consistent stopping performance under all conditions.

But those thicker tyres on the cross bikes begat the next difference between them and traditional road bikes – the need for greater wheel clearance. Most road bikes will struggle to fit even a 28mm tyre between the front forks, with the same problem applying to the rear triangle. 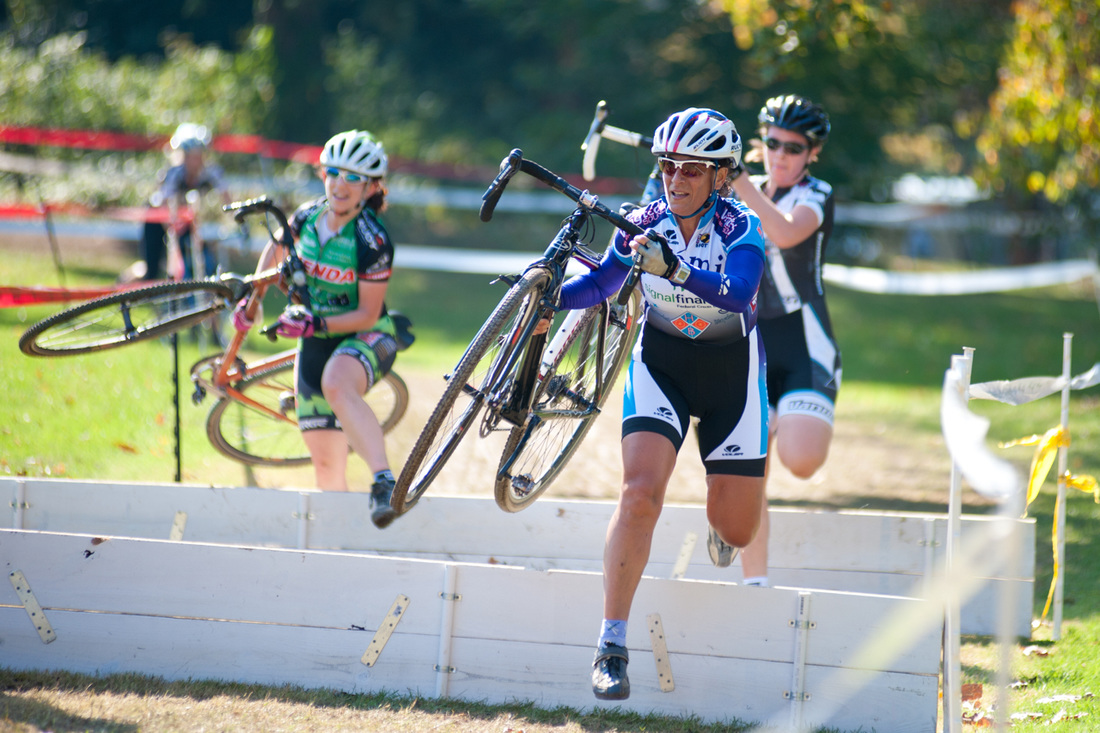 Dismounting and running is often the only option in cyclocross races
So different fork and frame geometry is required to allow for the bigger tyre clearance, and cross bikes have also traditionally featured a higher bottom bracket than road bikes, to provide for more clearance from obstacles.

Another cosmetic difference is often with the cabling. While many modern cross bikes will have internal cable routing, for those that don’t, the shifting and rear brakes cables will typically run along the top of the top tube. This is to facilitate the thing that makes cyclocross unique from both road and MTB racing – the need for riders to frequently dismount and carry their bikes over their shoulders while running up a hill, through a sandpit or over a strategically placed plank of wood.

Cyclocross races tend to last between 30 minutes and an hour, and take place on short circuits, about 2km-3km in length; an off-road criterium is a good description. The ground will typically be smoother than for a cross-country mountain bike race as the cross bikes can’t take the same abuse as the MTBs. Cross courses will also be quite technical in places and will feature some short, sharp hills and a few man-made obstacles, which is where the dismounting comes in. 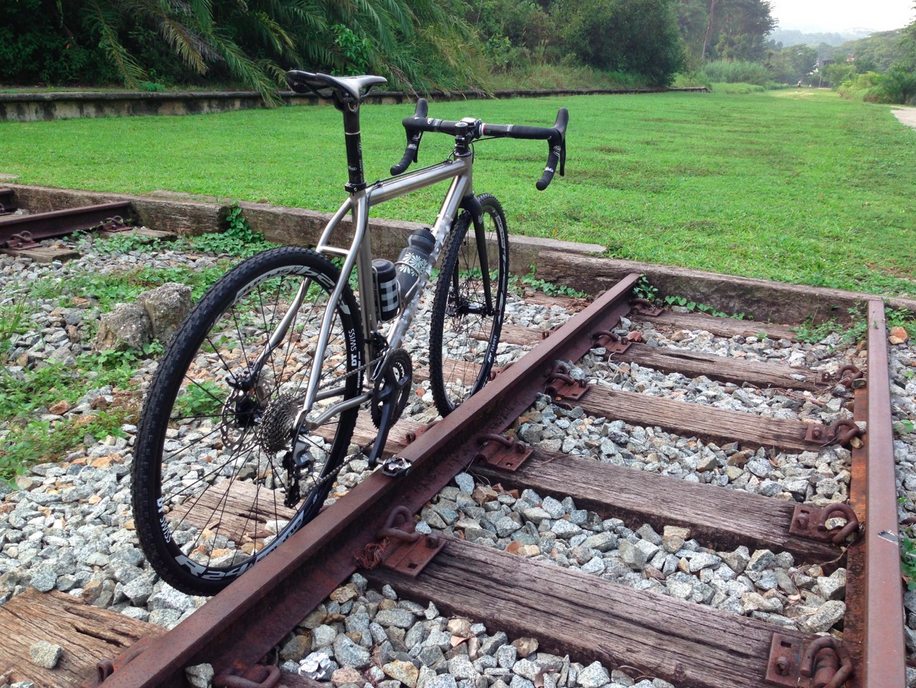 The Green Corridor down the old KTM railway track in Singapore is a great stretch of ground to practice cyclocross skills
The requirement to run with the bike could be the key to whether the Jungle Cross course will be more suitable to the cross bikes or mountain bikes.

MTBs will have an advantage on the rougher sections as their wider tyres and suspension systems will allow them to ride over some obstacles that might be too much for a cross bike, but carrying a heavier mountain bike up a hill and over a barrier will place more of a physical strain on the MTB riders.

The circuit for the Jungle Cross race is about 2km long and goes in, out and around of The Pit, a small ravine in the middle of Turf City, adjacent to the Centaurs rugby fields. It’s more used to staging obstacle-course-themed birthday parties than bike races.
Cycosports’ McCallum describes the course as “challenging.”

“It’s tight but fair. It has everything within a 2km loop – flat fields, drop-offs, jumps, hard sharp climbs, logs and of course some cyclo-cross barriers. And if we get lots of rain before the event, it will be very interesting indeed,” he says.

We asked McCallum where the idea to stage a cyclocross race came from.

“Tim Lambert, the man behind the Centaurs Group actually came to us after discussions with local cyclocross enthusiast, Arnold Yeo. Together the idea for the Jungle Cross was developed and launched,” he said.

Cycosports is better known for staging its very popular road races in Malaysia, Batam and Bintan, but McCallum senses an opportunity with the Jungle Cross concept.

“It’s virtually impossible to organise a road race here in Singapore so the next best thing is to develop the cyclocross market. Worldwide the market is expanding and it is becoming mainstream in many countries,” he says.

With many Singapore bike shops stocking cyclocross bikes now and the sport getting more and more exposure across all the cycling media platforms, there is every chance that the discipline will thrive in the Lion City. A good turnout for Jungle Cross, which takes place on the Deepavali public holiday, would be a great head start.

“Come down and enjoy a great morning,” says McCallum. “The event has multiple categories as well as free kids races. There will be food stalls, a barista and RedBull will be there in force with free drinks for all.”

Three competitive races (basically a self-seeded Cat 1, Cat 2 and Cat 3) take up the first part of the morning, before the course is opened up for an hour for those curious about cyclocross but not confident enough to race.

It promises to be a great day for the Singapore cycling community, bringing CX lovers, roadies and mountain bikers together.

Visit here for full information about Jungle Cross and to register. Limited race-days entries will also be available.

(This article first appeared on www.cycleasia.com)