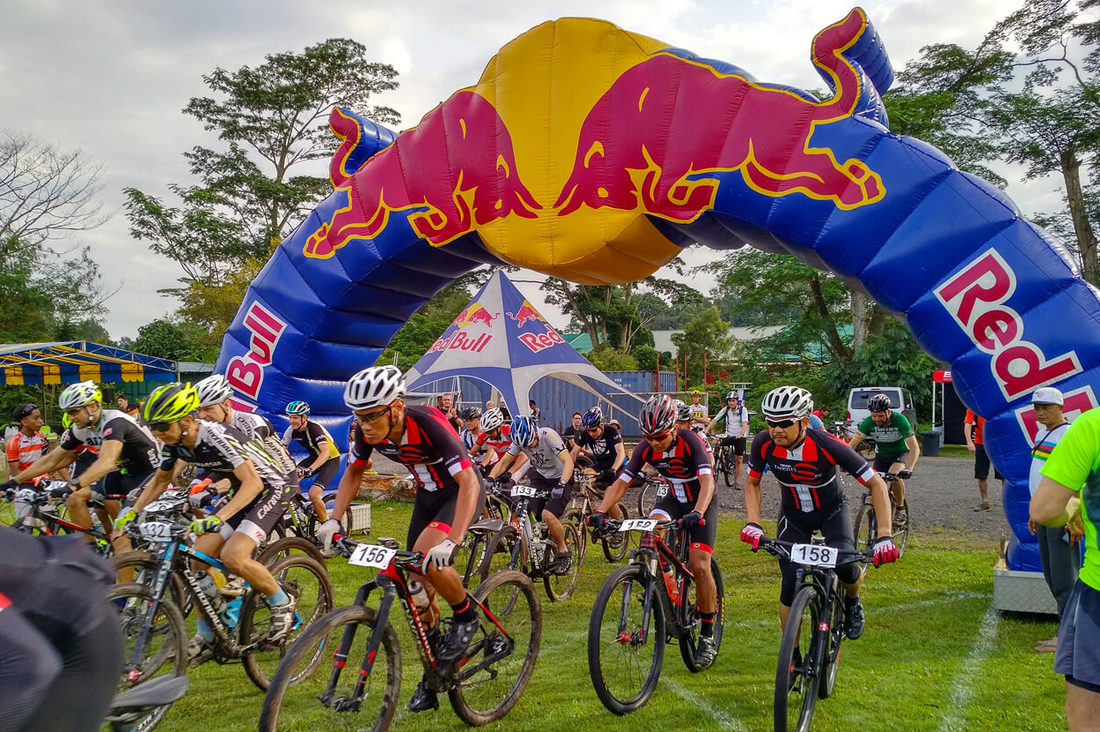 Singapore,
February 6, 2016
After a successful test event last November, the Cycosports Jungle Cross returned to the punishing Centaurs Jungle Trail in Turf City on Sunday, with four exciting races providing a tough challenge for the mud-loving riders and outstanding entertainment for the spectators.

The first in what is planned to be five-date, year-long series built on the success of the test event and introduced some modifications that made Jungle Cross bigger and better.

Chief among the changes was the decision to hold a separate contest for the cyclocross bikes, rather than lump them into together with the mountain bikes as was the case for the inaugural event. This not only produced a level playing field, it also allowed for the introduction of some traditional cyclocross barriers for the CX race. 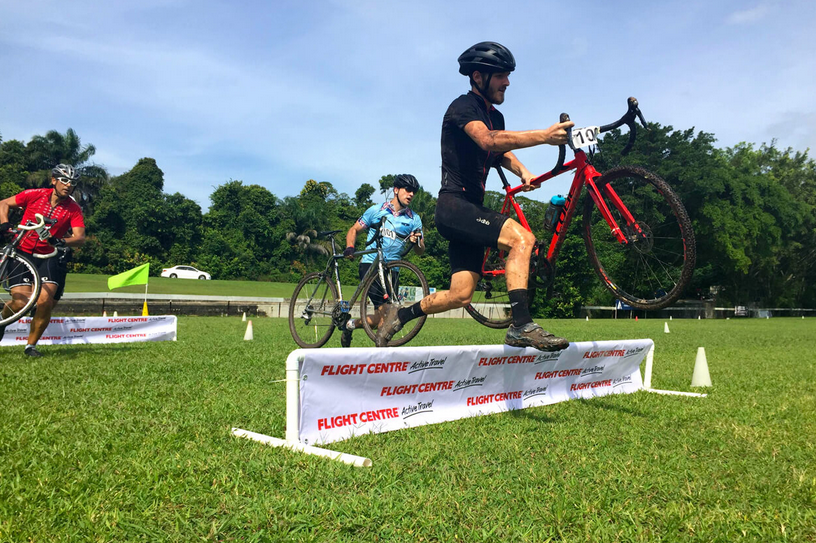 The cyclocross barriers force riders to dismount and add a lot of fun
The action opened just before 8pm with the Elite mountain bike race. The riders faced seven laps of the roughly 2km-circuit, which after following the perimeter of the grass playing fields at the Centaurs Sports Park, dropped into The Pit, a gully slap bang in the middle of the Turf City complex filled with tropical vegetation that gives Jungle Cross its name.

This fairly fast but also quite technical jungle section of the course has a bit of everything: a series of short, sharp inclines and descents, gnarly sections of roots, logs, a jump and lots and lots of mud. Each lap finishes with a steep slope where the spectators throng for the spectacle it offers; they cheer the few riders who make it all the way to the top, but mostly their encouragement is for the vast majority forced to push or carry their bikes up the hill.

The Elite contest quickly settled into a two-man race between the Team Harding duo of Mohd Razif Mohd Salleh and Mohd Lutfi Arrifin, the latter being the winner of the Jungle Cross test event. Ariffin flew round the first lap, cresting the hill onto the flat grass fields some 10 seconds ahead of Salleh and Junaidi bin Hashim (Team 29’er), with Ivan Tay (Cannasia) also in contention. Lap 2 saw the Harding pair virtually level and with some separation from the rest, but by the end of Lap 3, Salleh had edged ahead of his teammate and from there gradually increased his lead over the remaining circuits. He finished in a winning time of 47:09, some 30 seconds ahead of Arrifin, but behind them a fascinating battle for the final podium place was going on between Junaidi, Tay and Anthony Brown (Cannasia). Tay proved the strongest in that sub-contest, but only by four seconds from Junaidi.
Teoh tore out of the gates and had built a sizeable lead even before reaching the two pairs of cyclocross barriers erected in front of the pit-lane area. He impressed the crowd with his display of textbook dismounting and positively wowed them with his flying style of getting back on the bike.

Teoh also had the strength to battle the elements in the jungle and emerged out of the Pit with a 45-second lead over Noah Gellner (Anza Cycling), another man with cyclocross experience. But Teoh put in consistently fast laps and was never troubled, covering the four laps in a time of 35:37 for a mightily impressive seven-minute victory. Gellner had looked safe for the runner’s-up spot for most of the race, but a flying final lap from Raoul Berthillon (Allied World CCN) saw him overhaul the Anza man just before the end to take second place. Gellner still stood on the podium, finishing well clear of the fourth-placed man. 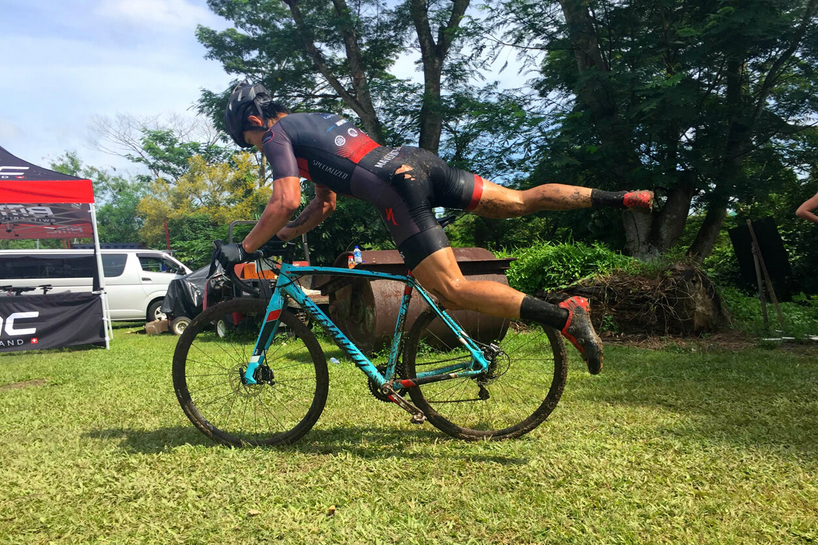 Cyclocross winner Teoh showing the rest how to get back on his bike.
Competition over, all that was left for the contestants and Cycosports/Centaurs race crew to do was relax, recover and enjoy the wares of sponsors RedBull, Pure (electrolyte drinks) and Gaest (gourmet coffee and bakeries). The chance to partake in a cyclocross tradition of a beer or two was provided courtesy of the good people from Team Chilli Dumpling, who even lit a barbeque and cooked up some steak sandwiches.  Special mentions also to Rapha and Muc-Off for providing the podium prizes.

Jungle Cross will be back to the Centaurs Jungle Trail on April 26 for round two of the series. With the first official race such a resounding success, Jungle Cross is primed to earn itself a prominent place in the Singapore cycling calendar.