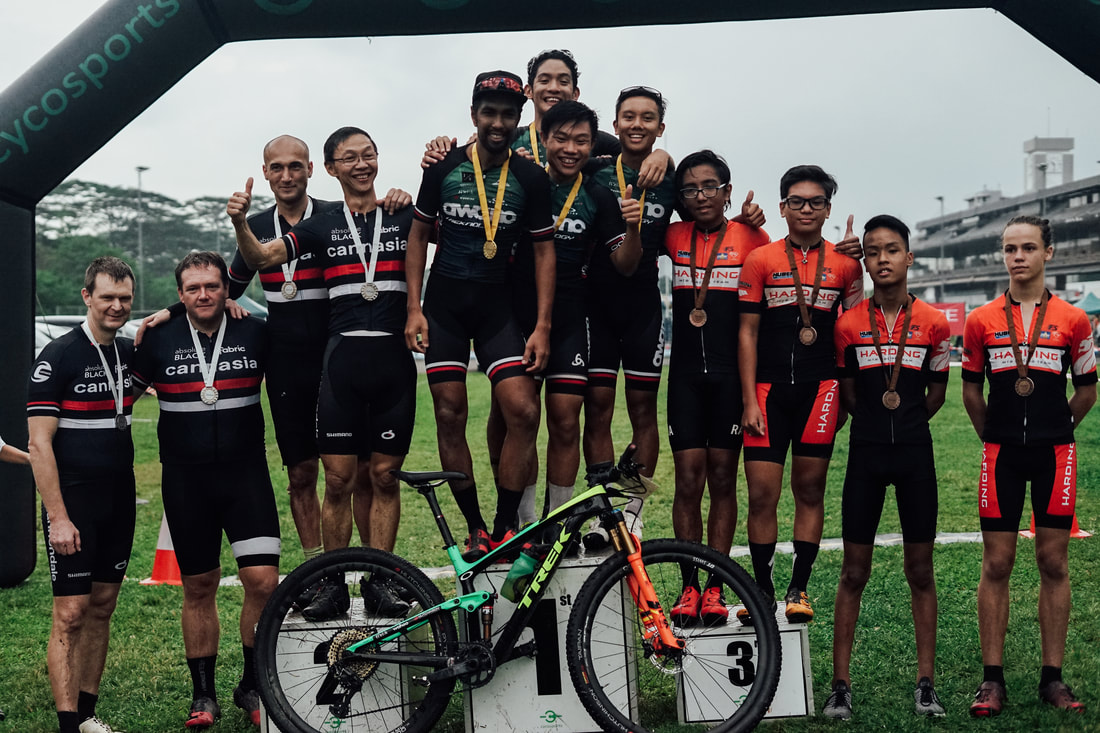 November 17, 2019
The 2019 Singapore racing calendar came to a close yesterday with the fourth and final leg of this year’s Cycosports Jungle Cross series at the Centaurs Sports Park, and it was a real celebration of what is a vibrant local off-road scene inhabited by a diverse and inclusive community of riders.

The format for the finale wasn’t the usual string of short and sharp individual cross-country races, instead Cycosports decided to put on an extravaganza of endurance and camaraderie, tasking the local mountain bikers to team up with their friends and ride round the ever-improving and ever-growing Jungle Cross trail as many times as they could within a three-and-a-half hour window. The vast majority of the MTB participants raced in teams of four or two, but there was also an individual category for the hardcore or simply crazy. The cyclocross community wasn’t left out either, with the rigid-fork, drop-bar riders given an hour of racing on a modified circuit. And in their latest innovation, the folks at Cycosports closed out the program with a series of thrilling twilight grass-track criteriums. 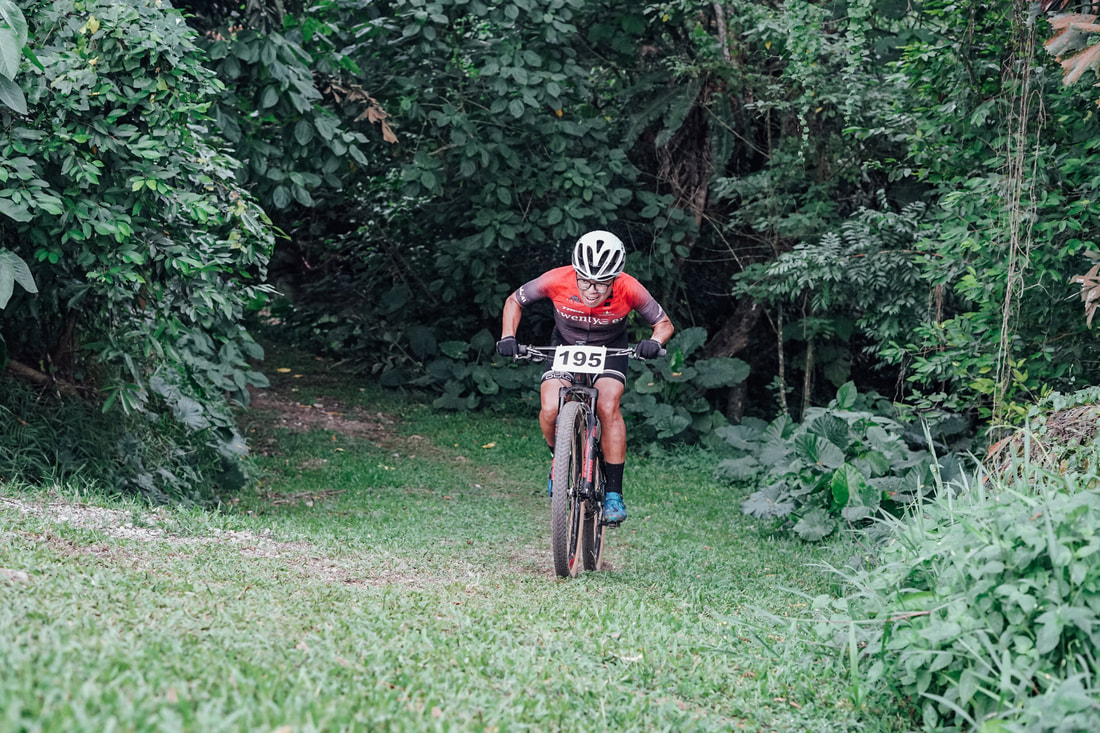 ​In addition to having a superb mountain biking trail carved out of the ravine at the Centaurs Sports Park, the other main feature which makes the venue perfect for mountain bike racing is the long row of permanent tenting which stretches along the entire length of the playing-field portion of the race course. This spacious facility provides shelter from the elements but can also act as a perfect party zone.  And so with only one member of each team allowed on the jungle track at any time yesterday, the sideline was jam-packed with racers, family and friends all afternoon and into the evening. A real festive vibe prevailed throughout, with BBQs fired up and giant ice boxes filled with drinks. While the endless grilled food was appreciated, the cold drinks were essential as yesterday was a real scorcher.

Instead of the usual Jungle Cross Sunday morning program, yesterday’s event was a Saturday afternoon affair and the action didn’t start until 2pm. The mountain bike quad field set off first, followed five minutes later by the pairs, with the individual riders going off last of the MTBers. The trail was in superb condition thanks to a nice mix of mostly dry weather with occasional rainy days in the weeks leading up to the race.

The quads were tasked with riding the full three and a half hours, the pairs had three hours on course and the individuals raced over two and half hours. If a team/individual made it over the start/finish line within a second of the time allocation for each category, they were allowed to do another lap. 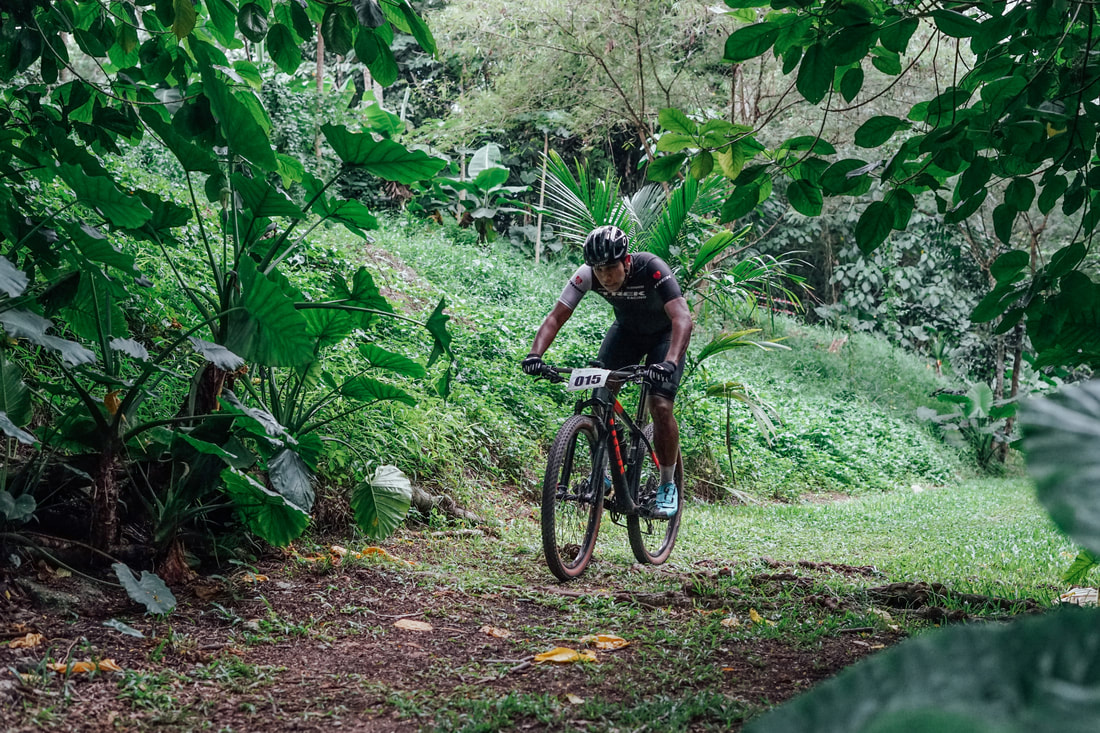 With so many riders on track at the same time and all racing in different categories, it became difficult for those on the sidelines to work out the state of affairs, but who was winning what wasn’t really the point of yesterday’s gala event, the emphasis was on just being there to celebrate another successful, whether that was participating, supporting or spectating.

Of course a race is a race, and a fair portion of the participants were out there chasing podium honours in addition to having a good time. In the Men’s Open Quad race, the much-heralded Team Awano squad led from start to finish. They were pushed early on by CyclingTraining.cc and Team Harding, but over such a long race, class usually ends up prevailing and the Awano four of Junaidi Hashim, Riyadh Hakim, Ahmad Safiy and Jonathan Tan were easy winners, completing 15 laps of the almost 4km circuit in a time of 3 hours, 45 minutes and 11 seconds. The runners-up were the Cannasia four who managed 13 laps, with the teenage Team Harding foursome finishing third having also recorded 13 laps, but two minutes down on the more experienced Cannasia squad.

The Mixed Open Quad title went to the Anza Cycling Swanza team, the quartet of Phliip Routley, Ben Howells, Roger Allingham and Andrea Trindler also putting in 13 laps on their way to victory over the Singapore Bike Hash. 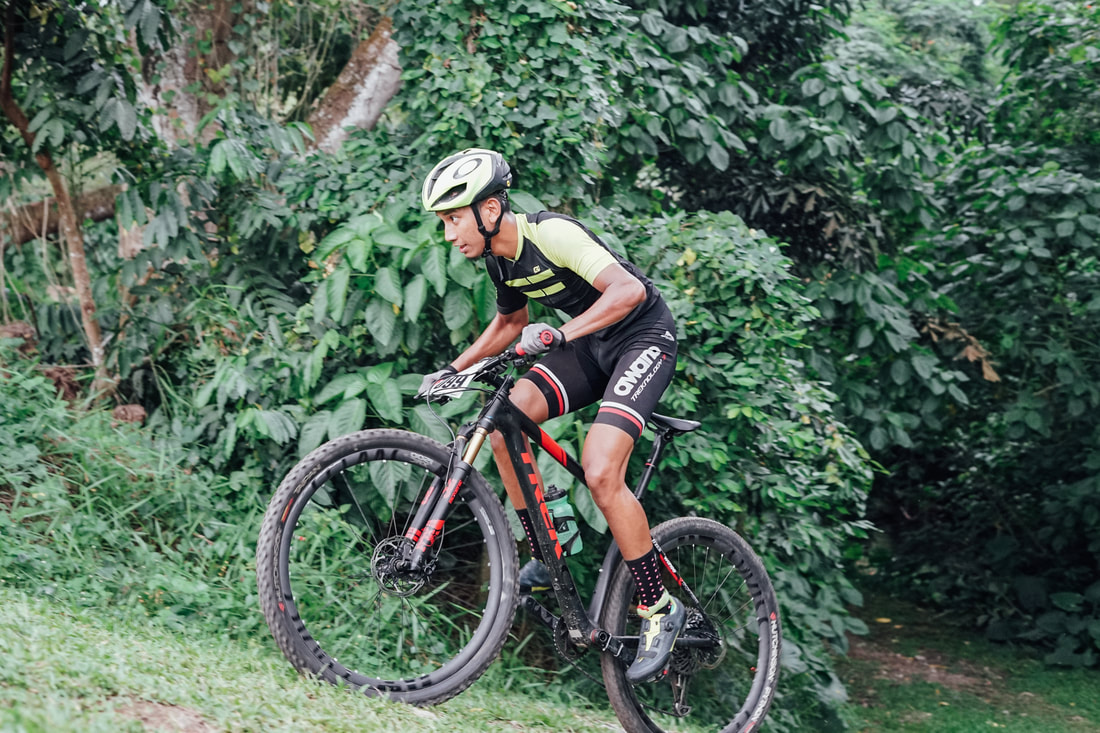 ​The Men’s Open Duo almost saw another wire-to-wire victory for Team Awano. The pair of Arfan Faisal and Aidil Taufid Afendi were still runaway winners with 13 laps completed in a time of 3:04:36, but they weren’t fastest on the first lap, that honour going to the Swiss Club 2 team, who ultimately finished in second place, but a lap down on the winners. The final step on the Men’s Open Duo podium went to the Cannasia Young Lads 113 pairing.

The Mixed Duo crown went to the Integrated Riding Hughes team (Wes Hughes and Emma Hughes) who put in 10 laps on their way to glory. The runners-up Team Trial + also recorded 10 laps but they were a few minutes slower.

The Individual Open win went to none other than the runaway 2019 Jungle Cross series winner Anthony Brown (Cannasia). The big fella put in a wire-to-wire masterclass, lapping the whole field bar the second-placed man David Strooper (Matador Racing). Brown completed a gruelling 10 laps of the course in a time of 2:30:10, which gave him a huge winning margin of 14 minutes. Rik Oberoi (Matador Racing) rounded out the podium in third, a few minutes down from his teammate. A special mention to Esther Koh who was the only women to enter the individual race. She completed eight laps of the course.

The Cyclocross Open endurance racers weren’t given quite the same length of time on the course as the mountain bikers, but their contest at roughly one hour in length on a shortened course was still double what they were used to at Jungle Cross. Andrew Fang (Revolution) led the charge on the first of eight laps the leading riders completed, but he was closely shadowed by the indomitable duo of Bastian Dohling (Specialized Roval Mavericks) and Pierre-Alain Scherwey (Allied World Treknology). Fang faded a bit on lap #2 leaving Dohling and Scherwey to battle it out toe to toe for the first half of the race. Dohling eventually got away on lap #5, though, and went on to take the win by just under a minute from the big Swiss. Fang finished about the same margin back in third. 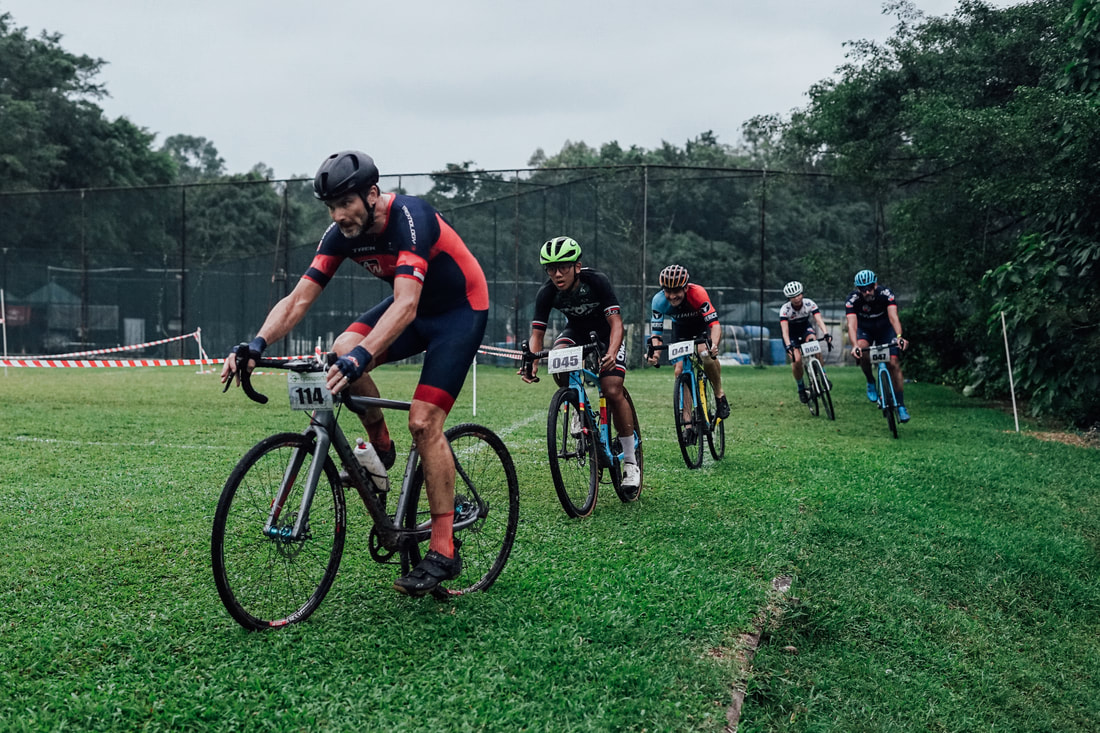 ​That would normally be it for Jungle Cross racing, but for the 2019 year-end grand finale/party Cycosports came up with that idea of adding some fun criterium racing on the grass playing fields. There was something for everyone, with separate contests for cyclocross bikes, mountain bikes and even road bikes. The kids too got in on the action, being allowed short spells on the track in between the rounds of adult action.  The format was 20 minutes plus three laps around one of two oval circuits that were set up on the fields, one inside the other, which allowed two races to run concurrently. The outer loop was about 400 metres in length, with the inner loop slightly shorter.

This concept proved to be a big success, as there was still a big crowd present under the tentage eating BBQ and downing cold drinks and they got to witness a great show … at least for the first two rounds of action. Alas, by time the MTB and Road Bike contests got under way, it was almost pitch black, due to a slight overrun on the schedule and the non-appearance of some lights. Still, the two sets of racers went out onto the slippery grass and completed their laps to the acclaim of the still-sizeable crowd still present. For the roadies especially and their slick tyres it was an unforgettable experience. Let’s hope Cycosports repeats the criterium experiment but maybe hold it in the daylight next time. 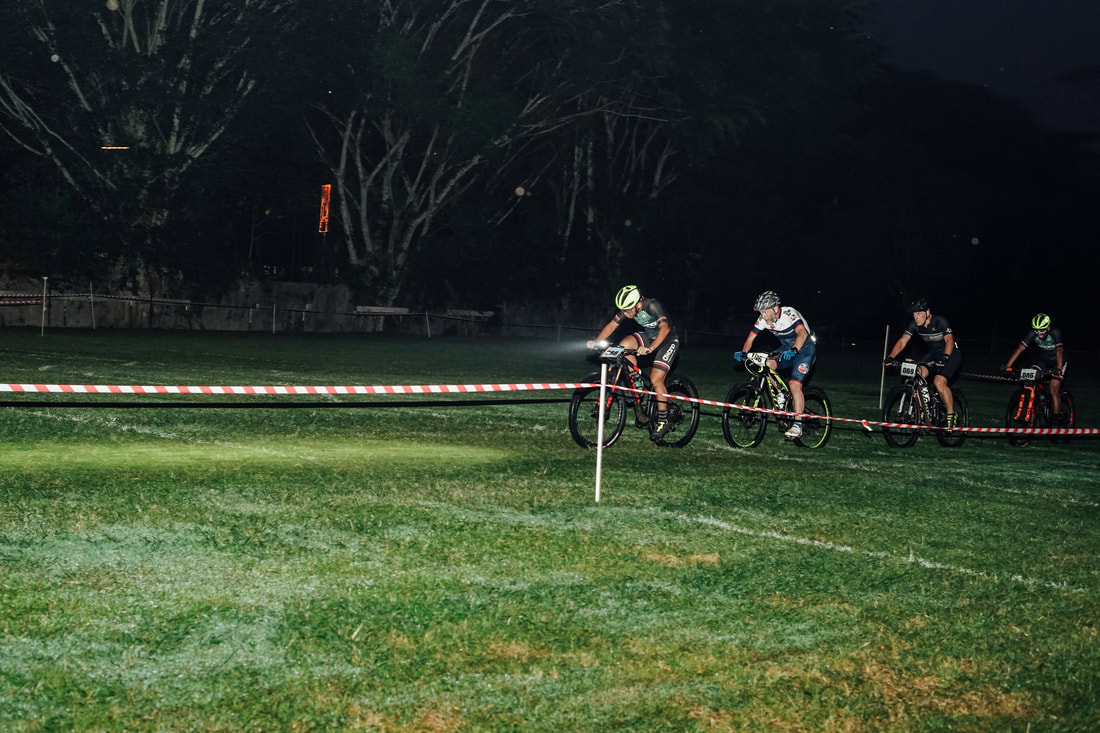 With the crits complete last night, the cyclists, friends, families and supporters started to drift away homewards, but the Cycosports team and volunteers were there for a while longer taking down the event infrastructure and tidying up the scene. Jungle Cross at the Centaurs Sports Park has become so synonymous with local off-road bike racing in the four short years since the inaugural test event in November 2015, that it’s hard to imagine what the state of mountain biking affairs would be without it and Cycosports. The Singapore Cycling Federation, the SCF commissaries, and the local clubs and teams contribute to the ongoing success of Jungle Cross but the biggest praise has to go to Kent McCallum and Co at Cycosports.

So here’s to the 2020 Jungle Cross series, which will no doubt be held on an even longer and better course as the circuit continues to evolve. Results from yesterday’s endurance races can be found by clicking on this link.

All photos courtesy of Haiqal/Cycosports.
Proudly powered by Weebly