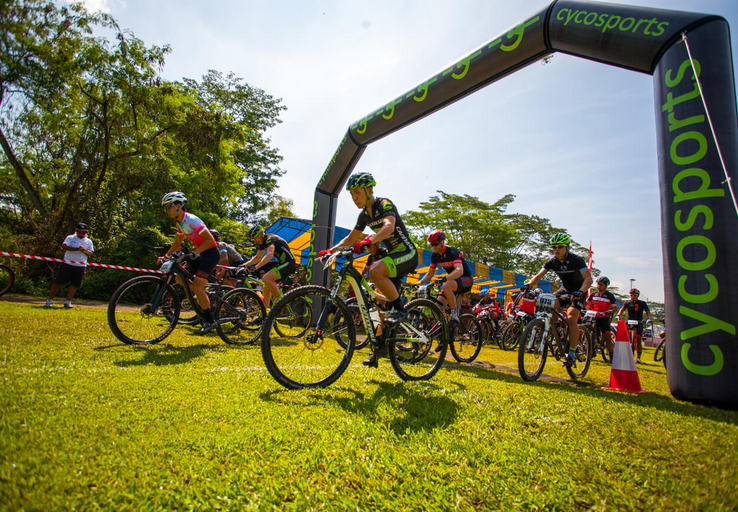 10 April, 2017
The second edition of the 2017 Cycosports Jungle Cross series saw some tweaks to the race organisation but the end result was oh so familiar as Junaidi bin Hashim (Team Awano Treknology) staged another superb performance to bag the Men’s Open MTB title yesterday.

A glorious morning greeted Singapore’s off-road specialists as they made their way to Turf City and the Centaurs Sports Park that is home to Jungle Cross. On arrival, they were greeted with a modified set-up, which saw the start/finish line moved to run parallel with the permanent marquees that stand between the playing field section of the course and the Pit, the small but densely wooded ravine that gives Jungle Cross its name.

The small modification didn’t change much for the competitors, but on what was a sweltering morning, it enhanced the experience for the spectators as it gave the big crowd of family and friends a wider view of the action without having to step out of the shelter.

By the time the combined Men’s Open/Masters fields lined up for their race at 10:50 am, the sun was at its hottest and the course was at its toughest, having already borne the brunt of the two rounds of racing; the Cyclocross Open, Sports MTB and Juniors B MTB kicked the program off at 8 am, while the Super Masters MTB, Women’s Open MTB, Fat Bike and All Mountain riders raced at 9:10 am.

Add in the daily deluges Singapore has endured recently and the track wasn’t the fast, dry one that greeted the racers for Jungle Cross I in February.
However, while the muddy conditions did result in slower lap times across the board around the 3.4km circuit, they didn’t seem to affect Junaidi or his young protégé Riyadh Hakim Lukman too much, as the pair had amazingly opened up a lead of some 90 seconds after the first lap of five. [caption id="attachment_4549" align="aligncenter" width="1024"] The power pairing of Junaidi and Riyadh[/caption]
The next man was Anthony Brown, but the Cannasia rider must have known early on that he was racing for third place.

As the pair rode the first three laps as if roped together adventure-racing style, a Team Awano win was a foregone conclusion, but the big question was whether this was going to be the day when student outfoxed master; much has been made of the potential of the 18-year-old Riyadh, who has only been seriously racing for a few months.

The teenager will have to wait for another occasion to beat his mentor, though, as when Junaidi exited the Pit and onto the playing field section of the course for the fourth time, he was alone. Indeed, the reigning Singapore Mountain Bike National Champion heard the bell for the last lap some 45 seconds before young Riyadh.

This big lead allowed Junaidi to take his foot off the gas a bit during the last lap, but he finished the race in style, performing his trademark wheelie as he took the chequered flag. His winning time was 1 hour, four minutes and 33 seconds, which was almost 6 minutes slower than his effort in bagging Jungle Cross 1 in February.

Riyadh duly took the runner’s-up spot, some 30 seconds back, with Brown well clear in third, but 6 minutes slower than Junaidi.
While the champ made it look easy, he revealed that it certainly wasn’t.

“The course is getting tougher. The rain over the past week made it more difficult so today the speed, well, you couldn’t go very fast, it was more about the handling, avoiding crashes, avoiding stopping, just making sure it was a clean run,” he said.

We put it to Junaidi that he and Riyadh were indeed still going fast despite the conditions.

“Yes, Riyadh and I were pushing each other. In two weeks time we’re going to Japan (for the prestigious Coupe de Japan MTB race) so we’re making sure that we have decent fitness,” he said.

Junaidi is doing a fine job of mentoring Riyadh, but it’s obvious he still has that winning mentality within himself.

“Riyadh’s very strong, but I think he dropped off the pace on one of the technical areas (halfway through Lap 4) where he got a slipped tyre. I tried to wait but there were a lot of people from the other categories getting overlapped and I didn’t want to see my pace slow …” Junaidi said with a smile.

Wet or dry, Junaidi thinks the Jungle Cross course could be the perfect location for this year’s Singapore MTB Cross Country National Championships, which are scheduled for July 23, although neither the date or venue have been confirmed yet on the Singapore Cycling Federation (SCF) website.

“Yes, definitely. I think it’s a good place where you can attract many more spectators (compared to Singapore’s other MTB trails), it’s a very convenient location. But it’s more than that,” he said.

“You have a big, flat plane for the start area, you have technical sections, you have decent climbs, you have a decent descents and the distance is about 3.5km, which is the minimum standard for UCI requirements, so I’m definitely hoping that it will be here. I mean the rest of the trails in Singapore are awesome, but I think for spectators it would be great to have it here,” Junaidi said.

The Turf City location, with its easy access, ample parking, and wide selection of food and beverage outlets a few hundred metres away in the Grandstand, is no doubt one of the reasons that the Jungle Cross series continues to thrive, although a policy of continuous improvement to the course is a huge factor too.

The mountain biking element of the Jungle Cross program is especially flourishing, but the still-relatively-new-to-Singapore discipline of cyclocross has room for growth in terms of participation. Yesterday’s CX race received a boost, though, with, for the first time, a sizeable representation from the influential Cyclocross Singapore group.

The CX contest started the action at 8am sharp yesterday, with the racers set five laps of the original 1.9km Jungle Cross course; the extended 3.4km version is too technical for the cross bikes, which are essentially road bikes with greater fork and seat-stay clearance to allow for treaded tyres.
Straight from the horn it was the familiar face of multiple Jungle Cross winner Tim Clarsen (Specialized Roval Mavericks) shooting to the front, closely followed by Robert Lamb and Ahmed Nadzry Azli (Cyclocross Singapore). While definitely muddy in places, the track was relatively fast with most of the climbs rideable, a fact no doubt helped by the CX race being first on the card.

The toughest climb is the final slope that takes the riders out of the ravine and onto the playing field. Clarsen and Lamb emerged from it together after Lap 1 with Ahmed not too far back, but by the next time round, the Specialized man had opened up a gap of 20 seconds on Lamb thanks to a sizzling lap of 6:16, the fastest of the day. From there, barring a technical misfortune, it looked like was only going to be one winner, and Clarsen duly brought it home in a time of 33:48. [caption id="attachment_4547" align="aligncenter" width="1024"] The Cyclocross podium[/caption]
Lamb took his second consecutive Jungle Cross runner’s-up spot, some 70 seconds back, while Stephen Ames (Specialized Roval Mavericks) overhauled Ahmed to take the final spot on the podium.

Post-race we spoke to some of the newcomers from Cyclocross Singapore for their thoughts on the Jungle Cross experience.

“I think the course was very interesting. It’s very different from the terrain that we are used to riding with Cyclocross Singapore. It’s tougher, more challenging, but the way cyclocross should be,” said Timothy Rajah. “The roots were tough and the mud was pretty cool as well.”

But Rajah says he’ll return to Jungle Cross and will encourage more of his group to come to future editions of the series.

“I’ll definitely be back. And lets try and get more than 20 Cyclocross Singapore riders next time,” he said. “I think the atmosphere was awesome, really awesome. It was lively, you can bring your family down here and have a good time.”

Sharing the short course with the cyclocross riders yesterday were the Juniors B (13-16) and MTB Sports categories, with Nur Syafiq (Willow) and Lahasan Karim the respective winners of those races.

Round two of three on the Jungle Cross II race card saw the action move to the extended 3.4km course, with the Super Masters (45+), Women’s Open, Juniors A (17-18), Fat Bike and All Mountain races; all five categories faced four laps of the circuit.

After the first lap, the Super Masters race looked like developing into a good contest between John Van Wyhe and Richard Sinclair (Cannasia), but Van Wyhe put the hammer down on Lap 2 and won comfortably in the end. Sinclair was second with Fredrick Scharf (Swiss Club MTB) in third.

Arfan Bin Faisal won the Juniors A title with ease, as did Tsalina Phang (Athlete Lab) in the Women’s Open, and Keith Elsewhere in the Fat Bikes. [caption id="attachment_4548" align="aligncenter" width="1024"] Glutton for punishment: Ahmed Nadzry Azli raced both the Cyclocross Open and Masters MTB races[/caption]

The All Mountain racers had a few extra technical challenges thrown into their version of the 3.4km course, with Bujang Farouk proving the strongest and taking the win.

On course at the same time as the Men’s Open in the last round of action was the Men’s Masters (35-45) category. Halfway through the four-lap contest Jasper Silkeborg (BikeLabz) had opened up a 30-second lead on Khaniz Omar (Twenty9er Racing Team) and looked good for the win, but mountain biking by the very nature of the uneven terrain it is raced upon is a tough sport, and mechanical problems are a common feature.

Silkeborg banged his rear derailleur on a log during Lap 3 making his bike virtually unrideable. He made it back to the race village area and acquired another bike, but the switch was deemed illegal by the SCF commissaries and he was pulled from the race.

This opened the door for Khaniz and the experienced Twenty9er man went on to take the win comfortably from Ben Crookenden (NLOM Racing).
Rules are rules, but in grassroots events such as Jungle Cross perhaps a little leeway is required. With Jungle Cross now being part of the SCF season-long ranking series, it is subject to UCI rules, but maybe for technical breaches such as bike or wheel changes, points could be forfeited while allowing the riders to at least finish the race.

One group of riders who didn’t have to worry about technicalities were the boys and girls taking part in the morning-long Kids Clinic and Fun Races. This element of Jungle Cross is very popular, with the under 13s enjoying a dedicated section, including a purpose-built mini pump track to help hone their skills. The next round of the series, Jungle Cross III, is set for July 9, just two weeks before the MTB nationals.

For details of that event and results of Jungle Cross II, visit www.cycosports.com.
Photos by Rhys Cheng.