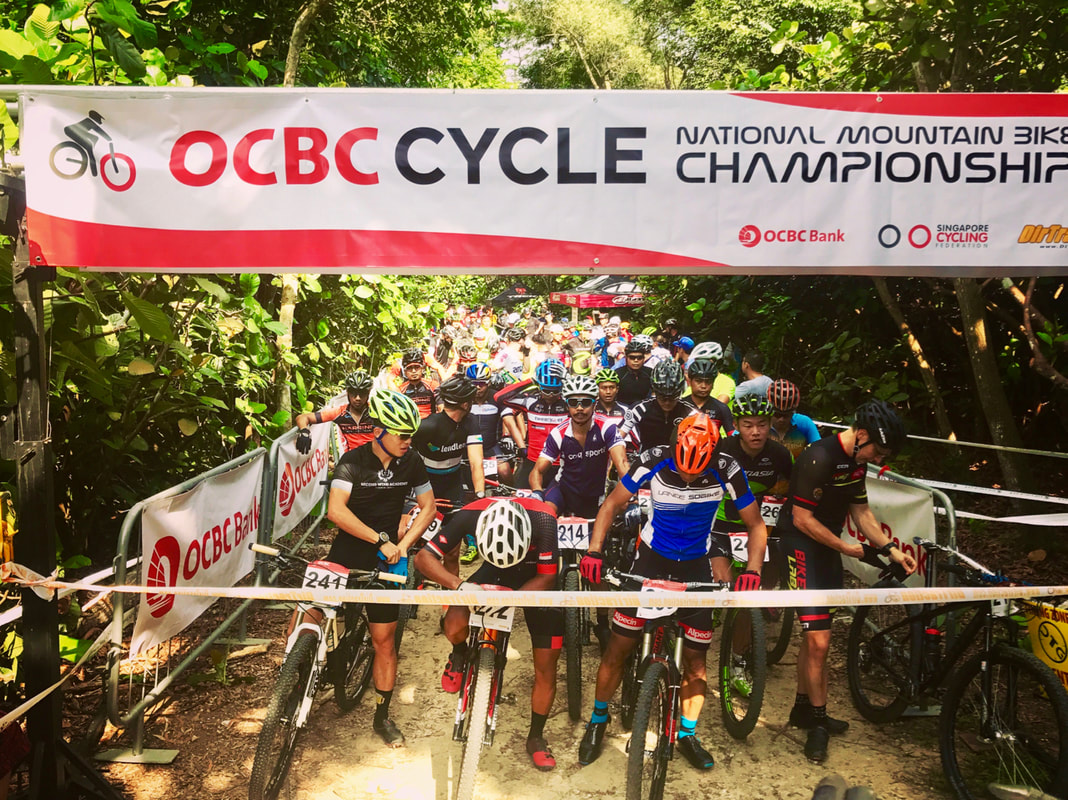 Perfect conditions greeted Singapore’s mountain bikers as they flocked to the new Chesnut North venue to race and/or spectate on a cracker of a course carved out by the team at race organisers DirTraction. A rare week of no rain meant the trails were bone dry and the racers took advantage by tearing round a roughly 3km course. The circuit was heavy on single track, some parts fast and flowing, others bits more technical, and the inclusion of a section of the downhill course just after the start/finish line provided thrills and spills for the spectators throughout the morning.

The Elite Men’s race was the main event of the day, and top storyline pre-race was whether Junaidi could hold the challenge of not only Brown but of his young protégé Riyadh Hakim Bin Lukman (Team Awano Treknology3).

The Team Awano displayed their intentions early by pulling away from the rest of the field from the gun and by the time they charged up the slope through the big crowd lining the start/finish stretch after Lap 1, they had opened up nearly seconds on Brown and Mun Yong Liang (Team Trail+), the only two other riders to break the 12-minute lap mark.

Riyadh set the fastest lap on the opening salvo, his 11:01.5 just three tenths of a second faster than Junaidi. The youngster couldn’t maintain that speed, though, and next time through the assembled throng at the end of Lap 2 he’d lost some 20 seconds to the defending champ, with a loss of a further 10 seconds coming on Lap 3. 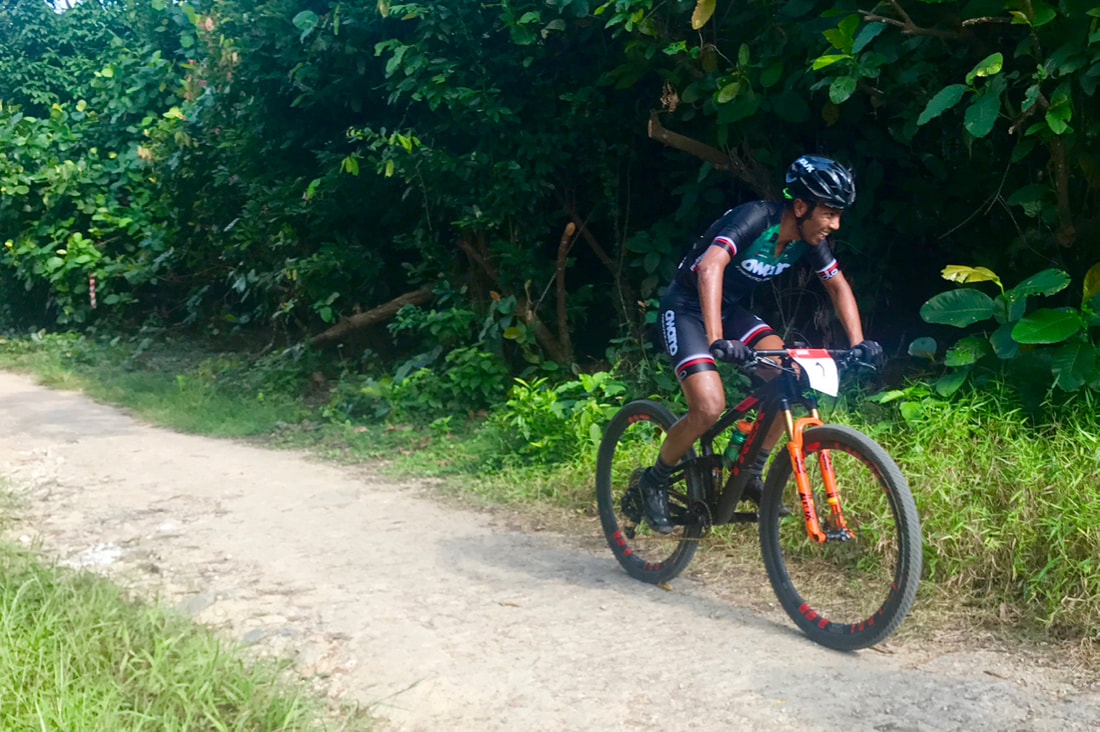 Multiple national champ Junaidi Hakim
Behind, Brown was tapping out a rhythm that brought remarkably consistent splits, and while Junaidi had increased his lead to some 40 seconds at the halfway mark, the Cannasia man had Riyadh firmly in his sights.

Some drama unfolded just before the end of Lap 4, as Junaidi had to wait for an ambulance to clear the tight start/finish stretch after it had collected a rider injured on the downhill section. The delay cost the race leader lost some 10-15 seconds, but he still had a sizeable advantage over Brown and Riyadh, who had come together as they completed Lap 4. It would have taken a brave person to bet against Junaidi with two-thirds of the race distance completed.

​So it was a huge surprise to the crowd when next time around, Brown had not only dropped Riyadh but also caught Junaidi. Indeed, as they started the last lap, it was Brown who surged past the defending champ and took the lead up the short, sharp slope that led into the downhill section.

It was a long 11+ minutes as the excited fans awaited the outcome of that final lap, with all eyes were focused down the slope to see who would appear out of the jungle first onto the home stretch. The teeth-gnarling Junaidi emerged first a with Brown following a few seconds later, but Junaidi stomped down hard on the pedals up the final incline to make sure there was no way back for Brown, as he clinched his fourth Singapore mountain bike national title to go with the single road and time trial crowns also in his palmares.

Junaidi’s winning time was 1 hour, 9 minutes and 7 seconds, with Brown 7 second back. The tall Briton had pushed Junaidi harder than most would have expected and must have been dreaming of the win when he took the lead so far into the race, but in the end he had to settle for the runner’s-up spot.

Riyadh comfortably held on for third place and the final spot on the elite podium, but he trailed his winning teammate by some  90 seconds. 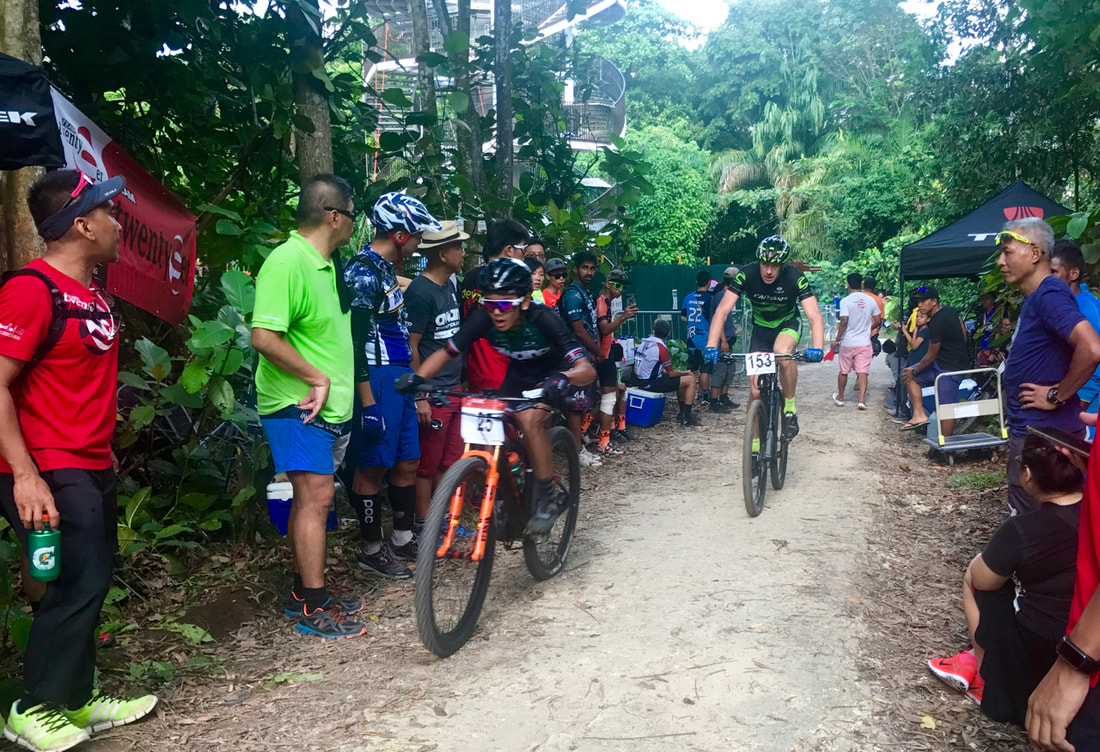 Anthony Brown chases Riyadh Hakim
Post-race, Junaidi expressed happiness at the win but there was also a bit of relief in his voice.

“I’m feeling good. I wasn’t really that well prepared, but it’s always good to defend the title. I tried my best, and the last few days of hard work training over here paid off,” said the multi-talented champ, who of late has been primarily focusing on training with the Team Singapore road cycling squad ahead of next month’s SEA Games in Kuala Lumpur.

“The course was fantastic, it was something new, so it been very nice that every year it (the Nationals) is at a different location, so every year gives us something new and surprises, so kudos to the organisers,” he said.

We asked Junaidi how the big lead evaporated.

“I think I was maintaining my laps but I think Anthony put in a very good lap on the second last lap. I was hoping that it was my teammate Riyadh who was behind me, but it was the other way round, so I had to push hard again towards the end,” he said.

Was there any sense of panic when Brown passed him?

“No, I didn’t panic? I think it was just the best time for me to recover when he overtook me, make sure I had the fresh legs for the last five minutes to the finish and give it all up,” said Junaidi, adding that he retook the lead about 4 minutes from the end, right before the open fire trail. 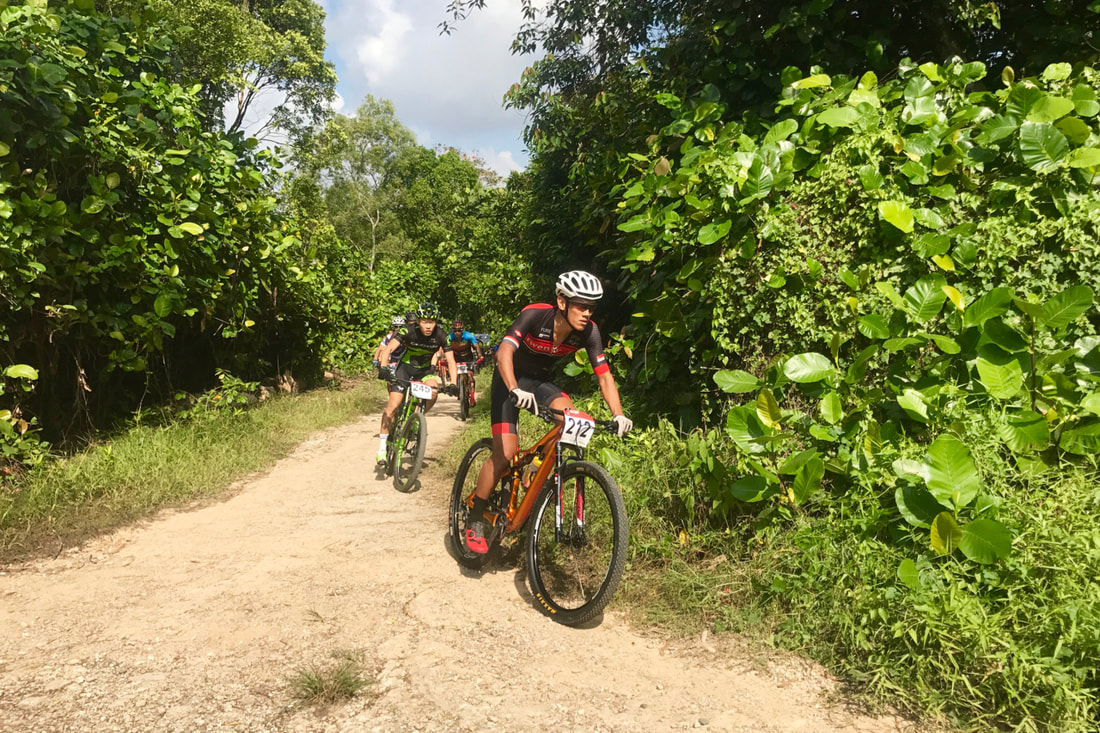 The Masters race saw a wire-wire victory for Mohamad Khaniz bin Omar
The undisputed king of Singapore mountain biking hopes to return in 2018 to defend his title yet again, but he has an eye on some talented and familiar youngsters waiting to snatch his crown.

“Hopefully (I’ll defend), but as my current project is the development of the young cyclists, I believe Riyadh and Arfan Faisal are the up-and-coming riders, and it won’t be easy to keep up with those younger ones. But yes, I’ll always do my best.”

It’s back to the road for Junaidi now with the SEA Games just weeks away?

“It’s been very tough training. This week we’re going up again to Malaysia for our training camp number two. We are practicing a lot on the team time trial so hoping to bring some medals back.  And we hope that you guys will give us some support too back at home in Singapore,” he said.

​In the Women’s Open race, Tsalina Phang didn’t come under the same pressure as Junaidi to win her Singapore National Championship. Starting just after the elite men, Phang only had four rivals line up beside her, but she quickly showed she was in a class of her own, building a lead of some 70 seconds over the closely grouped trio of Zhang Tingjun, Teerarat Pittayanurak (Trinx Thailand) and Prudence Roberts by the end of the first of four laps the ladies were set.

Phang extended her lead lap by lap and took the chequered flag 53 minutes and 50 seconds after she started. Teerarat was the runner up, some 4 minutes back, with Roberts following 30 seconds later in third.

The competitive action at the 2017 MTB national championships began with the Juniors, and another of Junaidi’s Team Awano Treknology3 protégés, the afore-mentioned Arfan Faisal, was in the thick of the action over the four-lap contest. 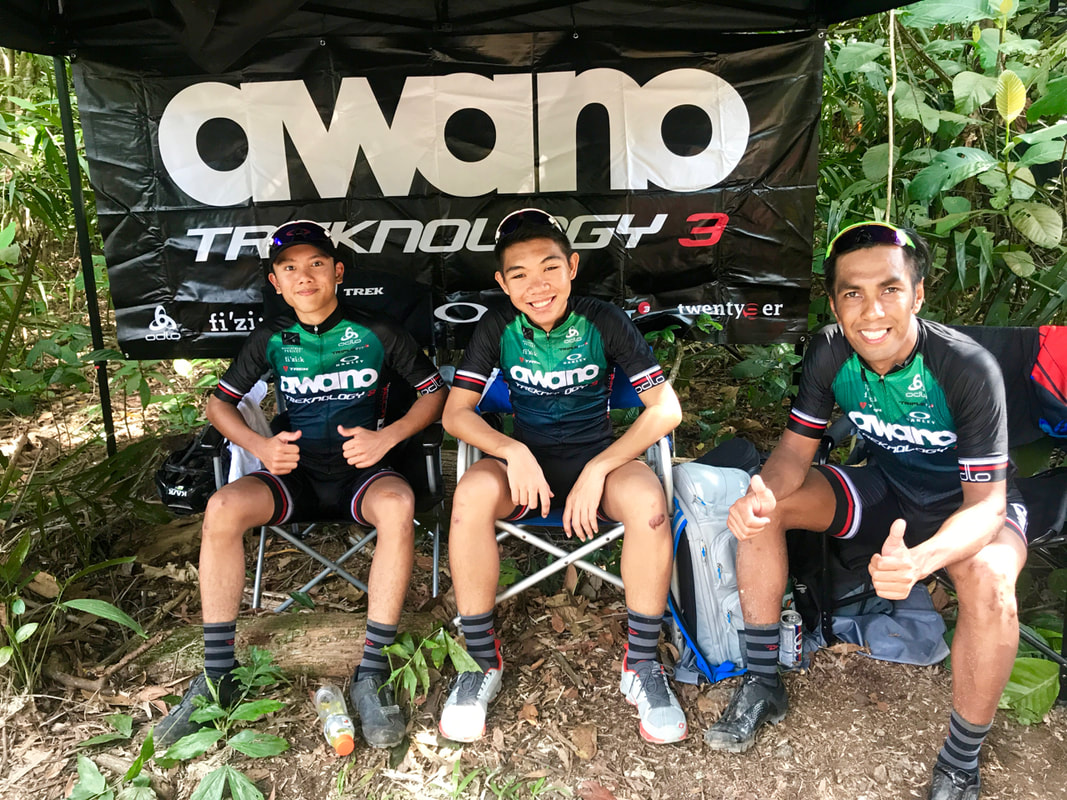 The successful Awano trio of Riyadh Hakim, Afran Faisal and Junaidi Hashim
Arfan enjoyed a toe-to-toe dual with Watcharakorn Onthuree (Trinx Thailand) for the first two laps, but unleashing a brutal third lap which saw him open up a big led, and he went on to win comfortably. Watcharakorn finished second, with Abu Hudzaifah Bin Masnawi in third.

Finishing out the cross-country program were the Masters and Super Masters races, both over four laps of the Chesnut course. These contests attracted the biggest fields of the day, and with the two races starting just a minute apart, the combination provided a non-stop hour of action for the spectators.

In the Masters race (for riders aged 35 to 44), it was the familiar face of Mohamad Khaniz bin Omar (Team Twenty9er) who crucially reached the first corner first, and despite the close attention of Mohamad Herman (Yetibt) throughout the first lap, it was a lead that Khaniz never relinquished. He took the title with a time of 49 minutes and 34 seconds. The other podium places never changed hands throughout the race either, with Herman taking the runner’s-up spot some 50 seconds back, and Cannasia’s Liang Jenn Heng securing third, just 8 seconds behind Herman.

The Super Masters (45+) title went to Frederic Schaff (Swiss Club MTB Riders), who notably covered the four laps 28 seconds faster than the Masters winner Khaniz. The runner-up Alvin Lim (Team Entro Cycle) put up a brave battle, but it was a fruitless chase, with Lim finishing some 90 seconds back from Schaff.

However, with Schaff being a Frenchman, he was ineligible for the national championship, so Lim claimed the ultimate consolation prize of putting on the red and white jersey as Singapore National Champion. The final spot on the Super Masters podium went to Kevin Blacklock (Cannasia).

Singapore’s gravity riders also got their place in the spotlight yesterday, with the OCBC Cycle Singapore National Mountain Bike Downhill Championships following immediately after the XC.

The full-face helmet brigade put on a daredevil show over the fast and furious short course at Chesnut.

The Women’s Elite champion was Nur Nasthasia Nadiah, with Sylvia Tan (Unsprung) in second and Tsalina Phang (Attitudebikes) in third.