Johor Circuit proves home away from home for Singapore roadies

Pasir Gudang, Malaysia,
April 9, 2015
A short drive/ride from the Causeway connecting Singapore and Malaysia in the town of Pasir Gudang lies the Johor Circuit, a 3.9km racing track, that despite being situated in another country is building a case for itself to be centre of the Singapore road racing scene.

While it is possible to get the necessary permits to close roads in Singapore for mass participation cycling events (and triathlons), the substantial costs and red tape involved in the process have made it almost impossible for organisers of smaller grassroots road cycling events to stage races in the city state. The result is that Singapore’s action-starved roadies have to leave the country in order to race, with the Malaysian state of Johor and the nearby Indonesian islands of Bintan and Batam hosting a number of relatively accessible events. Among the companies staging these races is the Singapore-based Cycosports and it was Cycosports who “discovered” the Johor Circuit.

Cycosports staged its first Pasir Gudang Circuit Race there in August of last year and followed that up with a second event just last week on April 5. Both race days proved to be huge successes and have left those who took part scrambling for more. 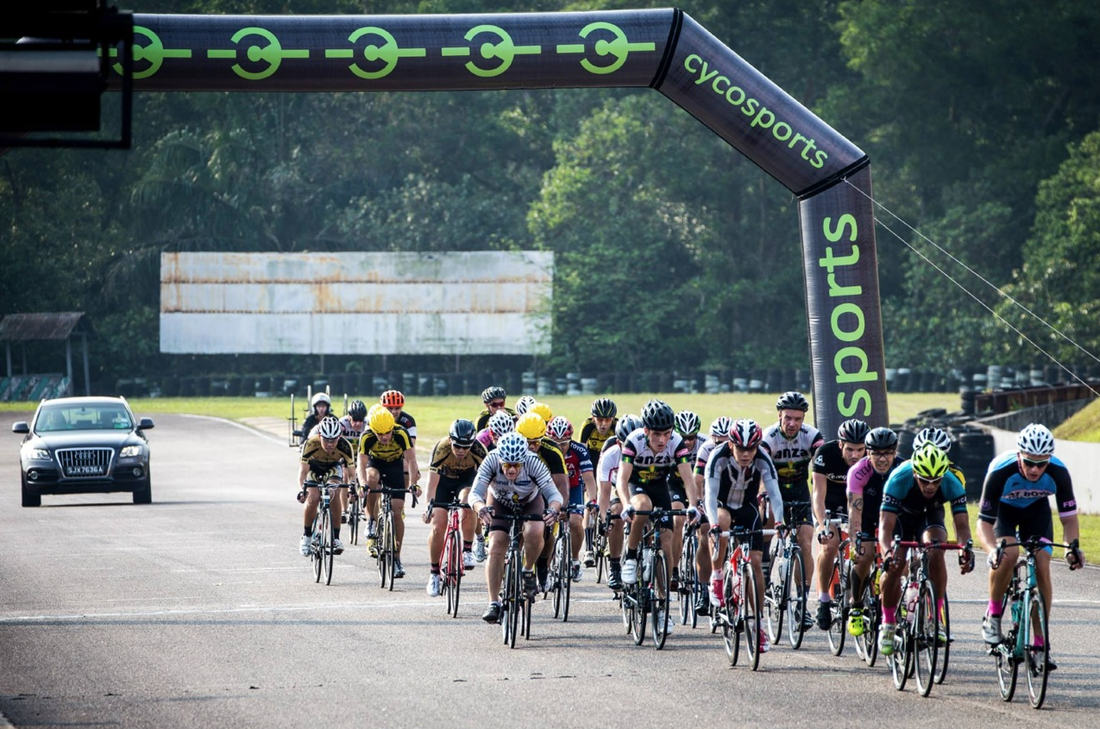 The Cat 3 men start another lap
The Johor Circuit is a dedicated motorsports facility, complete with a fully functioning, if a bit rustic, pit lane and grandstand flanking the start/finish straight. But most importantly, the track is in great condition and perfect for bike racing. Certainly it’s not as smooth as an F1 track, but the chipsealed surfacing runs true, is pothole free and provides good grip even in the rain. And best of all, it’s completely traffic free, with no need for water barriers or flag-waving marshalls and volunteers to keep errant vehicles or pedestrians off the racecourse.

Getting there is simple. The Johor Circuit is just 20km east of the Johor Bahru immigration complex. While most of the participants in the two editions of the Cycosports race days have driven or taken the specially laid-on charted coaches to the track, many others have opted to ride there. The latter is probably not the best option for those unfamiliar with cycling in Malaysia, but for those who regularly ride in the Kulai and Desaru districts of Johor state, the trip to Pasir Gudang is straightforward once the JB immigration checkpoint has been negotiated.

The circuit is fast and sweeping and features just two hills, one a short sharp affair, the other longer but less steep. There are also 10 corners/turns of varying angles, including one right-left chicane just before the end of each lap, but such is the width of the entire track, that for the more experienced riders, there’s really no need to touch the brakes on any of the corners, even going through the chicane. The result is that the fast boys and girls love the circuit and are clamouring for more events there.

But the Johor Circuit’s not-too-technical nature also makes it the perfect place for curious recreational roadies to dip their toes into the wonderful world of bike racing. 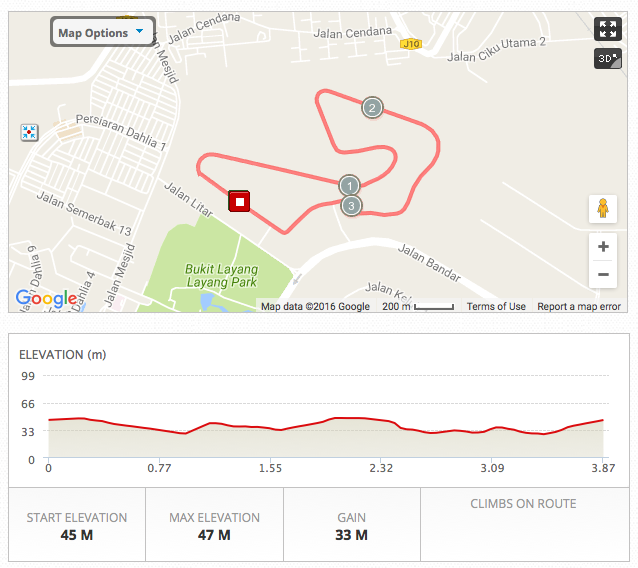 Aside from the boring contests up and down the dead-straight and pancake-flat 12km loop of the Changi Coastal Road, the only other form of grassroots racing that Singapore has (sporadically) witnessed over recent years has been criteriums. Commonly known as crits, these usually feature short courses 1-2km in length, lots of tight corners and lots of crashes. Good bike-handling skills are vital to safely enjoy crits, but they have a chicken and egg aspect to them; the best way to learn the skills and build the necessary confidence is to race, but they are deemed far too dangerous by many cyclists to even enter.

While the length of the Johor Circuit at 3.9km slots it into the circuit race category rather than being a crit course, the skills required for both are basically the same, but the track’s generous width and corners take away a lot of the danger associated with crits and so the circuit provides a perfect arena to acquire and/or practice the basic skills needed.

The fact that there were no crashes in the four races (two of which took place in the rain) at the Johor Circuit last week is testament to its relatively safe nature; bike racing involves fast-moving groups of cyclists bunched closely together, so the odd crash is an accepted occupational hazard. 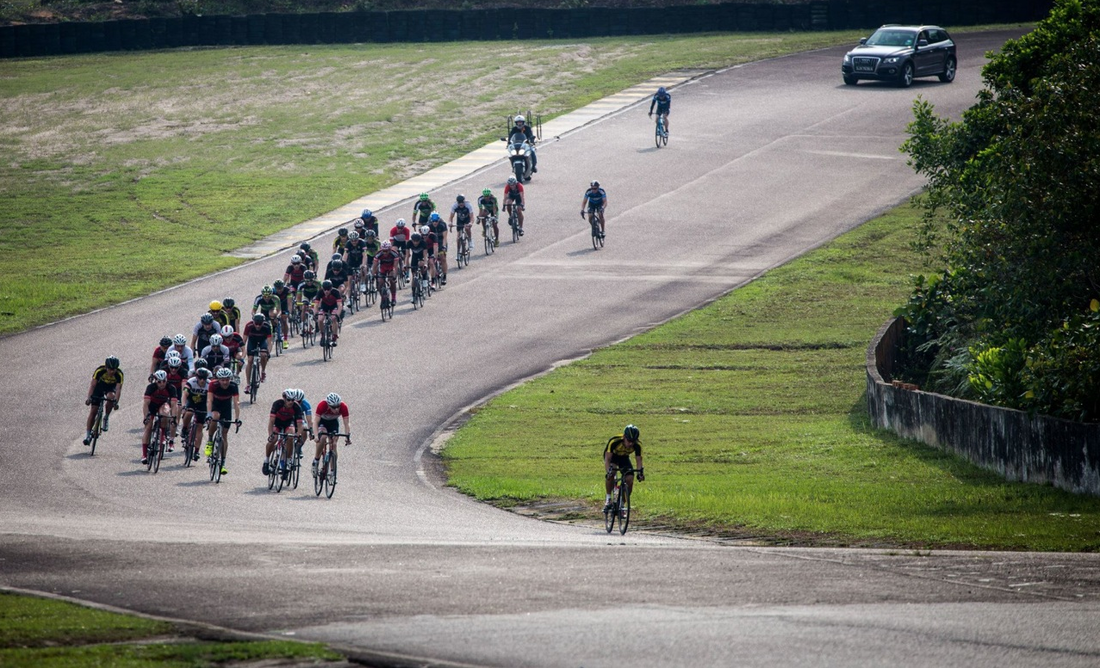 Most attacks proved futile
The main man behind Cycosports, long-time Singapore resident and owner of the Bike Plus shop Kent McCallum, recognises the importance of attracting newcomers to the sport of bike racing and so the two Cycosports race days at the Johor Circuit have featured four separate contests: Cat 1 for the elites; Cat 2 for those with some experience but perhaps not the legs to keep up with the top dogs; Cat 3 for those all-important newbies; and last but not least, a Women’s race.

The distances at last week’s event ranged from 10 laps (39km) for the Cat 3 riders to 13 laps (51km) for the Cat 1 men. The Women were scheduled to race over 10 laps too but a rain delay resulted in their contest being reduced to seven laps.

The course is basically flat for the first 2km before the riders hit the main hill, which is entered via a 90-degree turn. It’s short, just over 100 metres long, but it’s very steep and strings the field out. It’s followed by a fast, sweeping corner some 600 metres in length, before a much shallower but still quite punishing slope when tackled for the umpteenth time leads into the downhill chicane. From the exit of the chicane to the start-finish line is only 600 metres but this section features a false flat that can sap the strength of breakaway riders who might have escaped through the right-left hander.

The Cat 2 bunch round the final corner ready for another lap
The Cat 3 contest started the action, with some 40 riders lined up on the start line. With them, and for all the other races on the card, were a commissaries’ car, a motorbike providing neutral wheel support and an ambulance (thankfully not required). It was a keenly contested affair with the lead bunch crossing the line to great acclaim after just over one hour of racing.

One of the great aspects of circuit racing and crits is that while one group of racers is on the track, the competitors from the other categories are right there providing support each time the combatants cross the start/finish line and of course for the grandstand finish. And such was the case at the Cycosports Pasir Gudang Circuit Race.

The Cat 2 contest was another cracker but the blue skies that had greeted the riders as they assembled at the track earlier, had gradually turned grey as the morning progressed and the Cat 2 race finished in a downpour. The rain didn’t take anything away from another thrilling sprint finish. 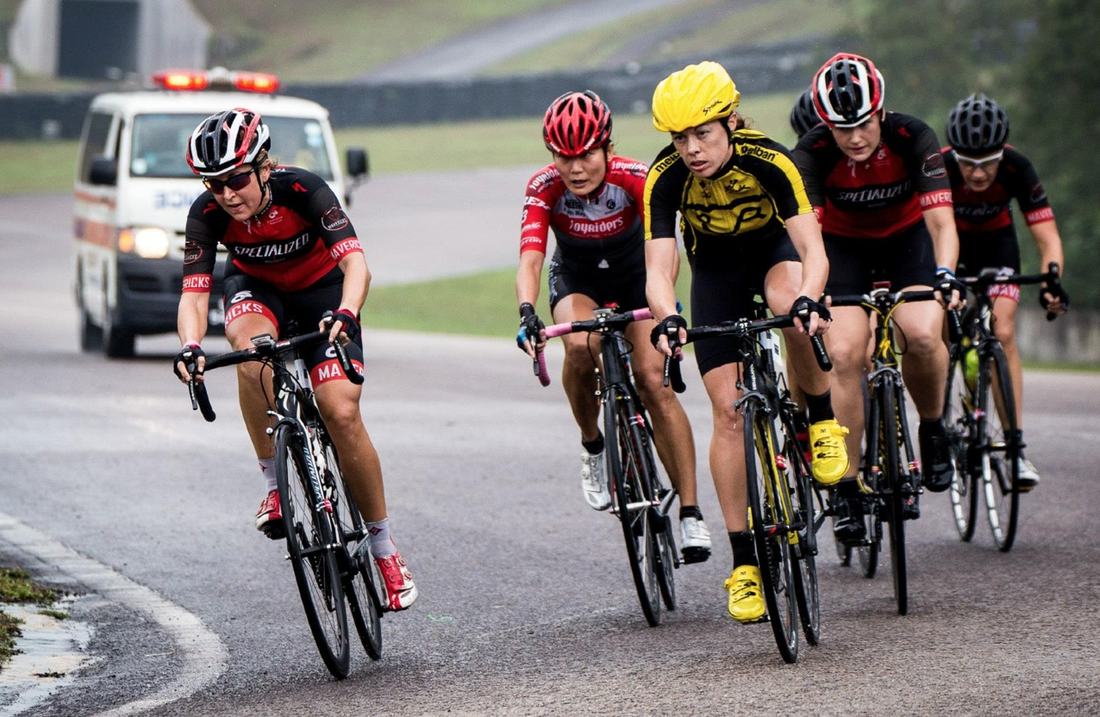 The lead women’s bunch stayed tight the whole race
The storm actually resulted in an hour-long delay between the end of the Cat 2 race and the start of the Cat 1/Women’s contests, but the fact that the circuit is a fully-equipped facility meant there was no huddling around pop-up tents and canopies trying to keep warm, as the pit building is just that, a concrete structure with walls and a roof and plenty of space for the riders and their supporters.
The Cat 2 bunch round the final corner ready for another lap
When the racing did get underway again, the Women were first to finish despite starting a minute behind the Cat 1 men, due to their shorter number of laps. It was another hotly contested affair, despite only eight women taking part, and like the two races before it, concluded with a sprint finish.

The thriving Singapore cycling scene has among its numbers a substantial number of women, but they seem especially scared of the concept of circuit racing, which is a shame, given that it’s definitely safer than taking to the roads of Singapore and mixing it up with cars, buses and trucks. 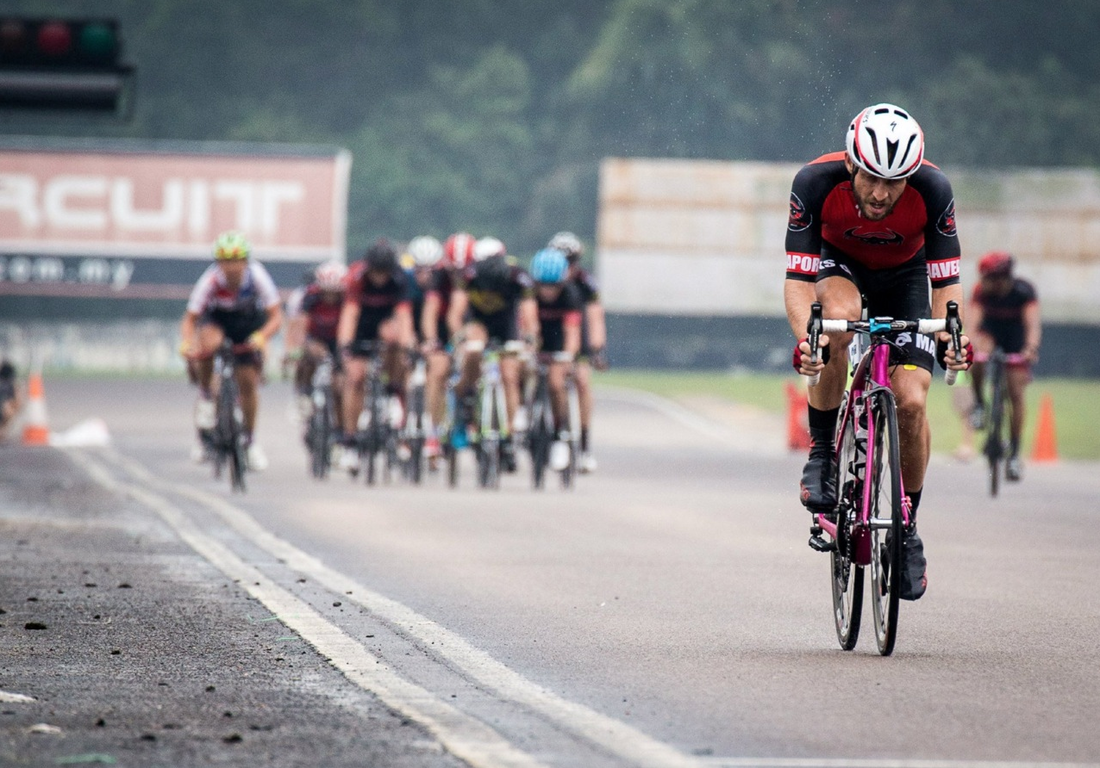 Attacking the Cat 1 bunch hurts
Historically, women’s races in Singapore have usually featured just one Women’s Open category, but in an effort to attract more ladies to racing, Cycosports set up a Women’s Cat 2 contest for the April 5 event. Alas, none signed up.

The Cat 1 race completed the action and once again was decided in a sprint, giving the spectators (mostly racers from the other cats) who lined the finishing straight wall and stood atop the pit building rooftop viewing area extra bang for their bucks. This time the decision was too close to call and it took a look at the photo-finish film to pick a winner … by less than a tyre width!

That approximately 150 racers made their way over from Singapore to Pasir Gudang (there was also a smattering of local Malaysian entrants) on what was Easter Sunday is a testament that there is a market for grassroots bike racing in Singapore. Indeed, the Cat 2 race was capped at 60 and was sold out a week before the event. 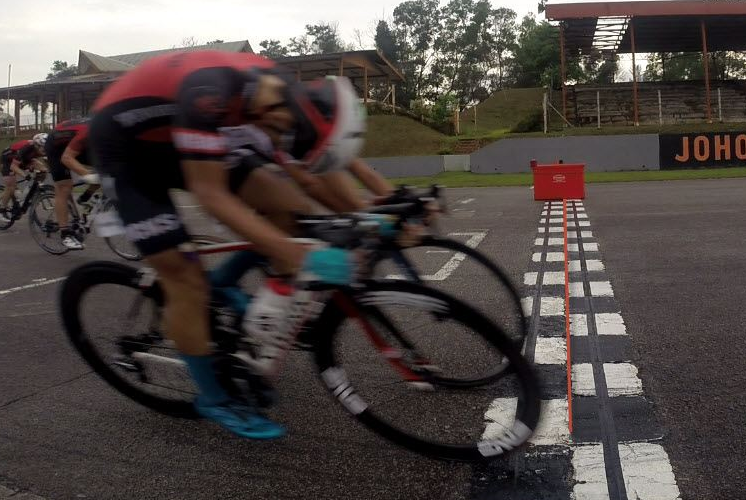 The dramatic end to a great morning’s racing (photo by Cycosports)
The feedback on the Johor Circuit from the racers who have ridden there is overwhelmingly positive. Post-race last Sunday, the talk among the various local clubs and teams, was how to get racing at the Pasir Gudang track more often. While Cycosports hasn’t yet announced any more race dates there yet, the company has hinted it’ll be back for more circuit racing in the not-too-distant future, while rumours of a time trial have been circulating too; multiple laps of the 3.9km circuit and its 33 metres of elevation will provide an excellent test for a race of truth.

It’s a bit sad that it takes a facility outside the country to get Singapore’s roadie community excited about racing, but until the relevant authorities and sports federations make it easier to compete at home through either building a dedicated circuit or cutting through the costly red tape to get road closures, the short journey across the border to Pasir Gudang is well worth the effort.