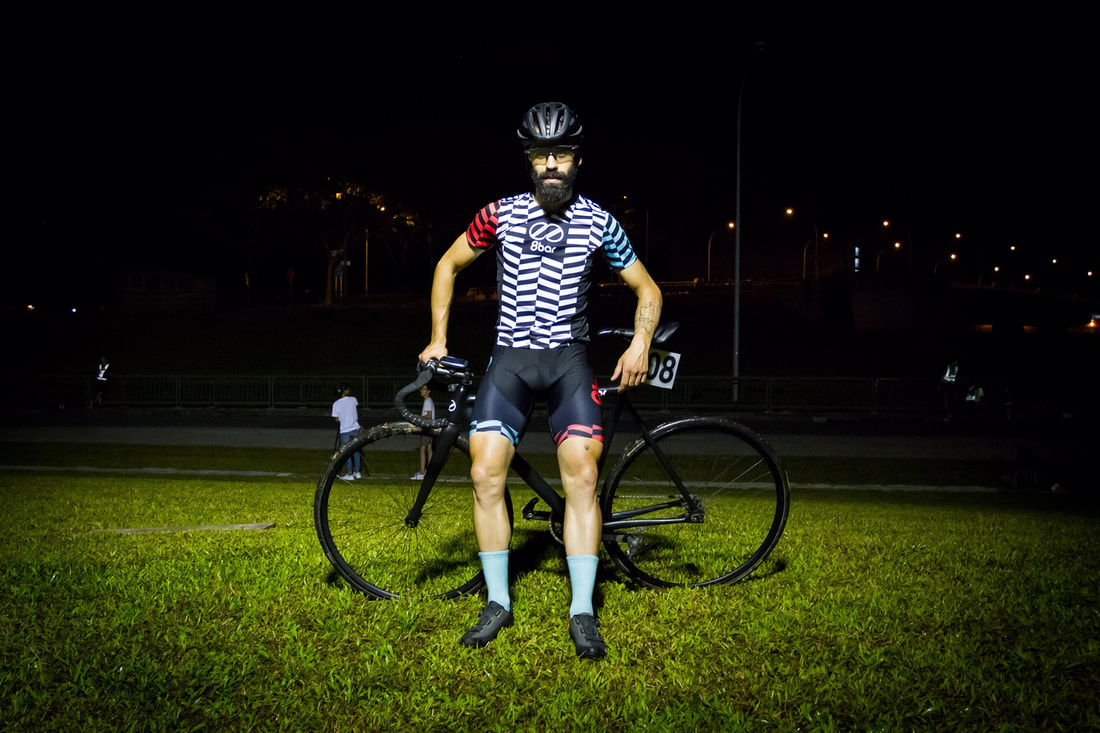 Photos by Rhys Cheng
December 30, 2016
The distinctive cycling discipline of fixed gear cycling is usually associated with commuting, late night urban riding or short, sharp criteriums such as HolyCrit, which made a triumphant return earlier this month after two years of bad headlines and legal woes.

One thing fixed gear cycling is not commonly associated with is touring, but we recently met one man and his fixed gear bike doing exactly that. His name is Luis de Sousa and Flat Spoke Media made his acquaintance  while covering HolyCrit IX.

A native of Barcelona, de Sousa visited Singapore for the nighttime race in Kallang as a side trip to a six-week tour of Thailand and Malaysia, which in itself is just a warm-up for a 10-week journey to India next month. Dressed to kill in a colourful ensemble, sporting a thick, well-groomed beard and riding a nifty 8Bar bike, he was the epitome of hipster fixie cool.

We had a quick chat with the friendly, approachable de Sousa on the sidelines of the race and arranged to meet up with him the next day for a ride and  chat to find out more about his adventures.

“Yes, I’m travelling around Southeast Asia, I’ve been here for about a month now and the main objective of my travel is to ride my fixed gear bike around either doing long rides alone or commuting with locals, or being in races like HolyCrit last night. I started in Bangkok, from Bangkok I moved around Thailand a little bit, then I headed to KL and now I’m in Singapore,” he explained.

“My next destination is Langkawi and then probably Penang. So just Thailand, Malaysia and Singapore for this trip. I’ve travelled a fair bit in Asia before but this is my first time with the fixed gear bike.”

​For those who aren’t familiar with fixed gear bikes, their main feature is in their name; instead of a cassette at the back offering a wide range of gears to assist with changes of terrain, “fixies” only have one gear and the wheel hub it’s attached to is fixed, meaning that constant pedalling is required to make it move. To put it another way, there is no freewheeling with a fixed gear bike.

This isn’t a problem for flat ground, but depending on the size of that single fixed gear, it can turn the slightest hill into a grind, and any descents into high-cadence superspins.

“Real” fixies don’t have brakes either, making riding them a highly specialised skill. But with that one gear, a single chainring up front and no brakes, the maintenance requirements are stripped down, which in some ways makes a fixed-gear bike the perfect travelling bike … at least on flat terrain.

While Bangkok and Singapore are fairly flat, Kuala Lumpur, Penang and Langkawi are definitely not so we wondered why de Sousa chose a fixed-gear bike for his trip. 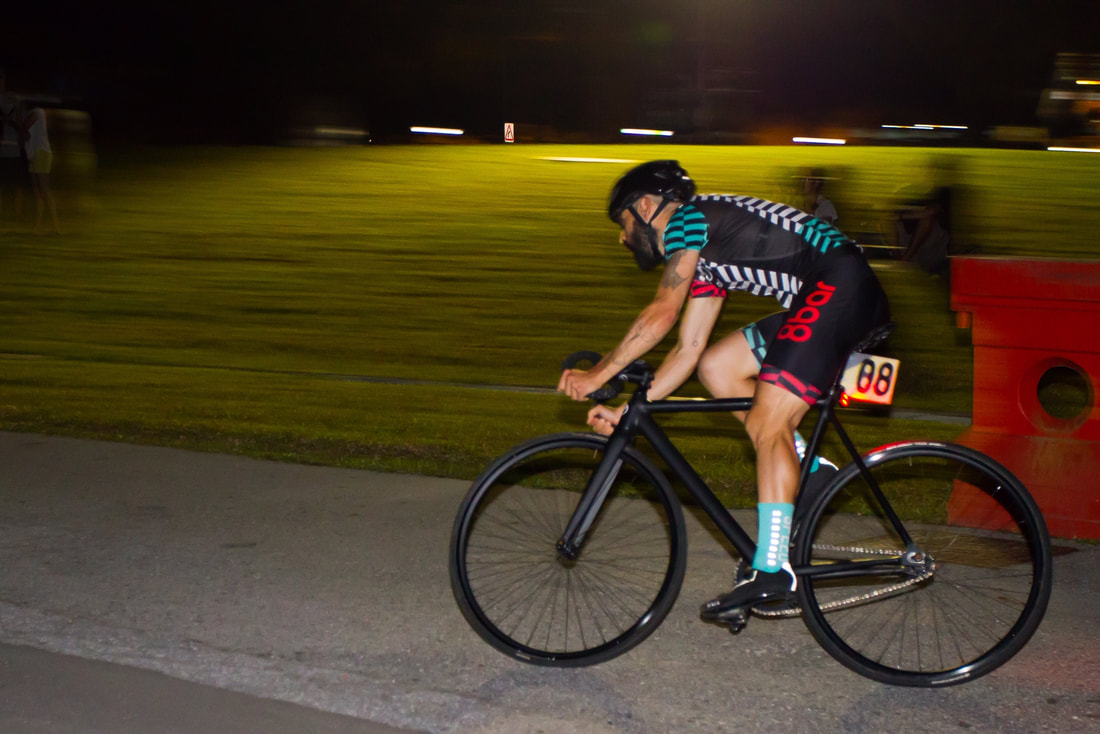 “I travel every winter,  and I met this guy who was travelling on a fixed gear, a German guy from RatRace, a famous group of cyclists, and suddenly it just lit a spark in a mind. ‘This is simple and easy and I can join together my two passions cycling and travelling in a easy way’. And because of the easy maintenance, there are only a few parts, I only need a few tools.” said de Sousa, who works as bike tour guide back home in Barcelona.

“I’ve been riding mostly road bikes for the past two years, although I haven’t actually been cycling for that long, probably four years commuting and two years more serious road cycling,” the 28-year-old added.

Had he encountered any problems with the bike?

“So far, nothing much. The puncture I had riding with you was only my third and that’s it, nothing else. A bit of a squeaky chain, because it’s rainy season and in Malaysia I rode in the rain constantly for, I don’t know, one week. But I’d rather be wet here in Asia than riding in the freezing cold in Europe. I just need to clean the bike more. So yup, so far, so good,” he said.

He’s not a complete masochist, though, and when de Sousa knows he has a partcularly long or steep hill coming up, he can change the size of the cog on the back hub, although not with a simple swipe or click of a button; it requires manually switching out the cogs.

By the time this article is published, de Sousa will have completed the Southeast Asia trip and after a few weeks back in Spain – “I want to please my mother by spending Christmas at home” –  he’ll return to Asia to India.

We put it to de Sousa that cycling on what are for the most part good roads and infrastrcuture in Thailand, Malaysia and Singapore will be a completely different propostion to riding in India.

“For sure. I’ve been there before without the bike, I think to go there for the first time with the bicycle would have been crazy. Now that I know the place, I have contacts there, but still I’m a bit scared. I still need to plan a lot. It might be more of touring stuff, not what I’m doing now here in Southeast Asia. What I’m doing now is I’m basing myself in a place for a while and I ride as much as I can but I always come back. Maybe in India I’ll go from place to place. And maybe sometimes I’ll take the train,” he said.

“I haven’t heard of anybody going to India on a fixed gear bike trip. It’s maybe a selling point. So it’s something that I really wanted to do, to be the first. I know that it’s really difficult to do things for the first time.” 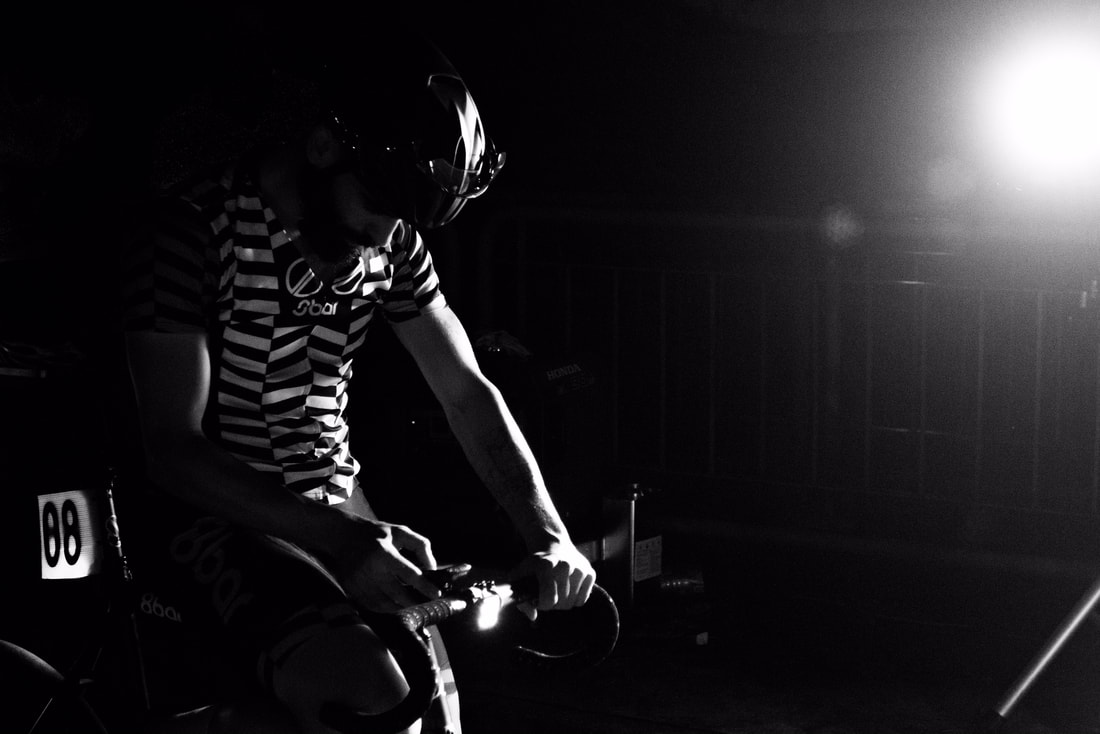 “I have a few sponsors who give me all the stuff like the bike, the clothing, the gear. So I’m taking pictures for them and writing about my experierences. The main sponsor is 8Bar, that’s where the bike comes from, a German brand. And then I got clothing from a British company called Morvelo, then I got a backpack from a Spanish brand called Fuga, bike bags from Restrap,” he said.

Luis revealed he won’t be done with Asia after India.

“I want to go to Taiwan, I want to go to Korea, there are so many places I want to cycle in. I mean you are passionate about something, you can’t get enough. But of course I have to go back to Barca, work again a little bit, but I’ve already started thinking about my next trip (after India),” he said.

When we pointed out that riding in the famous mountains of Taiwan might be a bit difficult on a fixie, he conceded that point.

“Maybe next year if I do the Taiwan thing or similar travels, I’ll try to do it on a road bike. If I get a sponsor … unless I got a massive rear cog,” he said with a huge grin.

Recalling the previous night’s HolyCrit also brought a smile to his face.

“It was really amazing. I didn’t expect such a big support by the sponsors and the race promoters were really organised. I was also surprised to see how big was the community, all the kids that came but were not racing. Huge crowds, young people, so you can really see that there is a future here for crit racing and for the fixed gear scene. I really had a lot of fun. It was a bit dangerous at times, but that’s racing, great fun,” Luis said.
“I think the format was perfect for the race, having five heats then the final as you couldn't possibly have had more than 20 guys on that course, only 300m, it was crazy,” he laughed. “But in terms of security and the width of the track, it was good, it was similar to Red Hook in that respect,” he said referring to the gold standard of fixed gear racing, the Red Hook series, which orginated in the New York borough of Brooklyn.
Luis revealed, though, that he discovered an even bigger fixie scene in Thailand.

“I went riding with two different groups in Bangkok, one of them was like riding in the city at night, and the others ones were more like doing long-distance rides during the day. So it’s pretty cool there,” de Sousa recalled.

“Plus they also have this criterium series. Initially my goal was to come on this trip for the Bangkok Crit, but they moved  it from November to February next year. It's going to be huge. I think they will four races next year, they do Bangkok, Phuket, Khon Kaen ... It’s really well organised, kind of a championship. It’s fixed gear but I know they also have a mountain bike category and I think they have road bikes too. And it’s actually bigger than HolyCrit because they have Singha Beer as the main sponsor.”

While he loves the racing, just the act of riding his beloved fixie on the streets and roads of the countries he visits is how he gets his main kicks.
“The thing I’ve experienced in every city I’ve been to is that just by riding on the road, I don’t know if it’s because of my look or whatever, but somehow always people approach me. Even if they are not riding bikes at the time, they say ‘hey man, I ride bikes as well, fixed as well. You should come with us to join for a race, for a ride’. This has happened everywhere. In Bangkok I was in a place having lunch and my bike was standing at one side of the place and I guy just suddenly approached and ‘hey, do you wanna ride tonight?’ and so I did,” he said.

“And just last night at HolyCrit I met a guy from from Perlis, which is near Penang, so he put me in touch with some guys from Penang. You meet a lot of people through cycling,” he said.

You certainly do. It was our pleasure to meet Luis de Sousa and we wish him well on his Indian adventures.