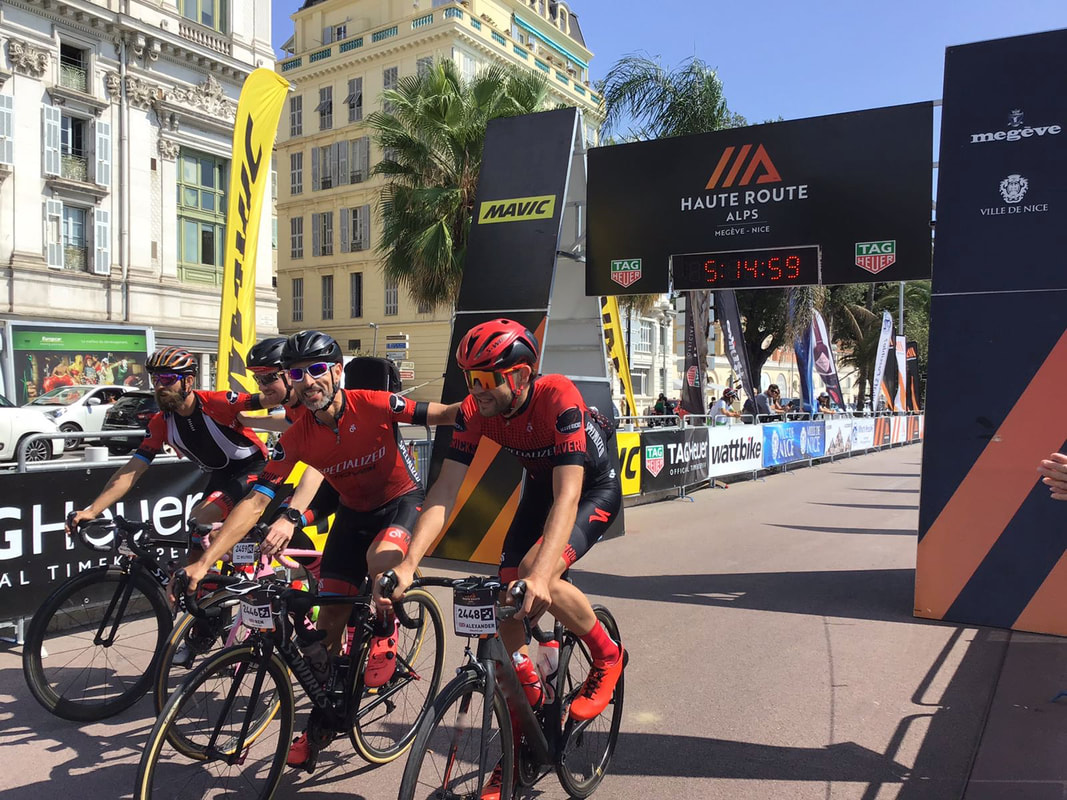 September 7, 2018
Ben Arnott and four of his buddies from the Singapore-based Specialized Roval Mavericks racing team recently completed the gruelling but epic Haute Route Alps 2018. We published Part 1 of Ben's account yesterday, now here's the conclusion covering stages 4 to 7.
Stage 4 – Les 2 Alpes to Saint Veran
With three peaks above 2,000m, just getting enough oxygen into your lungs posed a challenge today. But riders also had to tackle the mighty Izoard at the midway point – 24.5km long and nearly 1,200m of climbing.

The first climb of the day started at the valley floor below Les 2 Alpes – the Lautaret was a relatively gentle entree and the peloton seemed content to ride tempo for the first 5km. But inevitably the pace ratcheted up on the steeper sections and soon three or more groups had formed as we traversed the mountainside and navigated the distinctive alpine tunnels.

By the time we reached the summit the time gaps were in the 10’s of minutes but there was no time to dwell on that as we rode straight onto an exhilarating descent towards the Izoard. The race was neutralised for 4km through Briancon but back on again once we hit the climb. With only 2km of flatter terrain coming after the 5km mark, the rest of the climb varied from 5-6 percent with long sections over 9 percent. To ride that for 24km can only mean one thing – extreme suffering, especially because the weather was now bright sunshine and temperatures into the mid 20s. We fought to the summit, doing our best to close down riders in front as the kilometres clicked by. In the final 5km the wind became an added challenge with strong headwinds coming from the valley top. At the crest we were rewarded with a feed station, cheese, ham, dried fruits, as well an array of energy drinks, gels and bars.
​
Nothing can beat the descent from the Izoard; an incredible road with good sight lines, gentle corners and a smooth surface. Descending skills can be honed but some of the riders just seem to be on another level – fearless, confident and super-aero. It was almost as easy to get dropped on the descents as it was on the climbs and a number of riders suffered that fate, including a couple of Mavs. Consequently, when we hit the final climb of the day, it was down to extremely small groups or individual riders. 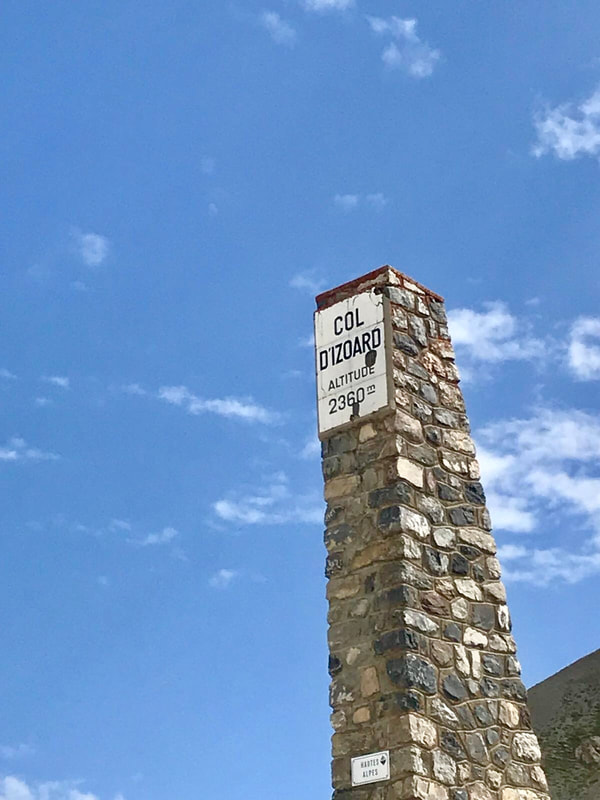 With the first 4km at 6-7 percent, then a flatter section for 2km, then a final 4km push to Saint-Veran, it has to go down as one of the most picturesque climbs of the event. It’s an almost forgotten valley leading up to a quaint hilltop village, complete with an old gent playing an accordion. Tres Francais. But for many of the riders the climb was the straw that broke the camel’s back – plenty of pain on the faces of the finishers at Saint-Veran, especially with a punishing uphill section through the village, coming after the flamme rouge.

The Mavs finished in a similar fashion to the previous stage; I took the bragging rights in 42nd place, Bastian followed up in 49th, then Sasha in 79th place, followed by Wilfred 95th and Matt in 239th respectively.
​
Stage 5 – Time Trial: Guillestre to Risoul
A simple challenge today – ride 14km up a hill from Guillestre to Risoul on your own, against the clock. Fastest rider wins. If you are looking for a target time, then Vincenzo Nibali holds the record over the 12.5km Strava segment, averaging 22.7kph up the steady 7 percent incline in the 2016 Giro D’Italia. He just popped over the border, aced the climb and headed back again ...
​
The weather conditions could not have been more perfect, especially for the earlier riders who started their runs before the heat of the day. 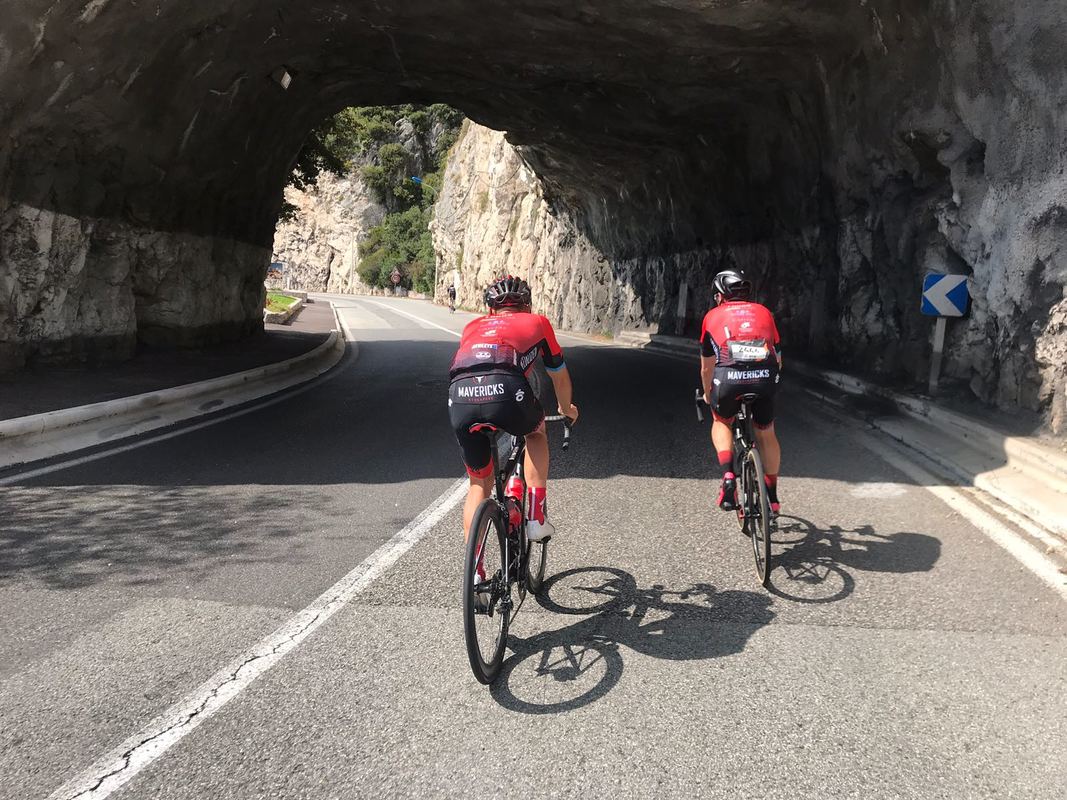 The climb itself is very pleasant, each of the hairpin corners named after a great rider of the last 50 years – you see Merckx, Hinault, Pantani, Nibali, Virenque, Froome, etc. The unpleasant part is how hard you have to push to score a decent time.

All the Mavs pushed hard today and all got into the top 33 percent, despite the growing tiredness in the legs from the exertions of the last four days in the mountains. Results were as follows: Bastian 18th, me 30th, Wilfred 62nd, Sasha 96th, Matt 120th.
Overall standings at the end of Stage 5: Bastian 30th, me 37th, Sasha 53rd, Wilfred 102nd, Matt 182nd.

Stage 6 – Risoul to Auron
Bastian put in a big performance for the Mavs today, hanging with the top riders across three major climbs to claim a creditable 10th place on the stage.
And it was no mean feat. After a cruise down to the valley from Risoul, the first challenge was Col de Vars, a two-step climb over 22km in distance and with 1,200 metres of vertical.

The peloton splits appeared almost immediately although the time gaps were not big and it meant the groups could eye each other’s progress up the initial sections of the mountain. Once we hit the flat section at the 12km mark the time gaps were converted to real distances on the road and Bastian disappeared with the leaders from the rest of the Mav contingent.

No chance to take a feed on top of Vars, only time to pull on a gilet or jacket and then a rapid descent, the road flattening out at the bottom to an undulating 10km section where having a group around you made a huge difference. Sasha, in particular, lost valuable minutes here as he found himself on a solo mission. 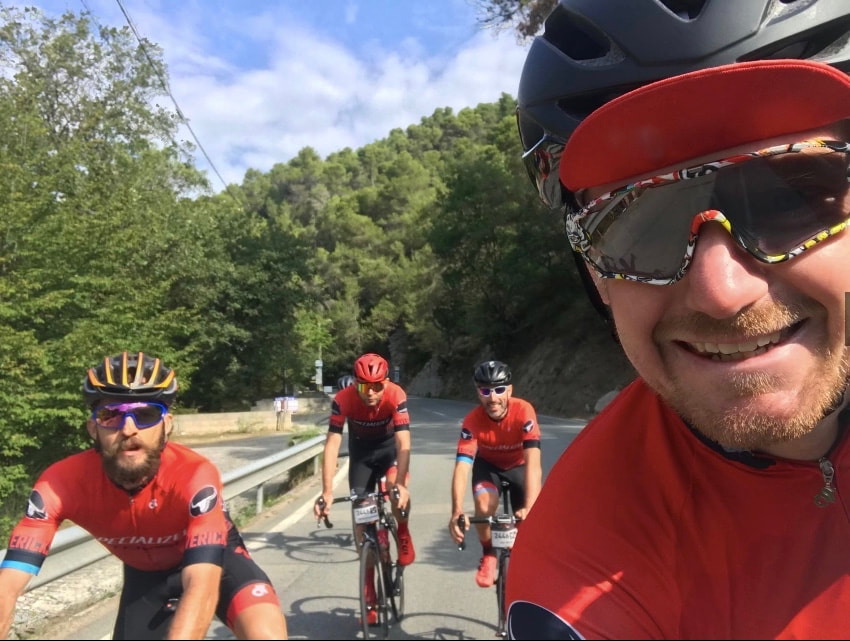 The big climb of the day can only be described as epic; there is no other word to describe it. Peaking at an altitude of 2,715m above sea level, the Col de Bonette is the highest paved road in Europe. It’s over 22km long and it rises 1,500m. The only saving grace is that the gradient is a rather constant 6.6 percent and, of course, the views are stunning if you’ve got the energy to look up from your stem.
​
It was a battle of individual willpower to crest Bonette but chapeau to the Mav riders who all conquered the climb. Many didn’t. Again, no time to feed at the top – it was straight back down the other side to Saint-Etienne-de-Tinee, an incredible descent of well over 25km, plus the luxury of an untimed section so riders could actually enjoy the view of some of the largest geographical features that the Alps have to offer. A chilly ride down from such an altitude, but stunning.

The final challenge of the day was a 7km section up to the finish at Auron. The last 5km was a struggle on tired legs. But we were greeted with a superb race village set-up, as it has been every day on this tour. Good food, shower facilities, an army of masseurs, plus our race bags transported to the finish and all hotel rooms pre-booked. The life of a (pro) rider, eh?

Stage 7 – Auron to Nice
The final stage of Haute Route Alps 2018 was a microcosm of the experiences and challenges faced by riders throughout the preceding week. First a chilly 35km neutralised descent, the entire peloton snaking it’s way down from Auron through the valley to St-Sauveur. The bravest went bare-legged and bare-armed but most of the peloton looked like they were about to start a freezing commute more than bike race to the Côte d’Azur. 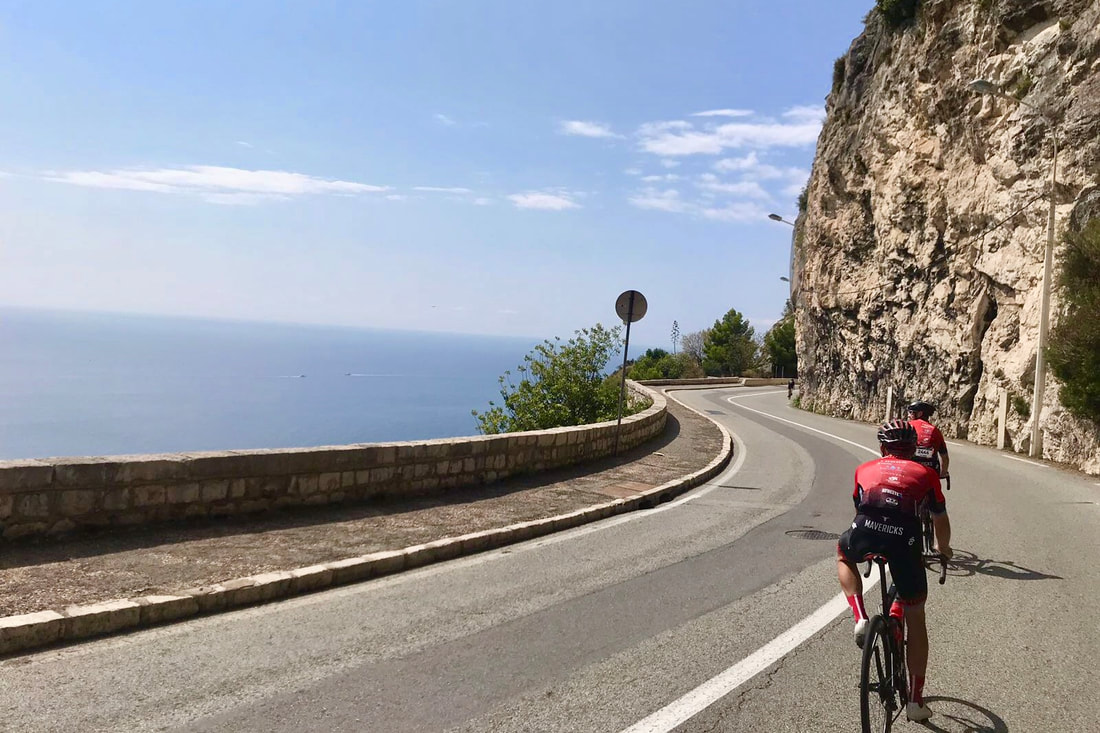 The Mediterranean Sea near Nice was a very welcome sight after seven days in the mountains
Any thoughts that the final day was going to be purely ceremonial were quashed when we hit the climb to Saint Martin. As with previous days, the pace was ratcheted up over the steep initial ramps and only the strongest and lightest riders were able to stick with the lead bunch over the 15km climb. A flat section at the 7km mark provided some respite but there was a big advantage to be gained from cresting the climb among the leaders and following the best descenders down a superb 40km drop to the town of Levens.

Once in the town, it was a short but occasionally steep traverse to the end of the first timing point and feed station coming at the 100km mark in the hills above Côte d’Azur. Only then could riders start to relax in the knowledge that they’d all-but-conquered the Haute Route. With just one 10km timed section remaining, a climb just outside Nice, it was time for warm congratulations, to shake the hands of fellow competitors, and to solidify friendships forged on the Alpine cols.

The cruise down from Tourrette-Levins towards Nice was celebratory, the sun now warming our backs and the sparkling blue sea in our sights. The final challenge was Col d’Eze and the Mavs gave it everything again, making a final bid for improvements in our GC rankings. The only remaining activity after the climb was a roll down towards the finish line on Promenade des Anglais, slap bang in the centre of Nice, surrounded by slightly bemused tourists and awaiting friends and family.

What an incredible event! Anyone who crossed the line in Nice knows the dedication it took to get there, the moments of doubt along the way, and the camaraderie that was exhibited on a daily basis by fellow competitors. 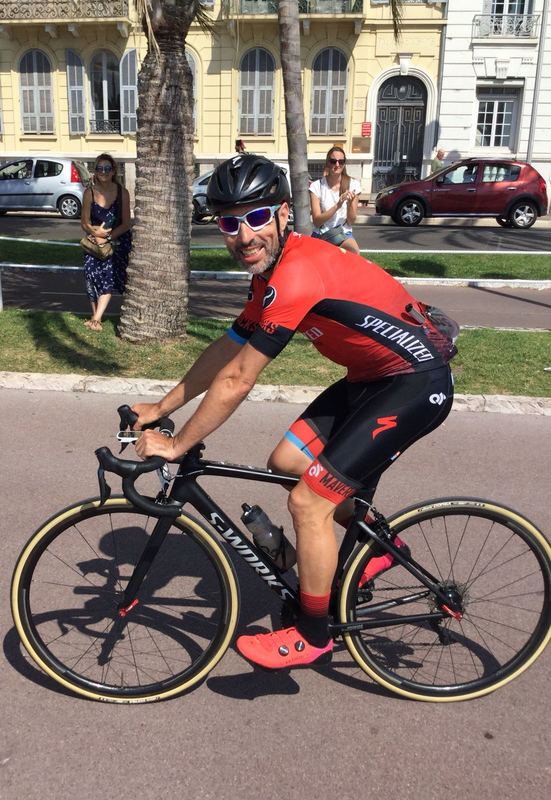 A happy Ben Arnott in Nice
​The final male GC standings showed Bastian in 21st place, Ben in 35th place (8th in 40-49 age group), Sasha 58th place, Wilfred in 100th and Matt in 187th place. There were 330 finishers in total from a starting number of 371.
​
With the assistance and support of some good friends from Athlete Lab, the team from Specialized Roval Mavericks Singapore gave it everything. We may not have alpine climbs to practice on back home, and our GC placings were perhaps a bit lower than we’re used to in our competitions in Asia, but we fought for every inch of tarmac, every summit, every wheel and every second. All five of us have renewed respect for the superstars of the sport who go up these epic climbs 33 percent faster than us mortals, and reach speeds on the descents 20kph higher than we can hope to attain. For any serious amateur cyclist seeking a week-long experience in the mountains, racing like the pros, it’s an event we’d strongly recommend.
Proudly powered by Weebly