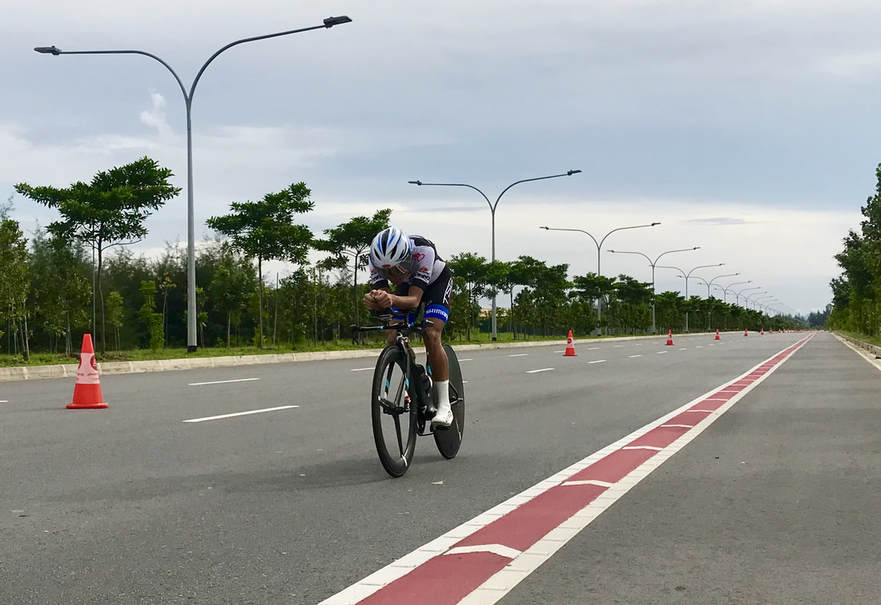 Goh’s win represented a hat-trick of national champ jerseys as it added to the individual time trial title he won in 2016 and his road race triumph last year, but for Choo, who is better known for her exploits as one of Singapore’s leading Ironman triathlon athletes, Sunday’s victory was her first national title at her first attempt.

The 2018 edition of the ITT national champs moved to the wide, open Tanah Merah Coastal road for the first time and the switch from the shorter Seletar North Link course of recent years proved to be a successful one. Some 250 cyclists and a big crew of officials and commissaries from race organisers Cycosports and the Singapore Cycling Federation began gathering at 5am for a morning of action that saw a clutch of national titles up for grabs.

The vast majority of the competitors faced three laps of a roughly 10.7km out-and-back course for a total test of 32.2km, while Singapore’s paracyclists and the Junior B (15-16 years) category raced either two or one rounds of the circuit. 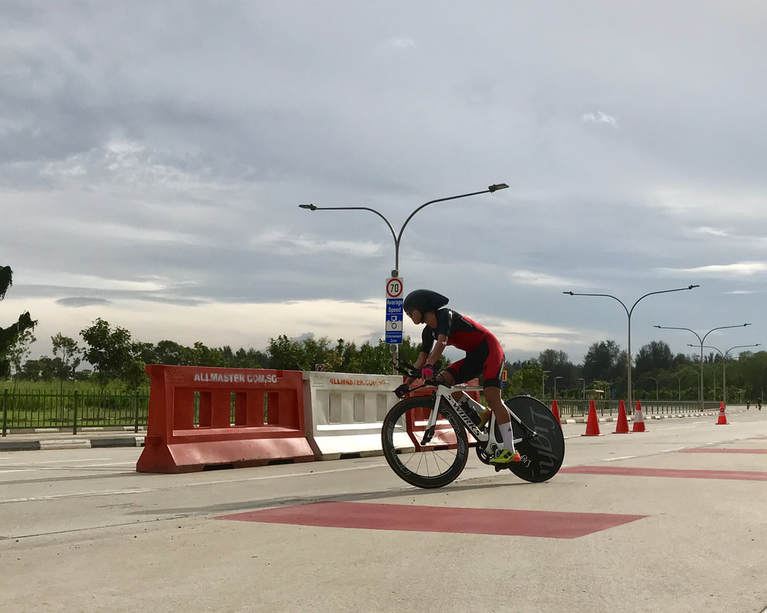 Women's champ Ling Er Choo takes taking the U-turn at the far end of the course
​The conditions were perfect for time trialling. With its dedicated on-road bike lanes, the pan-flat Tanah Merah Coastal Road is a favoured location for Singapore cyclists to train, but a strong head wind on one direction or the other is usually guaranteed. On Sunday, however, the racers only had to contend with a slight breeze, along with relatively cool temperatures.

The benign weather remained for the whole morning, a relief for the late-starting elite riders after a storm in 2017 saw the women’s race shortened and the men’s contest cancelled completely.

The elite athletes hit the course around 9am, with a big crowd of spectators and riders from the earlier age-group contests on hand to watch the action unfold. The athletes were set off at 1-minute intervals and so the multi-lap format of the race allowed for monitoring of time gaps at the end of laps 1 and 2. In the women’s race, it soon became apparent for those with stopwatches that Choo was the fastest on course; she covered the first lap in 15 minutes and 46 seconds, which put her 23 seconds ahead of perennial favourite Serene Lee (Maaslandster International Women’s Cycling Team).

While Choo is more accustomed to racing her bike over 90km or 180km at a lower power threshold rather than full gas over what must have felt like a “sprint” of 32km on Sunday, her many years of honing her craft mean she knows how to maintain a steady pace, which is the key to time trialling. And she demonstrated this perfectly by following up her first lap split with a nearly identical 15:47 for Lap 2. This saw her increase her lead to 60 seconds, but now it was from her “minute-women” Chelsie Tan (BikeLabz Racing), with Lee a further 5 seconds back. 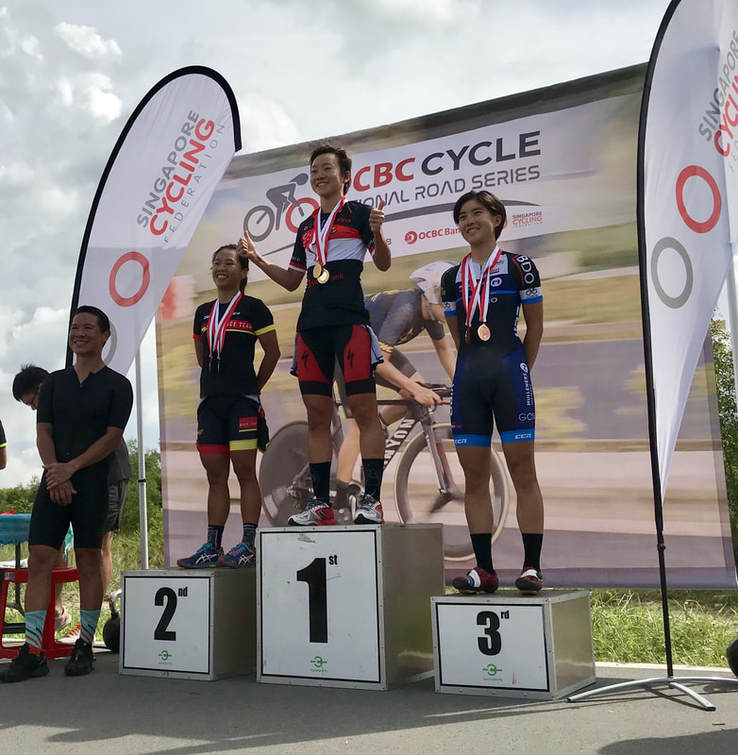 All smiles on the Women's Open podium
​A masterly third and final lap of 15:40 saw Choo overhaul Tan on the road and nearly catch Lee too. Her winning time was 47:13, a full 1:54 faster than silver medalist Tan, who earned that gong by just 1 second from Lee.

“It feels amazing to have won. I’ve been training very hard for it the past one month. I’m just glad everything went according to plan and I’m just trying to soak in that it's my first time winning a national champs,” she said.

We teased the new champ by asking if this success might turn her into a full-time cyclist.

“No, no, no,” she exclaimed with a smile. “This (cycling) is one third of what I usually train but I’m enjoying the journey of training for Kona (the Ironman World Championships in Kona, Hawaii) and the Asian Games ITT (in Jakarta next month). They are two months apart so it’s actually ideal for me to train on my bike for the Asian Games and then gear up or Kona.”

“But there are still a lot of things for me to learn, I’m new to ITT, I only started this year, but so far it’s a good experience for me,” Choo added. 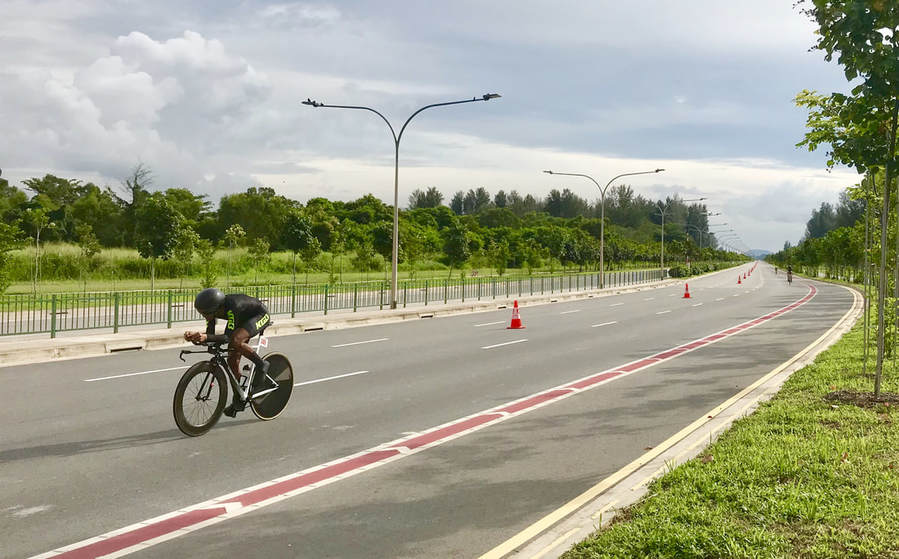 Dealton Prayogo's journey up from Jakarta was certainly worthwhile
​In the elite Men’s Open race, last-man-off Goh used a blistering fast first lap of 13:40 – the only time the 14-minute mark was breached all morning – as the springboard to his success.

Thanks to those 1-minute intervals, the athletes themselves can roughly tell where they stand in relation to most of their main competitors by monitoring the gaps on course in relation to the U-turns. While Goh would surely have known he had a big lead at the end of Lap 1 over those that started nearest to him, he might not have been aware of the rider who was actual his closest rival, Dealton Nurarif Prayogo (KGB Jakarta). The Indonesian man had started 17 minutes before Goh and had also put in a pretty fast first lap of 14:04.

​By adding splits of 14:22 and 14:09, it was Prayogo who assumed the metaphorical hot seat midway through the race with his finishing mark of 42:35; upon getting off his bike he waited anxiously in the live results tent as he watched the real-time updates appear on the screen.

But Goh was still flying out on the circuit and by the end of Lap 2 had even hauled in two of the three riders who had started immediately before him. He finished off a dominating performance with another blistering lap of 14:06 and he punched the air triumphantly as he crossed the finish line to retain his mantle of ITT king of Singapore.

Goh’s winning time of 41:56 (representing an average speed of 46kph) gave him a margin of 39 seconds over Prayogo. Joining them on the elite podium was the third-place finisher, Ben Arnott of the Specialized Roval Mavericks. Aged 47, the British banking executive was eligible to have entered and won either the Masters or Super Masters categories, but he showed that age doesn’t matter if you’re good enough to mix it with the young guns. 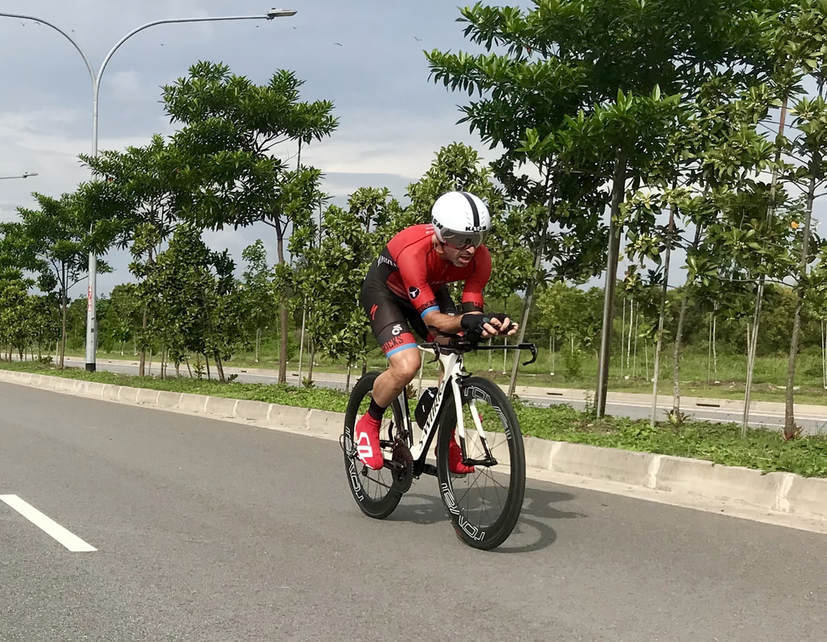 “I trained hard for it. I knew it was quite to be competitive this year so I had to step up my training a lot more. I gave it my all and I guess the results show that and so I’m happy with the result,” the man popularly known as Ah Huat said.

He’s already looking forward to this Sunday’s road race nationals where he hopes to retain his title.

“Hopefully I can do the double, but I’m not too sure looking at the (quality) of the field. But that course (in Nongsa, Batam) suits me so I think I can do well there,” he said. “I’ve got four Terengganu teammates coming down to help me so we will give it a good kick.”

As for whether he'll be going for the hat-trick of ITT titles next year, Goh answered with a laugh.

“I’m not too sure man, hopefully I’m still racing. But I’ll do my best.” 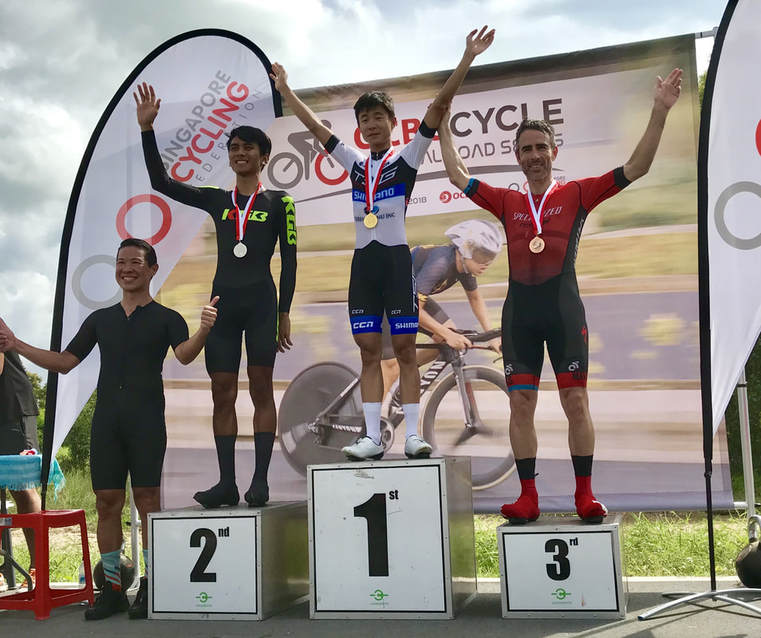 The Men's Open podium
The OCBC Cycle Singapore ITT National Championships are held under the auspices of cycling’s global governing body, the Union Cycliste International (UCI). In addition to the elite titles of each country, the UCI also recognises the champions in the Junior A (17-18) and Masters (35-44 years) categories.

Taking the title and the national champions jersey in the male Junior A race on Sunday was Jie Yu Moh (TWC Racing) with a winning time of 46:43. The runner-up Jack Grant (Specialized Roval Mavericks) finished 29 seconds back, with Shu Hong Lim (TWC Racing) rounding out the podium in third. Patricia Orenza (PBB Cycling Team) won the female Junior A race unopposed, but as she is from the Philippines, no national title was awarded.

​The Men’s Masters contest saw a clean sweep from team MatadorRacing, with the top step on the podium going to the Malaysian rider David Cheam Dow Wei thanks to a winning time of 44:38. The intra-team contest for glory was a close-run thing, though, as runner-up Benedikt Schneider of South Africa finished just 2 seconds back. Michael Naert from Belgium rounded out the Matadors podium in third. The leading Singaporean and hence Masters national champion was the fifth-placed Choon Kiat Poon (BikeLabz Racing). 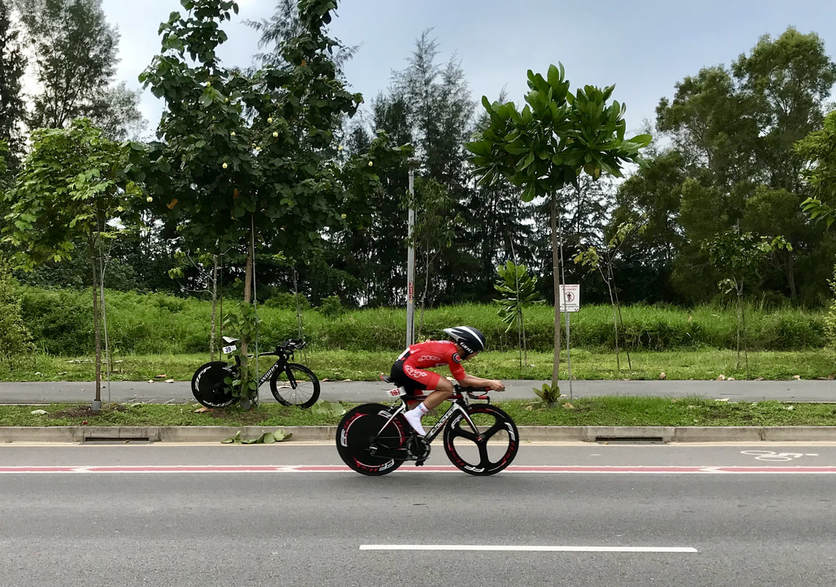 Masters winner David Cheam looking appropriately fast
​In the Women’s Masters event, a mark of 50:53 saw Sarah Schneider (MatadorRacing) win the race, but being South African, Schneider was ineligible to win the actual national championship. Neither was the runner-up and only other starter Stella Chen He of China, meaning no national title was awarded.

The other races on the day’s program may not have had official UCI status, but for those racing them, they were still prestigious affairs and awarded national champion jerseys to the winners.

Only a male national championship was held in the Veterans (aged 55+) category, and the winner was Matthew Sheridan (4T2) with a time of 49:30. Joining him on the podium were Ian McDonald (Joyriders) and Jonathan Earnshaw (Team Absolut). As none of the first three were Singaporean, the national title went to the fourth-place finisher Jeffrey Keng (Cycleworx).

Billie Mah (Integrated Riding Racing Team) took the title in the boys Junior B race thanks to a time of 33:15 for his two laps of the circuit. The runner-up was Malcolm Tan (Crank Dynasty SG) with Julius Tangit (TWC Racing) taking the bronze medal. There was only one girl entrant in the Junior B cat, but it’s worth noting that the 35:25 mark recorded by the champ Elizabeth Liau (Cycleworx) would have been good enough to take third place in the boys race. 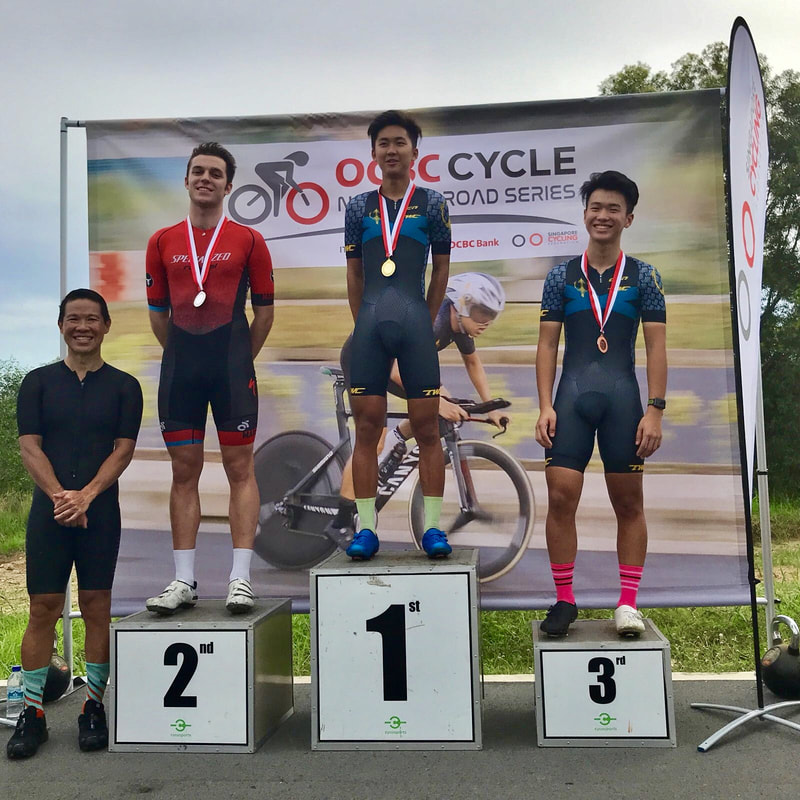 For full results of the 2018 OCBC Cycle ITT National Championships, click on this link.

The action moves onto the OCBC Cycle National Championships Road Race this coming Sunday, July 8. In a first for Singapore cycling, the nationals are being held off-island in nearby Batam, Indonesia. The decision to move the prestigious races overseas is a reflection of the logistical difficulties in securing a suitable venue in Singapore. The challenging 12km Nongsa circuit in Batam should produce a batch of worthy national champions.
Proudly powered by Weebly