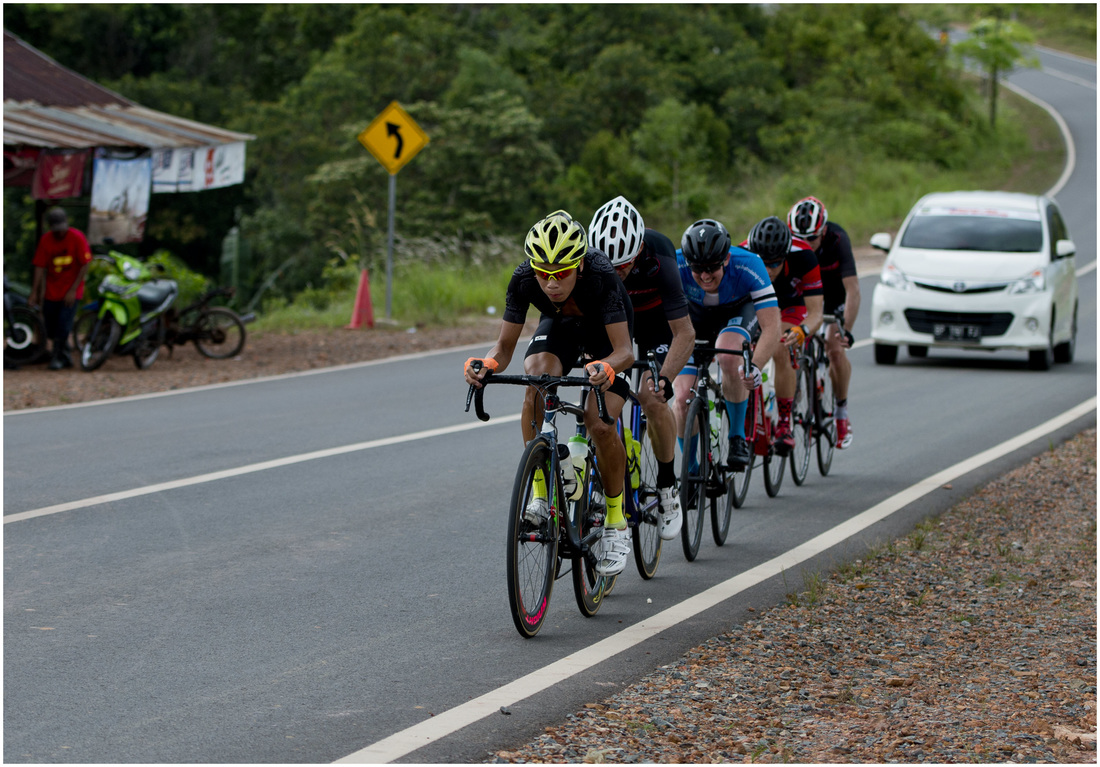 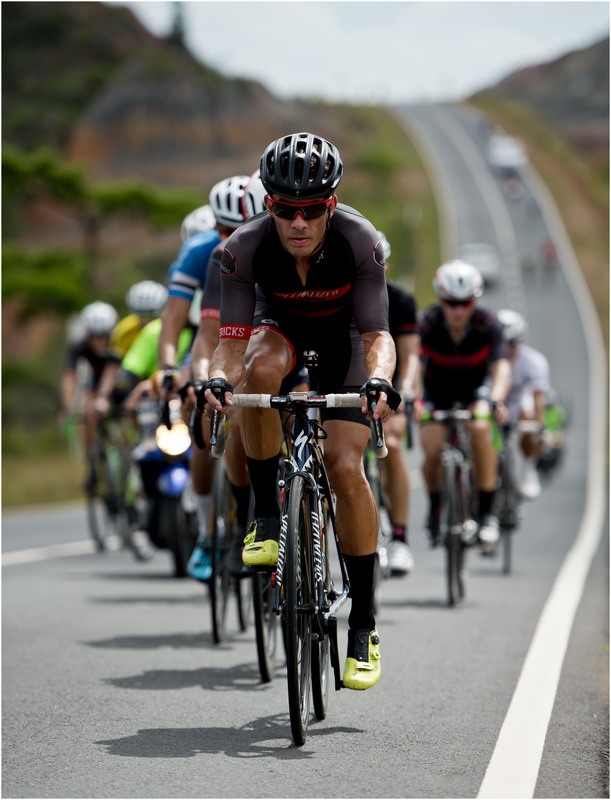 In what was a day for the breakaways at the 2016 Cycosports Tour de Barelang, Ho Jun Rong (JR Cycle Racing) won the elite Cat 1 contest in impressive fashion with a series of attacks in the closing stages that methodically dismantled the nine-man group that had led the race for much of the morning last Saturday (May 14).

Jacob Wissum (Arrivo Prima Singapura) took the Cat 2 title after outlasting his two breakaway partners on the sprint finish up the Barelang Bridge. Geoffroy van Humbeeck (The Cranks) was the Cat 3 champion as he emerged the strongest from a seven-man lead group and Andrea Ferschl (Anza Cycling) took the crown in the Women’s race.

While the Tour de Barelang takes place on the Indonesian island of Batam, it is in fact one of the key events on the Singapore road racing calendar. As such, the vast majority of the 200-plus competitors for what was the fourth edition of the race gathered before dawn at Singapore’s Harbourfront Centre before boarding two chartered ferries for the short trip to the port of Sekupang on Batam.

Major maintenance works at the far end of the Barelang Highway (the road that gives the race its name) forced an alteration from the usual route in the shape of an out-back-section to the village of Galang. Post-race the general consensus was that the detour enhanced the route, but pre-race it gave Cycosports some logistical problems that eventually resulted in the decision to have the Cat 2 contest start 20 minutes before Cat 1. As the Cat 2 and Cat 3 pelotons were much bigger than the Cat 1 group (where only 27 of the 36 registered riders started), the unusual decision was made to ensure the two biggest bunches were not coming at each other from different directions on the relatively narrow roads that the detour featured.

So as the 80-strong Cat 2 bunch got things going at 7:55am on what was a slightly overcast Saturday morning, the elite riders had to patiently wait their turn to race. Once unleashed at 8:15am, however, the fast boys wasted no time and were soon negotiating the 12km “neutralised section” at speeds in excess of 40kph. Traditionally, the race doesn’t really get going until a right turn onto the Barelang Highway after 16km, and the pace duly went up another level at this mark resulting in some of the backmarkers hanging on for grim death even at that early stage in proceedings.

The crazy speeds meant anybody losing contact with the group was in for a long lonely day, and such a fate was on the cards for one of the pre-race favourites Ben Arnott. The Specialized Mavericks rider was hoping to the do the Batam double after winning the Cycosports Nongsa Challenge earlier in the year, but a rear wheel mechanical just before the mighty Barelang Bridge, the first of six spans on the route that gives the event its alternative name, the Batam Six Bridges race, put paid to his chances. Minutes later he was joined on the side of the road by Michael Naert (SwiftCarbon-Virgin Active) and the pair ended up riding a two-up time trial for much of the rest of the day.

Up ahead, an 11-man break formed just before the Bridge #3 and while there was still some 100km of the 130km total race distance to go, it was immediately clear that a group this size and containing riders from all the big teams had a chance to make a big impression on the race if the riders decided to cooperate.

Joining Ho in this group were the Allied World-CCN duo of Adam Nelson and Hish Scarf, Michael Koreneff and Brian Johnsen of SwiftCarbon, Wai Mun Yeong and David Gowty from CyclingTraining.Asia, the Specialized Mavericks trio of Nick Swallow, Youcef Cummings and Tim Clarsen, and James Lau of Team Integrated Racing.

The move looked like it was being slowly reeled in about 10km after it started, but perhaps sensing the fast-charging peloton, the breakaway found a second wind and before too long was out of sight. The pace proved too high for Yeong, but as he dropped back to the peloton, he was replaced in the breakaway by Wesley Hughes, the Team Integrated rider putting in an unbelievable solo effort to bridge the gap.

The detour came at the 49km mark in the shape of a left-hander that took the racers on an undulating trip to the east coast and back. The next 25km was new territory for most of the racers, but the surface was good and the police outriders were doing their usual sterling effort of sweeping the route ahead to stop any oncoming vehicles disrupting the race.

Not long into the new section, the two Integrated Racing riders in the lead bunch saw their chances of glory end when on an innocuous corner Hughes lost control and slid off the road into the bush taking his teammate Lau with him. While unhurt, both suffered from front wheel punctures and their time in the breakaway was over.

The remaining nine continued to work as a cohesive unit and just after the turnaround at Galang, the sight of the peloton coming the other way revealed they had a lead of around five minutes. 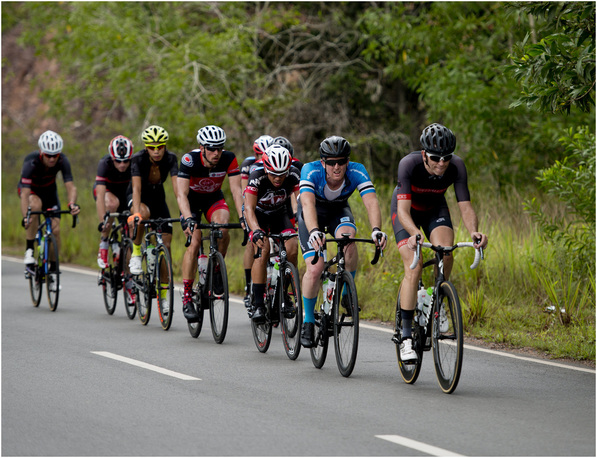 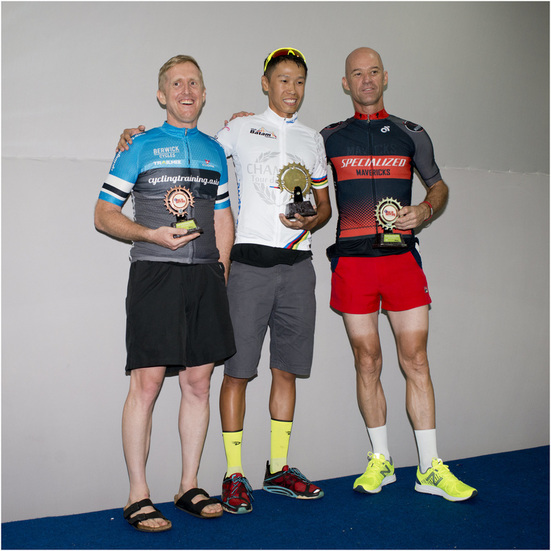 Detour completed, the route took the racers back on a southerly course down the Barelang Highway, with the breakaway’s next target being the u-turn just after Bridge #6. This marked 90km done and the run for home. With the peloton reaching that same point over five minutes later, it was looking increasingly likely that the winner would come from the escape group, where every rider was still taking his time in the wind.

However, the change from tight, cohesive group to a splintered string of riders came suddenly and dramatically. The road rolls incessantly for the final 20km of the route and when the inevitable first probing attack came on one of the longer inclines, gaps quickly appeared which left some of the riders scrambling to stay on.

Perhaps sensing that now was his moment, Ho put in a series of attacks on each little rise and the tactic worked like a charm. First to pop was Nelson, with Scarf and Koreneff following shortly afterwards. The last six soon became four when first Swallow then Clarsen couldn’t match the pace being set by Ho on the rollers.

From being a solo rider up against various combinations of teammates, the odds favoured Ho much better now, and the former pro with the OCBC Singapore Continental Cycling Team continued to make things hard for his remaining partners, Gowty, Johnsen and Cummings. The attrition continued, though, with Johnson the next to crack, and while Gowty and Cummings hung on bravely for a while, the elastic eventually snapped.

Free of company, the young Singaporean then went into TT mode and pressed for home, with the gap to the “pursuers” growing larger as each kilometre elapsed. By the time Ho rolled triumphantly over the finish line on the Barelang Bridge he had put 80 seconds into the eventual runner-up Cummings, who himself dug deep to outsprint Gowty up the slope to the line. Johnsen hung on for fourth, and a late attack from the peloton saw Yi Peng Teoh and two of his Specialized Mavericks teammates overhaul most of the rest of the spent breakaway riders to clinch the Cat 1 team title for the Mavericks.

“I didn’t really have a tactic as everybody in the group was just pulling equal turns and with nobody instigating any attacks I didn’t know the performance level of the other riders. Then some of the Matadors (SwiftCarbon) riders started to attack and from that I could see that some of the other riders were starting to crack,” he said.

“I knew that if I attacked on the flat that everybody would be on my wheel, so I saved energy and waited for the rollers. When we hit the steeper slopes where there was no drafting effect I kept attacking. I did that repeatedly for maybe 10 times or so.”

“I guess it might have been expected of me to win but it wasn’t easy. I was honestly dying those last few kilometres when there were a few really sharp kickers because I’m not really a good climber, so that really broke my momentum. If you see me getting out of the saddle it’s not good.”

Cycosports and Singapore cycling in general can only benefit if races can attract riders of the caliber of Ho, who has been absent from the scene recently.

“After I stopped racing at the Continental level I didn’t really do much racing for the last two years. I was focusing a lot on setting up my business, so that was my main priority … and getting married,” Ho revealed.

Next up for Ho are the Singapore National Championships on May 22 and 29.

“I’ve been training for the time trial mainly to defend my crown. I’ll see how it goes, I don’t know how my form is for TT,” he said.

If the way he soloed home at the Tour de Barelang is anything to go by, his rivals for this Sunday’s TT race should be worried. 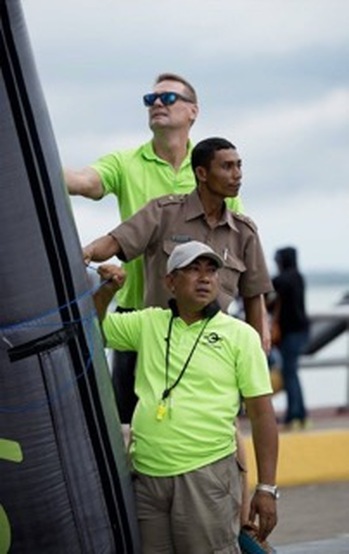 Earlier, the Arrivo Primo Singapura (APS) riders put in an impressive all-round performance to help their leader Wissum take the Cat 2 crown. Using their big numbers, the APS men made the race hard from the start, setting up Wissum to launch his first significant attack just after Galang village in the new section of the course. The Dane stayed away on his own for some 10km before being reeled in as the race re-entered the Barelang Highway. That setback did nothing to his resolve or power as he still had the legs to attack again late in the race.

When he kicked with 30km to go he took four riders with him, but ultimately only two could stick with him, Jonathon Curry (R&D Speedshop) and James Clark (Specialized Mavericks). Wissum has an impressive record as a triathlete, but it turns out he can ride a road bike too, and on his racing debut for APS, unleashed a powerful sprint on the finishing climb to pip Curry for the win, with Clark rolling in a few seconds later for the final podium place. The fast-charging peloton hit the bridge some 50 seconds after the lead trio, with Clark’s teammate Craig Cameron, the defending Cat 2 champion, taking the bunch sprint for fourth from Lukman Nurhakim Noordin (Ascenders Team).

APS took the Cat 2 team title by 1 second from the Mavericks.

The combined Cat 3/Women’s peloton was the biggest of the day, and the men’s race was decided from a breakaway featuring seven riders. For much of the run in, it was anybody’s guess which of the septet would prevail, but in the end Van Humbeeck made it look quite easy, powering away to take the win by over 20 seconds. The runner up was Chucke Espiritu (West Coast Riders), with Marcus Hancock (The Cranks) in third.

The Women’s race sadly only featured five competitors and none of that quintet managed to infiltrate the men’s breakaway. Still, Ferschl, her Anza teammate Kari Nore and Christina Liew (Treknology Cycledelic) rode strongly near the front of the big peloton for most of the race. Ferschl had the best legs in the finale to take the win, from Nore in second and Liew in third.

The Tour de Barelang is traditionally a one-day event, but for 2016 Cycosports added an extra day and staged a Cat 4 race and Gran Fondo on the Sunday. Over 100 riders took part in this shorter and more laid back event.  The major honours went to Roderick Wiles (Barbarians REVSIN) who took the Cat 4 race, outlasting Ian Roberts on the bridge sprint. Local rider Ragil Yulianto (MCT Bintan) took third place and the final podium spot. Barbarians REVSIN were the winners of the Cat 4 team contest.