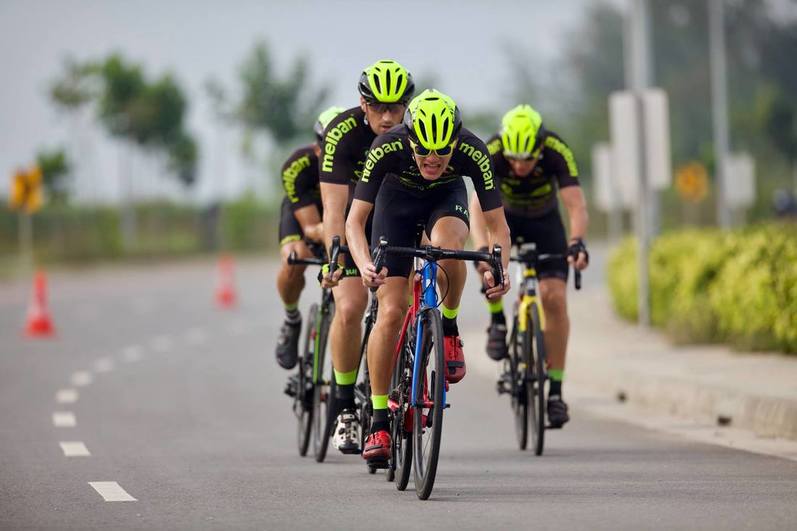 All photos courtesy of Ling Er Choo unless otherwise stated
April 3, 2018
The OCBC Cycle Singapore National Team Time Trial Championships returned to the Tanah Merah Coastal Road on Sunday on what was a gala occasion for the Singapore road cycling scene. Many winners were crowned throughout the six hours of racing, but a quartet from the Allied World Kemp Technologies team claimed the most prestigious title when they swept to victory in the Elite Men’s Open Quad category. In the Elite Women’s Quad, it was Anza Cycling who took the honours.

The Allied World foursome of Pierre-Alain Scherwey, Donald McDonald, Adam Nelson and Peter Bennett covered the 32.4km course in 41 minutes, 21.71 seconds, a time that represented an official average speed of 47.4kph and which gave them a 9-second margin over the runners-up from the Specialized Roval Mavericks. Taking the bronze medal in what was a closely fought race where the first four teams were separated by less than 15 seconds, was TWC Racing; the MatadorRacing foursome was the unluckily squad to miss out on the podium.

The sidelines were packed with fans, friends and families, and racers doing their prep
While nine squads competed in the Elite Men’s Quad category, a further 105 teams did battle for the other 13 Quad and Duo titles that were up for grabs. That’s an astonishing number of cyclists and shows the rude health of the sport in Singapore.

The riders started gathering at 6am and the early birds witnessed the staff and volunteers from event organisers Cycosports and the Singapore Cycling Federation (SCF) as they gallantly rushed to get the race site operational for the scheduled 7:15am start.

Road Cycling events have been historically difficult to host in Singapore, the main problem being the cost and red tape associated with obtaining road closures. Indeed, permission to use the Tanah Merah Coastal Road was only secured for six hours yesterday’s racing, and with limited pre-event access granted to the organising team, they did a great job of getting the show running with only a short delay.

By the time the first riders were flagged off, the start/finish area running parallel to the road was lined with dozens of team tents, all packed with competitors and supporters, and a festive vibe prevailed. The weather also played nice, with the rain staying away and cloud cover keeping the temperatures relatively cool. The wind did pick up a bit as as the morning progressed, but that would have been no surprise to any of the racers, most of whom no doubt frequently train on the wide-open and long straights of “Coastal”.

The race program featured multiple Quad and Duo categories but these were also further split into Elite and Sports divisions.

Competitive road cycling is governed by the Union Cycliste International (UCI), of which the SCF is a member. As yesterday’s event was a national championships, the UCI’s somewhat strict regulations on bike measurements and race licences had to be adhered to; in the past this has ruled out a lot of local cyclists from competing, especially triathletes whose super-aerodynamic rigs more often than not fall foul of the regulations.
But like last year’s TTT nationals, the 2018 event featured Elite and Sports categories. To compete in the former, participants were required to hold a current SCF racing licence and their bikes had to be UCI compliant (they were measured by race commissaries pre-race on a special jig). However, for the Sports categories, any road/triathlon bike could be used and and no race licences were required.

The success of this common-sense and inclusive strategy was apparent by a simple look at the numbers: of the 114 quad/duo teams that took part, 71 (or 62 percent of the total) competed in the Sports cats.

The Quads started the day’s program, with the Elite categories followed by the Sports. In all 66 four-person teams hit the Tanah Merah Coastal Road circuit, each tasked with completing three laps of the 10.8km out-and-back course. A distance of 32.4km might not sound like too much, but it would be hard to find many participants yesterday who didn’t feel the pain. The 48 Duo teams followed for their two laps, or 21.6km, of effort. 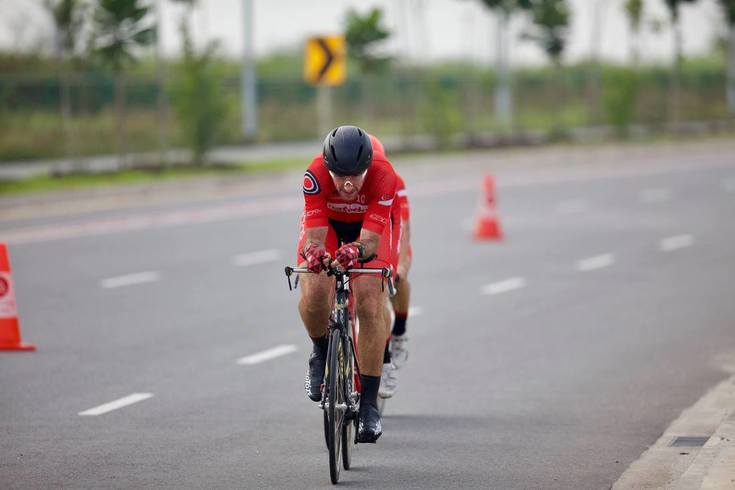 Super-tight, wind-cheating formations can make a team seem like just one rider
The rules for a TTT are fairly simple. Each team has to cover the prescribed race distance in the fastest possible time. It’s not just about pure power, though. As the discipline’s name implies, teamwork is the key to success, whether that be for quad or duos teams that raced in Singapore yesterday, or at the eight-man TTTs in the Tour de France and other pro stage races. Consistent pacing, smooth changeovers and the ability to keep all the riders together for the duration of the race are all significant factors in team time trialling.

For the Men’s and Women’s quads at yesterday’s Singapore nationals, it was the third riders from each team over the line that counted. This allowed for mishaps such as punctures, crashes, riders veering off course at the u-turns and people just having a bad day (all four occured yesterday). In the mixed quads, though, where the teams had to include at least one women, the clock didn’t stop until all four riders had crossed the line. Similarly, in the Duos, the times for both riders counted.

The Elite Men’s Masters Quad (for riders aged 35+ and up) followed the Men’s Open onto the course and a popular winning team emerged from that contest in the shape of Cycleworx. The quartet of Ting Yong Neo, Varian Tan, Woon Lip Teo and Jason Yeo recorded a time of 43:08 to win comfortably from the runners-up, the Specialized Roval Mavericks. MatadorRacing rounded out the podium in third.
Next up were the Elite Women, where unfortunately the winning Anza Cycling ladies team of Megan Kinder, Lizzie Hodges, Rachel Dubois and Juliane Winzer had no competition. There winning time was 51:42, but there’s no doubt they couple have pushed harder had they had other teams chasing them. There wasn’t a lack of women cyclists at the event yesterday, but the vast majority took part in the Sports or Mixed categories. Let’s hope more of the ladies will step up to the Elites next year.

The Elite Mixed Quad completed the first round of events, with BikeLabz Racing (Brian Johnsen, Chung Poon, Chelsie Tan and Lucas Lee) taking the win from Cycleworx and TWC Racing. The BikeLabz team’s time was 45:12, giving them a 12-second winning margin.

The Sports riders were next on course, starting with the Men’s Sports Quad Open, where 16 teams did battle. The top triathlete squad of Arrivo Primo Singapura 1 were the champions, but interestingly the winning time of 43:38 put up by Tim Cosulich, Nikolai Jenkins, Ben Heckscher and Francois Verlaine wouldn’t have cracked the top six of the Elite Men’s Open standings. New Moon KH Cycle A were the runners-up, with APS2 in third. 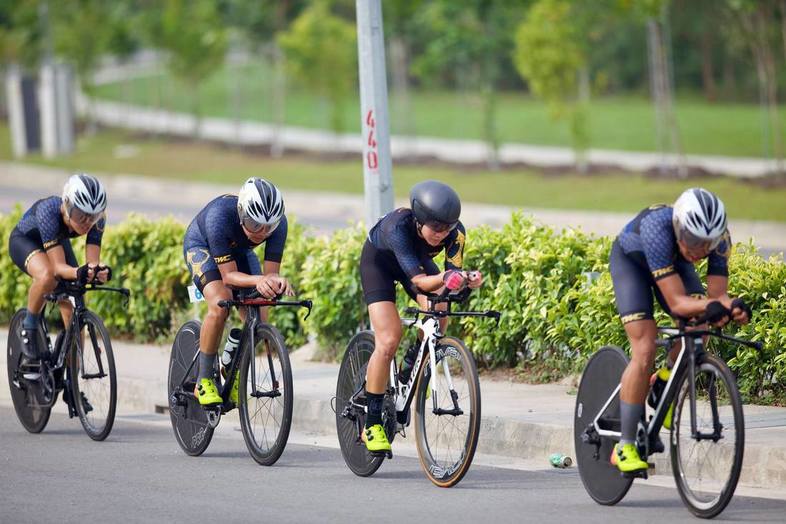 The youngsters of TWC Racing were one of many clubs to field multiple teams on Sunday
On the other hand, the 49:15 winning time of the victorious Quadzilla team (Megan Gray Vanessa Lodge, Elaine Young and Elvia Suryadi) in the Women’s Sports Quad would have beaten the Women’s Elite winning mark. Second place went to West Coast Riders Women, with RADstation rounding out the podium.

Taking the Men’s Masters Sports Quad title was the team from Team Absolut. The winning quartet of Jon Earnshaw, Andrew Fang, Shem Leong and Alistair Reed covered the 32.4km distance in a time of 45:53 to give them victory over Les Chercheus D’or in second and NE17 in third.

The Mixed Sports Quads category was the biggest in term of participation, with 17 teams racing. Forever 18 (Jansen Her, Joanne Mak, Moses Shao and Sebastian Teo) emerged victorious with a time of 46:22. Integrated Riding Racing Team 1 were second with 30Forty Mixed in third.
Duos
The two-up racing got underway mid-morning with the Juniors, who were split into Juniors A (17-18) and Juniors B (13-16).

YBCO Racing Team took the Juniors A title, as Jin Yi Toh and Jared Wong recorded a winning time of 32:27. TWC Racing were the runners-up, with the Mav Development Team rounding out the podium.

The Juniors B race was won by Team Neiled It (Jian Li Wong and Boon Cheong Yeo), whose time of 36:06 gave them victory over Team Fabian Junior Boys and 30Forty Cycling.

Next up were the Elite pairs, with most of the participants having already taken part in a quad earlier in the morning. The Elite Men’s Open Duo title went to the twosome of Michael Naert and Ben Farnsworth of MatadorRacing Y. Their time of 29:05 gave them a winning margin of some 20 seconds from teammates MatadorRacing X. The podium was rounded out by the colourfully named Begedil & French Fries. 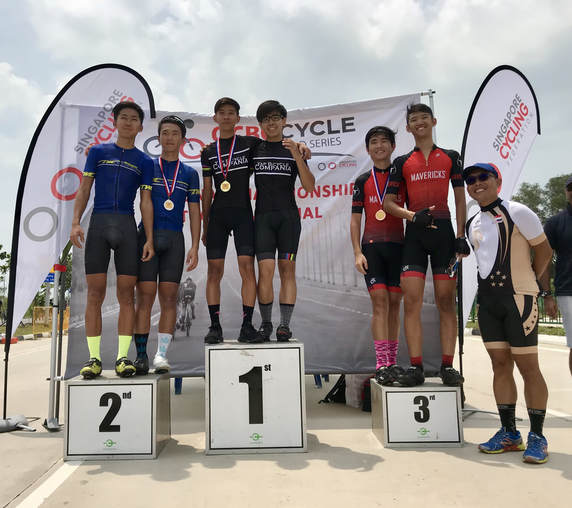 The Juniors A podium (photo: Flat Spoke Media)
In the Elite Men’s Masters Duo, the Specialized Roval Mavericks swept the podium with Mav Haste (Ben Arnott and Andreas Ostern), Mav Unit and Mav Classic taking the 1, 2, 3. Arnott and Ostern’s winning time of 28:38 was the best duo mark of the day, some 27 seconds faster than the Elite Men’s Open.

The Elite Women Duo was again marked by poor participatory numbers, but at least two teams entered this race. The winners were the Integrated Riding Racing Team pairing of Jacqueline Kolb and Jennifer Zenker, who set a time of 31:43. SmileAsia Women took the silver medal. Special mention to one of the SmileAsia ladies, Ling Er Choo, who rode three races yesterday – a Duo, a Quad and an individual time trial (a special ITT test race was held before the TTT to give members of Team Singapore the opportunity to set times for UCI qualification purposes).

The final Elite title awarded yesterday was for the Elite Mixed Duo and that went to the Cycledelic Chinchillas, a pairing that contained none other than SCF president Siong Chen Hing and his wife Lynette Ngo. It was a close-run contest, with their time of 32:50 proving to be just 6 seconds faster than the runners-up from Kampong Games NMKH. The twosome of Commonwealth Games rounded out the podium places. 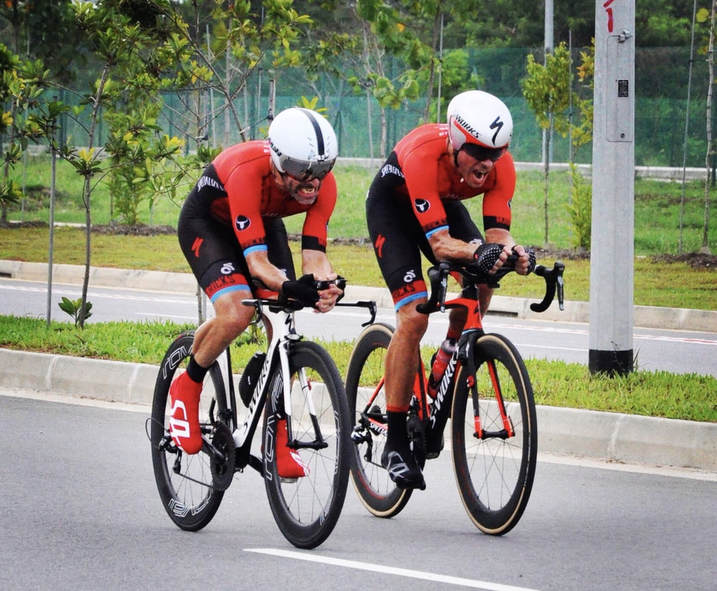 Arnott and Ostern of "Mav Haste" sprint for the line to finish their best-of-day effort (photo: @Oldish888)
The non-licensed/triathlon bike duos were the last group to race yesterday, starting with the Men’s Sports Open. Clear victors in this category were the 4TTT2 pair of Mark Jansen and Andy Fleming, who set a scintillating time of 28:51. This was the second-fastest split of the day across all the Duo categories including the Elites. Behind 4TTT2 was Team Midpoint, with RoadBrothers in third place.

The Men’s Sports Masters Duo contest was won by the Kopi Bros (Francis Yeng and Ray Ng) with a time of 31:36. TriEdge TT P&R were the runners-up, with 30Forty Master X in third.

The last of the 14 titles to be awarded on what was a busy day for the SCF prize presenters was for the Mixed Sports Duo. The champions were the TriEdge Team A of Michael Lyons and Anna Willet, with a time of 33:06. The Pedestrians took the silver medal, with TMC in third. 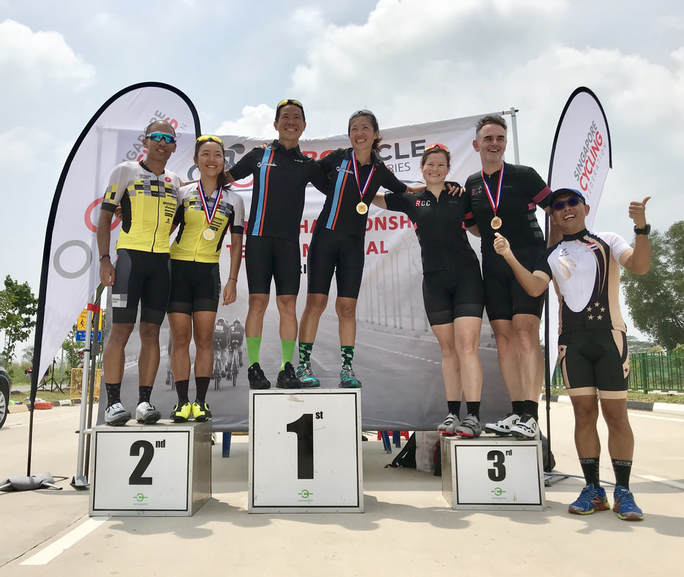 Keep an eye on the Cycosports and SCF social media feeds in the coming weeks for news of those prestigious events.
Proudly powered by Weebly