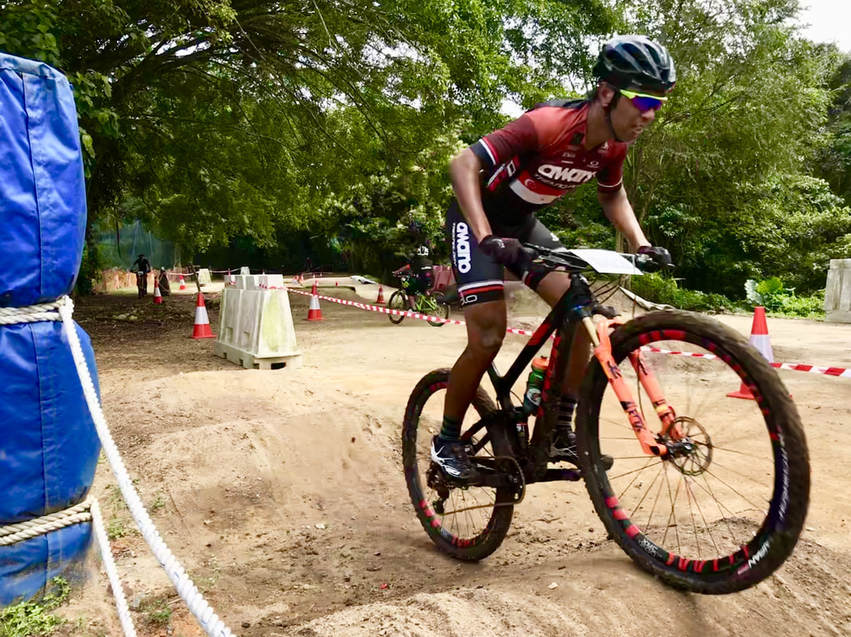 Junaidi does it again as Jungle Cross makes 2018 debut

February 5, 2018
The off-road cycling series Jungle Cross returned to Singapore’s Turf City yesterday on a newly revamped course at the Centaurs Trail, but the result in the elite Men’s Open mountain bike race was a familiar one as the evergreen Junaidi Hashim (Team Awano) took the victory over his young protégé Riyadh Hakim.

A joint venture between cycling events outfit Cycosports and the Centaurs Sports group, Jungle Cross has been a resounding success since making its debut with a test event late in 2015. The five rounds of racing that make up the series each year take place in and around the Pit, a heavily wooded ravine at the centre of the Turf City sports and leisure complex.

Around 100 racers and their bikes ventured into the Pit yesterday and with a similar amount of spectators and supporters on the sidelines, Jungle Cross I perfectly demonstrated the healthly state of grassroots cycling in Singapore.

The action kicked off at 8am with the competitors from the Cyclocross Open, Men’s and Women’s Sports MTB, and the Juniors B (for 13-16 year olds) starting two minutes apart as they tackled the short version of the Jungle Cross track. Less technical than the full-length circuit faced by the more seasoned mountain bikers later in the morning, the 2.4km short course largely hugged the perimeter of the Pit but also delivered a few forays down into heart of the ravine. A largely wet start to 2018 meant the course was good and muddy even before the first knobbly tyres hit it. 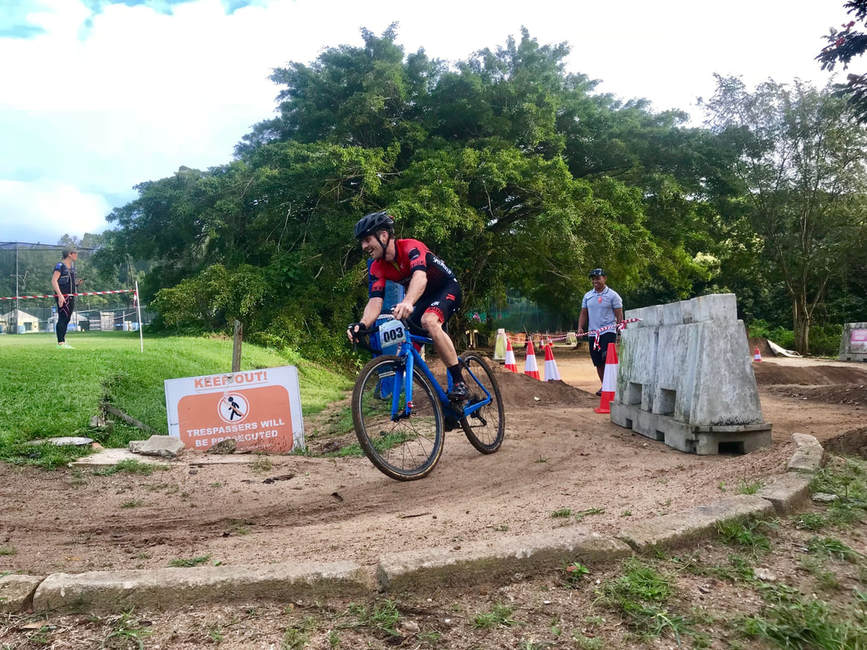 Bastian Dohling exits the mini pump track during the CX race
In the Cyclocross race, a group of four riders shot out from the gun and quickly separated themselves from the rest on the fast playing field section of the course. There was little between veterans Mike Koreneff (Allied World-Kemp Technologies), Rob Lamb, Bastian Dohling (Specialized Roval Mavericks) and CX rookie Anand Chandran as they entered the ravine, but by the time they re-emerged from the jungle at the end of Lap #1 of four, Koreneff had a handy lead over Lamb, with Dohling further back in third.

However, there was a new leader in the shape of Dohling after the completion of Lap #2, closely followed by Lamb, with Koreneff way behind and forced to run his bike out of the jungle after suffering a puncture. The Aussie’s misfortune was the first of many flats and mechanicals that affected the morning’s action, but such mishaps are part and parcel of off-road racing.

Dohling took full advantage of Koreneff's troubles and rode strongly for the remainder of the race, steadily pulling away from Lamb to take the win in a time of 46 minutes and 14 seconds. Claiming third place and the final step on the Cyclocross podium was Andrew Fang. 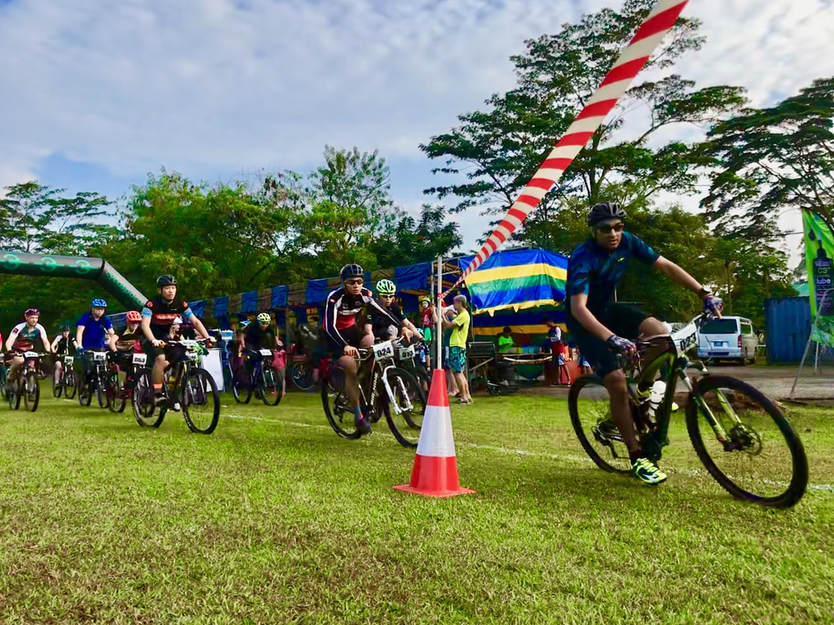 The fastest short-course mountain biker, however, was Juniors B winner Umar Hasbullah (Ride Reaction). The youngster completed dominated his field to win in a time of 43:46.  Syarf Haqqani Teguh (Northern Rider) was way back in second, with Abdul Haziq Johari (Team Harding) in third. 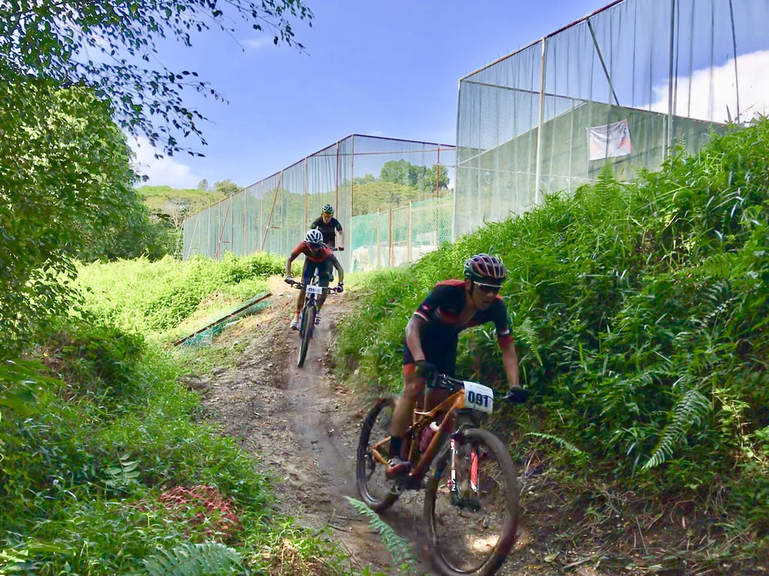 Cross-country action as the Masters racers head into the Pit
The All-Mountain MTB category – for bikes with at least 130mm of travel – was next on track a little after 9am. The All-Mountain racers faced three laps of a circuit similar to the short course but with the addition of a few gravity-pleasing enhancements. The All Mountain champion was Ian Krempl (#unsprungsg), who pulled away on the last lap from Faroz Marzoki (Team Trail+) to take the win with a time of 36:32. Mohamed Shafiee (Team Harding) was third.

Last on track at 10:30am were the cross-country mountain bike races for Men’s Open, Juniors A (for 17-18 year olds), Masters (35-44 year olds) and Super Masters (45+).  The elites faced five laps of the punishing full 3km circuit, with the other three groups of riders tasked with going around a by-now-nicely-churned-up course four times. 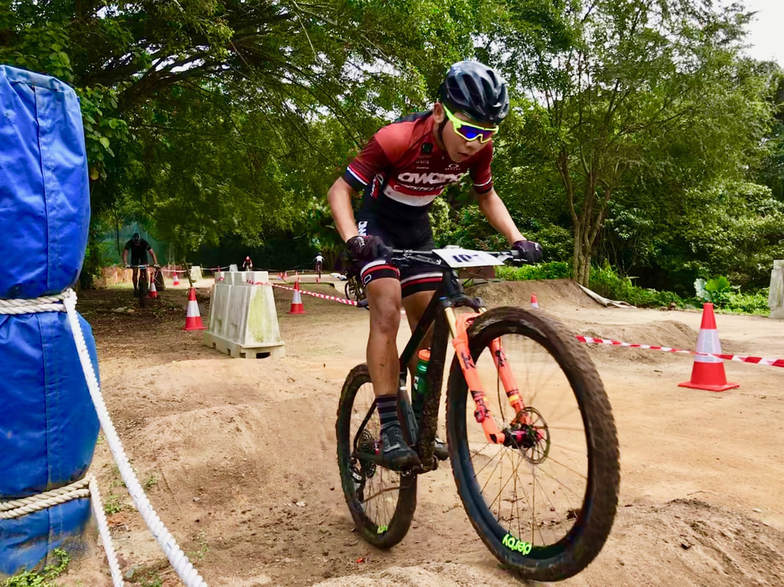 Juniors A winner Arfan Faisal may well have podiumed in the Elite contest had he raced in it
Awano teammates Junaidi and Riyadh were the undoubted pre-race favourites, but Anthony Brown (Cannasia-Absolute Black) kept the mentor-protégé duo honest throughout 2017 and was expected to be a threat again yesterday.

However, after just the first of the five laps, Junaidi and Riyadh had already separated themselves from the rest of the elite pack, with Brown crossing the start-finish line some 30 seconds back in third, accompanied by the leading Junior, Arfan Faisal (Team Awano).

Junaidi moved ahead of Riyadh midway through Lap #2, but fortunes can change quickly in mountain biking, and a dropped chain on one of the climbs forced Junaidi off his bike allowing Riyadh to power past and for Arfan and Brown to catch him too. 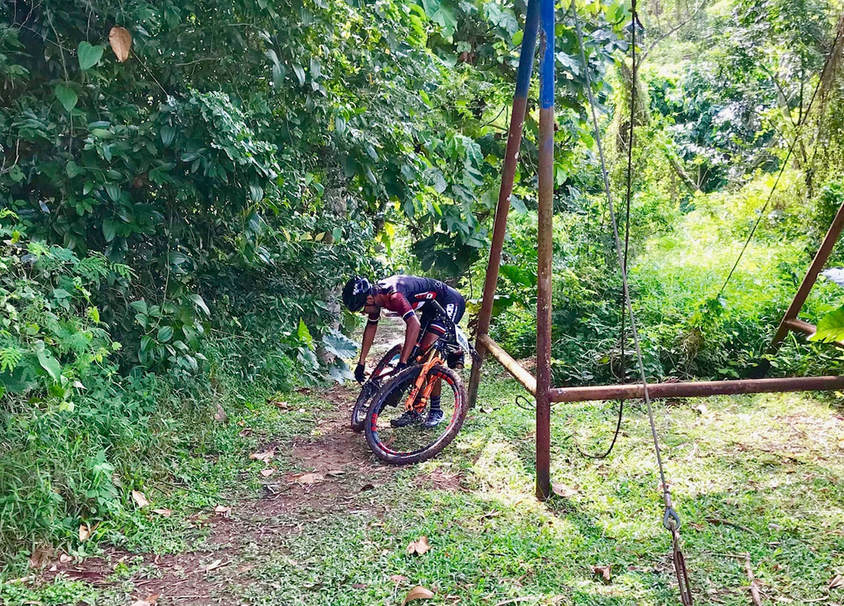 No panic from Junaidi as he patiently reattaches his chain
This gave Riyadh a 40-second lead at the start of Lap #3, but perhaps inspired by his wife giving birth to twins the day before, Junaidi then put in the fastest lap of the day as he pursued his young teammate. He made the catch not long into Lap #4.

Meanwhile behind, Brown was also battling the trail demons as a puncture ended his race early.

Riyadh and Junaidi took the bell together and with Brown now gone, the race for the first Jungle Cross spoils of the year was between them. The talk on the sidelines had the younger rider as favourite to take it, but it was Junaidi who emerged out of the ravine with a clear margin, and was able to roll around the last few hundred metres of grass at ease to take a stress-free chequered flag in a time of 1:15:46. 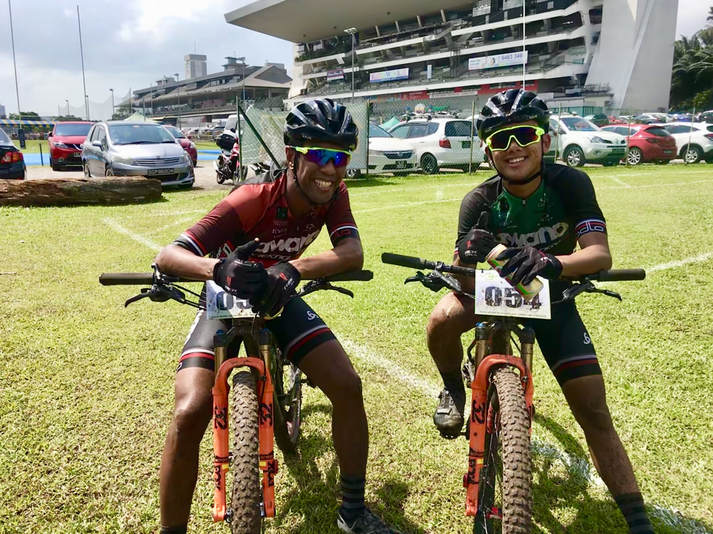 All smiles from Junaidi and Riyadh post-race
A lap before Junaidi took the elite win, Arfan had completed his Juniors A victory in style with a trademark wheelie over the line. His winning time of 1 hour, 1 minute and 41 seconds was the fastest across all the four-lap, long-course categories. Ahmad Safiy Rahudin (Team Awano) was the second Junior A, followed by Abu Hudzaifah Masnawi (Team Harding) in third.

The Masters race saw a dominant wire-to-wire victory from Benedikt Schneider (Matador Racing). After just losing out on the win in the sprint at the Masters contest at last week’s URA-CFS Share the Road criterium, Schneider made up for that agonising loss by claiming the Jungle Cross crown by a staggering 7+ minutes. The runner-up was Mohamad Khaniz Omar (Twenty9er Racing), with Nick Liang (Cannasia-Absolute Black) taking third. 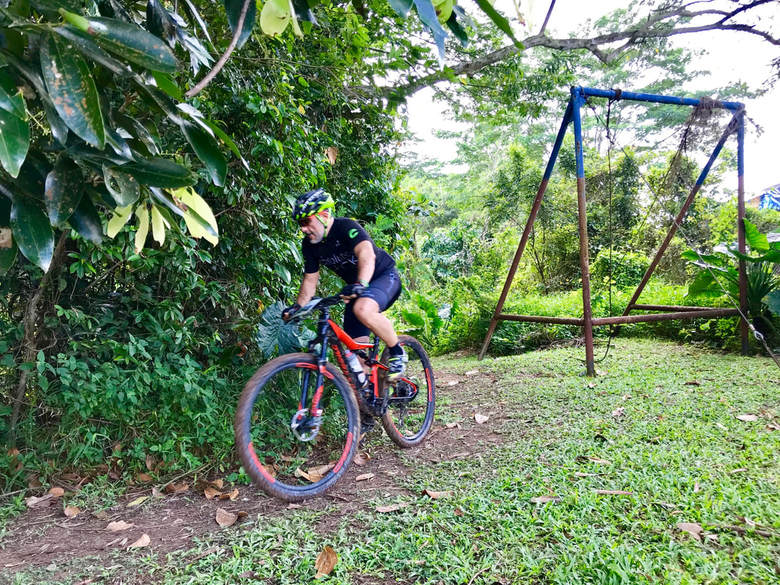 Super Masters champ Max Nanni looked smooth throughout
The Super Masters contest also had a dominant winner, with Max Nanni (Cannasia-Absolute Black) using his superior technical skills to power past and away from Dan Smith (Matador Racing) early in the first lap. Nanni went from strength to strength and won with relative ease in a time of 1:09:17. Smith was an equally comfortable runner-up, with Kim Kwee Ng (Cannasia-Absolute Black) completing the Super Masters podium in third.

Jungle Cross returns on April 15 for the second leg in the 2018 series. Just like yesterday's event, it will feature competitive racing for all sorts of bikes and abilities, including the popular kids skill session and race on the dedicated mini pump track. Visit www.cycosports.com for further details and to enter, and click on this link for full results of Jungle Cross I.