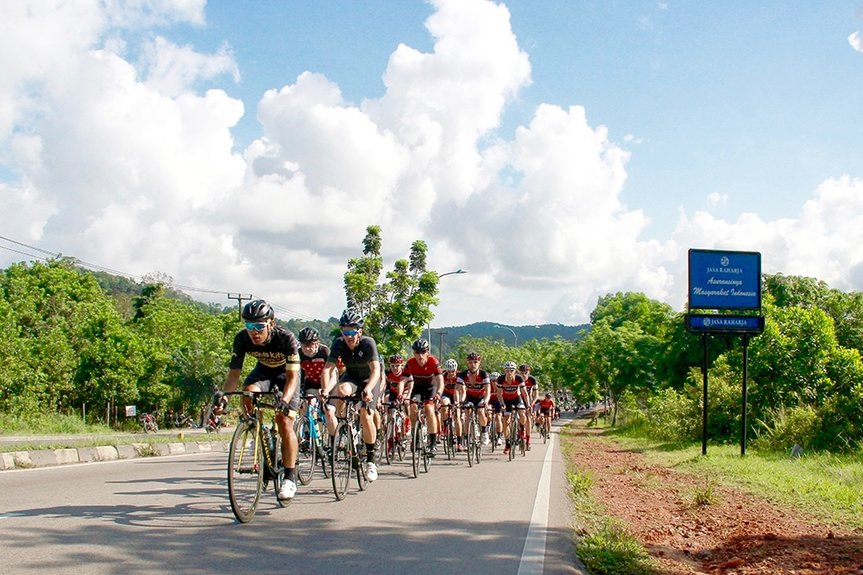 All photos courtesy of Cycosports
May 16, 2017
The 2017 Cycosports Tour de Barelang was as hard as any edition of the one-day classic but Kristján Snorrason (CyclingTraining.Asia) made the 130km sufferfest look easy on Saturday, soloing to a famous victory from 40km out in the elite Cat 1 contest. In the Women’s race, Andrea Ferschel (Anza Cycling) defended the title she won in 2016, beating Jeynelle Lee (Integrated Riding Racing Team) in the sprint up the iconic Barelang Bridge.

The majority of the 270 Tour de Barelang competitors arrived on the Indonesian island of Batam from Singapore via the two chartered ferries that event owner Cycosports traditionally hires. Joining the day-trippers at the main plaza in Batam City for the race start was a significant contingent of Indonesian riders. While the Cycosports races cater mainly to the Singapore cycling community, it’s heartening to see the growth in number of riders from Batam, Bintan and even Jakarta signing up.

The Tour de Barelang’s reputation has also reached Australia, with several groups of racers flying up from Melbourne and Perth for the 2017 edition.

The course
The first 12km of the race on the busy road from Batam City to the Barelang Highway is neutralised, but shortly after turning left onto the highway, the racing begins in earnest. The Barelang Highway is a 67km stretch of road that runs through an archipelago of islands, of which Batam is the biggest. A number of bridges connect the islands and give the event its well-known alternative name – the Batam Six Bridges.

While Batam is a thriving industrial centre, the rest of the islands visited by the Tour de Barelang are sparsely populated which means the well-paved road is light on traffic and perfect for a bike race. The road isn’t completely closed, but the local police do a fantastic job of keeping the riders safe from any on-coming traffic. 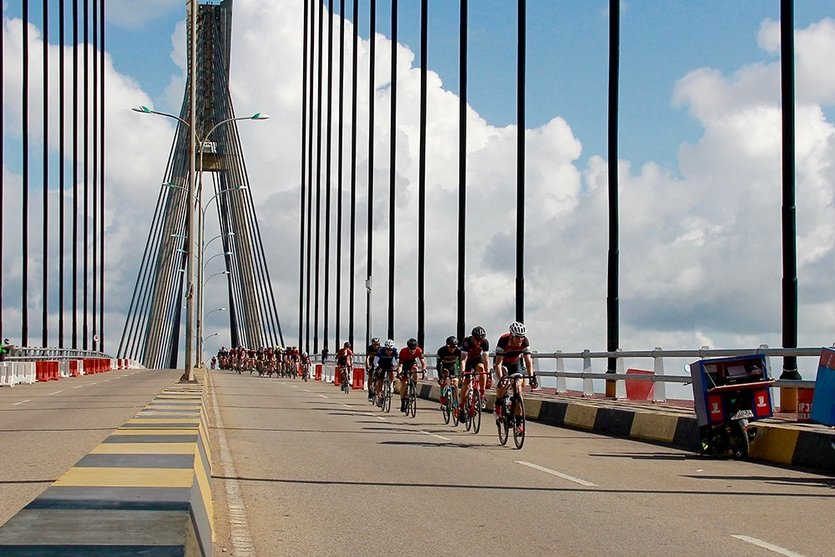 The competitors get a view of the finish on the Barelang Bridge on the outwards leg of the race
The Tour de Barelang course runs the entire length of the highway, before an abrupt U-turn at the 75km mark brings the riders back towards the finish line atop the Barelang Bridge, the last and biggest of the six spans.

Cat 1
The sun was already baking high in the equatorial sky by the time the Cat 1 peloton rolled out at 8:15am and with 130km and an endless string of rolling hills ahead, a tough day in the saddle was guaranteed for all.

A field of some 40 riders lined up for the elite race, with strong teams from the Specialized Roval Mavericks, Allied World Champion System, Integrated Riding Racing Team, Matador Racing and CyclingTraining.Asia, as well as smaller representation from the likes of Team Cycledelic, BikeLabz Racing, Guerciotti Racing Team and West Coast Riders.

The pace matched the temperature from the start, with non-stop bursts off the front keeping the riders on their collective toes. This pattern of attack and chase continued for most of the outward leg of the journey, with every little hill proving to be a potential launch pad for a salvo.

While there is no climb over 60 metres in elevation along the Barelang Highway, the course profile looks like a set of crocodile’s teeth, and the constant up and down gradually saps the strength of even the strongest of riders.

The undoubted strongest man was Snorrason and it was he who initiated the break of the day with some 70km still to go. Only five riders – Tim Clarsen and Jimmy Guardino (both Specialized Roval Mavericks), Will Pratt and Sophiane Behraoui (both Allied World Champion System) and Alexander Donger (Matador Racing) – could follow when Snorrason dispatched his first big punch of the day 15km from the turnaround point. 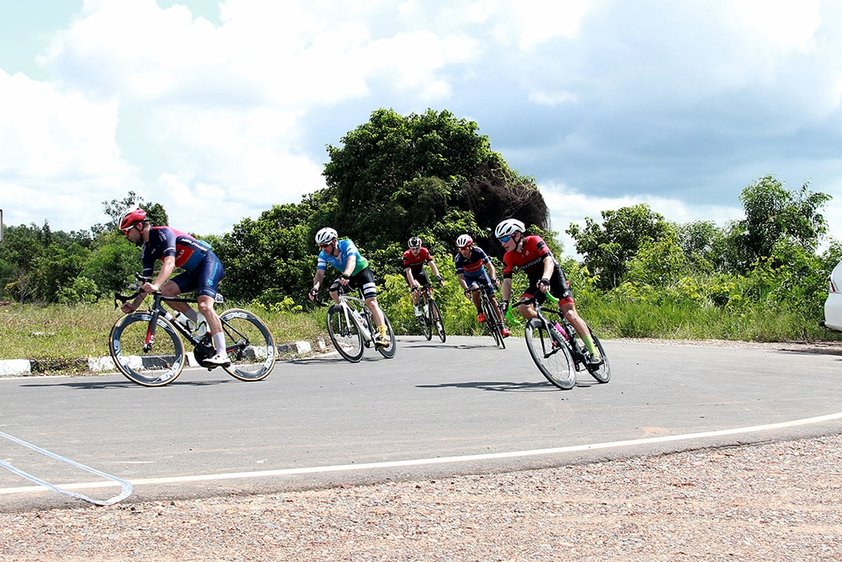 The Cat 1 breakaway rounds the turn with winner Snorrason at centre
The escapees quickly pressed their advantage and had opened up a gap of some 45 seconds at the turn. Brian Johnsen (BikeLabz Racing) made a valiant attempt to bridge, but he never made it and was reabsorbed by the peloton.

With four teams represented in the break, a cohesive chase was difficult to organise. Not helping matters was the fact that the hills on the return leg of the Tour de Barelang always feel nastier, and riders were being shelled on every climb.

It wasn’t much better up front for those trying to keep up with Snorrason, as the Aussie was pushing the pace and testing his companions on every little incline. Then, with about 40km still to go, the Aussie delivered the killer blow with an attack that nobody could follow.

The sight of the CyclingTraining.Asia man disappearing up the road seemed to sap the strength of those in his wake and soon the other escapees were spread thinly along the unforgiving Barelang Highway.

As the former members of the lead group wilted – accept for Donger – the chase bunch swept by them, but despite its numbers and the teams now having an impetus to chase, there was no sign of Snorrason up front.

The Aussie stayed strong for the last punishing hour and climbed alone to the finish line on the apex of the Barelang Bridge to take a famous victory. His winning time of 3 hours, 25 minutes and 17 seconds represented an average speed of 38.5kph.

Behind, trying to goad the bunch into a more concerted chase, 2015 champion Bastian Dohling (Specialized Roval Mavericks) pushed the pace with about 15km to go, but finding that nobody had gone with him, the German pressed on alone. Catching Snorrason was a task too far, but with 3km to go he suddenly saw the Matadors jersey of Donger.

Donger, though, was never really in danger of giving up the runner’s-up spot, a final position the young Briton thoroughly deserved for putting up the best fight against the indomitable Snorrason. He crossed the line some 100 seconds behind the champ, but 25 seconds ahead of Dohling in third. 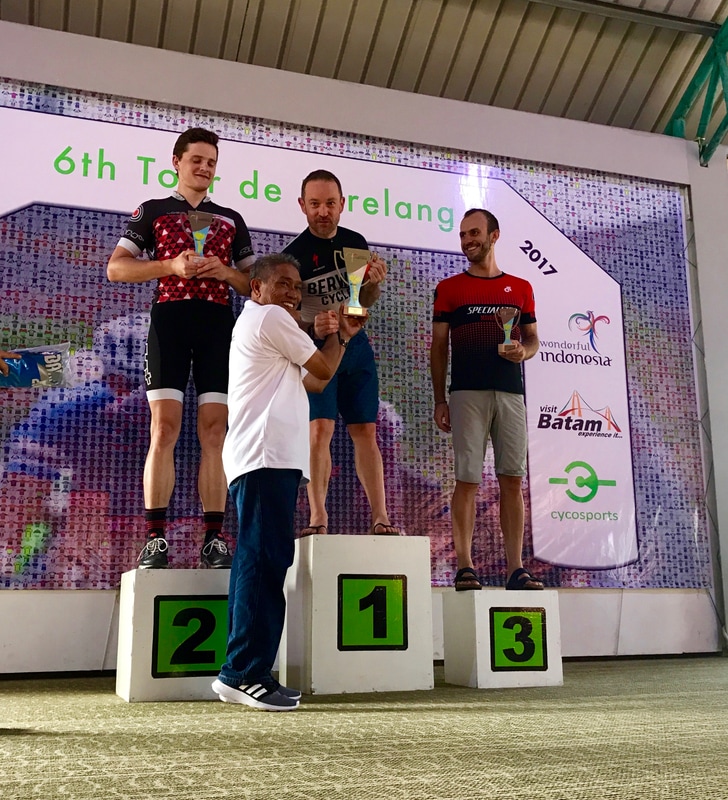 Snorrason seems happy on the top step
Helped by top 10 finishes from teammates Todd Sinclair and Mark Scoular, Snorrason and his CyclingTraining.Asia squad took the Cat 1 team prize, with the Mavericks in second and the Matadors third.

Snorrason revealed post race that he had felt good going into the Tour de Barelang but didn’t expect to win so convincingly.

“I had an inkling I had decent form coming into the race, but I didn’t think I had the form to do what I did. To have gone 40km from the finish solo is not what I expected and certainly not what I thought I was capable of. But yeah, I had good sensations, it felt great, and so that’s how it panned out,” he said.

The Melbourne-based Snorrason’s recalled how his last visit to the Tour de Barelang in 2015 didn’t quite go as well as this triumph.

“I kinda laughed to myself at about 30Ks to go as I was riding by myself because I was riding by myself the last time I did this race two years ago but the circumstances were different in that I was out the very back of the race and this time I was at the very front, so it was kinda bittersweet memories of how it was before but today was awesome,” he said.

“I love this race. It’s super tough, really hard, I love that Cycosports has races like this going on throughout the year. If I didn’t think it was so good I wouldn’t have brought three guys over with Melbourne with me to experience it.”

What did they think of it?

Cat 2
The Cat 2 race attracted a field of 120 riders and the huge peloton rolled out from Batam City some five minutes after the elites.

The big and brightly coloured Cat 2 bunch still smiling early in the day
The quality of the riders within the big Cat 2 group was evident by the damage done in the first half of the race, where the high pace and constant attacks saw the peloton whittled down to some 60 riders by the turn.

The attacks continued, and with those return hills hitting the tired legs hard, inevitably one move succeeded in making the decisive selection. David Watson (Arrivo Primo Singapura) was the catalyst, the former rugby-playing Scot finding himself off the front alone with about 30km to go.

A coordinated chase was eventually organised behind, but the sextet was moving too fast and the winner would come from within its ranks.
It was Sutton who proved the strongest, the Hong Kong-based Brit just outlasting Willyam, with Reynaert taking the final step on the Cat 2 podium in third.

Willyam took some consolation for missing out on the sprint, as his Sepeda Kita Cycling Team squad took the team prize, from Unfound CC in second and 4T2 Red in third. 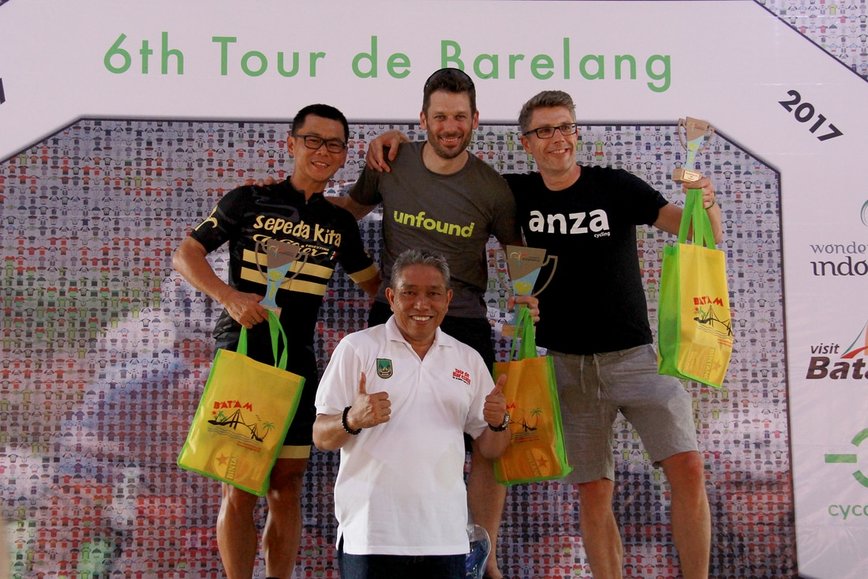 More podium smiles, this time Willyam, Sutton and Reynaerts
The Cat 2 winning time of 3:28:23 was only beaten by the first three riders in the Cat 1 race, which perhaps confirms that there are more than a few bandits lurking in the second tier at the Cycosports races.

The disparity in the field sizes between Cat 1 and Cat 2 is due to the lack of a race grading system in Singapore, meaning competitors self-seed themselves for the Tour de Barelang. Maybe Cycosports will need to coerce some of the stronger Cat 2 riders to make the jump to the elites.

Cat 3/Women
The final bunch on the road was another whopper, the big group made up of 100+ Cat 3 men and 15 Women.

The Wombats, Anza Cycling, Ascenders Team, the Barbarian, YGSK and ISSI Batam had the biggest Cat 3 teams and it was riders from those outfits that drove the pace at the front. Like in the earlier races, the heat and hills took their toll on the outward leg of the race, but the attrition rate was much higher, with less than 40 riders in the strung-out group that reached the U-turn first.

The turn proved to be the springboard for success, as one of the first men around it, Ben Stewart (Wombats), attacked with Ed Clarke, another Wombats rider. Clarke could only hold his teammate’s wheel for 5km or so, and once he was gone, Stewart put his head down and wasn’t seen again until the prize presentation. His time of 3:46:19 gave him a winning margin of some 3 minutes 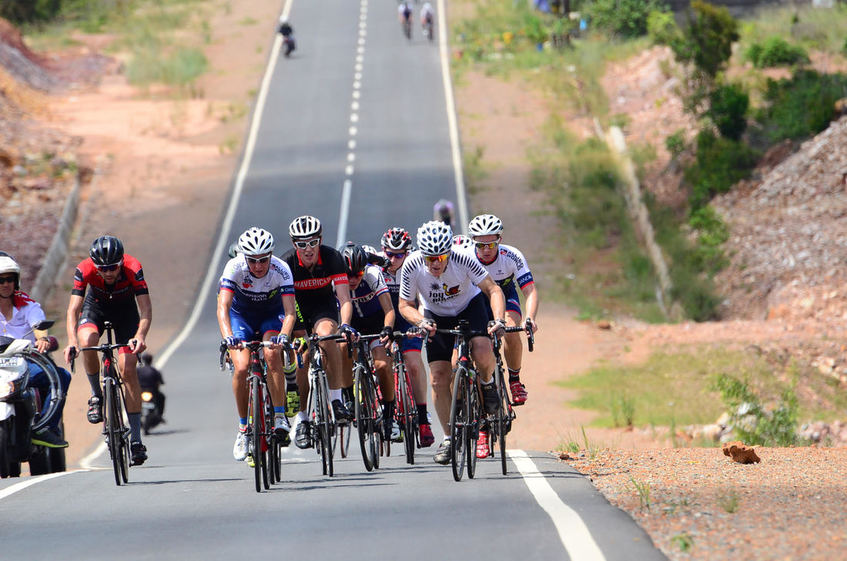 Women’s winner Andrea Ferschel (second left) driving the pace of the small Cat 3 peloton
Behind, the leg-sapping hills were hitting the peloton hard and soon it contained only 10 riders. The much-reduced bunch, which contained just two women, Ferschel and Lee, worked well together, and it wasn’t until just before the final kilometre that a real attack was made. But Marcus Hancock (The Cranks) paid for his bravery as the chasers caught up him halfway up the bridge with the finish line in sight. Leading that charge was local rider Dandy Z (ISSI Batam), the Indonesian winning the sprint for second place from Haakon Vestby (Anza Cycling).

In the women’s dual for the line, Ferschel won quite comfortably in the end dropping Lee on the bridge climb to take the chequered flag with a winning time of 3:49:18. Lizzie Hodges (Specialized Roval Mavericks) was the next women across the line to take third and the last spot on the podium.
Anza Cycling A took the combined Cat3/Women’s team prize, with YGSK Cycling Team 1 in second and Wombats 1 in third.

Full results of the 2017 Cycosports Tour de Barelang can be found at www.cycosports.com.

Cycosports will be back to Batam in August, with the third edition of the Nongsa Challenge, a hilly circuit race in the northeastern portion of the island.

(This article also appears in www.secondwindmagazine.com.)