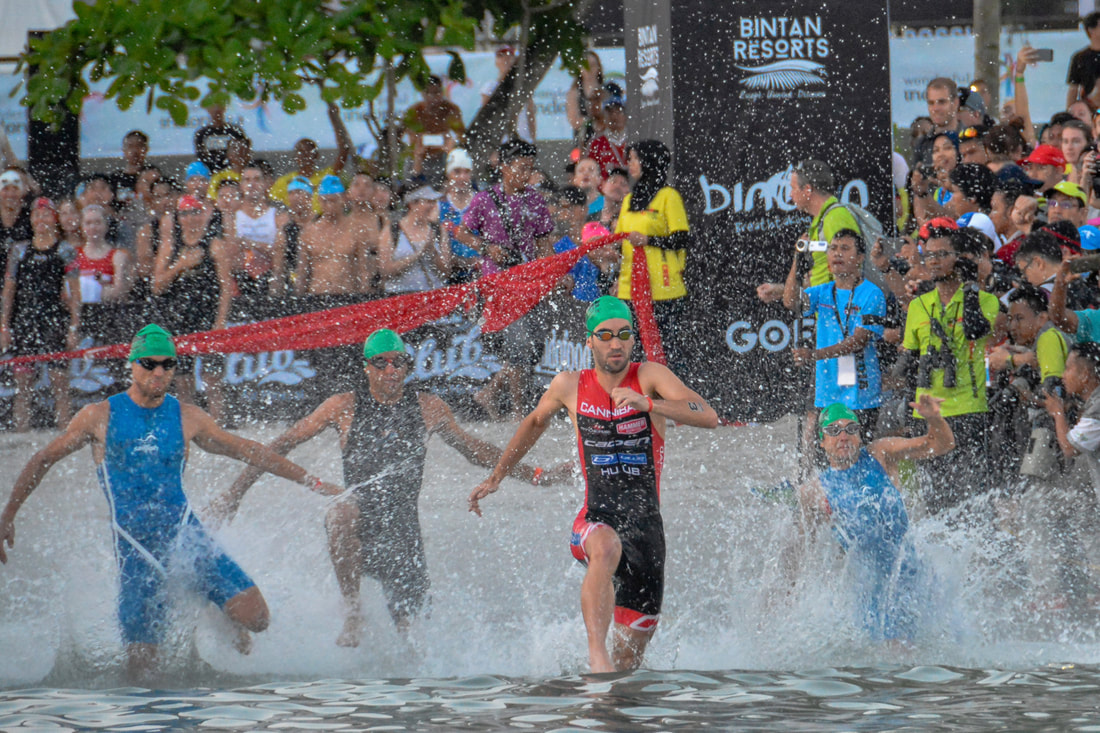 The male pros splash off the Ironman 70.3 Bintan (photo courtesy of MetaSport)
August 23, 2017
The 2017 Indofood Ironman 70.3 Bintan saw the eponymous Indonesian island showcase its tropical extremes as blazing blue skies and scorching temperatures in the morning were followed by an intense afternoon storm, but long-distance triathletes are tough nuts and a bit of weather didn’t stop the record 1,200-plus participants from putting on a dazzling show.

Heading the list of athletic excellence were Mike Phillips and Amelia Watkinson who respectively won the Men’s and Women’s Elite crowns in dominating fashion to clinch the US$3,000 top prizes and earn all-important ranking points for the 2018 Ironman 70.3 World Championships.

The fact that next year’s 70.3 Worlds are taking part at Nelson Mandela Bay in the glorious Eastern Cape area of South Africa also no doubt had a bearing in the significantly higher numbers of far-flung, age-group athletes who registered for the 2017 Ironman 70.3 Bintan, but it also didn’t hurt the just-three-year-old event that it was voted the best race in Asia in the 2016 Ironman 70.3 survey. On offer for the age groupers were 40 slots to South Africa.

A big factor cited in that sky-high customer satisfaction for the 2016 Ironman 70.3 Bintan was the still, clear waters of Lagoi Bay where the 1.9km swim took place, and it was to that pristine body that the male pros again splashed off the 2017 race on Sunday.

Phillips showed he meant business from the start by hitting the beach first after recording a blistering split of 23 minute and 49 seconds for the trapezoid-shaped, single-lap swim. The only other man anywhere near him was the Alexander Polizzi, the Aussie following Phillips into T1 just four seconds later. The gap to the third athlete out of the water David Mainwaring was huge, though, a full 90 seconds. 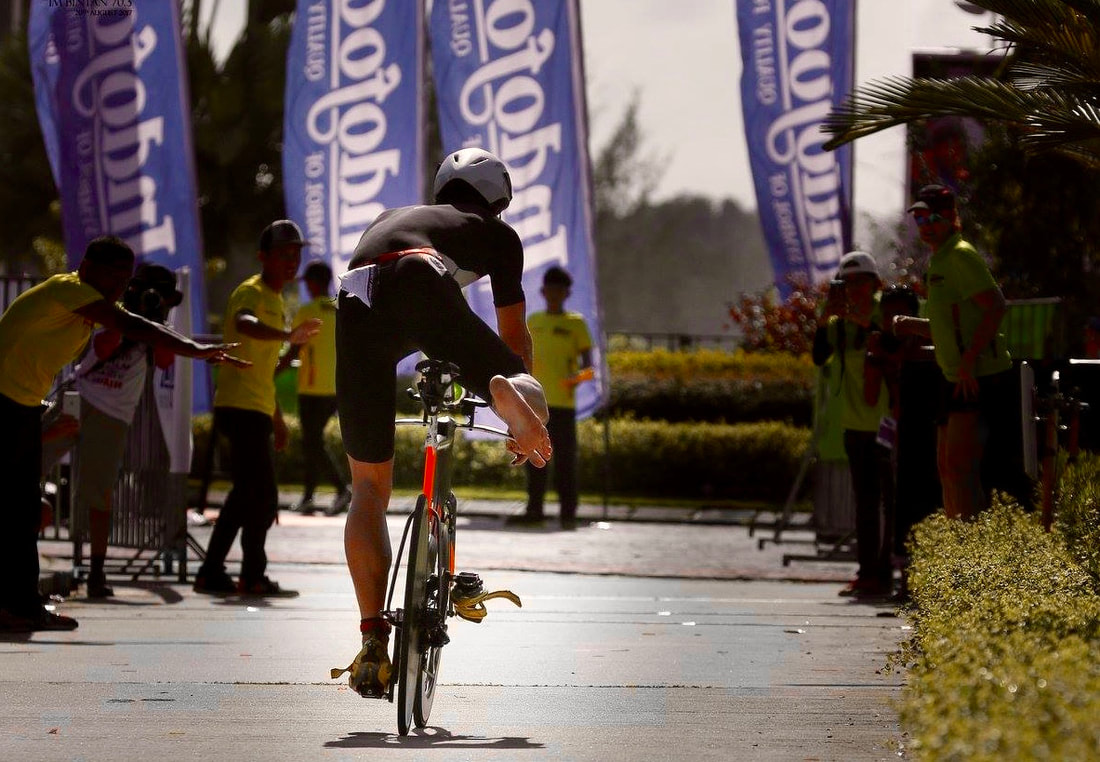 Runaway leader Mike Phillips dismounts ahead of T2 (photo courtesy of Run Mo Cap)
Polizzi couldn’t follow Phillips on the bike, however, and the Kiwi rode the entire 90km bike leg on all on his own. The sheer beauty of the tour through the northwestern section of Bintan might have made up for the lack of company, but it’s doubtful if Phillips was taking much notice of the scenery given the scintillating speed the Kiwi covered the bike course; his split of 2 hours, 6 minutes and 35 seconds represented an average speed of 42.3kph, a quite amazing pace for a rolling course that included some 700 metres of elevation.

Leading the fruitless chase was Domenico Passuello. The Italian wasn’t that much slower than Phillips on the second leg, but the 45-second deficit added to being some two minutes slower in the swim meant that he hit T2 over three minutes behind the leader.

Next off the bike was a pair of athletes; defending champ Fredrik Croneburg and Guy Crawford. But the Swede and the Australian were already some six minutes behind and it would have needed a spectacular collapse from both Phillips and Passuello for either of the chasers to have any chance of the win.

That certainly didn’t happen to Phillips who took to the new-look run course guns a blazing. The runners were this year set two laps of a circuit still largely centred on the Lagoi lake, but instead of three complete laps of the lake, the 2017 version featured a long out-and-back section that allowed the athletes to keep tabs on each other.

For Phillips, this presented him the opportunity to gauge his advantage midway through the first lap. He’d have seen it was significant and no doubt spurred him on as he subsequently increased his lead by running the first 10.5km some 45 seconds faster than Passuello. With the sun now scorching down hard on the scenic but completely exposed run course, the big lead he had built allowed Phillips to take his foot off the gas a little on the final lap as he strode to a comfortable victory. 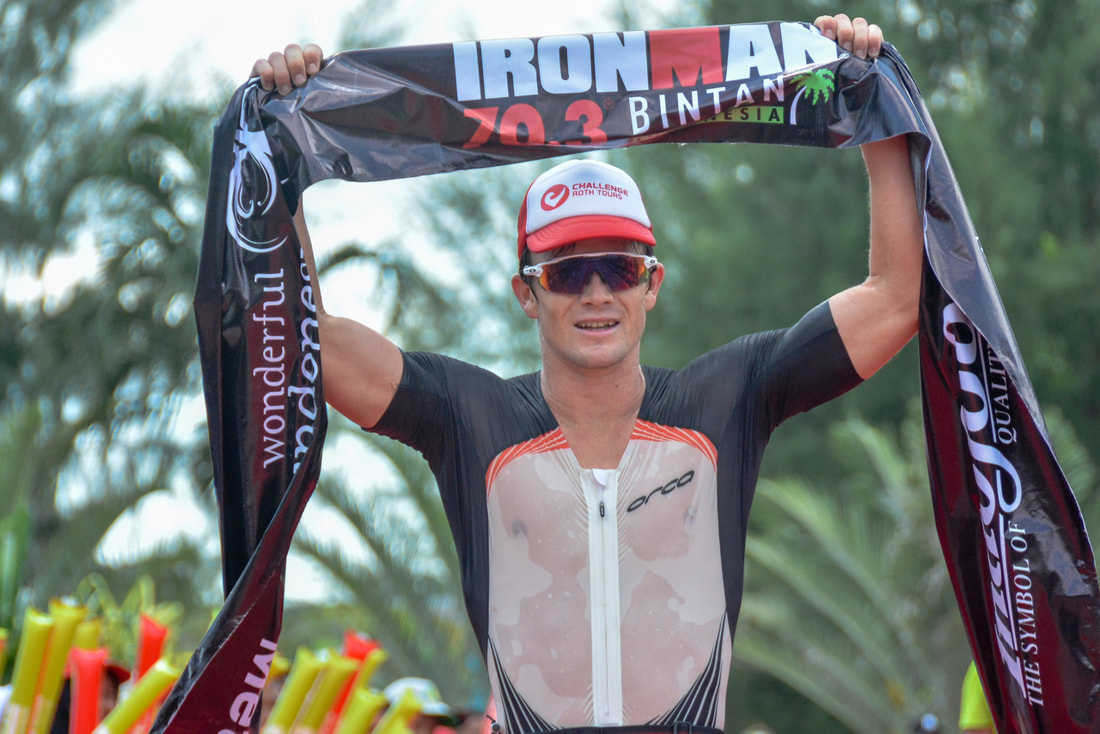 The champ – Phillips crosses the line (Photo courtesy of MetaSport)
A 1:21:44 split for the half marathon gave Phillips a total winning time of 3:54:37. Going under four hours in such brutal conditions meant the Kiwi was a very worthy winner.

Passuello duly finished second, some two-and-half minutes behind, while Croneborg ran strongly to clinch yet another visit to the Bintan podium.

Women's Elite
The pro women strode into the shallow water five minutes after their male counterparts and like in the first wave, two swimmers quickly pulled away from the rest. Laura Dennis of Australia was the first to hit the beach and head into T1 after covering the 1.9km in 26:23, closely followed by Watkinson. Defending champion Kate Bevilaqua was the third-fastest swimmer, but the Aussie was two minutes behind the leaders.

Onto the bike leg, and the similarities to the men’s pro race continued with one of the swim leaders quickly pulling away from the other. This time it was Watkinson who was putting out the biggest watts, and she had already built a lead of over two minutes by the first time check at the 22km mark. 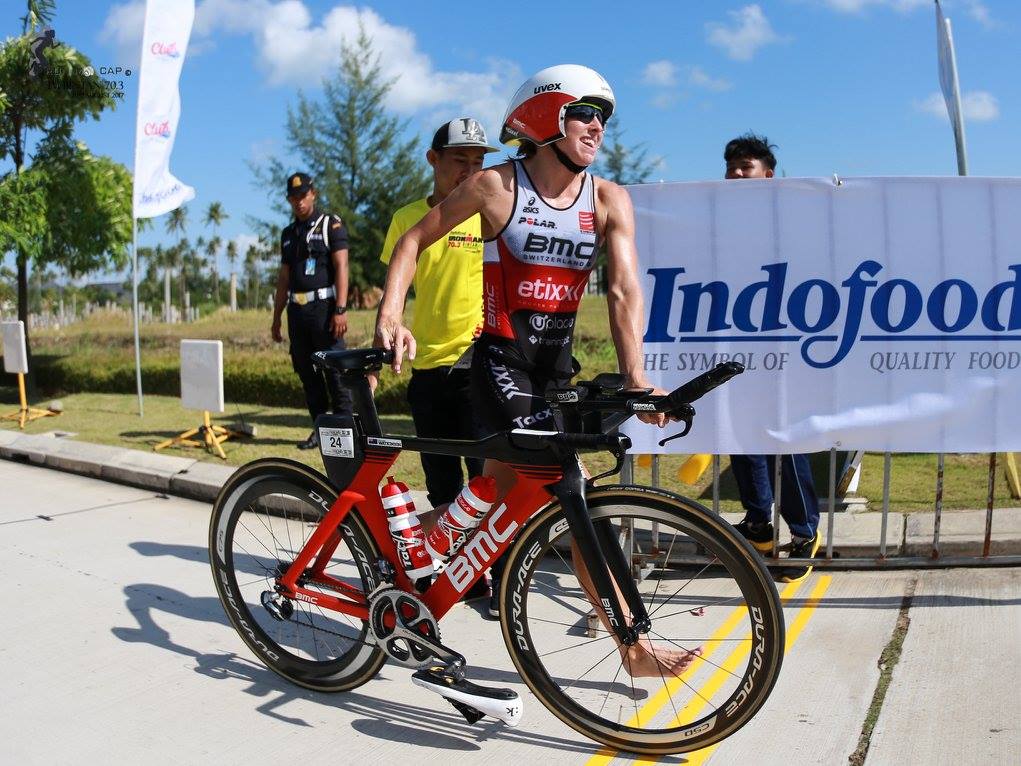 Watkinson can afford to smile after smashing the bike leg (Photo courtesy of Run Mo Cap)
The on-form Kiwi (she also won Ironman 70.3 Philippines two weeks earlier) powered around the rest of the 90km course on her own and by the time she reached T2 she had a nine-minute advantage over Dennis. Third to finish the bike was Anna Eberhardt of Hungary, who after a relatively poor swim had charged through the field on the bike to be just a minute behind Dennis heading onto the run.

Up front, Watkinson may have had a big lead, but she didn’t let up and completed a dominating win by delivering an impressive run split of 1:29:23 for the half marathon to give her a total winning time of 4:20:54. Her 21.1km split was not only the quickest among the women by two-and-a-half minutes, it was the seventh fastest across both genders.

Behind, Dennis was suffering on the run, and by the end of the first 10.5km both Eberhardt and Bevilaqua had passed her. The podium order didn’t change on the last lap, with Eberhardt comfortably clinching second place, but she was a whopping 12 minutes slower than the rampant Watkinson. 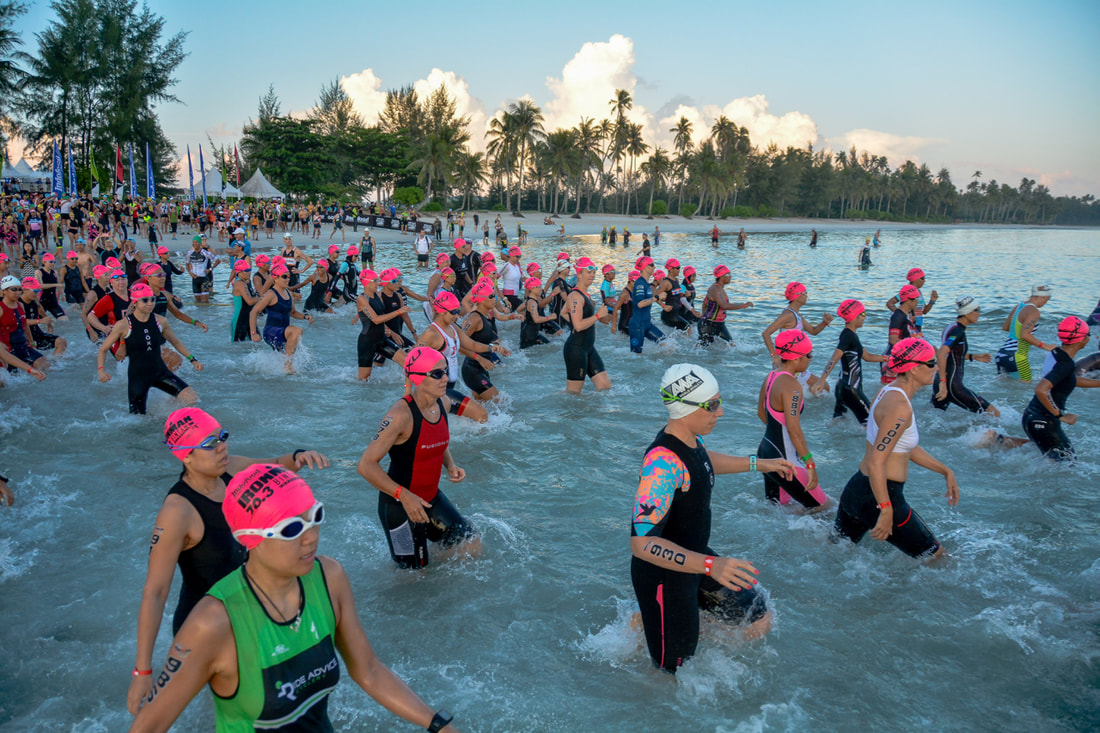 A large group of age group women registered for this year’s race (Photo courtesy of MetaSport)
The pros may be the fastest athletes, but they only make up a small percentage of the total field in any Ironman 70.3. Some 1,000 individuals took part in the 2017 Ironman 70.3 Bintan, with another 200 plus athletes in the relay field. Of the 71 teams who entered the relay race, an incredible 44 came from one triathlon club, the Sugarcanes.

With Singapore being just a short ferry ride from Bintan, Singaporean athletes were once again were the largest group in percentage terms, but the Ironman 70.3 Bintan’s growing reputation drew participants from all over the world. Noticeably from a look at the pointy end of the age group results was a strong cadre of triathletes from Australia. In addition to the Aussies, many South Africans were also in Bintan chasing an early qualification at a home world championships, and some top Europeans were also on start line. Closer to home, the Philippines also sent a big contingent of racers.

Oliver Godart of Luxembourg was the pick of the age groupers, finishing fourth overall on his way to winning the 40-44 category and beating five male pros in the process. Indeed, his time of 4:02:40 was only four seconds slower than the third-placed pro Croneborg.

The leading female age grouper was Deanna Fuller from Australia, with a time of 4:58:13. 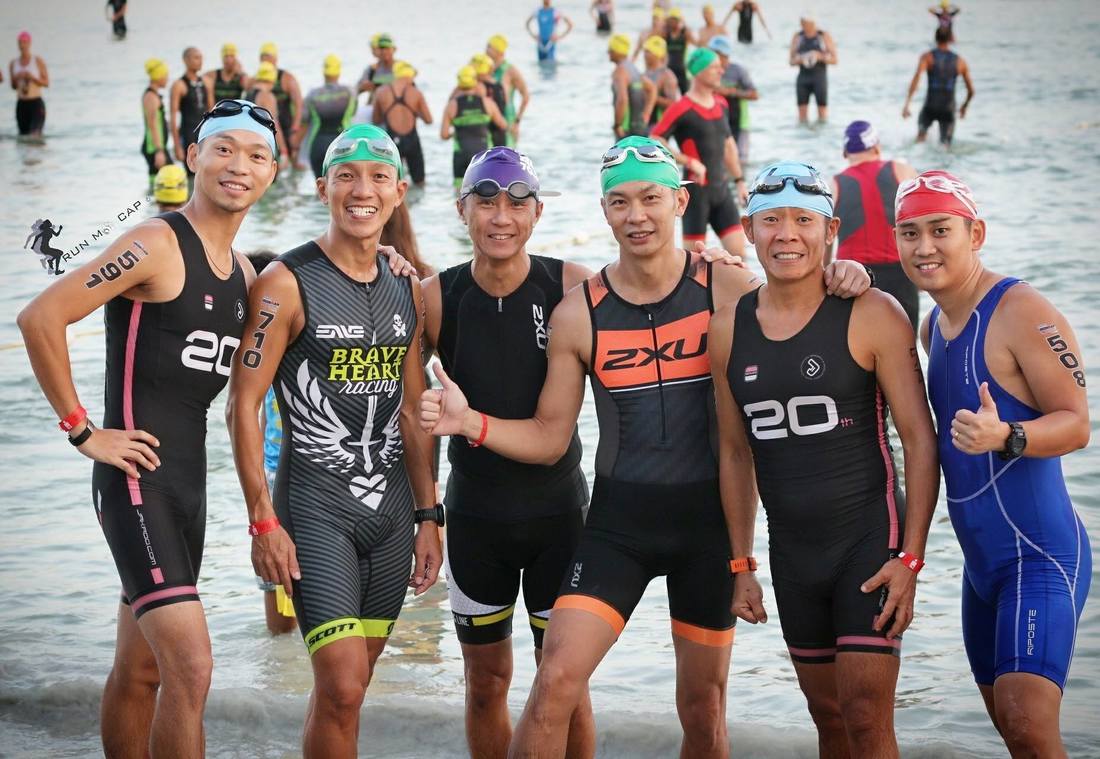 Age groupers are the heart and soul of Ironman 70.3 triathlon (Photo courtesy of Run Mo Cap)
For the vast majority of the 1,200-plus athletes, though, the race was about personal satisfaction rather than podium glory, and many of them grinding it out as the clock struck midday would have been happy when the sun disappeared behind some dark clouds and a shower of rain provided some relief. However, that light rain soon turned into a proper tropical storm, so extra kudos to those that stuck it out and finished the job.

This report was also published on www.secondwindmagazine.com.
Proudly powered by Weebly